A Recipe for Porchetta, an Insanely Fragrant Roast Pork from Italy

Ariccia, Italy. Population 20,000. A ‘Roman Castles (Castelli Romani)’ commune located 24km southeast of Rome in the central region of Lazio. Home of fraschette (local wine taverns) and Italy’s capital of pork. So intrinsically linked are pork and Ariccia that it would be safe to venture that there is no pork without Ariccia and no Ariccia without pork.

Porchetta has historically been associated with the central block of Italy, with Lazio, Abruzzo, and Umbria each laying claim to the glorious roasted pork dish. But the debate of its origins aside, porchetta is a dish enjoyed all over Italy, from Veneto in the north all the way down to Sicily in the south.

In Ariccia, porchetta is typically prepared with a one-year-old sow. The weight of the hog should range between 27kg to 45kg, never more than 50kg. Porchetta preparation begins by first removing the innards and the bones of a pig. Once hollowed out, the pig is aggressively seasoned from the inside with salt, pepper, and aromatics like garlic and fresh rosemary. The seasoned pig is then left to cure for at least six hours before being roasted–traditionally–in a wood-fired oven. Depending on the weight of the pig and oven temperature, the cooking process can take up to seven hours. 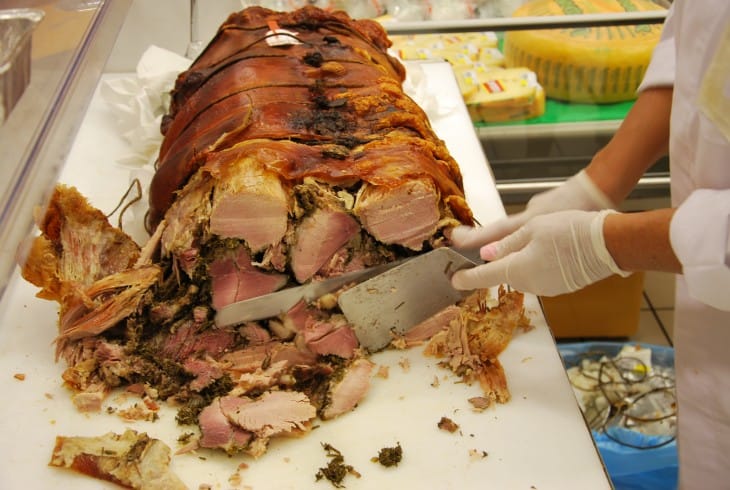 The beauty of porchetta lies in its contrasting textures: juicy tender meat, pale pink and fragrant from the herbs, and a buttery layer of fat nestled under a bubbly crackly skin which–when done right–remains perfectly crispy days after exiting the oven.

A crucial step of porchetta preparation is tying the pig with twine, which not only helps keep the meat compact and in shape, but also minimizes moisture loss during the slow cooking process. Once out of the oven, the roast pork is left to rest and cool before being sliced. 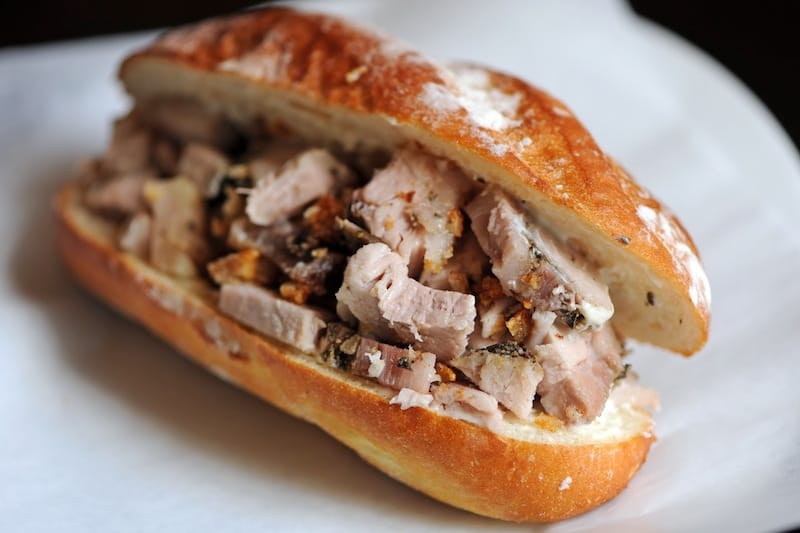 Although porchetta can be served hot as a ‘secondo piatto’ with accompanying ‘contorni,’ it is often a popular street food and bar grub in many parts of Italy. In Ariccia, ‘fraschette’ are an integral part of local life. Fraschette (plural of fraschetta) are wine taverns found exclusively in the region of Lazio, many of which are renovated wine cellars that date back to medieval times.

In the old days, fraschette served as roadside rest areas and inns for traveling peddlers in need of refreshments and basic accommodation. Fraschette offered wine from nearby vineyards and simple snacks like cheese, olives, and porchetta panini. The long tradition of serving porchetta sandwiches at these distinctly local taverns still lives on to this day. 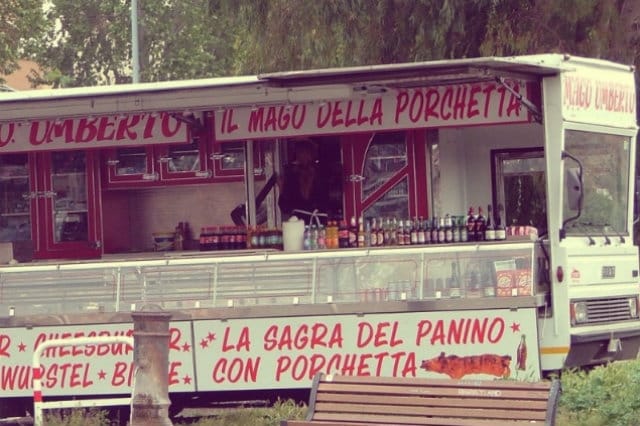 Porchetta is also an important part of Venetian cuisine. In the city of Treviso in Veneto, porchetta is a popular street food, sold from mobile food trucks. Treviso-style porchetta is typically prepared with a whole leg of pork with the bone intact which has been seasoned with salt, pepper, rosemary, sage and white wine.

Other regional variations exist as well. For instance, porchetta from Umbria is stuffed with the chopped innards of a pig, mixed with lard, garlic, salt, and plenty of pepper and wild fennel.

In Sardinia, ‘porceddu’ (the local term for porchetta) is prepared with a suckling pig (around 40 to 60 days old) that weighs between 6 and 10 kilograms. The young pigs are eviscerated and seasoned simply with salt before being hung vertically and spit-roasted over a fire fueled by juniper and myrtle wood.

Every year, since 1950, Ariccia has been hosting the annual ‘Sagre della Porchetta,’ a festival dedicated to the whole pig roast. Tens of thousands of porchetta sandwiches are consumed over the duration of the food festival, which draws lovers of pork from all over Italy. On June 14th, 2011, the porchetta of Ariccia even went on to obtain the EU recognition as a product of protected geographical indication (PGI). 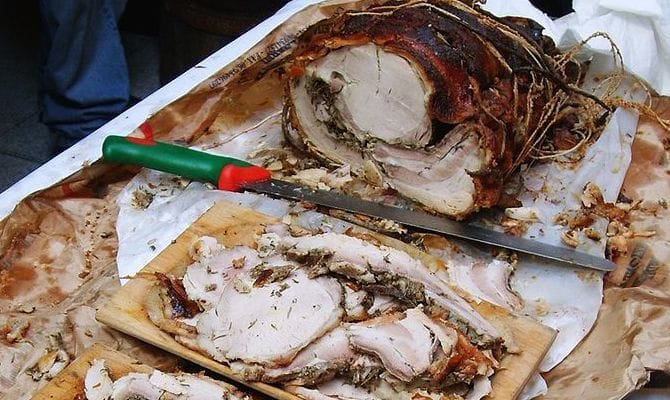 Outside of Italy, porchetta is a festive dish, enjoyed at home in many parts of the world. But as most of us do not have the means to pull off a whole pig roast at home, most of the porchetta recipes available out there are the simplified versions.

Steven Kwon, executive chef at Seoul-based catering company ‘Crave,’ recently added porchetta to the company’s year-end catering menu. The Korean-Canadian chef, who returned to his native Korea earlier this year after his decade-long stint with the Toronto-based Oliver & Bonacini Restaurants, tasted his first-ever porchetta sandwich at ‘Porchetta & Co.’ in Toronto. He says it was love at first bite.

Kwon uses two cuts of pork to make his porchetta: pork belly and pork shoulder. As any lover of porchetta will tell you, the crispy pork skin is everything. To achieve the ideal crispiness, Kwon advises leaving the log of rolled-up pork uncovered in the fridge between 24 to 48 hours. This vital and—admittedly—time-consuming process dries out the pork skin which results in the level of crispiness you want in a porchetta. He also recommends rubbing down the pork skin with lemon juice (orange juice works, too) several times a day. What this does is it allows the acid to break down the protein that prevents the tough pork skin from hardening during the slow cooking process.

Fresh herbs are preferable, but they can be substituted with dry. Because dry herbs are generally more potent and concentrated, you’ll need less — typically one third the amount of fresh.

The following is Kwon’s recipe which yields fantastic results even with a standard home oven. As you can see, you will end up with enough porchetta to feed a party – the perfect excuse to throw one!

Tools you will need:

Gloves (to protect the hands when tying the twine)

For the dry rub:

For the wet rub:

Place pork belly on a tray, skin-side up. Wipe the surface of the skin clean with a dry kitchen towel.
Run a knife down the skin of the pork diagonally at 2cm intervals, then run it across the skin to form a cross-hatch pattern. 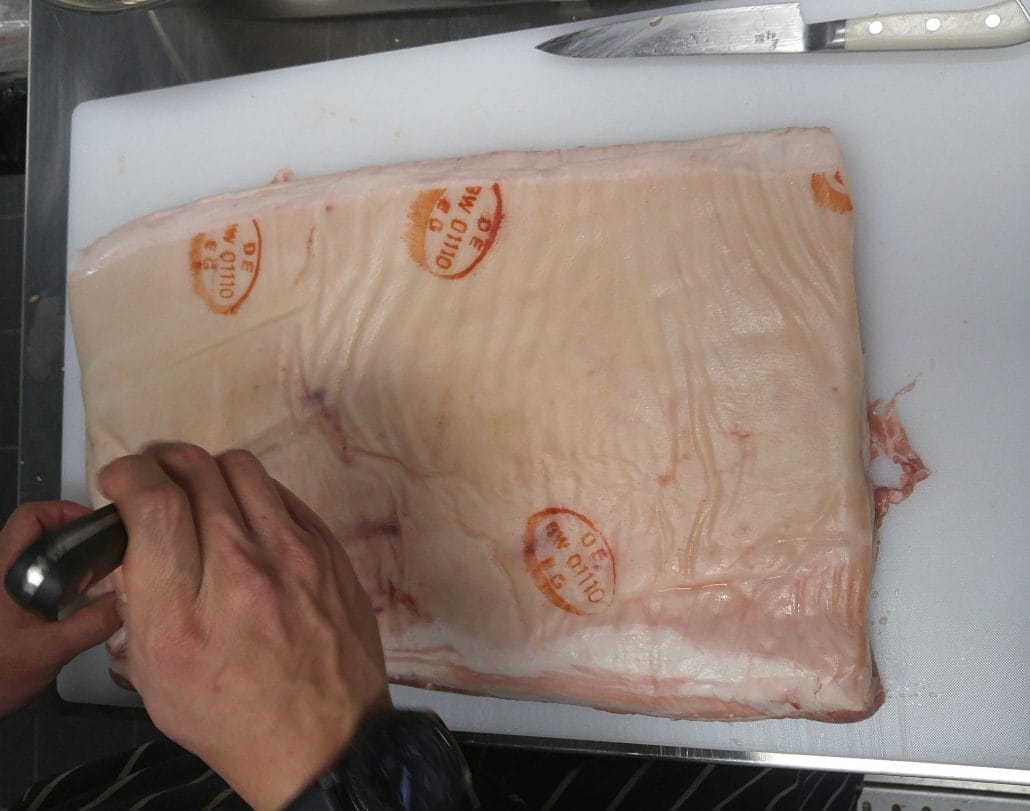 Using a meat perforator (or the tip of a sharp steak knife), pierce the skin all over, evenly. 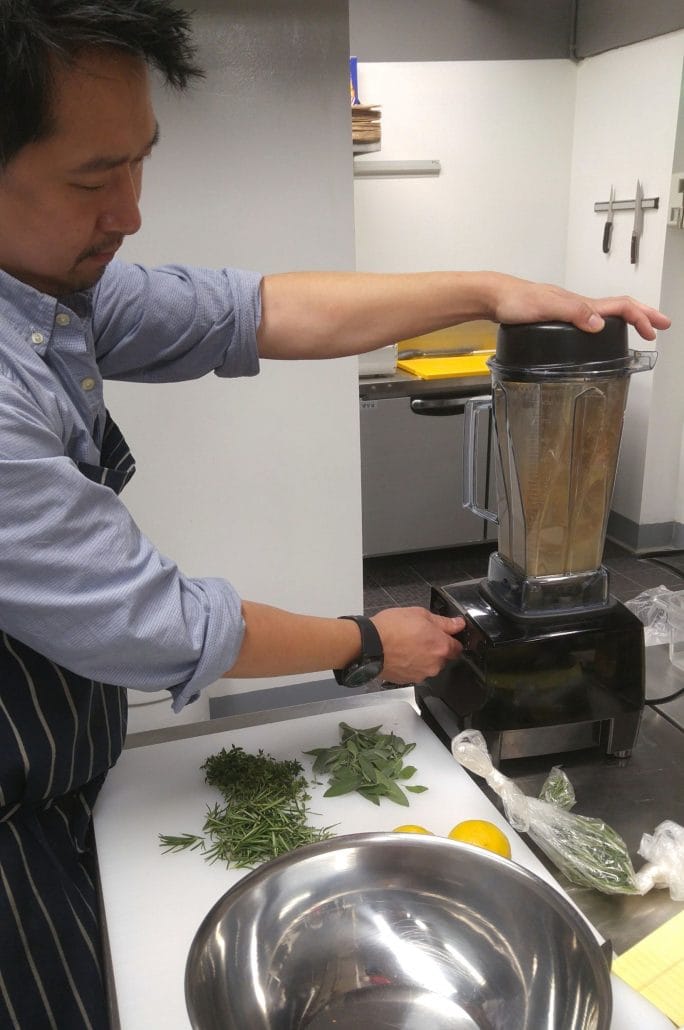 Finely blend salt, peppercorns and chili flakes together in a blender. 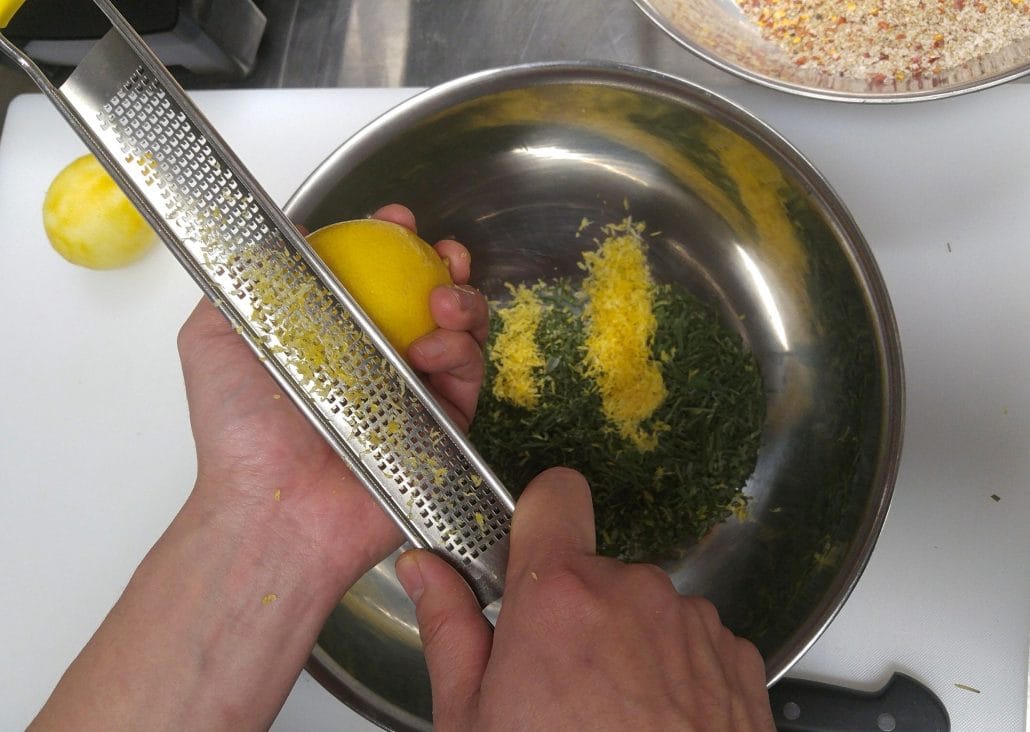 Flip pork belly so the skin is facing the cutting board. 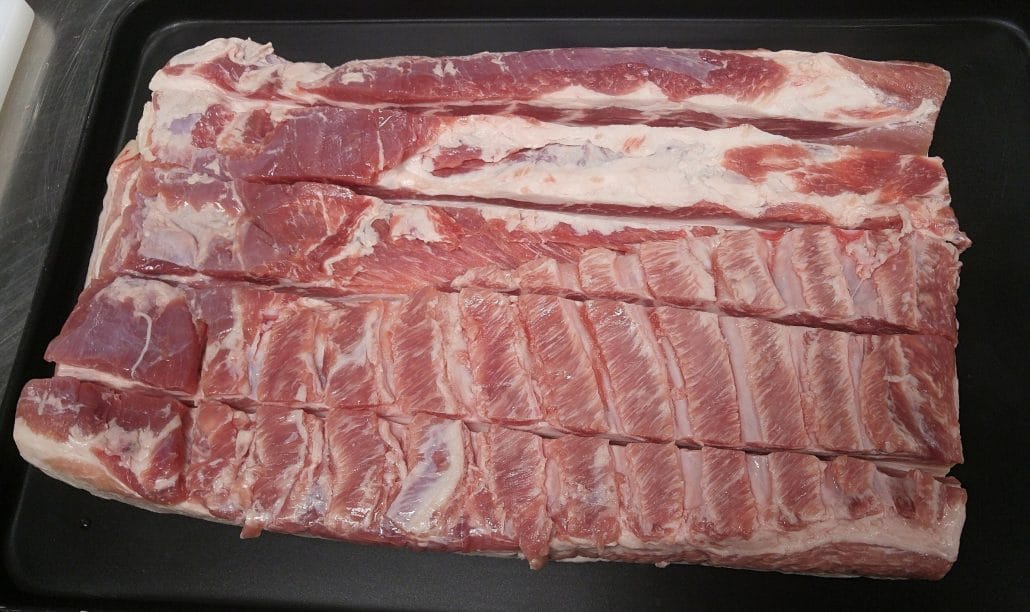 Run a knife down the meat at 5cm intervals. Score deeply, but make sure the knife doesn’t cut through the layer of fat.

Sprinkle a generous amount of the dry rub onto the meat. Using your hand, rub the mixture all over the meat and between the crevices. 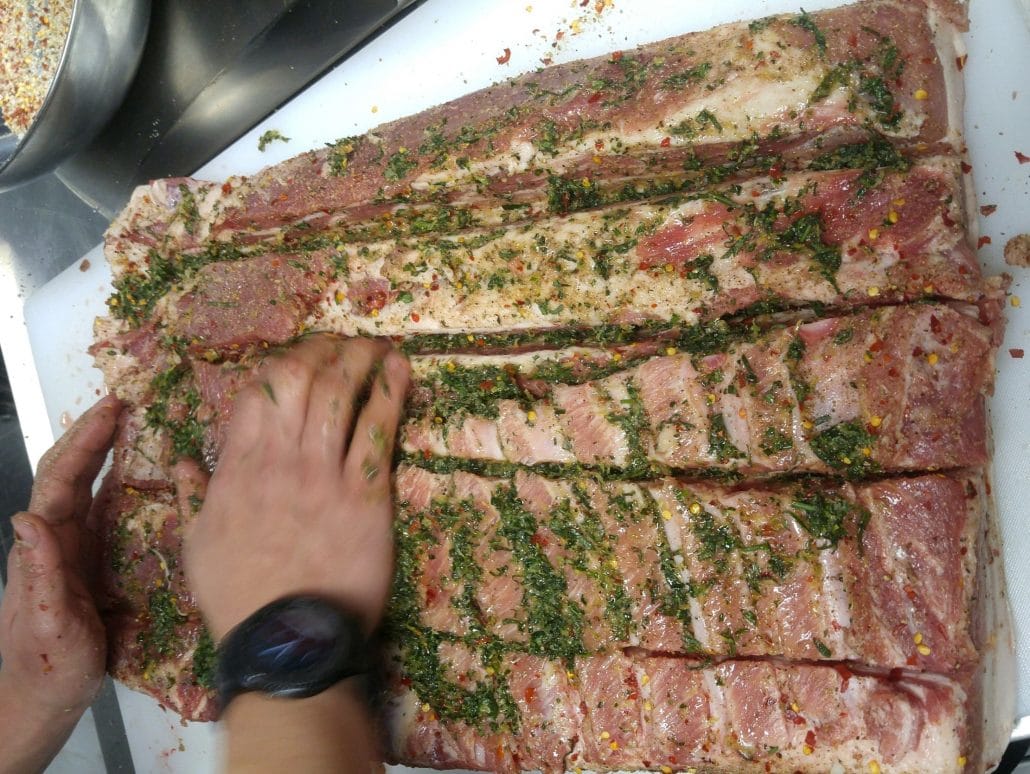 Once the meat has been coated with the dry rub, slather the wet rub all over the meat. 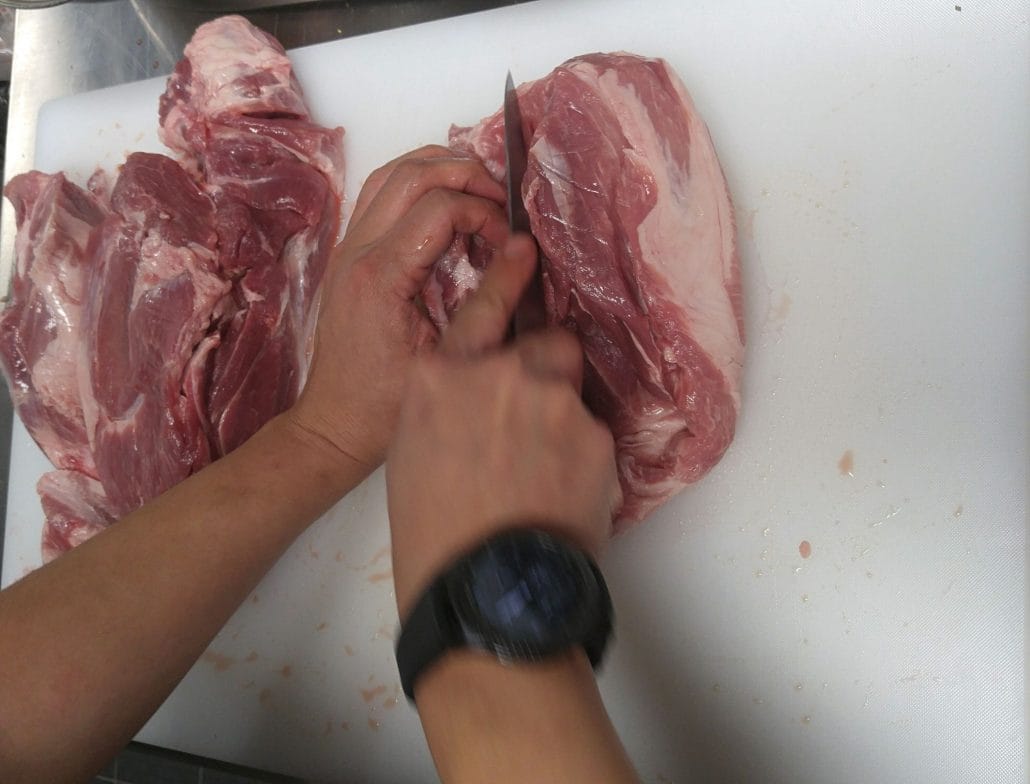 Coat the pork shoulder with the dry rub. 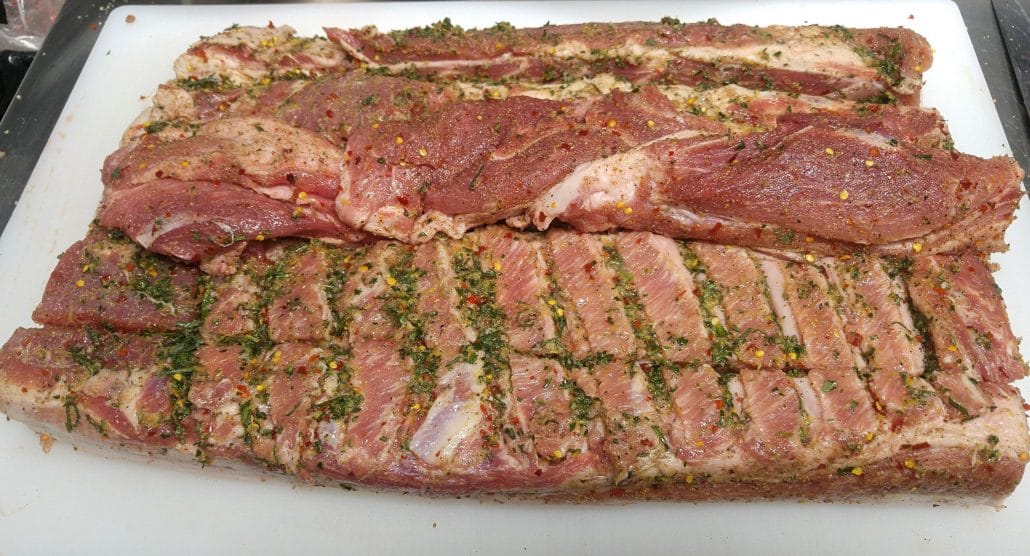 Place the pork shoulder, midway on the pork belly. 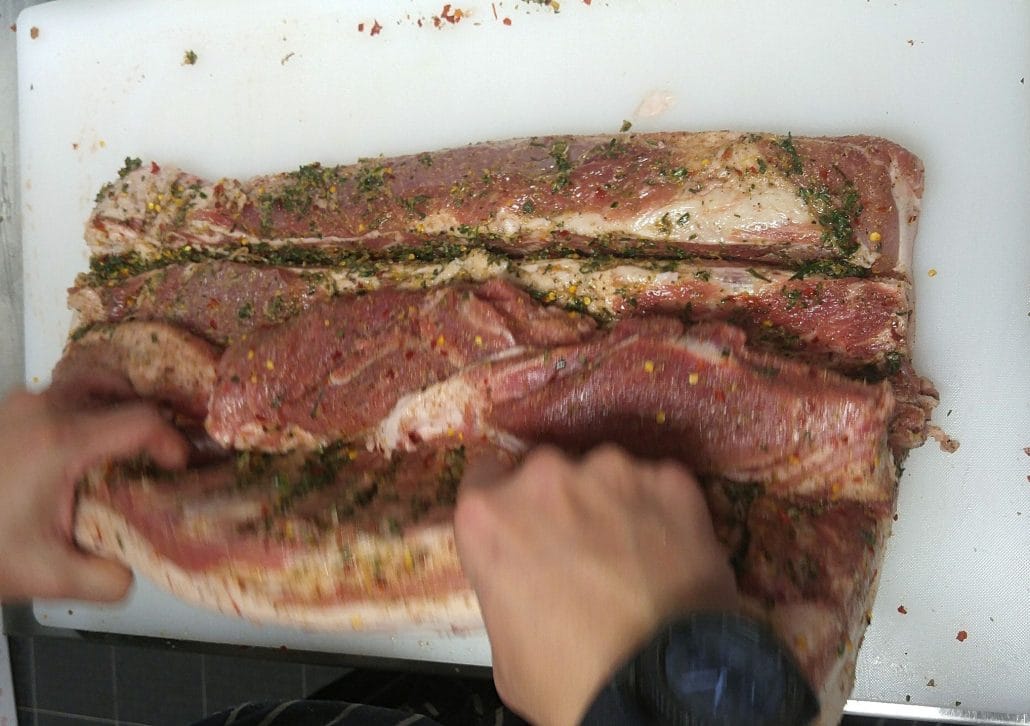 Roll the pork belly as tightly as possible, minimizing cavities inside the log. 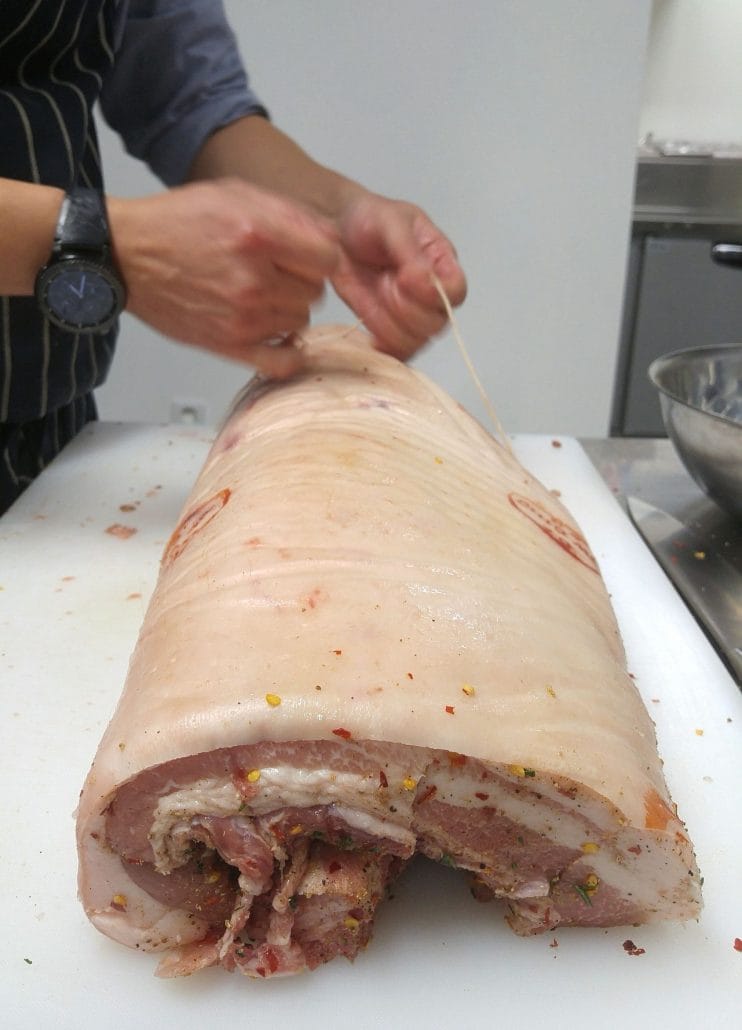 With gloved hands, tie one end of the log with twine. 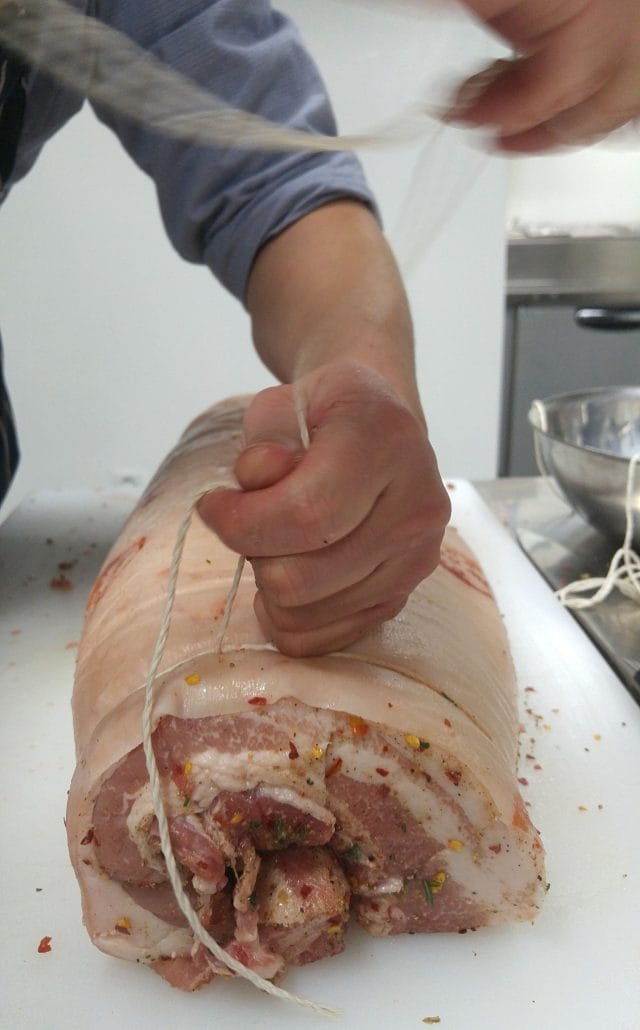 Tie the other end of the log as well. 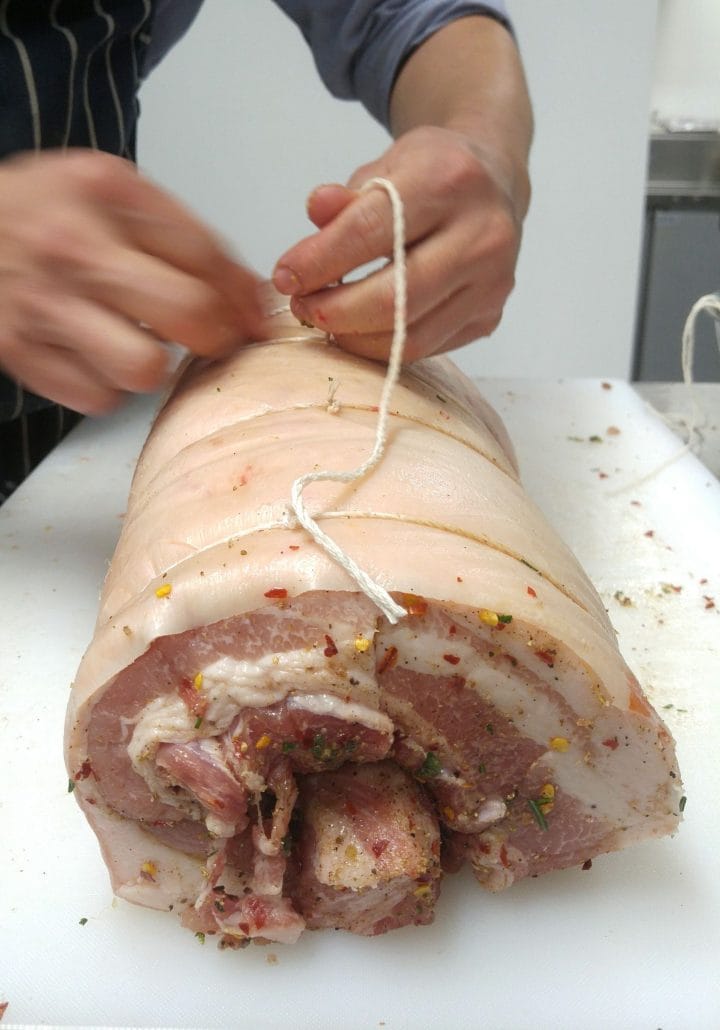 Tie the entirety of the pork log at roughly 4cm intervals.

With a dry kitchen towel, wipe the skin clean. 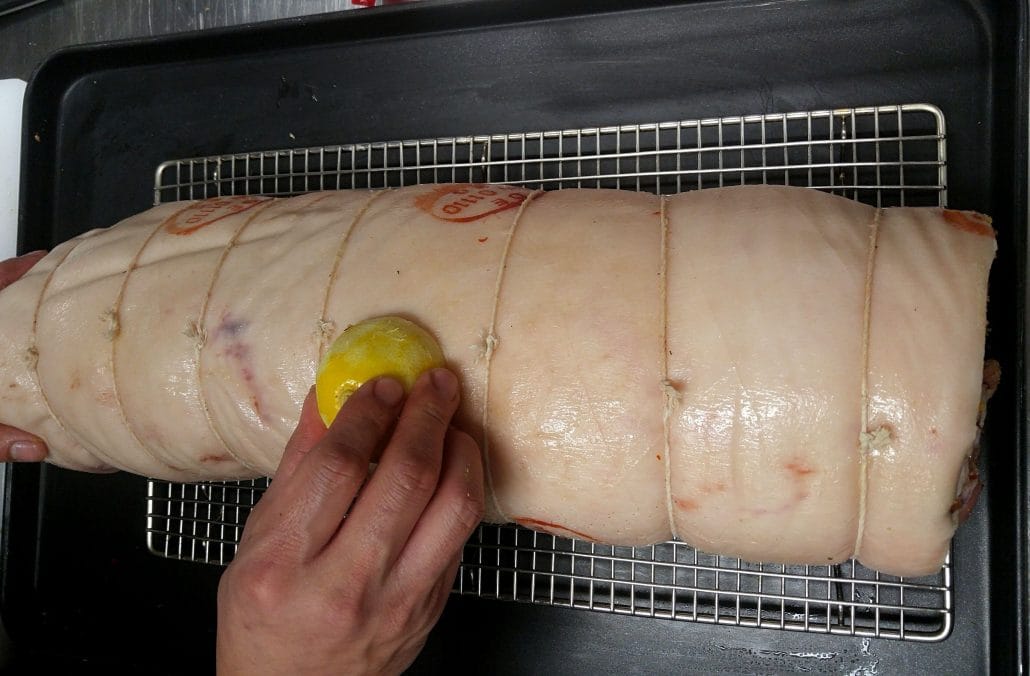 Cut a lemon in half and rub the cross section all over the skin.

Transfer the pork onto a clean tray and leave it in the fridge for at least 24 hours, rubbing the skin down with lemon several times a day.

Turn down the heat to 140 °C and cook for 20 to 30 more minutes. If you are unsure whether the pork is ready, try the thermometer test. A reading of 62 °C at the center means the porchetta is done. 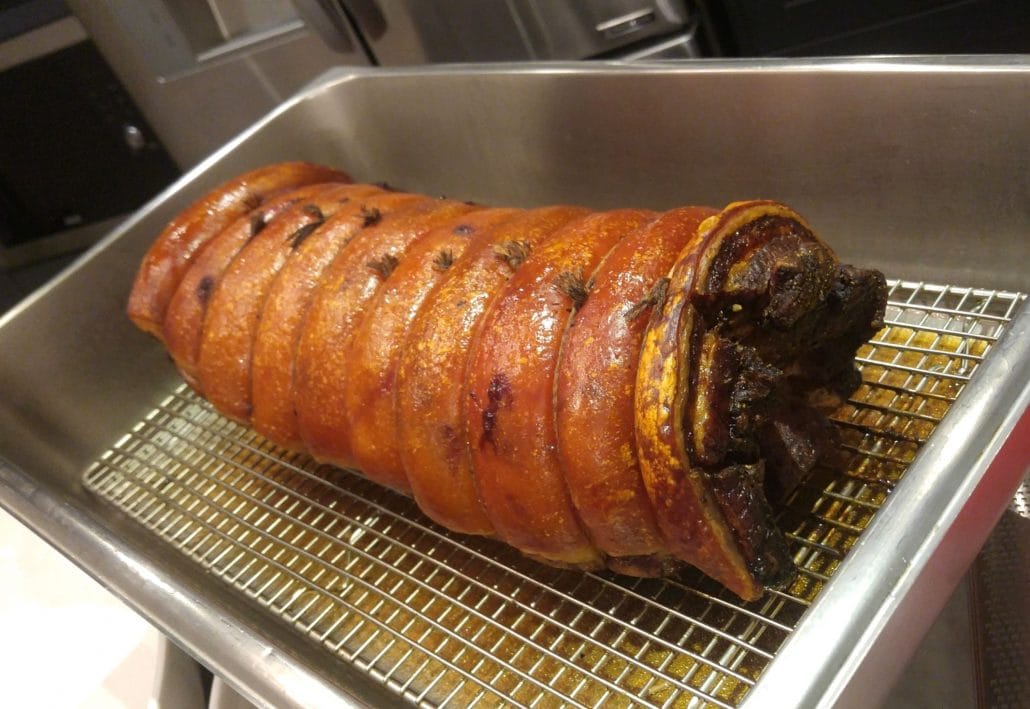 If you want to serve the porchetta as a main dish, leave it to rest for 15 to 20 minutes before slicing. You can also let it cool completely before slicing it. Serve it on a warm crusty bread roll (baguette and ciabatta work fine) with roasted garlic aioli and arugula.

Chef Kim Jung-mook of one-MICHELIN-star Myomi shares with us a simple yet delicious noodle recipe that can be prepared in 15 minutes.