What does the smell of pan-fried turnip cake (“Loh Bak Goh” in Cantonese) remind you of? A traditional dim sum that’s served all year round in Cantonese restaurants, turnip cake is a beloved staple on the dinner table of Hong Kong families during Chinese New Year.

A dish enjoyed mostly in Southern China, turnip cake is essentially a simple dish consisting of—as its Cantonese name suggests—“Lok Bak” (radish) and “Goh” (cake). White radish, rather than turnip referred to in its English name, is used as the main ingredient, while the cake part is made with rice flour and water.

The recipe for radish cake has evolved over time to include other ingredients such as dried shrimp, dried shiitake and Chinese sausage, all stir-fried before being added to the radish and flour mix. The mixture is then steamed in a steamer or a rice cooker until it solidifies.

The ingredients and cooking method may sound simple, but those who have tried making turnip cakes at home would know it’s not as easy as it seems. The proportion of radish to rice flour, together with the amount and types of ingredients being added to the mix, is often referred to as the “golden ratio”—which differs from kitchen to kitchen. As chef Kwong of three MICHELIN-starred T’ang Court puts it: “The simpler the dish looks, the more difficult it is to nail it.” 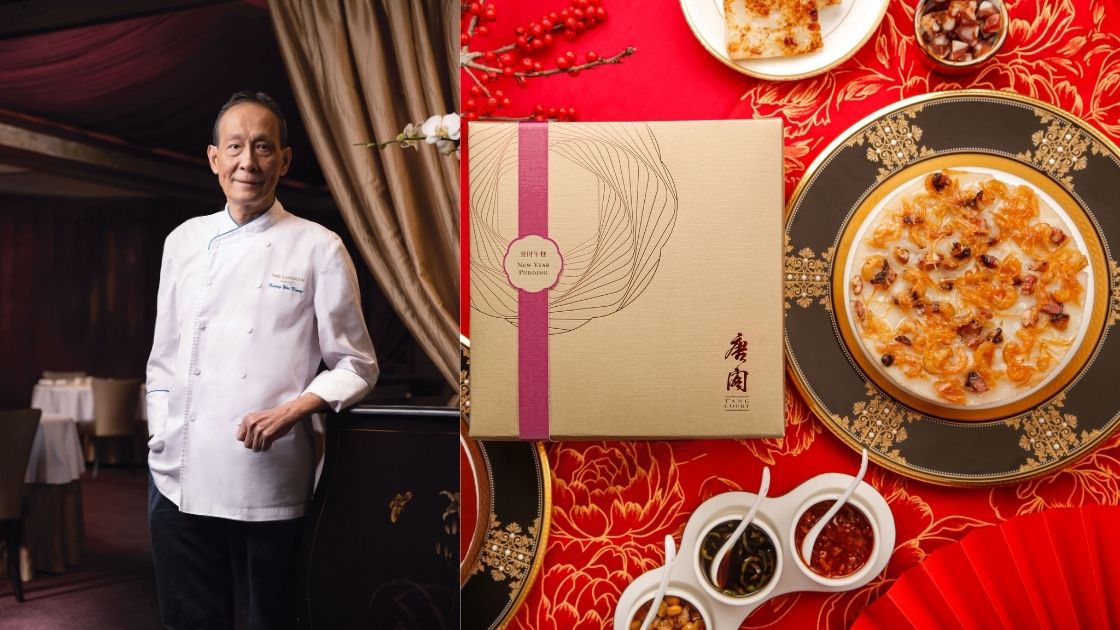 Notoriously known as one of the greatest calorie culprits during Chinese New Year, turnip cake is sometimes preferred steamed as a healthier alternative. When pan-fried, turnip cake is often served as a snack that one can easily overindulge in. Whether it’s a matter of calorie intake or taste, it all comes down to personal preference.

Chef Kwong of T’ang Court says he used to love pan-fried turnip cake when he was young. But he prefers it steamed now as he starts to appreciate the softer and smoother texture. “My taste changes as I age; my teeth are not strong enough (for pan-fried ones) these days,” he jokes. Chef Hung of Rùn feels that steamed turnip cake is more suitable for winter, as this cooking method brings out the sweetness of the white radish and aroma of Chinese sausages. There’s something heartwarming about eating steamy turnip day on a cold day.

READ MORE: How To Order Char Siu Like An Expert 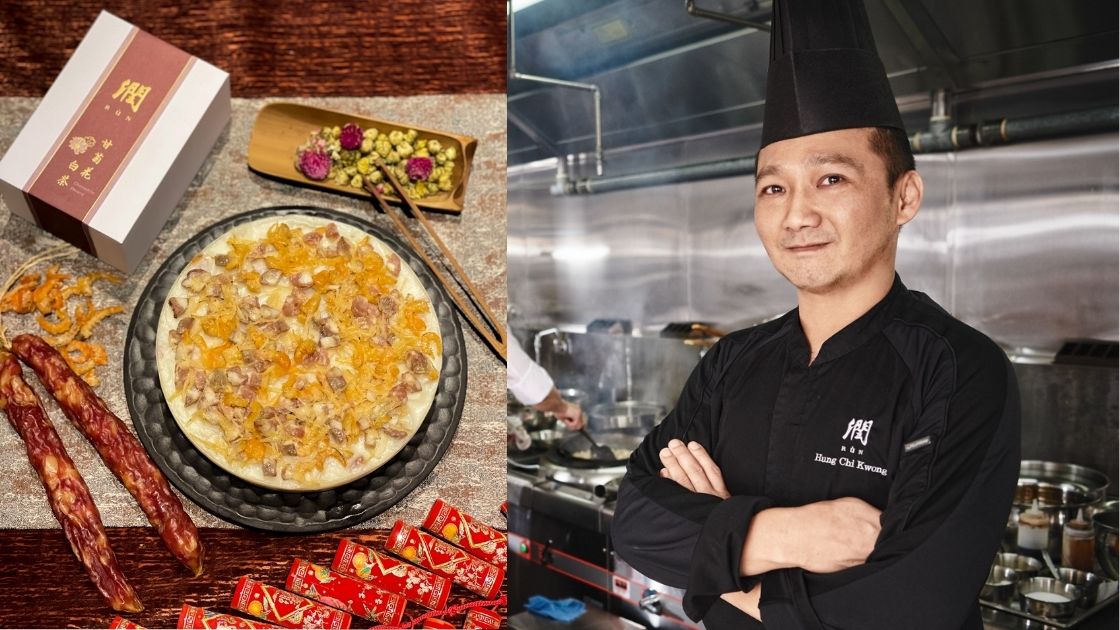 What’s the most creative turnip cake you’ve made?

Turnip cake can be as simple as a combination of plain rice flour and white radish, or as creative as the modern varieties that include truffles, abalone, and even edible gold. Chef Hung of Rùn says he had previously tried to add sea urchin to elevate the umami flavour and add new texture to traditional turnip cake. But the extremely soft, melt-in-the-mouth texture of sea urchin wasn’t a good match for the savoury cake. He has also experimented with replacing Chinese sausages with salted fish and mullet roe sauce but the strong flavours of the two ingredients tend to overpower other ingredients in the turnip cake. Having tried and tested different new combinations, he came to the conclusion that the original recipe is irreplaceable.

Chef Kwong feels the same way. Having witnessed many innovative varieties throughout the years, he was tempted to add new ingredients to the traditional turnip cake. He tried mixing and matching different ingredients together, but nothing worked. “After all these years in the kitchen, there’s one thing I’m always adamant about as a chef: Do the ingredients really go well together? It doesn’t make sense for me to sell people something that I don’t approve of.” He adds that the addition of conpoy is as far as he has ever gone in tweaking the recipe of classic turnip cake. “It's a good match. The marine taste of conpoy adds umami to the turnip cake.”

Also staying true to the tradition, Chef Tak of Lung King Heen chooses to add chopped premium 16-head South African abalone into the mix for extra chewiness. This year, his creativity is showcased in a new festive creation—the potato pudding. Crush silverfish and crumbly salted egg yolk take centre stage in a mixture of rice flour and water chestnut batter, mini potato cubes , carrots, and conpoy. Rich in umami marine flavours, this dish is a fresh take on festive cakes for those craving something new. 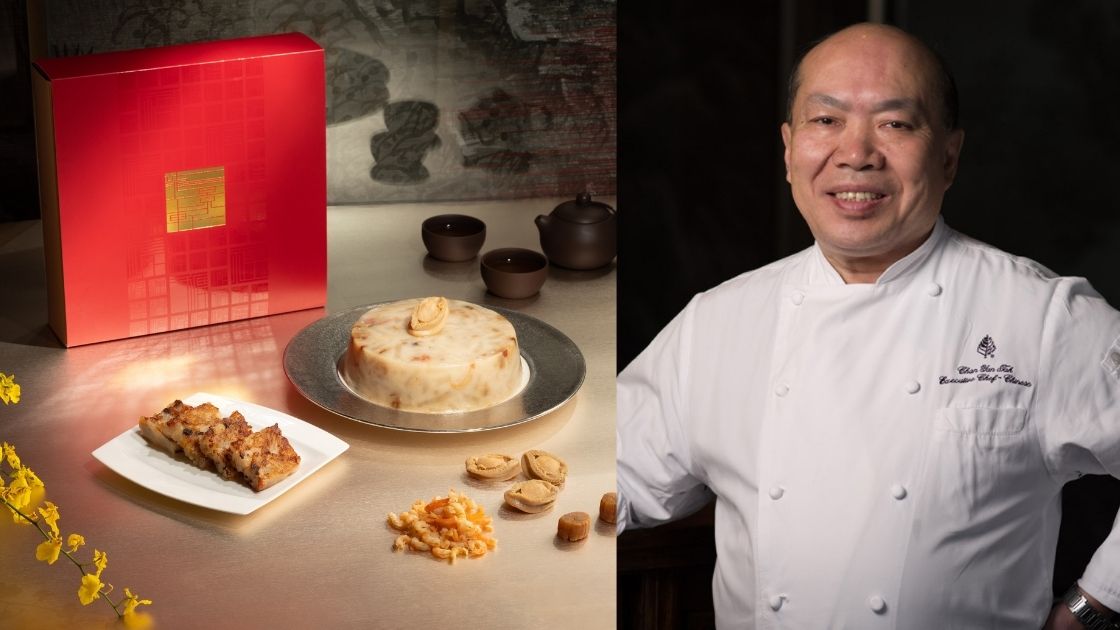 Which type of radish is the best for turnip cake?

Japanese radish, also known as daikon, is usually the radish of choice for chefs. It is denser, juicier and naturally sweeter compared to Chinese radish, according to chef Hung of Rùn. For the rest of the ingredients, including dried shrimp, conpoy and Chinese sausages, he prefers to source locally. Chef Kwong of T’ang Court says he chooses daikon because the price is similar to that of local radish, and the supply is ample. He agrees with chef Hung that white radish from Japan is not as bitter and earthy.

READ MORE: How To Get The Most Out Of Your Hairy Crab 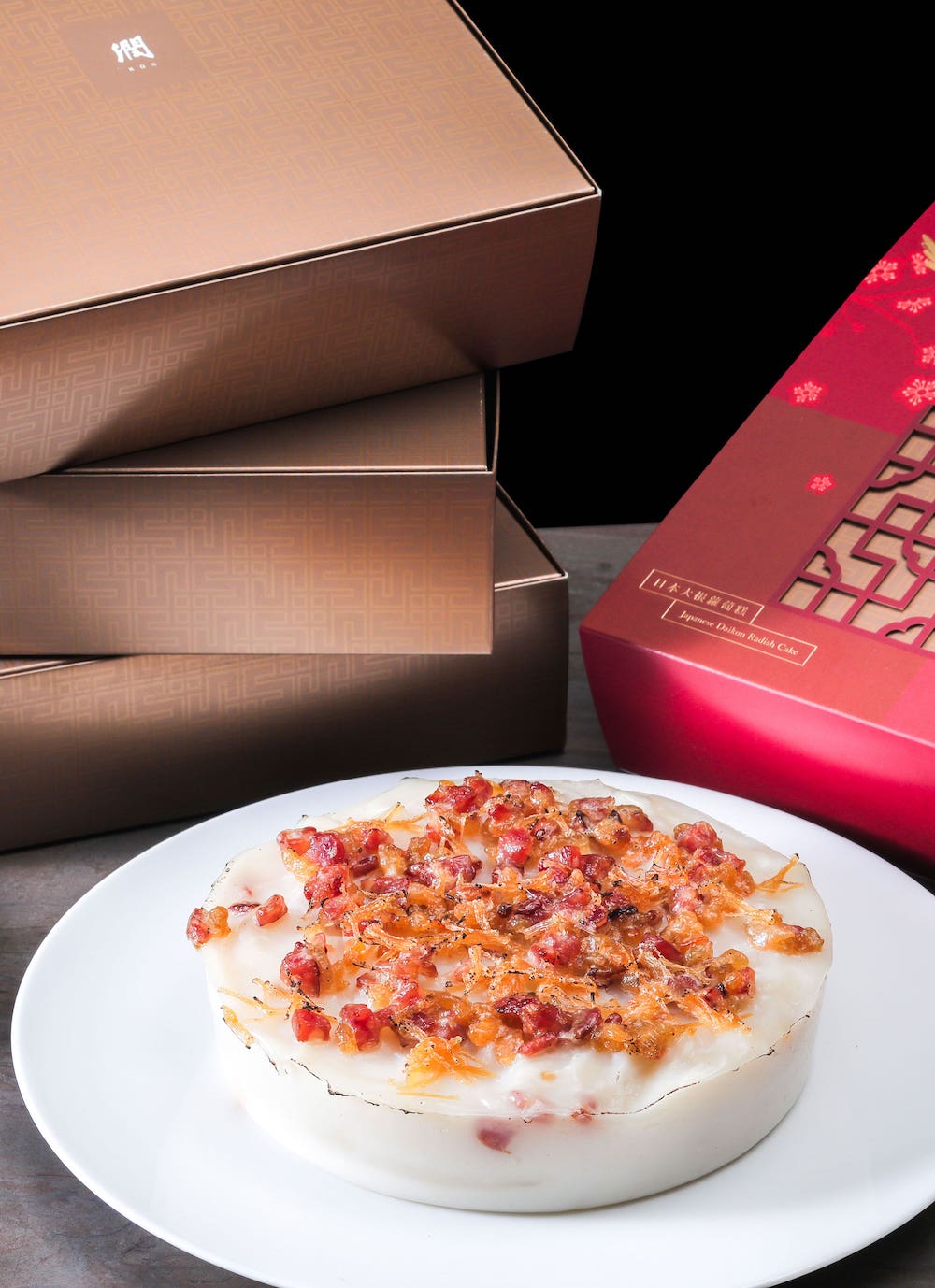 What’s the best way to pan-fry turnip cake so it doesn’t ‘collapse’?

Turnip cake can be difficult to pan-fry because of its rather soft texture, which collapses easily when it’s being flipped on the pan. It’s a common problem that many people face when they pan-fry turnip cake at home. So what’s the trick to keeping the cake intact the whole time? All three chefs say it all comes down the ratio between the rice flour, water and other ingredients. If the cake collapses when you cut it into slices, it means there’s not enough water to keep it in place as radish has a high water content. Chef Kwong shares a tip that can help make the cooking process slightly more manageable: put the turnip cake in the fridge so the cake is in a solid form that’s easier to cut and pan-fry.

So what’s the ‘golden ratio’ for the perfect turnip cake?

Here comes the meat of the matter. Surprisingly, the three chefs have slightly different answers. Placing an emphasis on the texture and sweetness of white radish, Chef Kwong of T’ang Court believes a 7:3 ratio of radish to rice flour gives the best results. As white radish has a tendency to get watery, he suggests that those making turnip cake at home can try to add a bit more rice flour to avoid the cake from collapsing easily.

Chef Tak of Lung King Heen takes a similar approach, only he applies an even bolder ratio. His turnip cake measurement follows an 8:1 ratio, meaning the amount of white radish is eight times that of flour, and he utilises a mix of rice flour and water chestnut flour. The secret is in the water chestnut flour, a common flour used in sweet Chinese puddings, which helps to hold the cake in place.

Chef Hung, on the other hand, uses leftover water from dried shrimp and conpoy to give the turnip cake more umami flavours. To balance the water content, which also comes from the radish, he opts for a 1:1 radish to rice flour ratio to make sure there’s enough flour to maintain the cake's shape. 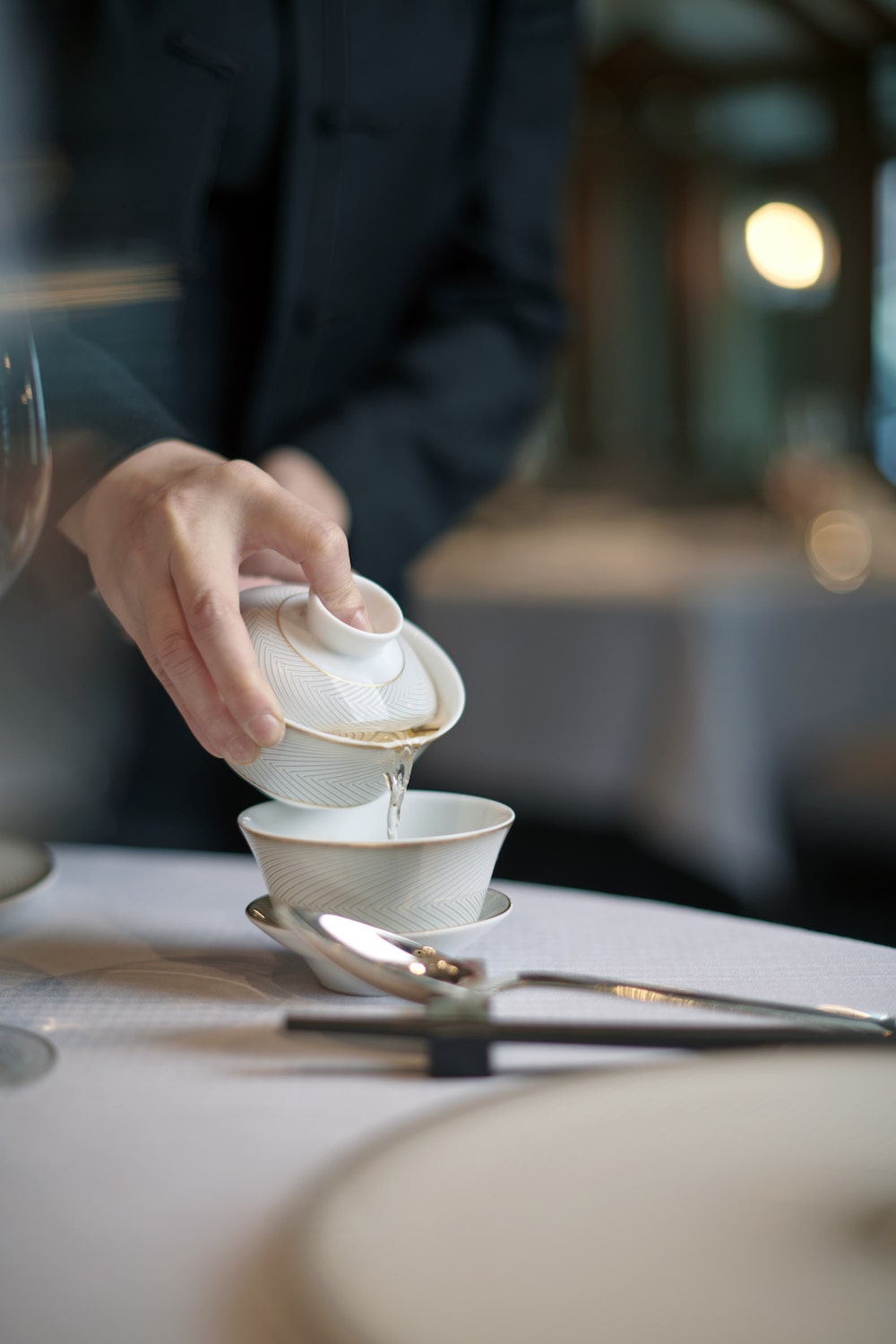 What's the best drink to pair with turnip cake?

Turnip cake, especially when pan-fried, can leave palates a little oily. To chef Kwong and chef Tak, pu'er tea is an obvious beverage of choice to counteract the greasiness of turnip cake. A black tea with a dense, earthy flavour, pu'er tea is known for its ability to help with digestion and nullifying the effects of greasy food.

For those who prefer white tea, Rùn’s tea master, Kezia Chan, recommends the light and aromatic Chamomile Reverie, a blend of chamomile, sakura, "thousand red" tea, jasmine tea and white tea leaves, to balance out the saltiness of Chinese sausages in the turnip cake.

READ MORE: Usher in An Ox-picious Year with These Chinese New Year Puddings from MICHELIN Restaurants