One-MICHELIN-starred Fook Lam Moon may be nicknamed “the canteen for tycoons” thanks to its frequent patronage by celebrities and the well-heeled in Hong Kong, but its founding family is quick to downplay the iconic restaurant's lofty image.

"This nickname is a coronation given to our restaurant by the media, and many people were afraid to come because of this. But in fact, Fook Lam Moon welcomes everyone," says Janet Chui, the granddaughter of the restaurant’s founder Chui Fook Chuen. The younger Chui, who is now in charge of marketing activities for the restaurant, hopes to proactively change this public perception.

For instance, the set menus of the past were mainly designed for 12 people. New tasting menus in recent years, however, have been introduced as an attempt to drawn in customers of two or four people for more casual meals. The restaurant has also joined the Chope reservation platform a year ago to make reservations easier and more accessible to the public.

Chui also says it is a misconception that diners are obliged to order expensive dishes on the menu at Fook Lam Moon: "Many of our customers come to eat dim sum and stir-fry dishes on weekends, which cost around a few hundred Hong Kong dollars per person. The price range is similar to other Chinese restaurants in any hotels in Hong Kong.” 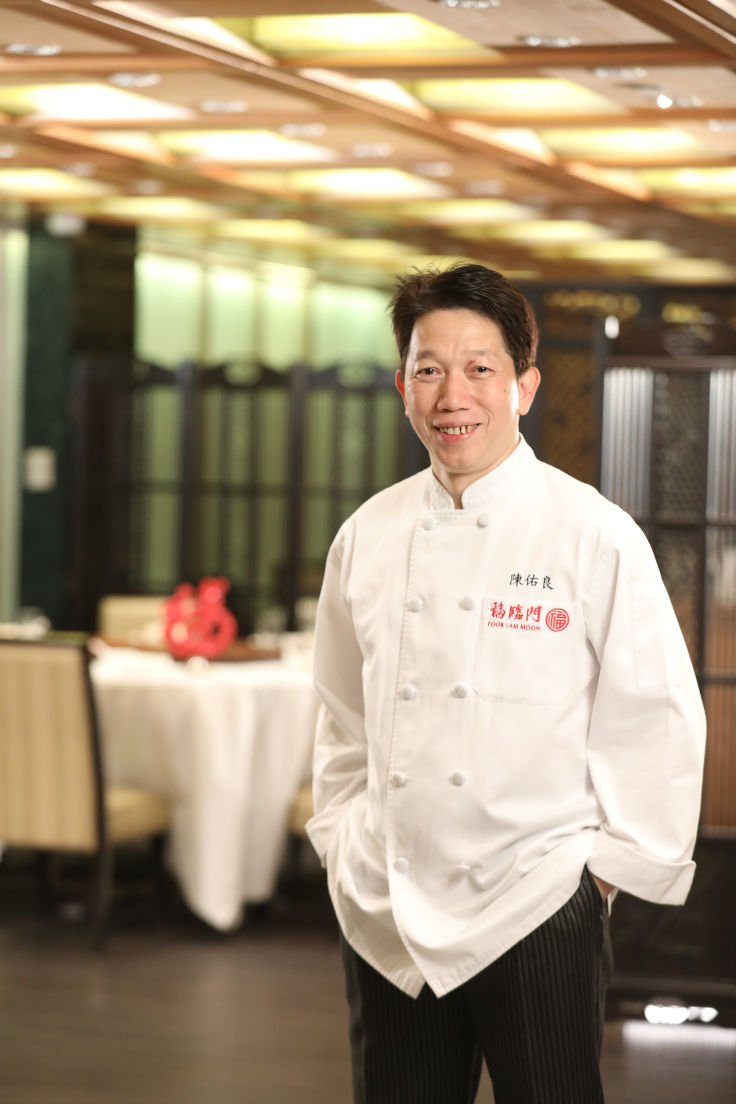 If you don't fancy prized — and pricey — abalone or bird's nest for your meal, then what are some of the must-order dishes at Fook Lam Moon?

According to executive chef Chan Yau Leung, the exceptional quality of the restaurant's food and its honest pricing are the main reasons why generations after generations of customers come back to Fook Lam Moon, regardless of what they order.

"Our dishes may not have look the fanciest, but we always use the best ingredients. For example, we only take the most tender part of choi sum for our stir-fries, even though we get a yield of less than half of every catty of the vegetable that we buy," Chan says.

Read What Our MICHELIN Inspectors Say About Fook Lam Moon

"The thing I want our guests to remember about Fook Lam Moon is the exceptional quality of the food, instead of the presentation of the dishes," Chan says.

Below, we invite chef Chan to elaborate on four of Fook Lam Moon's signature dishes that best express the spirit of Cantonese cuisine and the brand's legacy, with no pre-orders required. 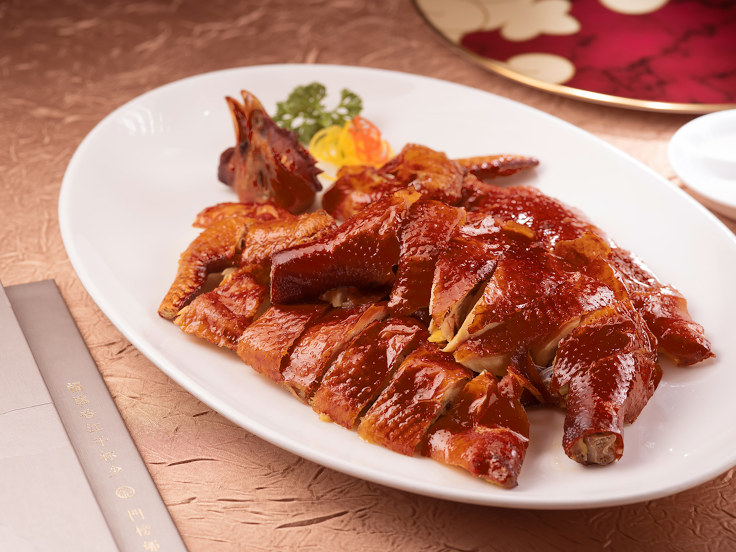 Before restaurant founder Chui Fook Chuen’s time, the most common method of making crispy chicken was to deep-fry it in a huge pot of oil until crispy, before chopping it up to serve in smaller pieces. Although this is a fast and easy way of cooking, the chicken ends up losing its tenderness. As a demanding chef, Chui came up with a new method of making crispy chicken by hanging chickens above a wok of hot oil, and basting the chicken with the oil over 400 times to make the chicken skin crispy and its meat tender. This practice has been spread to other restaurants by chefs who were trained in Fook Lam Moon, and has now been adopted by most restaurants. The influence of Chui on Cantonese cuisine in Hong Kong is unmistakable.

To this day, the recipe for Fook Lam Moon’s crispy chicken has never changed: Longgang chicken has always been the choice of chicken for this dish as the breed has the best meat-to-fat ratio. The chicken is marinated with spiced salt, a marinade is brushed its crispy skin and it is air-dried before being fried. Chan stresses that even if there were a banquet of 20 tables, they would still use the exact same method for the preparation of the chicken instead of other quicker ways. The delicious-looking and evenly coloured crispy chicken ($300 for half a chicken, $600 for a whole chicken) will always be neatly chopped up when served, and accompanied by spiced salt and lemon juice for dipping. 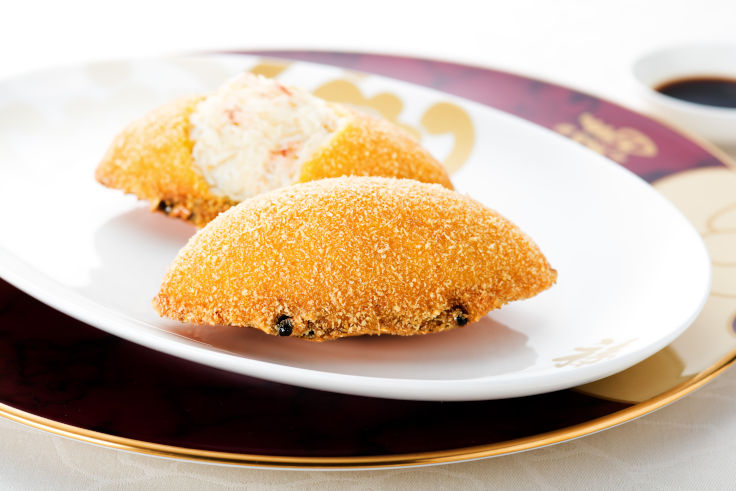 When Chui was still serving as the private chef of the prominent Ho Tung family, he became acquainted with the Western chef who he worked with in the same house. The baked stuffed crab shell was Chui’s attempt to work with Western ingredients such as onion and bread crumbs, as a reflection of his spirit of combining Chinese and Western culinary cultures.

Chan says that Chui's recipe has never changed over the years. Red crabs are chosen for this dish for their sweet and fresh flesh. After being cooked, the crab meat is removed from the shell by hand, and then fried together with fresh milk, flour and onions that were previously cooked in broth. Then the crab meat mixture will be stuffed into the trimmed crab shells, and topped with bread crumbs and egg wash before being deep-fried ($200 per portion). 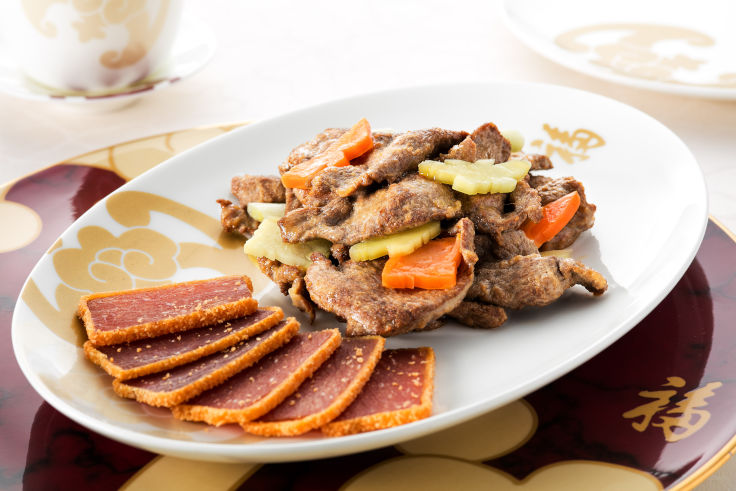 This traditional dish allows people to experience the sophistication of the Cantonese cuisine offered by Fook Lam Moon. Chan only uses the smallest and sweetest strip of the Jinhua ham leg for this dish. The cooking process is as lengthy as it is sophisticated: after the Chinese ham is diced into small cubes, they are blanched and then marinated with sugar for four days. They are then boiled with maltose, honey and white sugar for 45 minutes before being immersed in syrup for another three days. After that, the ham is steamed until soft and then coated with bread crumbs and egg for deep frying. It is served in thin slices.

For the sautéed pigeon breast, chefs have to first debone the whole pigeon and cut it into thick slices before cooking. Deboning pigeons is a real test of a chef's knife skill, as pigeons are small with many tendons. It is only when the pigeon is being cut into the right size and has the right amount of heat applied to it in the wok that the meat can remain tender, juicy and slightly charred on the outside. This dish used to be a popular pre-dinner snack for banquets, but it has over time become a dish available on the a-la-carte menu at Fook Lam Moon ($320).

As the caramelised Jinhua ham is sweet on the outside and savoury on the inside, and tasty enough on its own, some diners will order it as a separate dish ($280 for 8 slices) and enjoy it with wine or other alcoholic drinks. 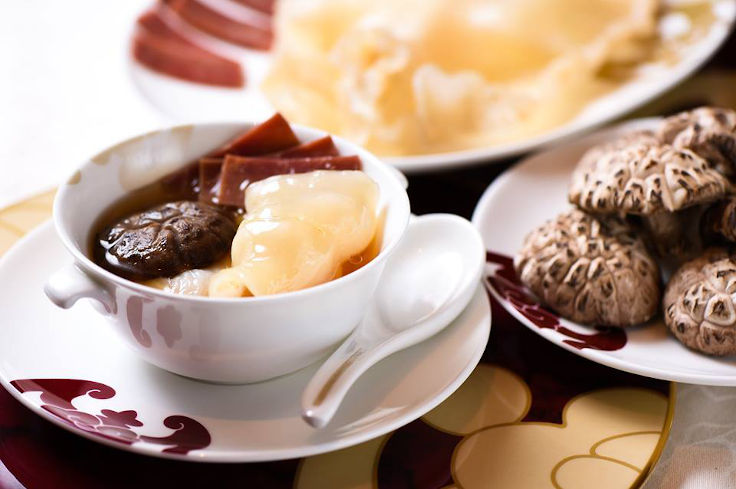 As soon as the pot of this soup is being served, the aroma of fish maw, Chinese ham and shiitake mushroom quickly fills the air. Only top-shelf ingredients are used in this soup, including shiitake mushrooms harvested in Japan in the autumn, and the tenderest part of Shanghai cabbage, which is stewed once before simmering together with the rest of the ingredients in order to add an additional layer of sweetness to the soup. Customers are free to specify the type of fish maw for the soup according to their budget. Chan will also adjust the boiling time of the soup according to the customer's preference on whether they prefer to maintain the mouthfeel of the fish maw, or to have it totally or partly dissolved into the soup for a thicker consistency and richer taste.

Apart from the ingredients, the essence of the soup derives from the broth that is used. Fook Lam Moon’s broth is the result of repeated research by the founder Chui Fook Chuen. It is made from mature chicken, lean pork, and five-year-old Jinhua ham. It is full of umami and elevates the aroma of other ingredients. Chan points out that this soup is served all year round. At banquets, when guests prefer not to have sharks’ fin or bird's nest soup, this double-boiled soup becomes a very popular alternative.

All images are provided by Fook Lam Moon.

Prices in the article are in Hong Kong dollars.

This story is written by Mandy Li and translated by Billy Kwan. Click here to read the original article.

Sichuan Hong Kong Macau
All articles of Dining Out