A culinary destination appreciated by gourmets for its three Michelin-starred restaurants (FAGN, Speilsalen and Credo), microbreweries and numerous cafes, Trondheim has a cultural heritage that enchants tourists.

Nidaros Cathedral – The centre of a pilgrimage dedicated to Saint Olav and burial place of the Norwegian kings, this 12C cathedral of grey steatite is an example of Romanesque (the oldest parts) and Gothic styles and the national sanctuary. A superb rose window ornates the great portal and the western façade is decorated with rows of statues of saints and kings. Inside, the predominance of vertical lines reinforces the impression of height.

Sverresborg – Sverresborg Trøndelag Folkmuseum, set in a park on the former site of a Viking fort, features some sixty or so characteristic houses and farmsteads from the region, dating from the 12 to the 19C. You will see a school, workshops, a wooden church and exhibits devoted to telephones and skiing, among others.

Museum of Musical Instruments – This fascinating museum, housed in the splendid Ringve Manorhouse (19C) on the Lade peninsula, looks out over the old town and the fjord. Visits include a guided tour through a production representing the 18C, staged with actors in period costume playing ancient instruments, many very rare. These include wind chimes, a harpsichord dating from 1767, a piano harp, a cithara from Telemark, a theorbo (lute family), and miniature or exotic instruments.

Trondheim Old Bridge – In 1861 the town's old bridge located in the cathedral area replaced an even older bridge dating from the end of the 17C. It affords lovely views of the gabled warehouses along the riverside, timber buildings built on piles in the 18C and painted red, yellow and brown. At the end of the bridge, Øvre Bakklandet (to the right) and Nedre Bakklandet (to the left) form a long, narrow cobbled street, lined with low timber houses, now trendy cafés, restaurants and art and craft galleries.

Archbishop's Palace Museums – The palace was the archbishop's residence until it was occupied by Danish governors after the Reformation, and later requisitioned by the army. It underwent numerous renovations, including in the 15C when it was fortified. The building and the former arsenal house interesting museums: the Museum of the Archbishop's Palace and its fine medieval sculpture collection, the Crown Jewels, and the Military and Resistance Museum, which charts Norway's wars, from the Viking era to the present. 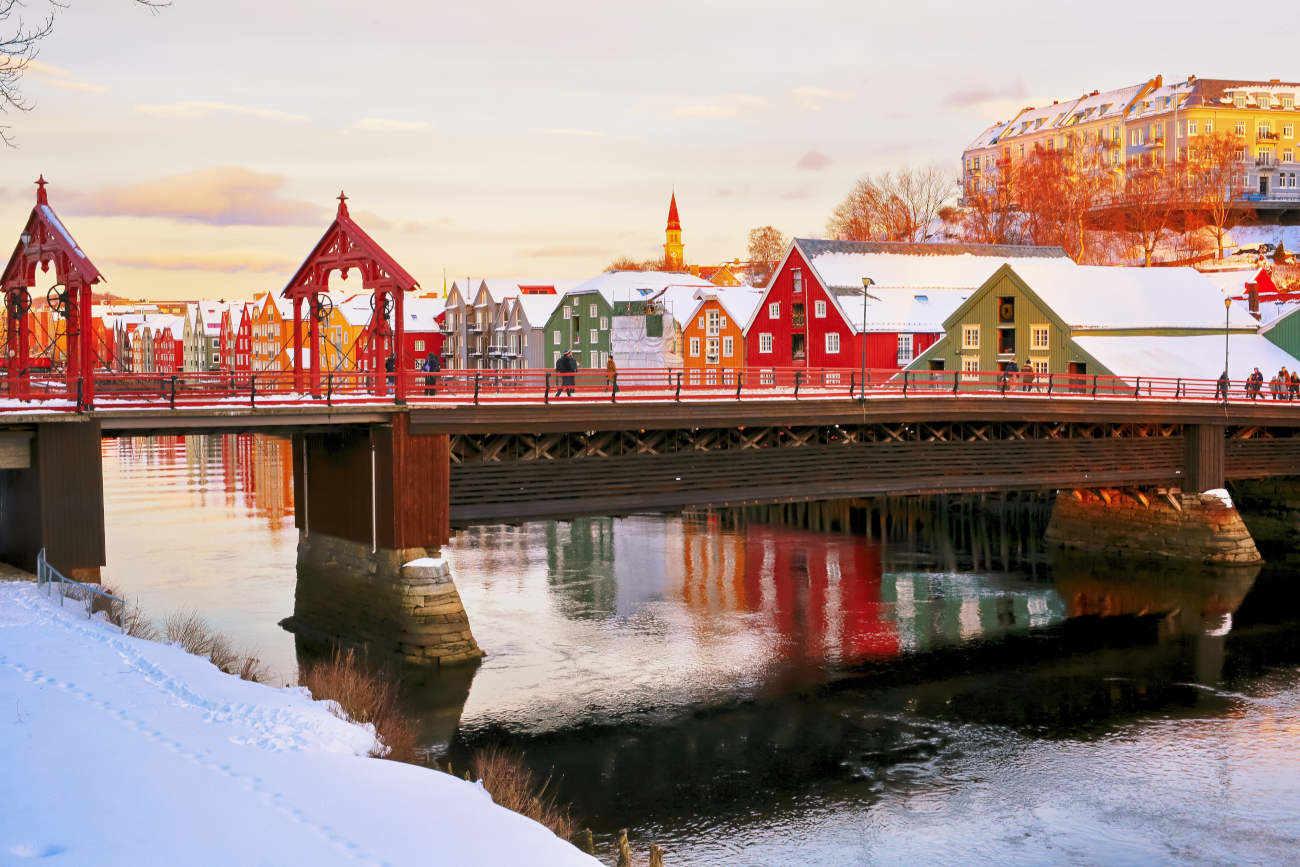 A Bit of History

Nidaros – Determined to unite the kingdom of Norway under his rule, the Viking king, Olav Tryggvason founded the town of Nidaros, at the mouth of the River Nidelva, in 997 and built a royal residence there thus making it the first capital of Norway. At the same time he built the first Nidaros church in an effort to convert the people to the new Christian faith.

Saint Olav – Olav Tryggvasson had only partially succeeded in his double ojectives of unification and conversion. Some 30 years later rebellious Viking chiefs, forced another Christian king, Olav Haraldsson to flee his kingdom. He returned in 1030 but was killed at the battle of Stiklestad. He was buried in Nidaros church and rumours spread rapidly of miracles connected with his grave, Olav was declared a saint and his remains were placed in a precious shrine. Pilgrims from the whole of Scandinavia and beyond came to visit and this constant flow of visitors brought prosperity to the town which developed rapidly. Work on the present Nidaros Cathedral began in 1070.

Spiritual capital of Norway – The importance attached to St Olav’s shrine made the Nidaros church particularly powerful and its influence grew unchallenged throughout the Middle Ages, when it became the custom for the kings of Norway to be crowned in the cathedral. Once established, the tradition continued even after the Reformation. The ceremony of the coronation has now been discontinued in Norway, but the present king, Harald V, came to Trondheim in 1991 to be consecrated in Nidaros Cathedral.

Trondheim – Throughout the Middle Ages, the town saw its harbour activities increase, but the Reformation slowed down economic growth for a while and in 1681, Nidaros, which had been renamed Trondheim, was devastated by a fire and parts of the old town destroyed. General Caspar de Cicignon, the descendant of a French Huguenot who had emigrated to Norway, redesigned the town centre with broad straight avenues. Today Trondheim has developed into one of the most important centres of high technology in the country, and its university is outstanding in the arts. But tradition is not about to be superseded by modern trends and every year a cultural festival takes place around 29 July, in honour of St Olav who still occupies a special place in the hearts of the Norwegian people.

This article is sponsored by Visit Trondheim