Geographically sandwiched between two of Asia's culinary powerhouses China and Japan, Korean cuisine is out to prove a point. The fact that there are over 100 different types of kimchi tells you how seriously Koreans take their food.

Kimchi (Fermented Vegetables)
Kimchi is a traditional side dish served with meals made from salted and fermented vegetables seasoned with chilli, scallions, garlic and ginger. The most common vegetable used for kimchi is napa cabbage, but depending on the restaurant, kimchi can be made from all varieties of vegetables. 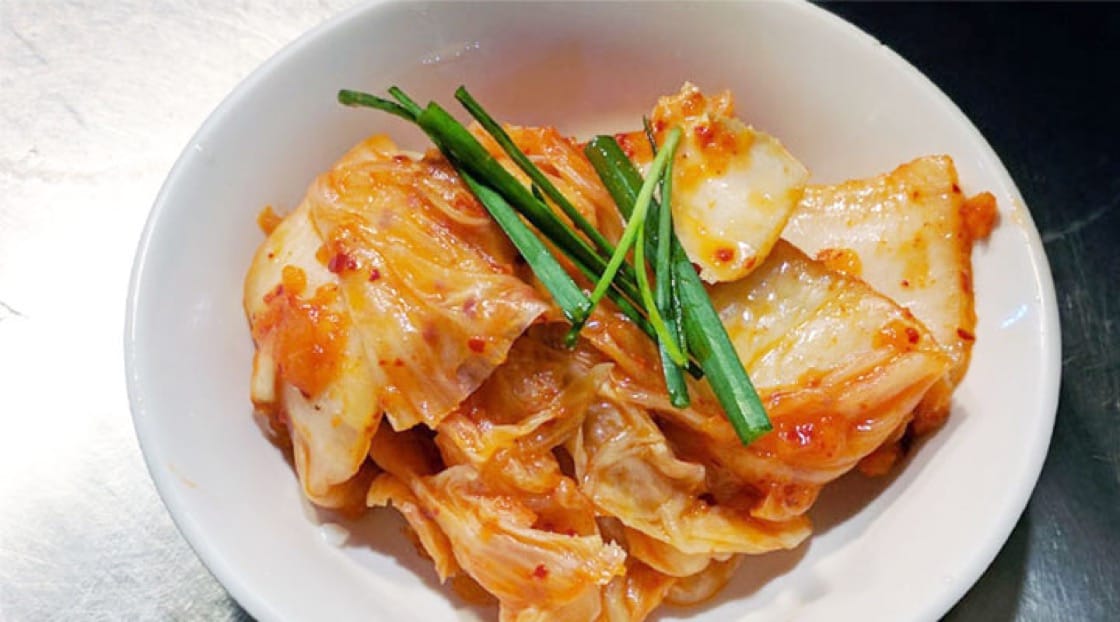 There are over 100 types of kimchi in Korea.

Gogigui (Korean BBQ)
Arguably Korea’s most famous food export, gogigui refers to the popular method of Korean meat grilling over a gas or coal-powered hotplate. The most popular forms of meat grilled are beef, pork and chicken. Some notable menu items at a Korean BBQ include: galbi (marinated beef ribs) and bulgogi (marinated beef or pork). 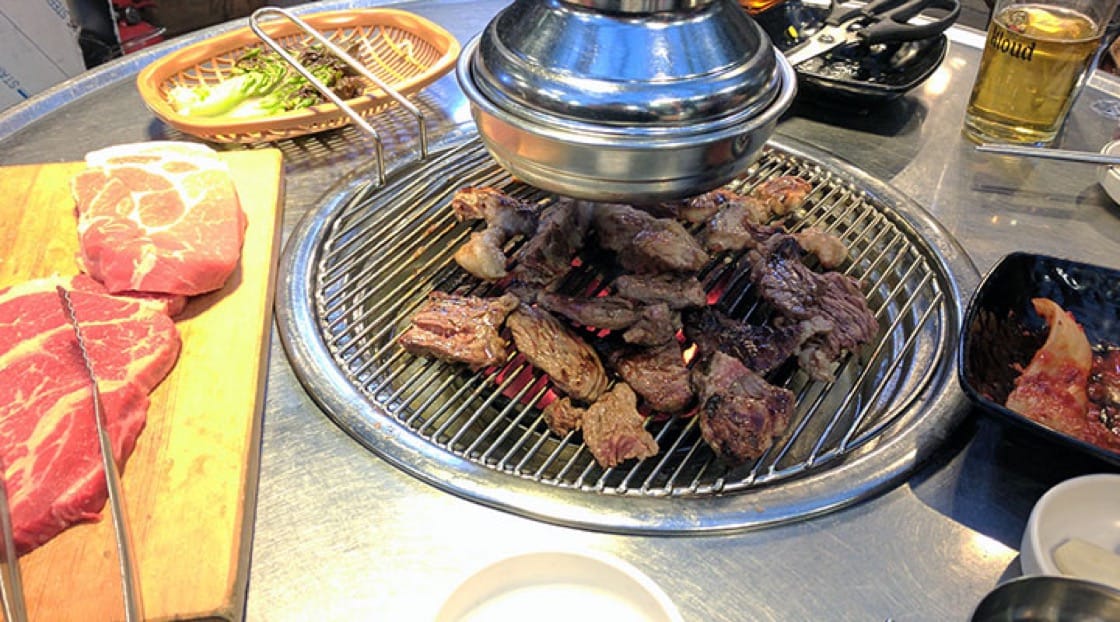 Samgyetang (Korean Ginseng Chicken Soup)
Containing a whole baby chicken filled with ginseng, garlic, jujube and other herbs, samgyetang is believed to promote good health with specialist restaurants cooking secret recipes passed down from generations. Samgyetang is usually served with an array of Korean side dishes and rice. 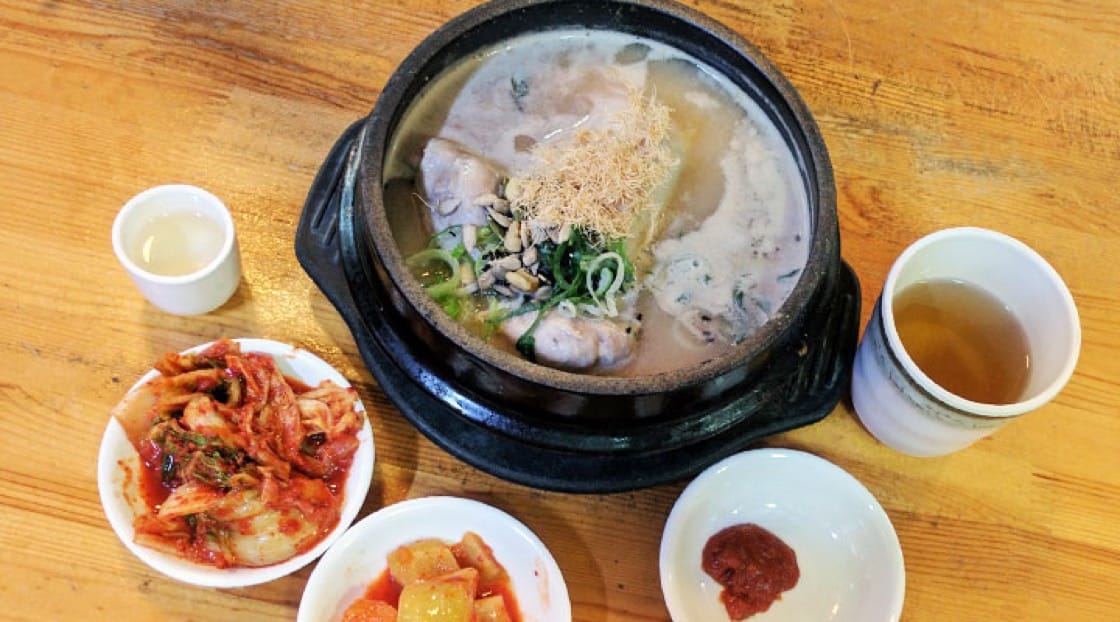 Samgyetang is believed to promote good health in Korea.

Seolleongtang (Ox Bone Soup)
Seolleongtang is a traditional Korean soup made from ox meat and bone topped with spring onions and mince garlic. The milky-coloured soup is delivered to the table unseasoned, leaving you to add salt and black pepper to taste. 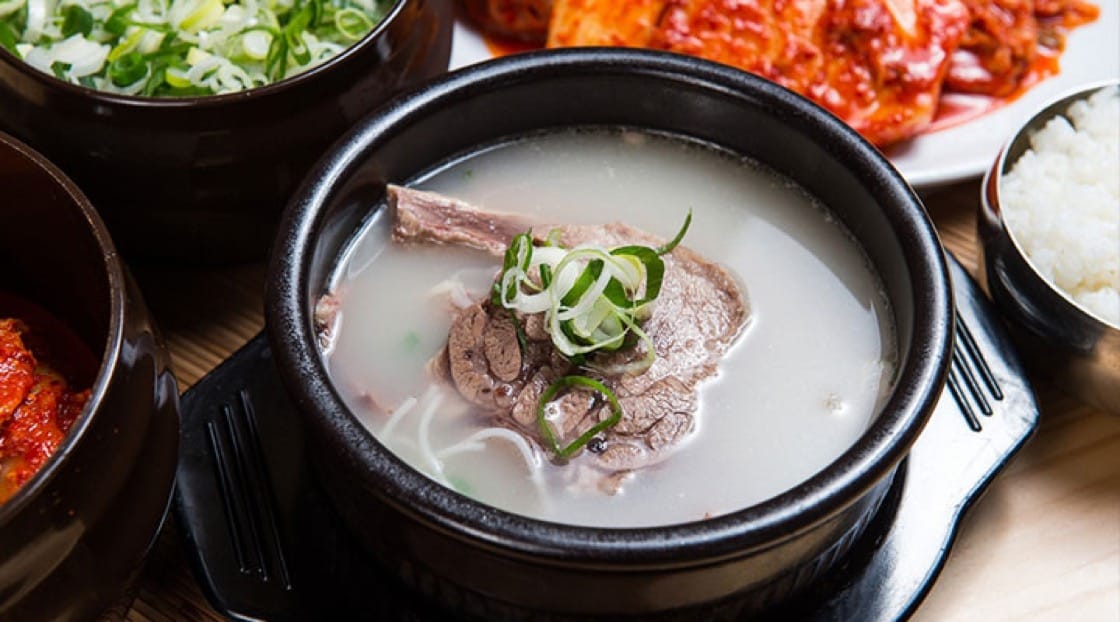 The origins of Seolleontang is said to have come from Mongols.

Bossam (Boiled Pork Wrap)
Bossam is pork slices boiled in spiced brine until tender then thinly sliced and served with lettuce or Perilla leaves for wrapping. In Korea, bossam is considered an anju dish, meaning food consumed with soju, beer or any other form of alcohol. 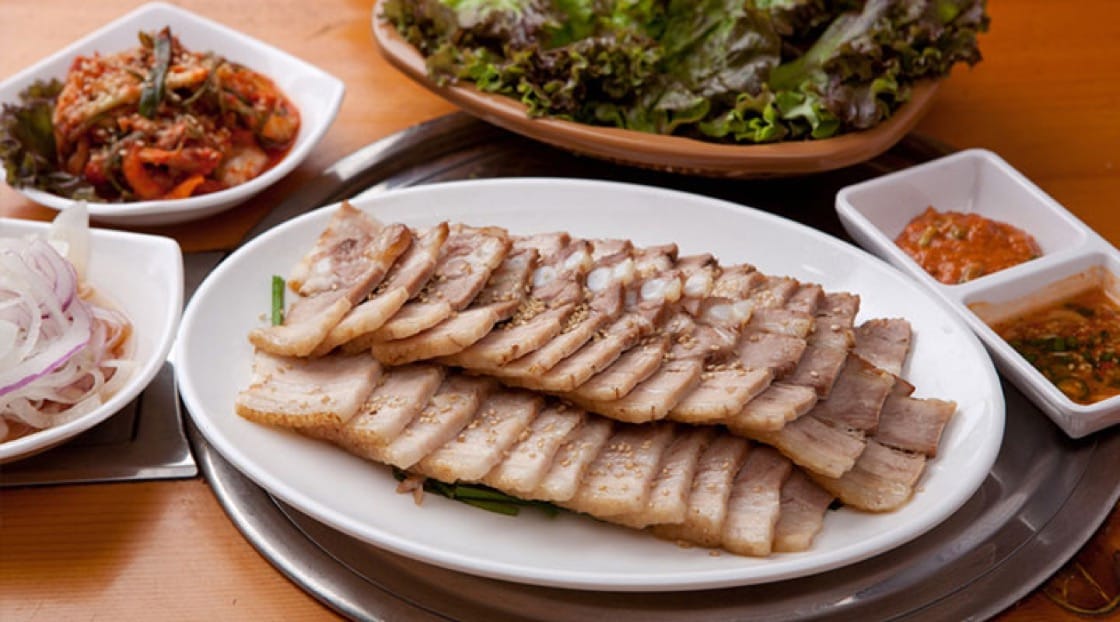 In Korea, bossam is considered an anju dish, meaning food consumed with alcohol.

Bibimbap (Mixed Rice Bowl)
Bibimbap meaning ‘mixed rice’ is essentially sautéed seasonal vegetables, egg and sliced meat served in a bowl. At table-side, you are required to mix the contents in the bowl yourself and add the spicy bibimbap sauce to taste. 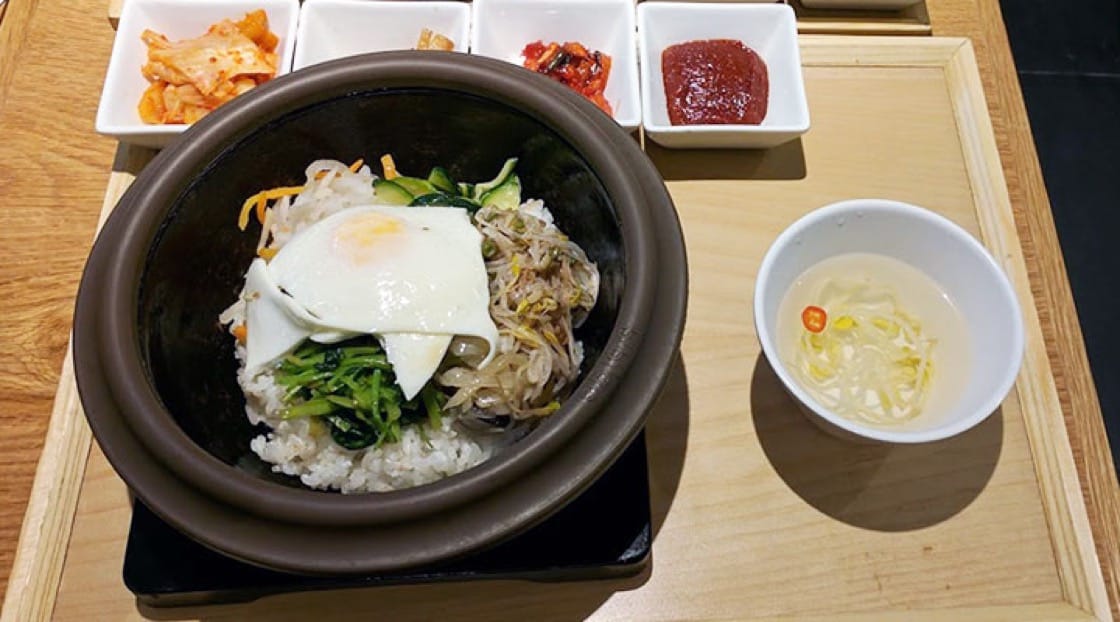 Mandu (Korean Dumplings)
A cross between Chinese dumplings and Japanese gyoza, Korean mandu comes boiled, steamed, pan-fried or deep fried. Once a part of Korean royal cuisine, mandu can be found everywhere in Korea served in soup or by itself in a soy-vinegar-chilli dipping sauce. 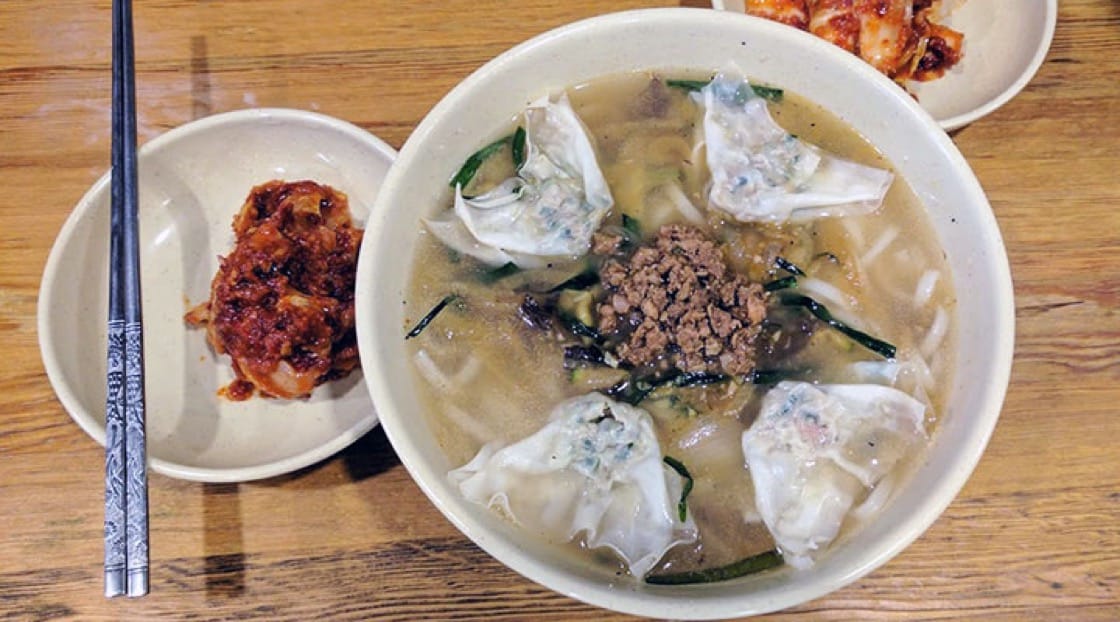 Mandu, a cross between Chinese dumplings and Japanese gyoza.

Japchae (Stir-Fried Noodles)
Often served as an accompanying or side dish, japchae is stir-fried sweet potato noodles with beef and vegetables in a sweet soy and sesame oil sauce. 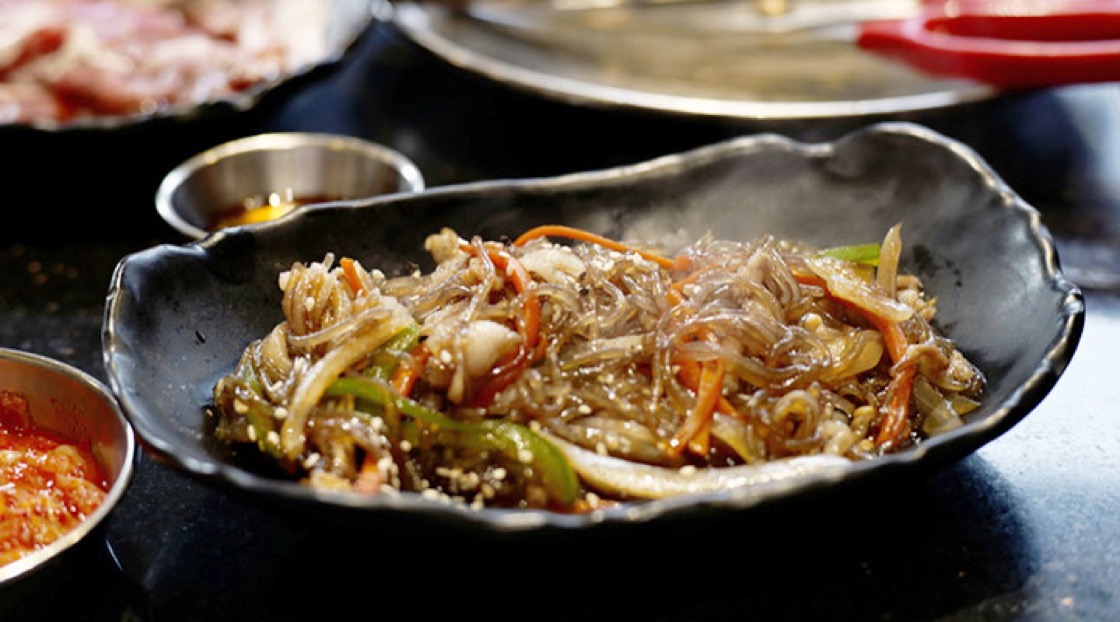 Japchae is usually a shared side-dish. 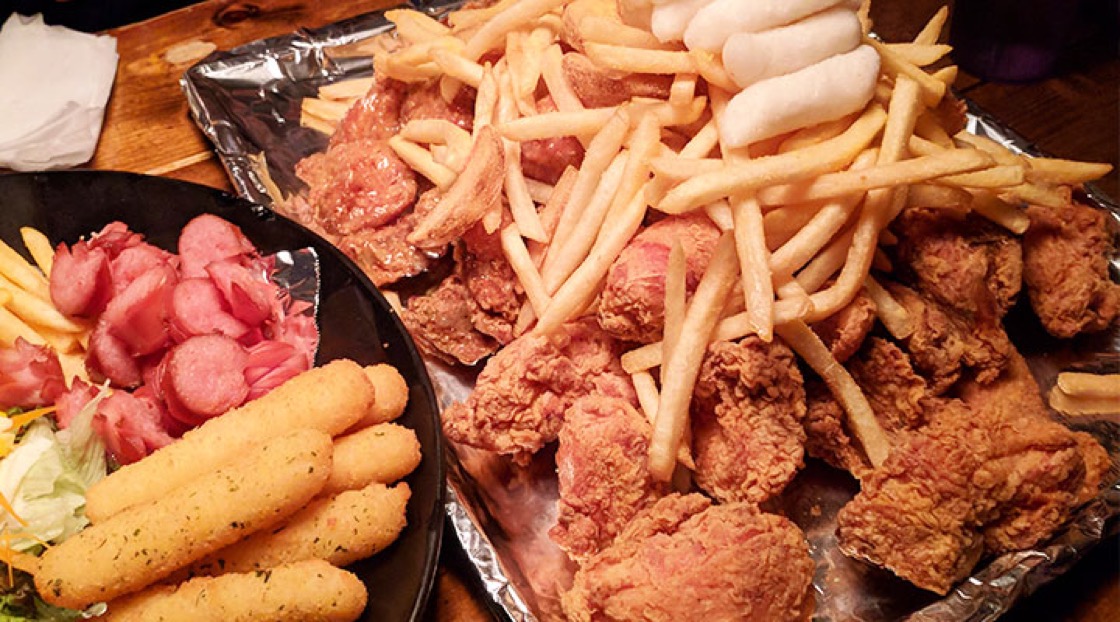 Often fried chicken comes with everything else that can be fried.

Ddukbokki (Korean Spicy Rice Cakes)
Made of soft rice cakes and fish cakes drowned in a spicy chilli sauce, ddukbokki is a popular Korean street food dish found in restaurants as well as carts and street-side tents on main streets and thoroughfares.

Odeng (Fishcake Skewer)
Another popular street-side snack, odeng is seasoned fish cake cut into strips, skewered and cooked in a soup. Odeng usually comes with a bowl of chilli soy sauce and a brush for you to add further seasoning if required. Don’t forget to drink the complimentary soup! 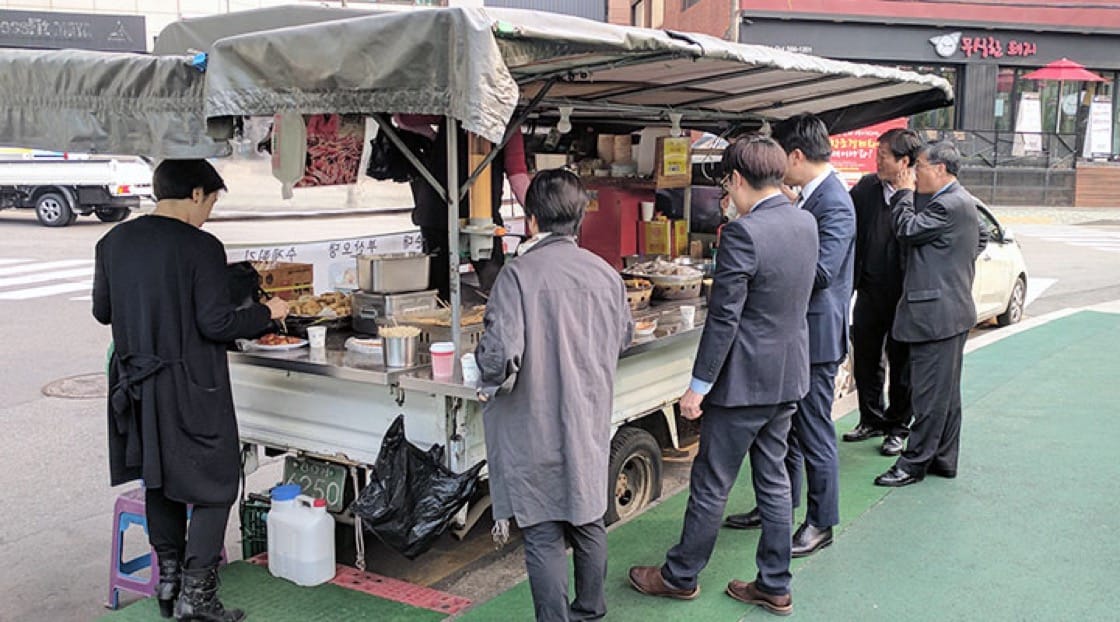 Naengmyeon (Cold Noodle Soup)
Naengmyeon is a cold noodle dish topped with pickled and fermented vegetables and slices of cold boiled meat. Although naengmyeon is a popular summertime dish it is enjoyed throughout the year even in winter. 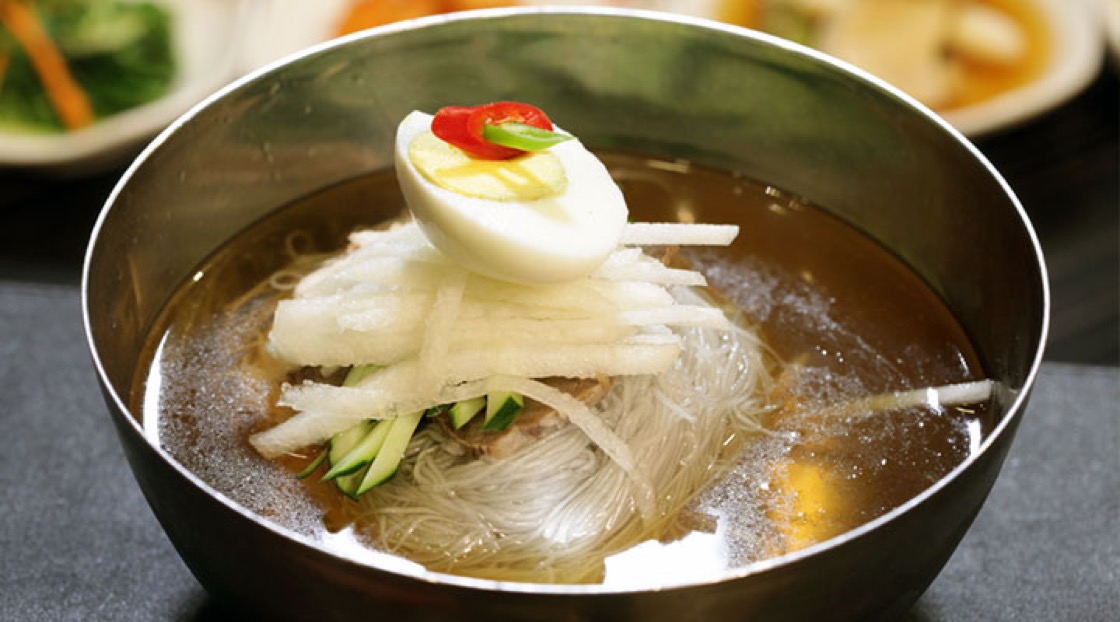 Naengmyeon is eaten even in winter. 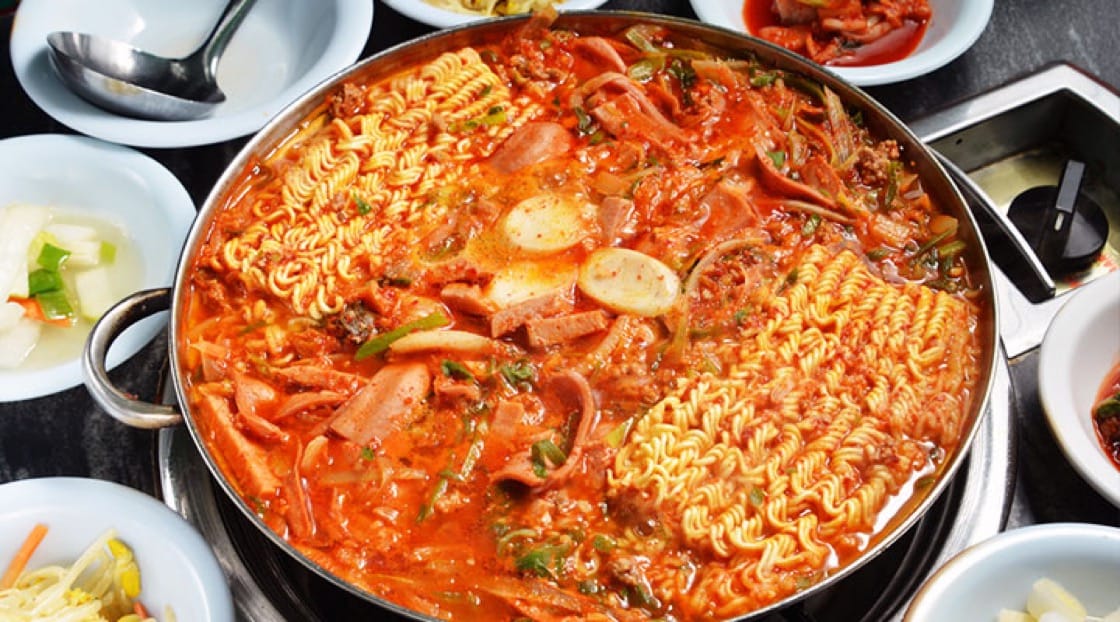 Budae Jjigae is a legacy from the Korean conflict in the 1950s.

Sannakji (Live Baby Octopus)
For those wanting to get freaky and definitely not for the faint-hearted, sannakji is live baby octopus eaten raw. The octopus is chopped fresh; with the tentacles still moving, you dip them into sesame oil or sauce before putting it in your mouth. A word of warning, the wiggling tentacles have suction caps that stick to your mouth cavity, so chew them and swallow as quickly as you can before it chokes you! 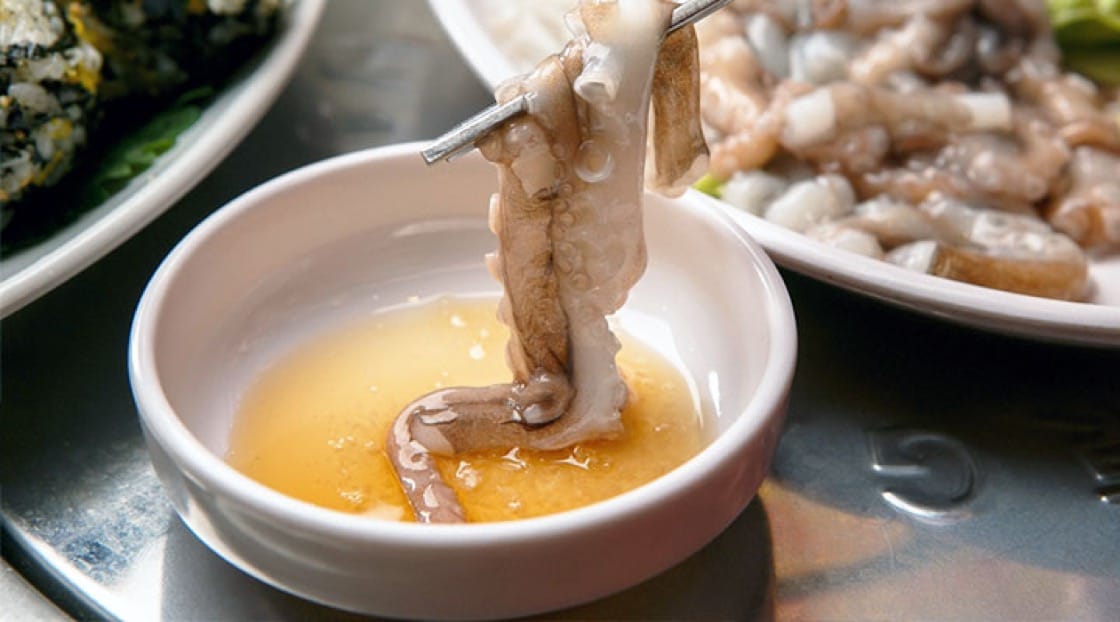 Don't forget to chew, as sannakji can be a choking hazard.

Bingsu (Shaved Ice)
All the rage amongst giggling teenagers and smitten students on dates, bingsu is another Korean export taking the world by storm. The classic bingsu contains red bean and shaved ice with condensed milk, while modern renditions range from seasonal fruits to Swiss chocolate. 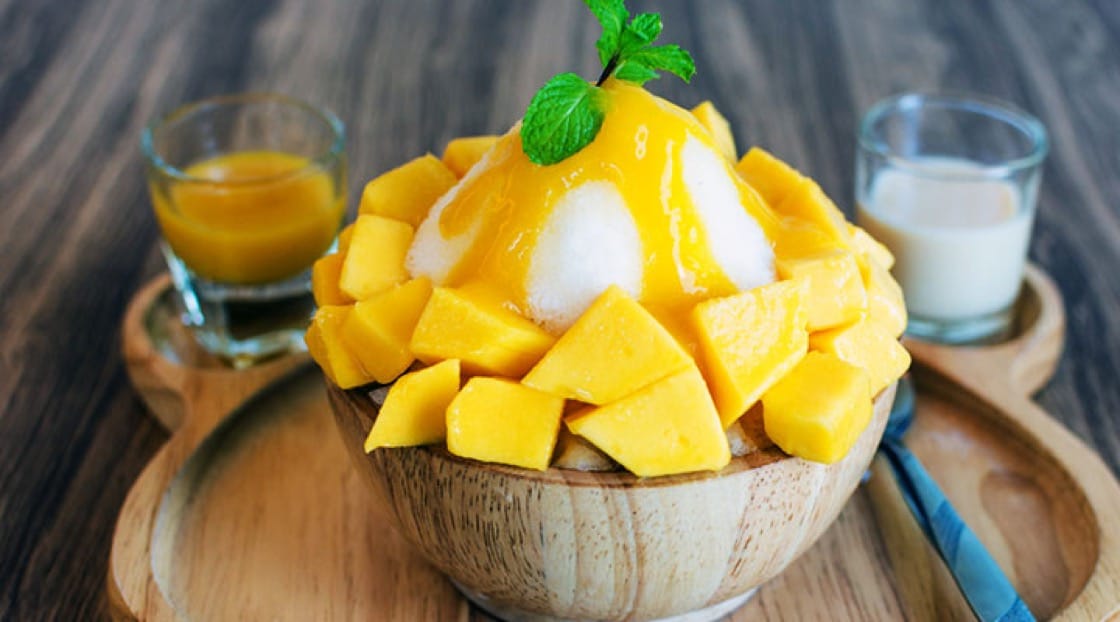 Bingsu comes in all contemporary fruits and flavours these days.