The MICHELIN Guide 2022 selection has just been unveiled and the City of Light has been lavished with a flurry of stars by our inspectors. To complement your culinary adventures in the capital, here are 11 establishments that have been included in the MICHELIN Guide's hotel selection. Paris in the limelight! A galaxy of stars lit up the French capital on 22 March. From Arnaud Donckele at Plénitude Cheval Blanc to Matthias Marc at Substance and Bruno Verjus's ode to exceptional ingredients at his restaurant Table, Paris's vibrant, diverse and high-calibre culinary scene is on show for the world to see. For travellers wishing to explore the capital through the prism of its finest restaurants, we have handpicked the most exclusive and captivating Parisian hotels from our selection – accommodation that stands out for its style, standard of service and personality.

1st Arr. (Musée du Louvre/Les Halles)
Luxury meta-brand LVMH’s first Parisian hotel is, as you might expect, a big deal: a thorough interior redevelopment of the iconic Art Deco department store La Samaritaine, looking out over the Pont Neuf and Saint-Germain-des-Prés. With just 72 rooms and suites, Cheval Blanc Paris operates on a boutique scale, even as it ascends to grand-hotel heights of luxury — the most extravagant suite spans two levels and contains its own swimming pool. Highlights include the Dior Spa and a vast indoor infinity pool, as well as four restaurants by an all-star team of highly decorated chefs. The Plénitude restaurant has just won the Holy Grail with three stars in the 2022 MICHELIN Guide France.

1st Arr. (Musée du Louvre/Les Halles)
Located near the Palais Royal Restaurant, which has just been awarded a second star, the Grand Hôtel du Palais Royal Paris is a temple of luxury and French elegance. Sometimes the name pretty much says it all. On one level that’s true of the Grand Hôtel du Palais Royal, which isn’t shy about pointing out that it’s the only luxury hotel near the Palais Royal — in fact it overlooks the royal gardens, and is thus mere yards from the Louvre and the Tuileries as well. But on another level, the words “grand hotel” don’t quite paint the picture they once did. 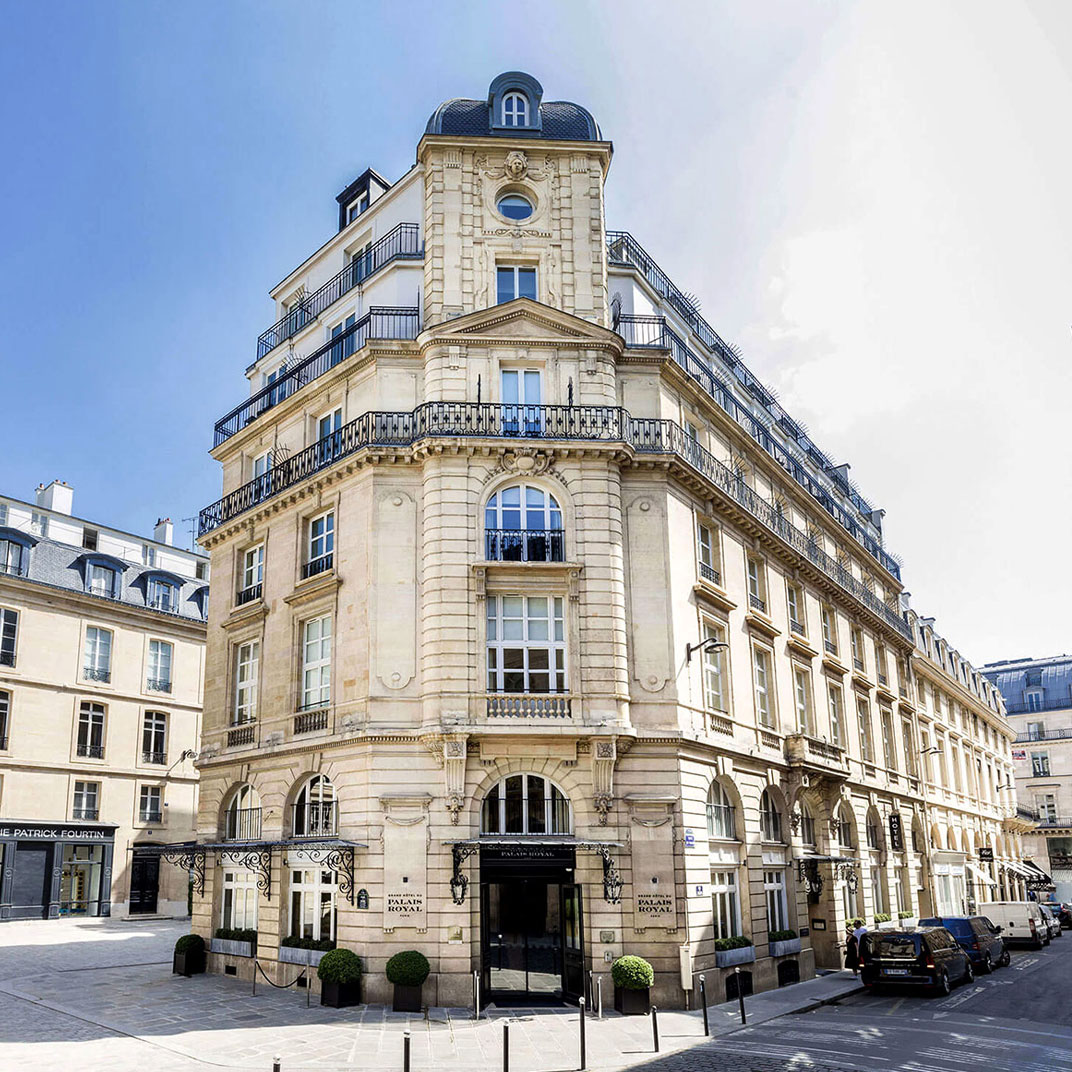 16th arr. (Trocadéro)
Suffice it to say that the Saint James is anything but typical. In Paris, a hôtel particulier, a freestanding house, is unusual enough — but something like the Saint James, almost a country-style château, surrounded by a wall and garden, is vanishingly rare. It’s fresh off a thorough renovation by Laura Gonzalez, who has updated its unique interiors for a new decade; return visitors will find it subtler and more sophisticated than before, but no less expressive. A must-visit is Bellefeuille, newly starred in the 2022 MICHELIN Guide selection! 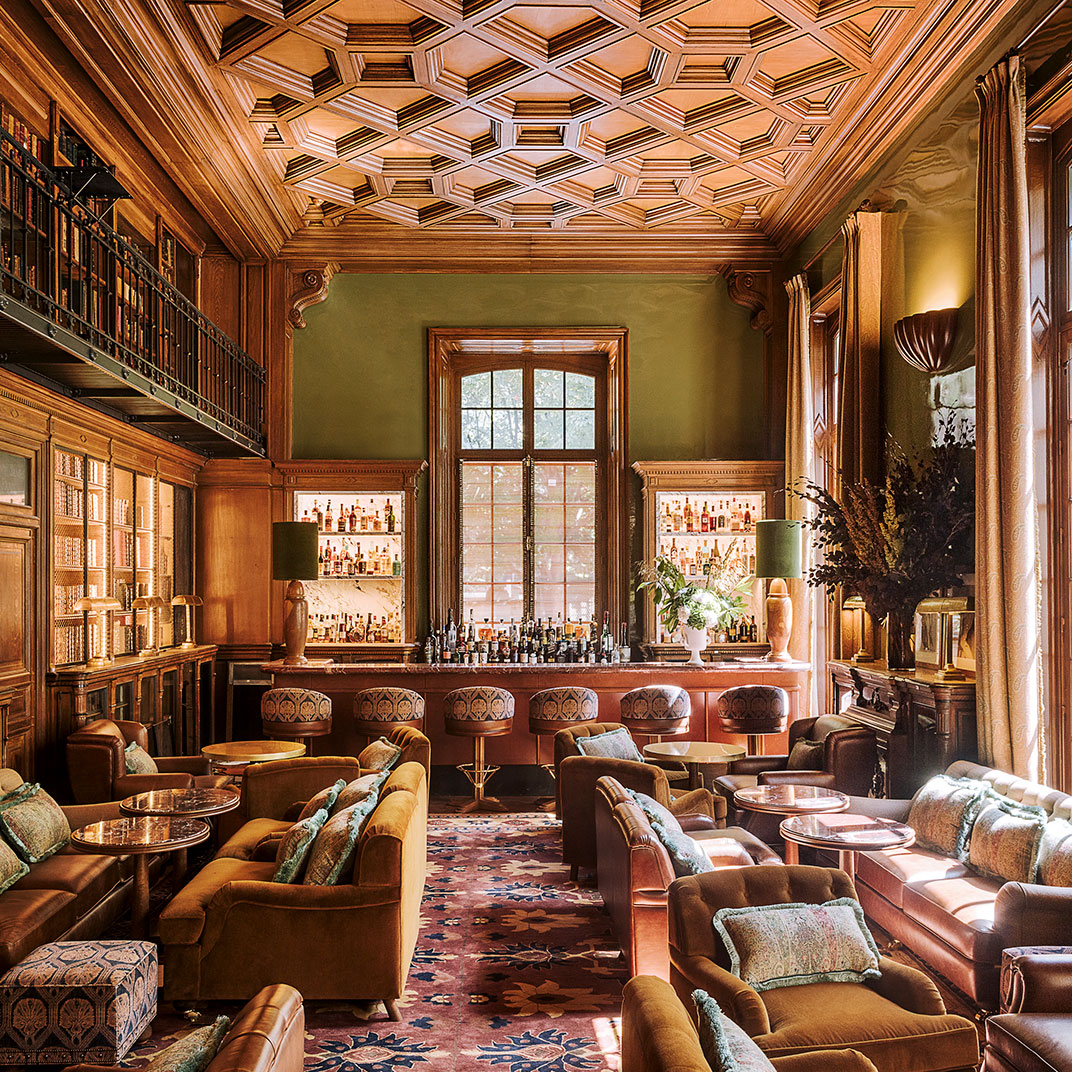 16th arr. (Trocadéro)
Tablet has been online long enough to see several evolutions of Philippe Starck’s hospitality-design career, and with Brach Paris we find him in yet another mood... this hotel, in Paris’s 16th, makes an unlikely sort of glamour, using materials from the 1970s to suit the building’s age. This means glossy wood panelling, leather, metal, vibrant patterns in earthy colors, and mirrors more or less everywhere. If you are staying at the Brach Paris, take the opportunity to have lunch or dinner at the hotel restaurant, Brach, selected by the MICHELIN Guide. 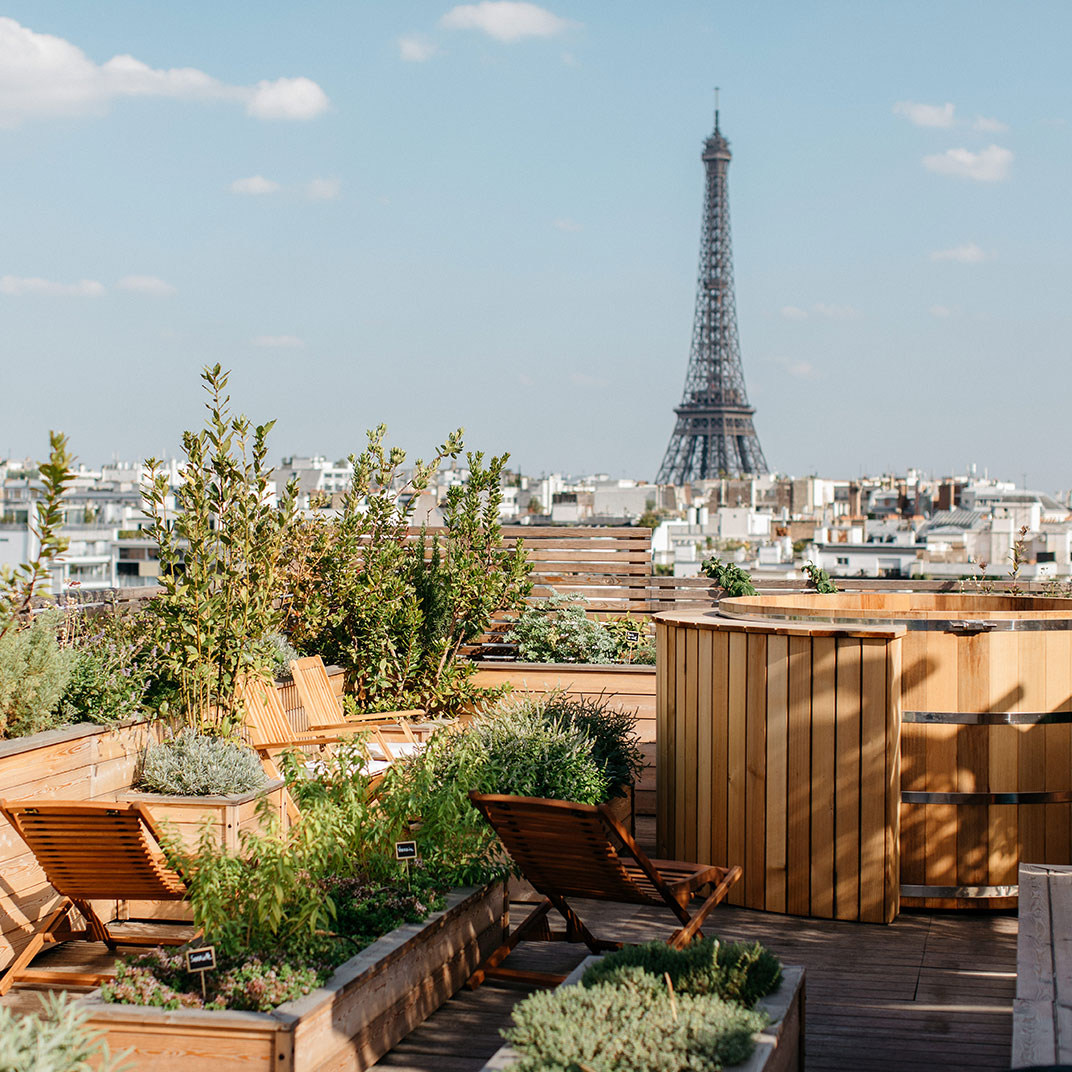 8th arr. (Champs-Élysées/Madeleine)
As Parisian neighbourhoods go, it doesn’t get much swankier than the Golden Triangle, that section of the 8th bounded by the Champs-Élysées and the Avenues Montaigne and George V. There’s no shortage of upscale hotels here, but the news that the twenties Hotel Powers has been reborn as the Hôtel Grand Powers adds another compelling destination to this already storied neighbourhood. 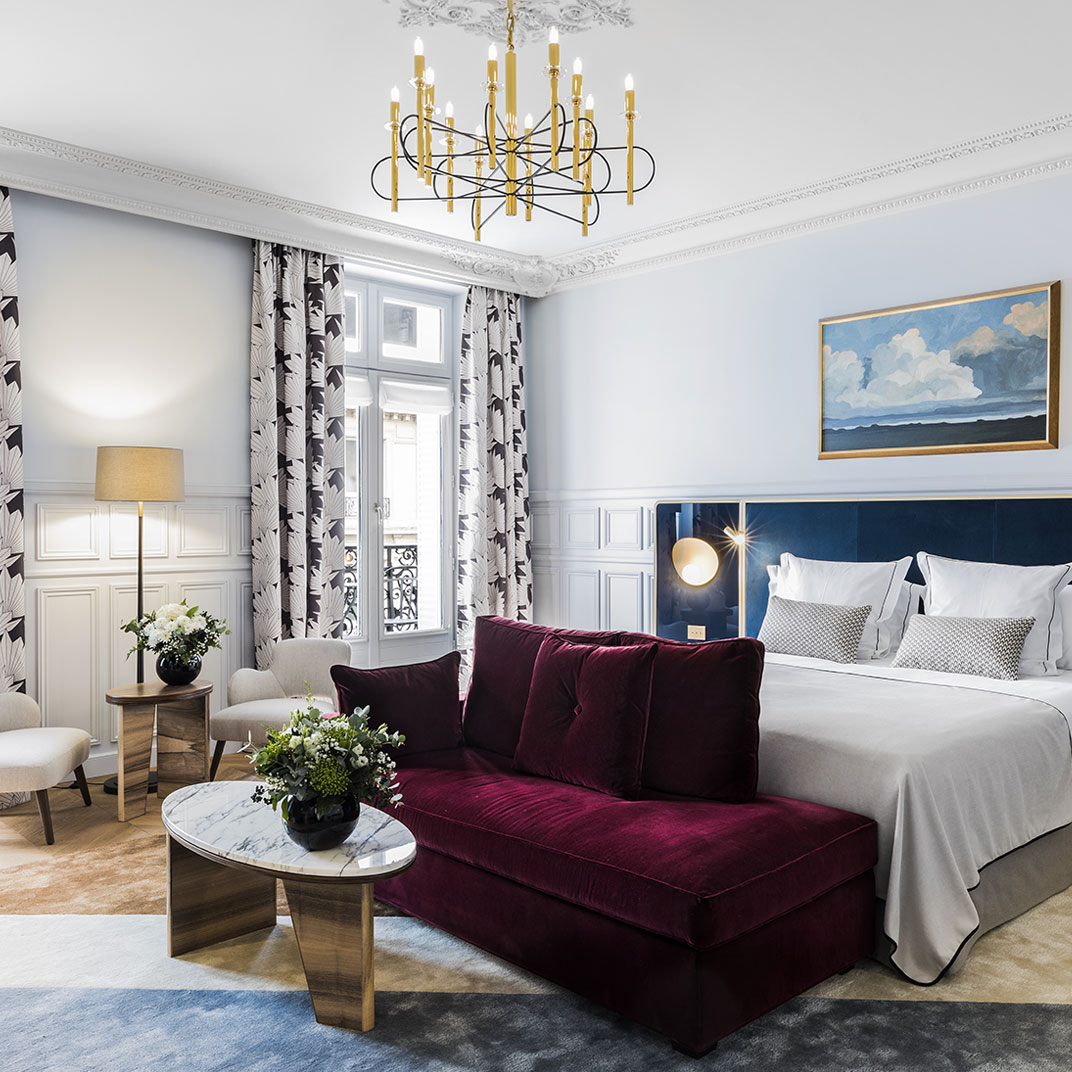 3rd arr. (Le Marais)
One of the most celebrated Parisian neighbourhoods, Le Marais is known for its aristocratic distant past, its rather more debaucherous recent history, and its current status as one of the city’s most artistic and creative districts. Hoteliers EVOK, the group responsible for Tablet favourites Brach and Nolinski, have taken inspiration from the most colourful aspects of the Marais, and the proof is in the name: Sinner evokes both the ecclesiastical orders who first established this district and the contemporary pleasure-seekers who visit it today. 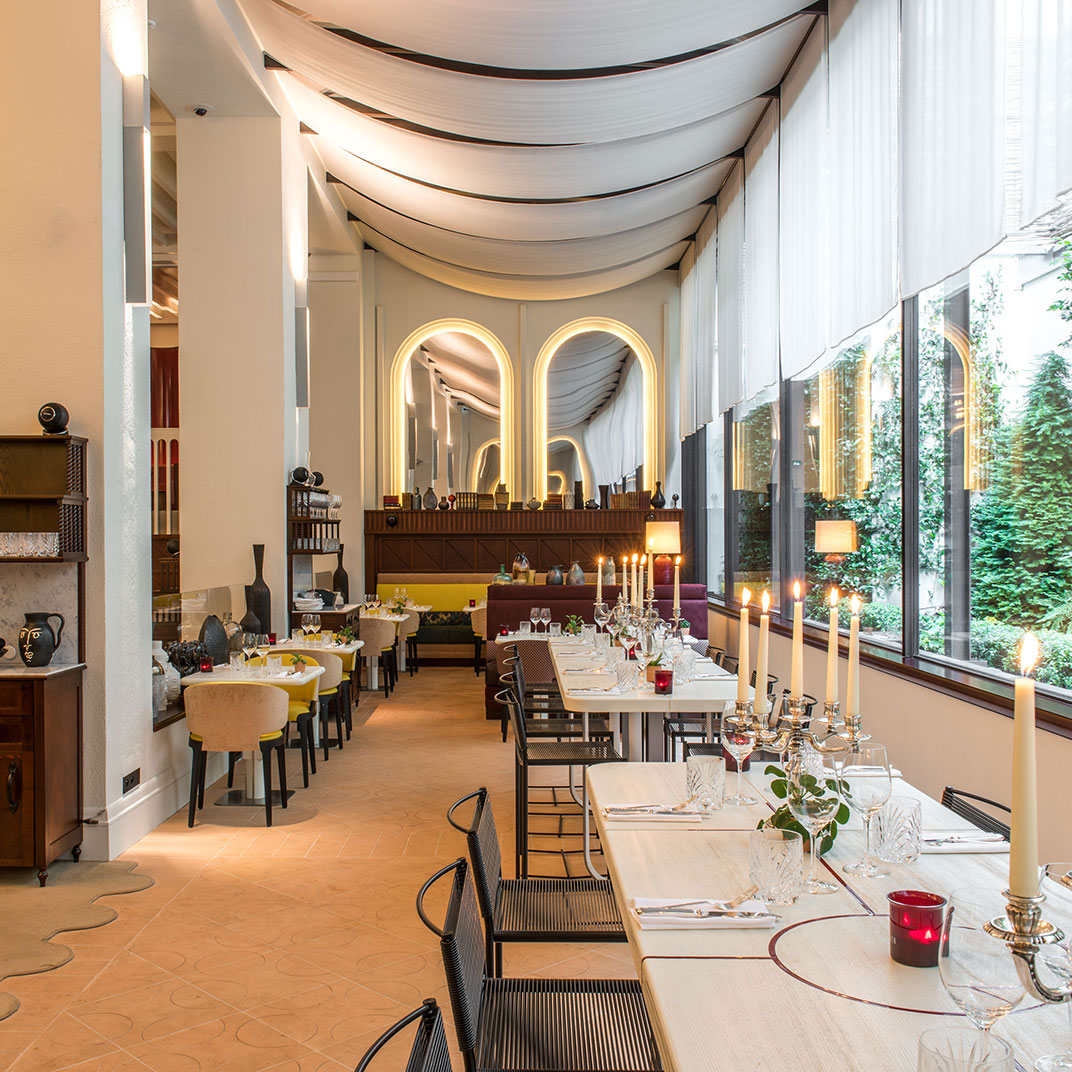 3rd arr. (Le Marais)
Studio 54, New York’s most notorious nightclub, is an ancestor of sorts (via Ian Schrager) to the whole boutique-hotel trend. But imagine its Parisian equivalent shutting its doors for a renovation and actually becoming a luxury boutique hotel, and you’ve got the basic idea of what Les Bains is all about. In the late 1800s it was a public spa, and by 1980 Les Bains Douches was a bona fide den of celebrity-studded iniquity. 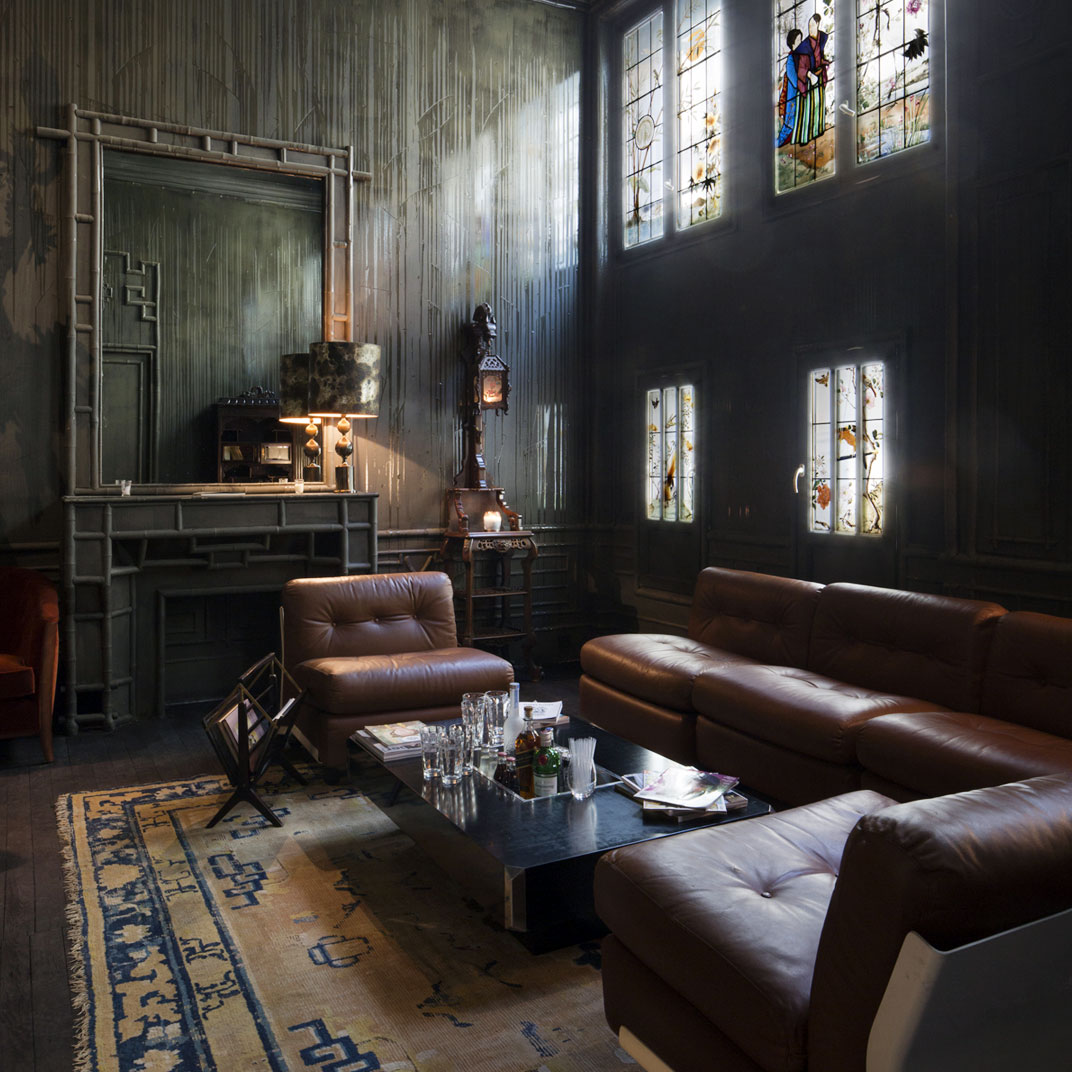 8th arr. (Champs-Élysées/Madeleine)
In Paris, one of the most-visited cities in the world, there are the old palace hotels, the new minimalist boutiques, and, as in this case, various shades in between. A newly minted classic, and a bit of a stylistic departure for Paris hotels, Hôtel Daniel comes outfitted in a sort of Silk Road, East-meets-West theme of old-world Parisian interiors with handmade Chinese wallpapers, Oriental rugs, exotic fine fabrics and Syrian antiques.

9th arr. (Opéra Garnier/Pigalle)
Paris being Paris, there’s not exactly a dire shortage of sexy hotels. But Maison Souquet, an authentic “pleasure house” in the Pigalle that’s been turned into a five-star hotel by designer Jacques Garcia, makes quite a few of them look like cold showers by comparison. Here, just across from the Moulin Rouge, he’s created a fantasy that’s opulent, mysterious, and just slightly unreal — the perfect setting for a temporary departure from the world of the mundane. 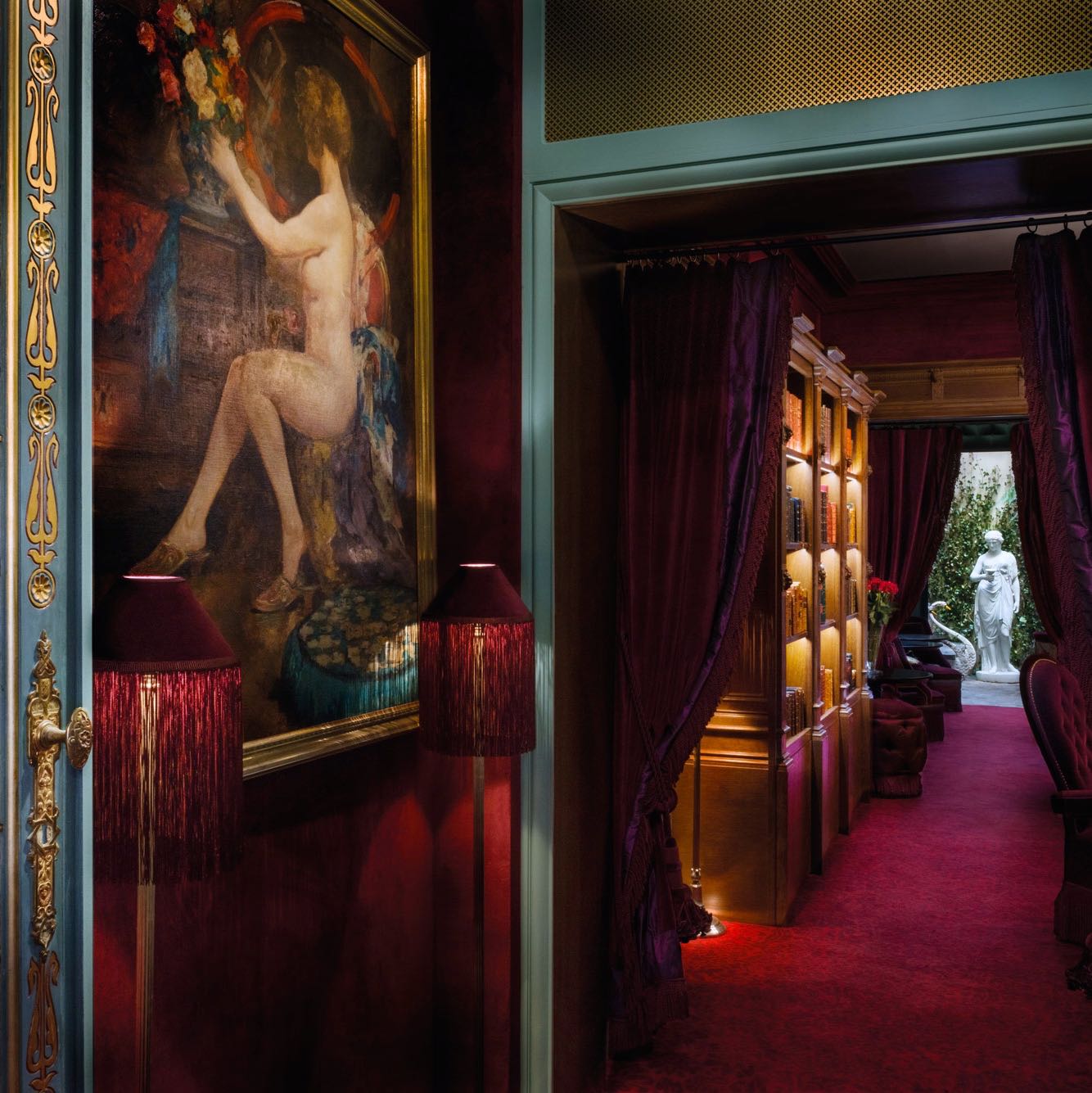 9th arr. (Opéra Garnier/Pigalle)
Near the Place de Clichy in Paris’s 9th arrondissement, close to the nightlife hotspot that is the Quartier Pigalle, is one of the capital’s most stylish and most unique boutique hotels. Hotel Le Ballu is inspired by the fictional Balkan country of Syldavia, from the Tintin comics; if the reference is lost on you, imagine a whimsical cocktail of mid-century design with a decidedly Eastern accent. 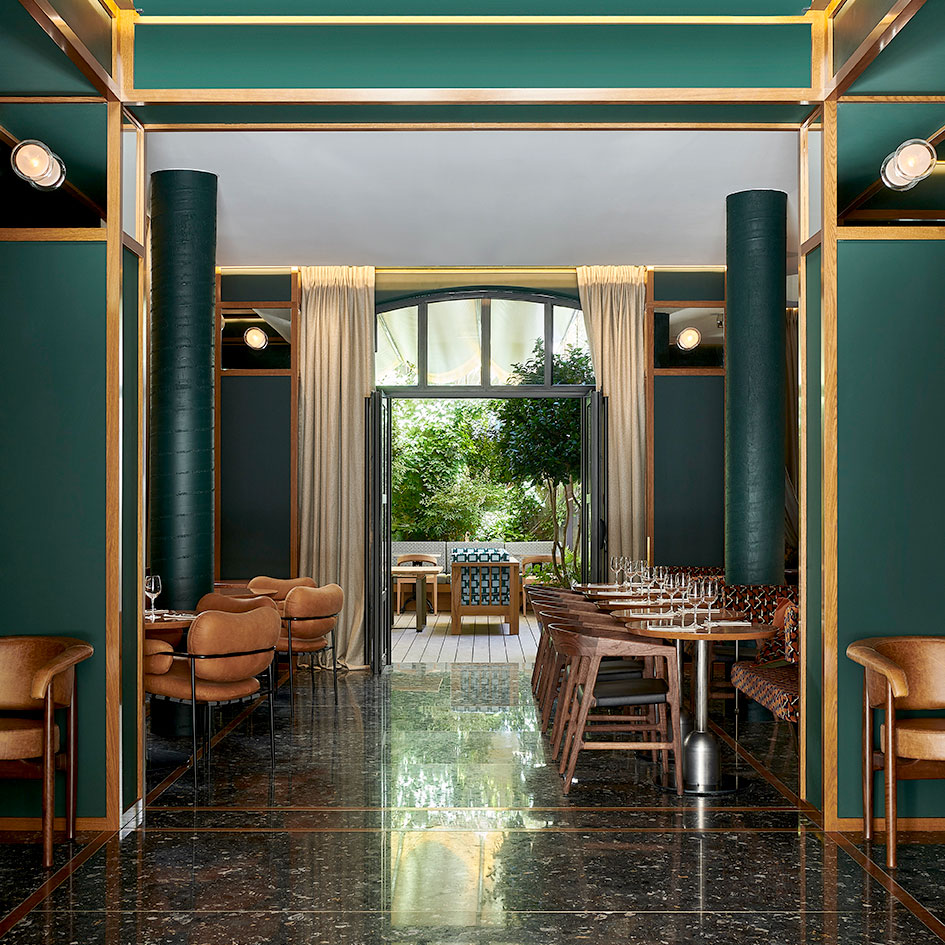 10th arr. (Gare de Nord/Gare de l’Est)
The location, where the 10th meets the 3rd, is one of Paris’s emerging hotspots, closer to Canal Saint Martin and the upper Marais than to any of the typical tourist destinations — it’s largely uncharted territory for hotels, and there’s no better feeling for a boutique hotelier than breaking new ground. 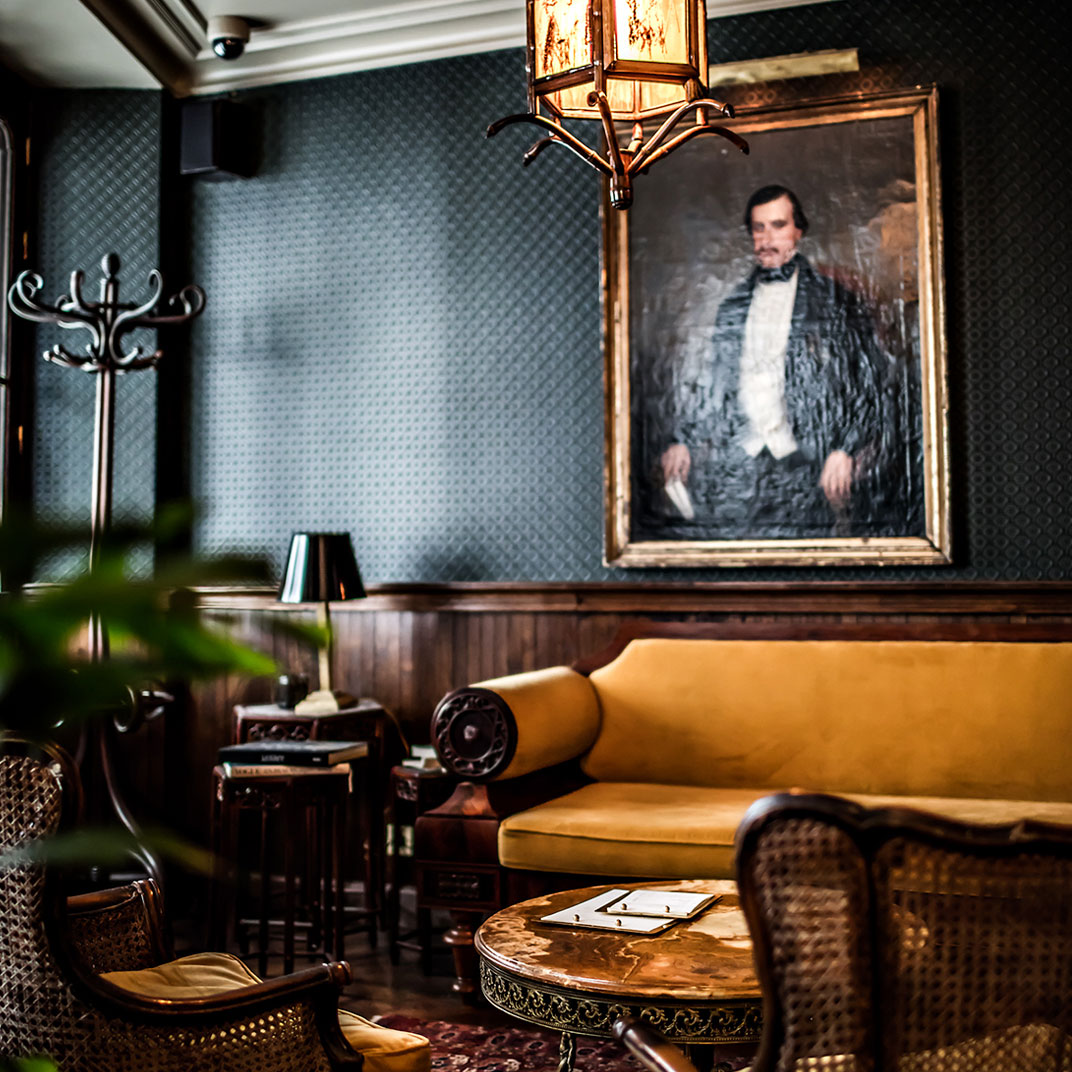 3rd  arr. (Le Marais)
The Place des Vosges, in the Marais, is one of Paris’s most unique places — the city’s oldest planned square, it was once home to authentic nobility, and its gardens remain even as the city has grown around it. Now it’s been rediscovered by a new, stylish set, including Evok Hotels, the name behind Parisian Tablet favorites like Nolinski and Brach. Cour des Vosges is the latest work in their portfolio, and it stands proudly over the corner of this majestic square. 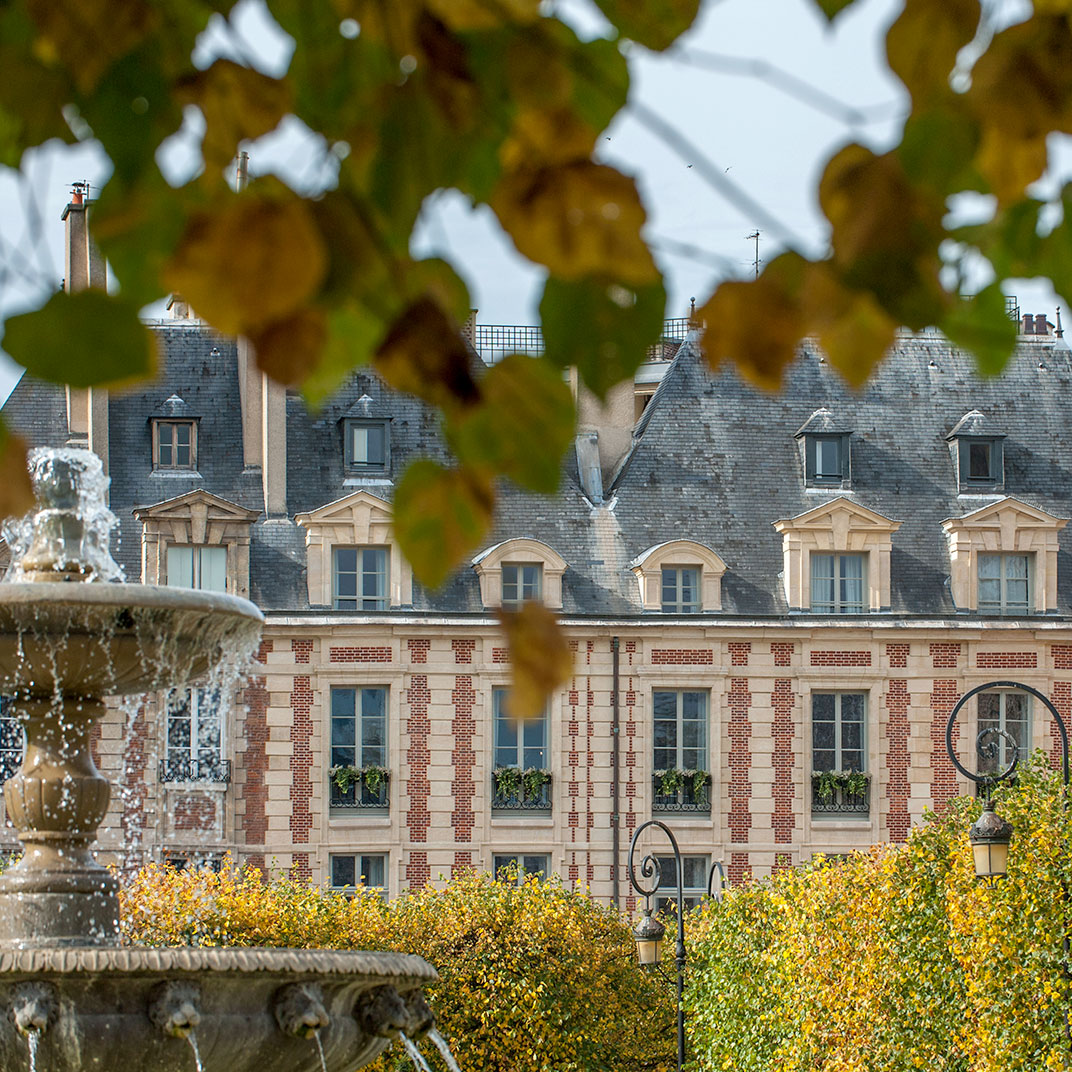