Today, he’s happily settled into a routine where no one day is ever the same.

On the morning of January 21, when Mauro Colagreco received the phone call he’d spent a career waiting for, Benoît Huguenin was 5,500 miles away, in Tulum, Mexico. It was around 3:00 p.m. in France by the time the 24-year-old woke to messages bearing good news from colleagues: Mirazur had been awarded its third MICHELIN star. He may not have been on home soil to celebrate that evening, but Huguenin toasted the achievement with the next best thing: “cerveza,” he laughs.

“It’s magic,” he beams when asked how it feels to be head sommelier at a three-MICHELIN-starred restaurant, the hint of fatigue in his voice suggesting Tuesday mornings like this one are usually reserved for sleep. He has accomplished a lot for his age. “I have,” he agrees, “but I have been working in hospitality for 10 years now.” He came to Mirazur from another one of the French Riviera’s decorated restaurants: the one-star Paloma in Mougins.

Today, he’s happily settled into a routine where no one day is ever the same. Along with the restaurant, open five nights a week, there are private events to help coordinate: weddings, gala dinners or private soirées onboard yachts. Colagreco has other dining concepts around the globe, so there’s also plenty of opportunity to travel. 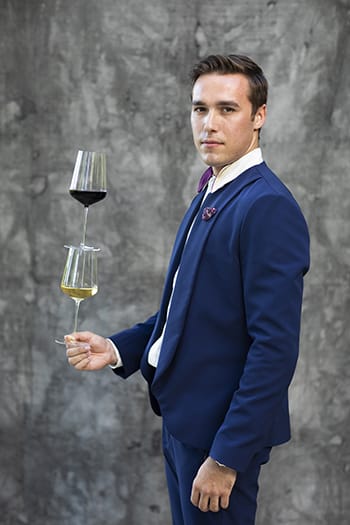 The week every six months or so spent helping out in the restaurant’s vegetable garden and looking after its chickens (including a hen called Tina Turner), sounds like pure bliss. “We never stop,” he admits, “but I wouldn’t have it any other way.”

Mirazur’s location in Menton, the pretty seaside town found at the foot of the Maritime Alps and a stone’s throw from the Italian border, is part of what makes it such a “magical place,” he says. “It couldn’t be anywhere but here because it’s also thanks to the environment that we have—the sea, the mountains and the garden—that we can do what we do here.” Colagreco’s cuisine follows both the season and his inspiration, blending an abundance of local flavors with unbeatable views out across the Mediterranean Sea for a menu that changes daily.

In 2015, the year Huguenin started, the restaurant was already regarded as one of the world’s best, having achieved its second MICHELIN star three years previously. “The first words chef Mauro said to me were, ‘I don’t want a classic sommelier,’” he recalls. “He told me, ‘I don’t want a machine. Every guest is special. Every lunch and every dinner is special.’” Earning that extra star, as well as ensuring guests have the best possible experience at Mirazur, has been his entire focus ever since.

The wine list Huguenin inherited was weighed down with classic French wines from négociants such as Louis Jadot and Domaine Faiveley. “Of course, they were good wines,” he acknowledges. “But everyone can drink them. We wanted to offer wines we can’t always have.”

He has focused on introducing smaller, boutique producers from around the globe and has a preference, where possible, for biodynamic and natural wines. Understandably, the wine regions found close to the restaurant, including lesser-known appellations such as Rossese di Dolceacqua DOC in Liguria and Bellet AOP in Nice, are represented. “But we don’t include local wine just for the sake of it, we only want the best,” he says. 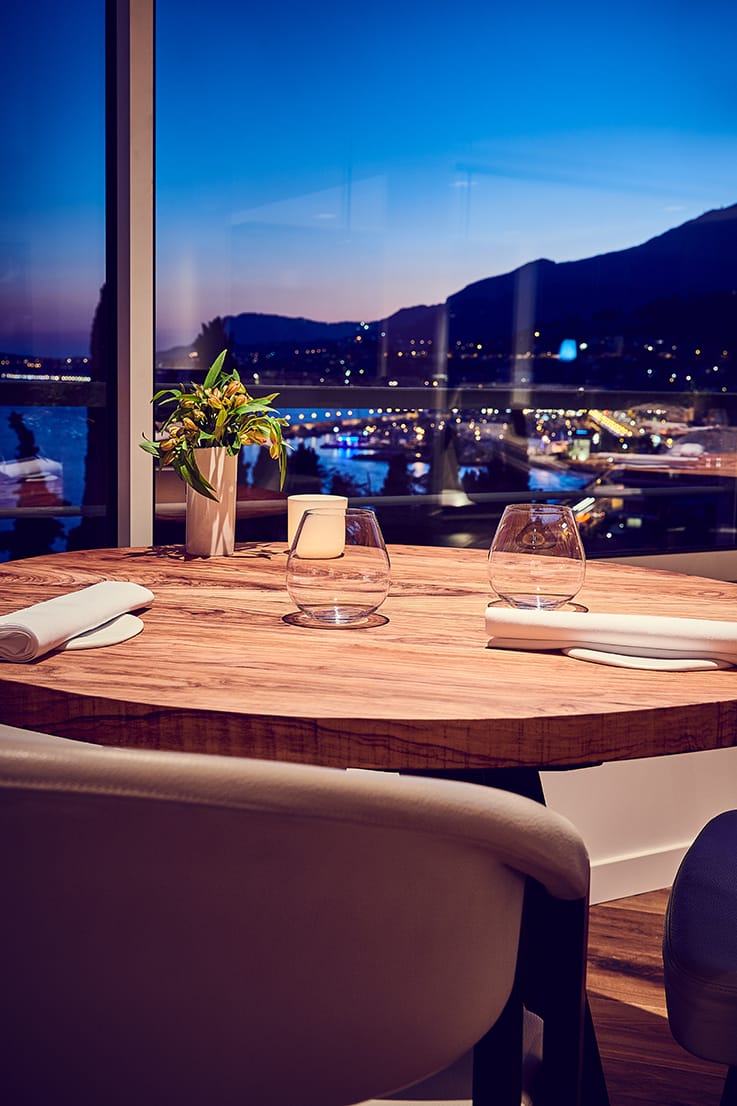 A selection of eight wines (six whites, one red and one sweet wine) are matched to nine courses; exactly what is served depends on the day and the cuisine. (Photo by Nicolas Lobbestael.)

Guests can choose to order by the glass (a selection that changes daily) or the bottle (the wine book is 22 pages long), but it’s the wine pairings, and seeing people’s interaction with them, where he finds the most job satisfaction. A selection of eight wines (six whites, one red and one sweet wine) are matched to nine courses; exactly what is served depends on the day and the cuisine. There are three pairings: notre terroir, which includes wine from Provence, Corsica and Liguria; un accord sans frontiers featuring wine from around the world; and d’exception for special wines and vintages. “Guests have more pleasure with the wine pairings now than four years ago, when there was only one to choose from,” he says.

Of all the food and wine combinations, it is the squid bagna cauda and Testalonga Bianco from Dolceacqua that he names as his favorite. One of Colagreco’s signature dishes, the squid comes from the Italian seaside town of Bordighera, less than 30 minutes from the restaurant. The vineyard is found just inland. As with the best pairings, it’s also one that evokes special memories. “Mauro’s wife Julia hates squid, so one day he decided to cut it into tagliatelle-like strips for her,” he recalls. Served with a typical Ligurian sauce of garlic and anchovies and accompanied by seared artichokes, it had the desired result of changing her mind on the seafood. “She loved the ‘special pasta’ and now it’s the only dish she’ll eat with squid,” he smiles. Matched with a glass of Testalonga’s Vermentino—the classic Ligurian white grape—“it’s incredible,” he says.

Growing up among the vineyards of Châteauneuf-du-Pape, Huguenin’s passion for wine was sparked when he started tasting with his father. Today, however, he displays a distinct preference for the whites of the Loire Valley—in particular, Chenin Blanc, which he thinks is the best white grape in terms of complexity and diversity. “Right now, I love the Saumur Blanc Clos de Carmes Domaine Guiberteau 2013. It’s excellent paired with Mauro’s cuisine.”

The restaurant may now be fully-booked until 2020, yet Huguenin says that the philosophy and individual touch that earned Mirazur its third star isn't changing anytime soon, nor is he. After all, it's exactly what got them both there in the first place. 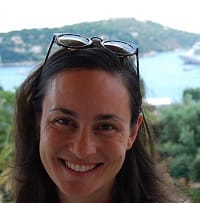 Chrissie McClatchie is a freelance writer with a background in fine wine sales. Hailing from Sydney, Australia, she has called the South of France home for more than a decade.