A host of famous chefs, including Tom Kerridge and Paul Ainsworth – both owners of MICHELIN-starred restaurants – have recently brought attention to the plague of restaurant no-shows; where guests fail to turn up for their meal despite having booked, leaving the restaurant out-of-pocket.

No-shows are nothing new for the hospitality industry. But for restaurants struggling to stay afloat post-lockdown, they now have even bigger implications than before. Social distancing rules mean that many restaurants have had to reduce the number of covers they serve. On any given day, ingredients will have been ordered in and staff numbers will have been adjusted, so just a small number of no-shows can have an enormous effect. Add to this the fact that business is reportedly down for restaurants by up to 40% and it is clear that no-shows are a very big issue right now.

When 27 people failed to turn up to Kerridge's Bar & Grill in the Corinthia Hotel in London, on a Saturday night in July, owner Tom Kerridge branded these no-shows ‘disgraceful, short-sighted and downright unhelpful’ on Instagram. Thousands posted messages of support including fellow chefs Jason Atherton, who suggested Kerridge should ‘name and shame’ the no-shows so that every restaurant could block them, and Tom Aikens, who pointed out that ‘all it takes is a few seconds on a phone to cancel or change a booking’. 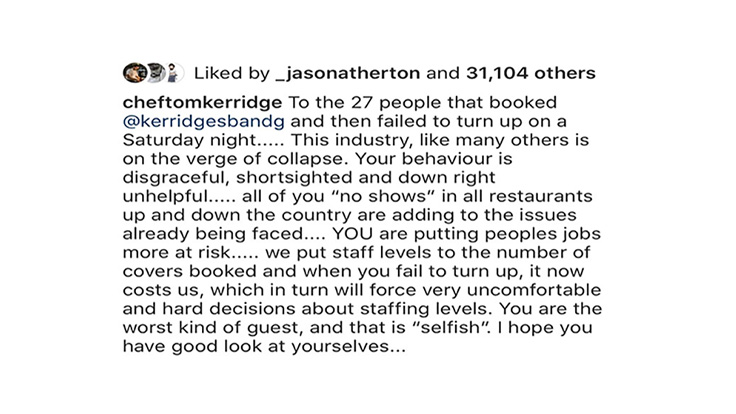 Just a few days later, Paul Ainsworth suffered the same fate, with 27 no-shows at The Mariners in Rock, Cornwall. He too took to Instagram to express his understandable frustration at this shameful practice, and to draw attention to the huge number of people affected by such behaviour – not just the business owners but all the staff and their families too. 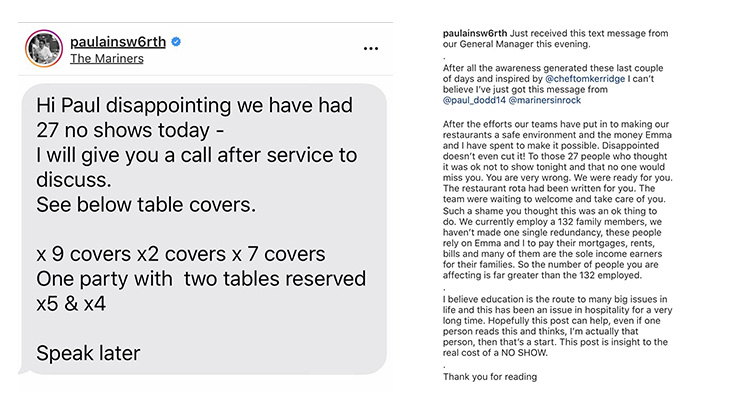 Bib Gourmand award holders Westerns Laundry in Islington, London, also posted on Instagram about the unusually high number of no-shows they have experienced, and went into detail about the hidden costs involved when people fail to honour a booking.

Pre-Covid, restaurants would have relied on walk-ins to counteract the effect of no-shows, but for most restaurants, this has now become difficult ‘for logistical & safety reasons’. Even if restaurants are still able to accept walk-ins, passing footfall is significantly reduced, especially in central London. Overbooking to allow for no-shows and waiting lists are two more ways in which restaurants would have ensured that they were full to capacity pre-lockdown; avenues which are unfortunately no longer viable. 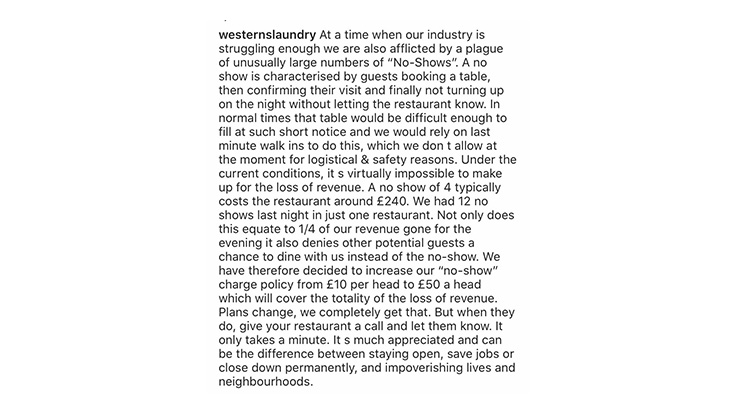 How to put a stop to no-shows?

In the past restaurants might have felt happy to rely on mutual trust, but what can be done by those who no longer feel able to count on the common sense and decency of the general public?

Firstly, attention needs to be brought to the issue so that customers can see the devastating effect they can actually have on a business when they do not turn up. Posts on social media – like those above – are doing much to educate people, reminding them that if they are going to be unable to dine, customers need to let the restaurant know, either by phone or by email. Various social media have also recently highlighted the appalling practice of customers booking several different restaurants before deciding at short notice where to go.

The #nomorenoshows campaign, started in Manchester by hospitality consultancy firm Sixty Eight People, has been shining a light on the issue of no-shows, urging customers to cancel a booking if their plans change and they can no longer attend. Use this hashtag to spread the word! 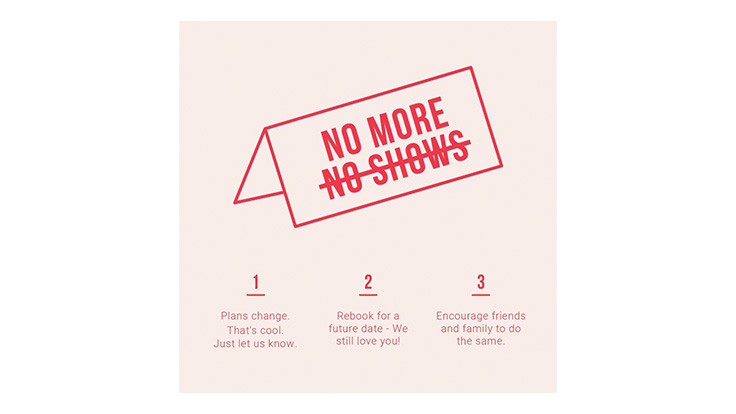 Asking customers to pay a deposit is one way in which restaurants can avoid no-shows, or at least mitigate their effects on their business. Adam Handling has introduced a post-Covid booking deposit of £62.50 per person in order to continue to keep his business viable, given that he has had to reduce the cover count. Other restaurants protecting themselves in this way include Two MICHELIN-starred Midsummer House in Cambridge, which takes a deposit of £50 per diner and Three MICHELIN-starred The Fat Duck in Bray, which takes a deposit of between £250 and £325 per person.

Should restaurants now be asking customers to pay in advance for the whole meal, in the same way they would have to for theatre or cinema tickets, air fares, or tickets to a sporting event? A number of well-known restaurants around the world already do this and find that genuine customers are happy to pay as they have every intention of turning up and eating the meal, meaning that it is only ‘time-wasters’ who suffer. It could also be argued that this is the safest option in the current climate, given that it means the restaurant knows exactly what a customer will be eating in advance and so there can be minimal contact once the customer is in the restaurant. 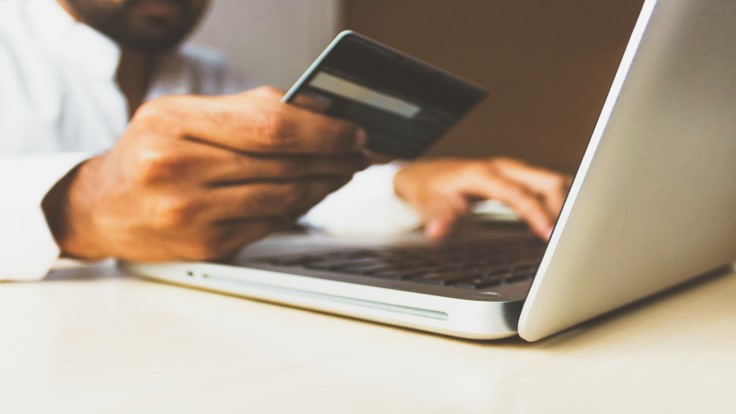 A middle ground perhaps is the taking of credit card details in order to charge customers who fail to show up. This benefits guests in the long-term by keeping costs low, since no-shows force restaurants to push prices up in order to recoup their losses.

MICHELIN-starred St John in Clerkenwell has introduced a charge of £20 for no-shows since reopening on 29th July. And given their trouble with no-shows, Westerns Laundry have now decided to increase their no-show charge from £10 a head to £50 per diner.

Whether we like it or not, Covid-19 has changed the way hospitality does business for the foreseeable future. This means that we increasingly need to find new, innovative ways of dealing with old problems – and no-shows are one of the oldest and most pernicious of problems.

The fact that the issue of no-shows is in the public eye – being discussed on social media, in the newspapers and even on national television – is an extremely positive step because behaviour is much more likely to change if people can see the repercussions of their selfishness. Not until customers appreciate the work that goes into running a successful restaurant and the tiny margins that separate success from failure, will they understand why no-shows need to stop.

What was once a matter of manners has now become a matter of survival: post-lockdown, livelihoods are at stake in an industry that is already on its knees. Plans change, things happen – we get that. But do the decent thing – do the right thing – and let the restaurant know!