Try your hand at Manuel Berganza’s winning paella dish in Netflix’s The Final Table, which comes with the essential crunchy layer at the bottom of the pan.

In Netflix’s reality TV cooking competition The Final Table, professional chefs with celebrated restaurants from all over the world compete by cooking a different dish from a different country in every episode. Spanish chef Manuel Berganza represented Singapore on the show, where he and competition partner Benjamin Bensoussan impressed the judges early in the show with their classic, flawless execution of Paella Valenciana. The duo were confident about the paella, looking almost gleeful when the national dish of Spain was announced as the competition dish in the second episode.

RELATED: Watch What You Eat: The Real-Life Impact Of TV Cooking Competitions 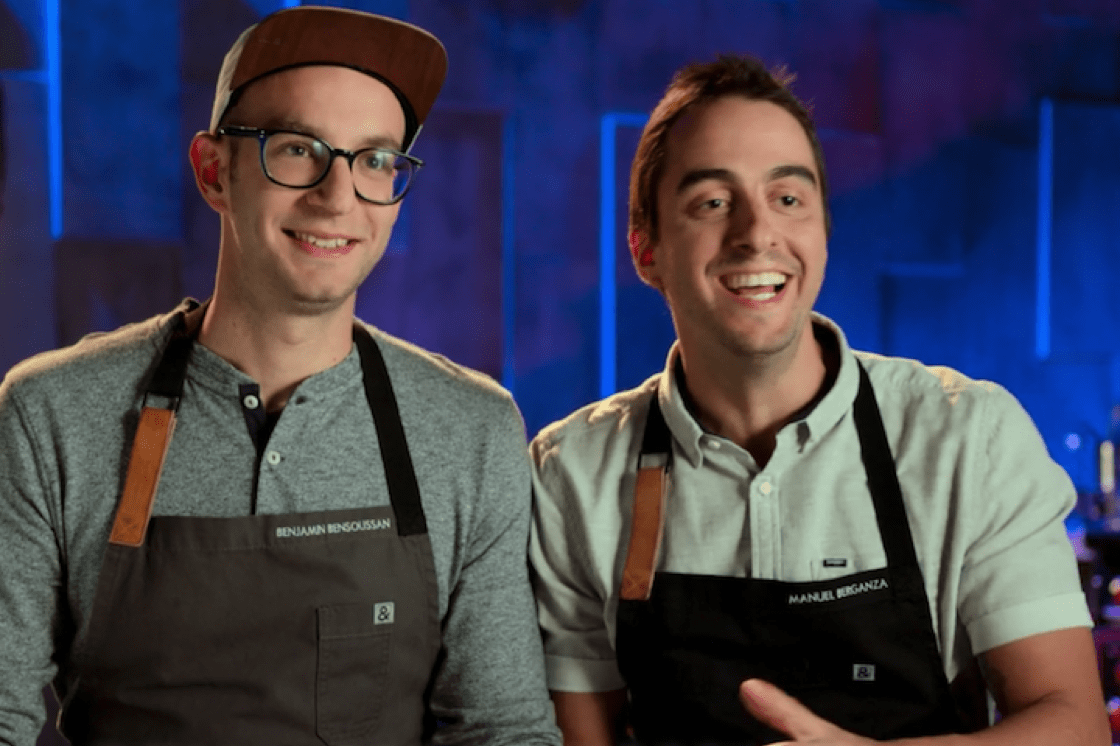 Benjamin Bensoussan (left) and Manuel Berganza on The Final Table (Pic: Netflix)
“From the first episode, we knew that the judges were looking for traditional dishes. As Spanish chefs, we felt the pressure to be the best for that challenge, but at the same time I was confident, because I know my paella,” said Berganza.

He knew what the judges were looking for in a faultless paella: a rich stock that would imbue the grains of bomba rice with full-bodied flavour, perfectly cooked ingredients and, most important of all, the elusive, crunchy socarrat at the bottom of the pan. The crispy crust of caramelised rice is considered the most prized part of any paella dish, traditionally reserved for the most important guests at the table.

Not surprisingly, Berganza and Bensoussan’s faithful take on traditional Paella Valenciana came out tops in that week’s challenge. “Now Benjamin says we have to open a restaurant in Madrid selling our ‘Netflix Paella’, but no, we know each other too well to ever open a restaurant together,” Berganza says, laughing. 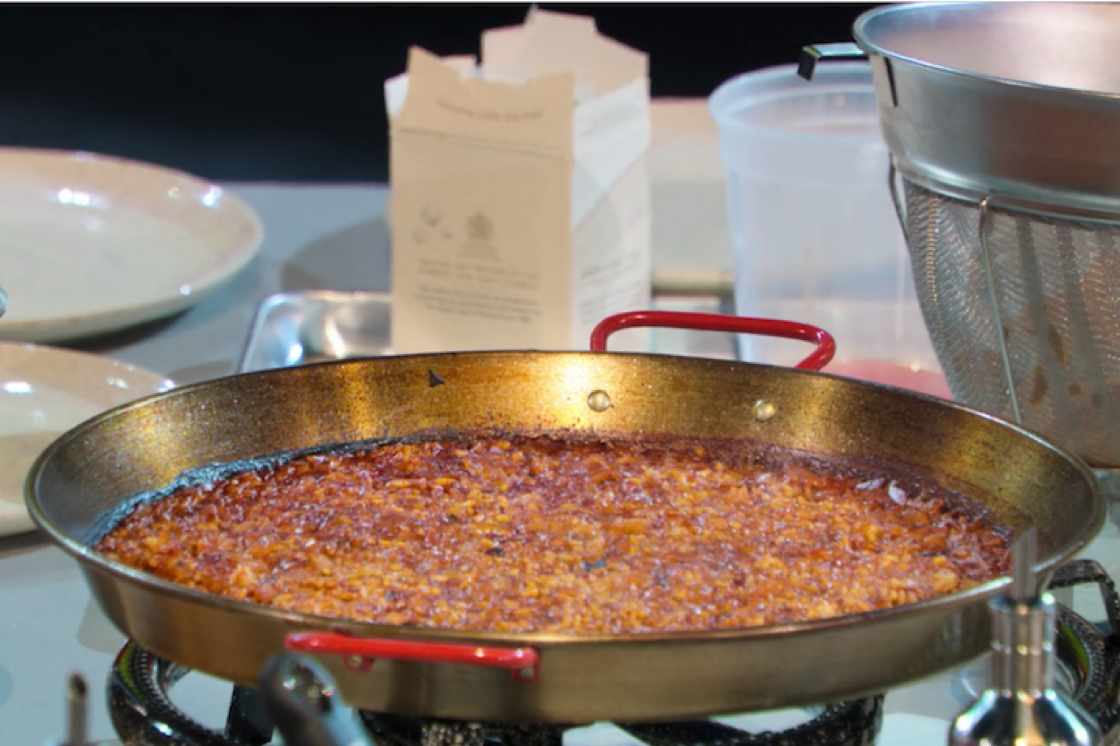 Paella is traditionally cooked in a paellara (Pic: Netflix)
Berganza’s list of culinary accolades include leading restaurants like Sergi Arola Gastro and New York’s Andanada 141 to Michelin-star status. Today, he is the executive chef of Tapas Club in VivoCity and Orchard Central, where you can go to get a taste of his paella and purchase bomba rice and a paellara pan from the adjacent retail space to try your hand at this recipe for his winning Paella Valenciana.

This classic paella dish originates from the city of Valencia, Spain, and the most traditional of recipes call for rabbit, chicken and snails. You can find rabbit and canned escargot in specialty grocers like Huber’s Butchery at Dempsey Hill, but if those are hard to source, they are easily substituted with your choice of seafood or other proteins like squid and chicken. 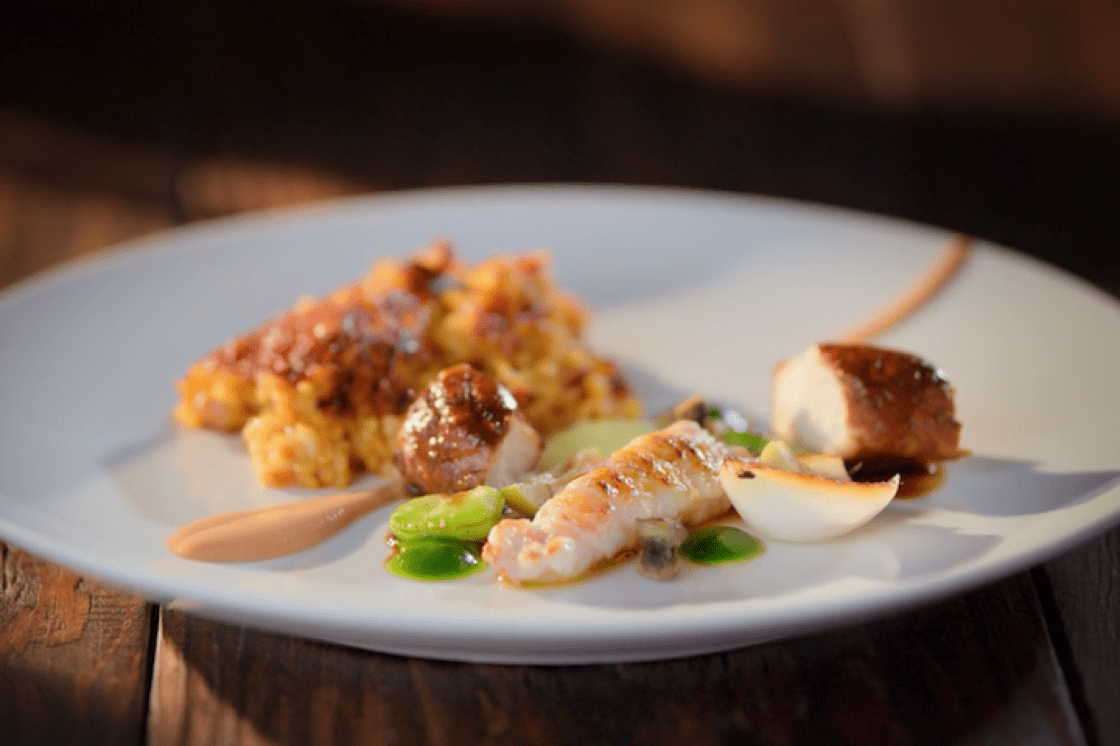 Method:
1. Heat a paellara pan over medium-high heat and coat with olive oil. Add the rabbit, salt and pepper. Sear until golden, then remove from the pan.
2. In the pan, add some olive oil and sauté the onions, garlic, red peppers and tomatoes until caramelised.
3. Add the saffron, beans, rabbit and snails. Pour in the chicken stock and let it boil for five minutes. The goal is to make a rich broth that the rice will absorb.
4. Add the rice and let the mixture come to a boil for about 18 minutes, until the broth is almost entirely absorbed.
5. Finally, add the rosemary stalk for more flavour.
6. Finish the rice over low-medium fire to get the socarrat. To test if your dish is ready, insert a spoon vertically until it reaches the bottom of the paella. If the bottom feels crunchy and hard, the soccarat is ready.
7. For the aioli, mince and mash garlic to a paste with a pinch of salt using a large heavy knife. Whisk together the egg yolk and apple cider vinegar in a bowl. Combine the olive oil bit by bit, until the mixture is emulsified. (If the mixture separates, stop adding oil and continue whisking until mixture comes together, then resume adding oil.)
8. Before serving the paella, pipe some aioli onto the rice for a creamy finish.