On a quintessential Southern Californian evening a few years ago, Chef Gary Menes was serving a 10-course tasting menu to a small group of diners. The sixth course, typically a crescendo of meat on ambitious tasting menus like his, was, in fact, a 60-day aged Musquee de Provence — a slice of pan-seared pumpkin. Menes moved from plate to plate, shaving flutters of white mushroom over each serving. Not white truffles but a humble white mushroom.

As one of those diners, that was the moment I understood exactly what Gary Menes stood for as a chef. In his words, it’s about putting the vegetable on a pedestal. Menes has been preparing his vegetable-forward tasting menu since 2011 (the concept was a pop-up for three years before landing at its current address within the Hotel Normandie in Koreatown). Menes grows most of what shows up on the plate at his 5,000 square foot urban farm in Long Beach. His intimate 10-person counter, aptly called Le Comptoir, was awarded One MICHELIN Star in the inaugural edition of The MICHELIN Guide to California 2019.

Menes credits influential French culinary figures like Jean Louis Palladin, Alain Ducasse, and Jean Banchet with pulling him into the deeply romanticized and highly competitive world of fine dining. “The elegance they had in moving through the kitchen; the authority and confidence they had. That was beautiful to me. And it still is,” he said. It’s why he sought out work in classically-driven kitchens like Patina and The French Laundry. However, Menes’ connection to food is much deeper, and far more fated, than that.

Born to Filipino parents, Menes spent his formative years living abroad. Menes’ father had enlisted in the US Coast Guard from the Philippines, which was a US territory at the time. As a non-citizen, he was only eligible to join as a cook or a steward. He opted to be a cook. (Menes’ grandfather was also a talented cook in the Navy and, according to Menes, his prime rib was legendary.) His father eventually became an engineer, but working in the Coast Guard meant moving every few years. It was a stay in the region of Calabria, Italy that etched itself so deeply into Menes’ memories.

His family would often drive hours just for a taste of winter chestnuts, a fond reminder of chestnuts in the Philippines. Or they would spend the day searching for the best singeing-hot calzone, freshly fried in olive oil, eaten in the backseat of the family Fiat. These moments had a lasting impact on Menes; an unplanned result of his parents' joie de vivre. “I don’t think they ever intended for me to be a chef, but those are the memories you’re constantly searching for,” he told me. 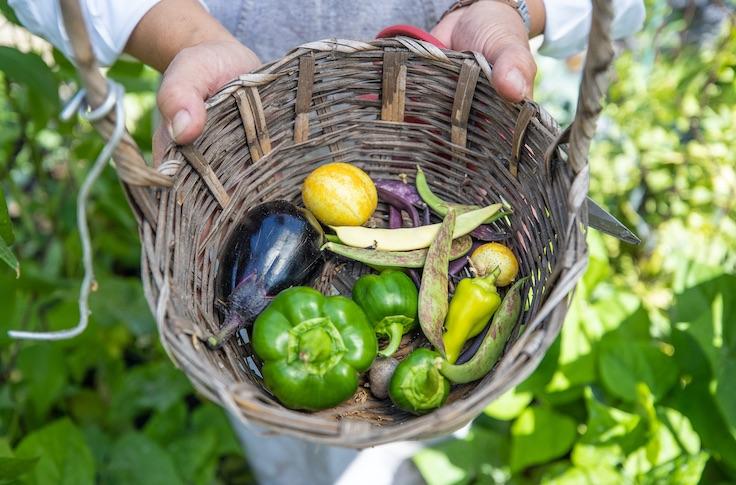 Eventually, three generations of the Menes family settled in Long Beach, California. Menes’ grandparents started growing and selling vegetables not commonly found in supermarkets at the time but longed for by other immigrant communities. Menes recalls being in their garden and around dirt all the time. Though food was an interest even then, as the first-born son to immigrant parents, Menes was encouraged to be practical and to go to college.

He complied, graduating with a degree in business and a minor in art history from Cal State Dominguez Hills, but the magnetic pull of the kitchen was impossible to resist. Menes intended to enroll in a culinary program after college, jumping from one school to another, but he didn’t have the requisite restaurant experience. So instead, Menes received his culinary education in the kitchens of notable California restaurants.

He started as a young stagiaire at Joachim Splichal’s French restaurant, Patina. Here, Menes was thrust into to the adrenalin-fueled hustle that powered one of the country’s finest dining rooms. “We would do 250 covers — it was some of the best food in all of the US — and we would only have two burners each,” he said. As a cook it was stifling, but as a business owner, Menes now understands the financial constraints of running a successful restaurant. It’s one of the most important lessons he learned from Splichal.

Menes moved to San Francisco to stage with Sylvain Portay at The Dining Room at The Ritz Carlton. He quickly got a taste of the notoriously cutthroat brigade kitchen. Menes recalls the cuisine from Portay’s kitchen as full of spirit and brimming with character, but the work to get it done took its toll. “It was physically the hardest kitchen I have ever worked in,” he said. But this too was critical experience. The level of trust required in a large kitchen, which he saw lead to disappointment and then anger, pushed Menes in the opposite direction.

“I only have 10 seats and six services a week,” he said of Le Comptoir. “This is all by design. If you can control how many guests you have and the choices they make, you’ve just eliminated all of the variables. And the variables are what give you the stress.” It’s also why he only has two to three people working with him at any given time. It may not afford him the same financial upside as his peers who own larger restaurants, but it gives him the ability to prioritize relationships — with his family, his suppliers, and his guests — over money.

After his rigorous experience at The Ritz, Menes headed further north to work at Thomas Keller’s The French Laundry in Napa Valley. Here, he cooked alongside names like Achatz, Short, and Ziebold. If Patina taught him resourcefulness and The Ritz was a lesson in hard-earned technical skills, The French Laundry was a utopia of luxury and civilized professionalism. For Menes, Keller’s kitchen was the epitome of grace, and yes, finesse.

When I asked Menes where he sees himself in relation to these men, he believes each has played an integral role in defining who he is and who he is not. “Aesthetically, I’m almost nothing like them, but philosophically, everything like them,” he said. Perhaps the divergence on the plate occurred because Menes is both the farmer and the chef. Why would he mess with his own work in search of a perfect tourné? As Alain Passard, a pioneer of vegetable-centric fine dining and Menes' role model, might say, a leek should look like a leek.

Menes’ tasting menu is anything but rustic. His multi-course chef’s tasting is framed by complex sauces and prep-heavy garnishes. A single course — the vegetable and fruit plate — has well over ten ingredients combining peak-season produce with the precise knowledge of how best to serve it all. While he uses palate pleasers like rich cream and salty cheese, Menes is more likely to tease out deeper flavors from vegetables than he is to rely on meat. Though the exact ingredients will change, the time-intensive nature of Menes’ cuisine does not. 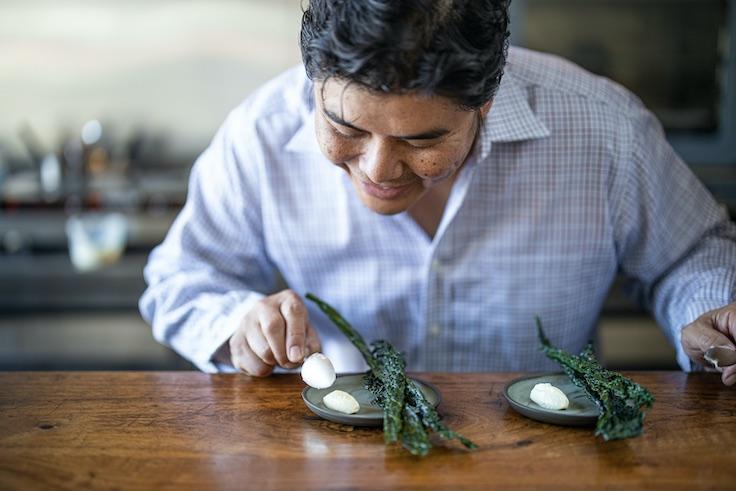 Menes was inspired after seeing the vegetarian menus at restaurants like The French Laundry. Photo © Stan Lee / Courtesy of Le Comptoir

Today, Le Comptoir is temporary closed in compliance with California’s shelter-in-place mandate. Menes spends his time working in the farm and with his family (his wife is a frontline medical worker and they have four children). He’s itching to get back into the kitchen but is adamant that the circumstances have to be right. Social distancing in such a petit dining room is just not an option. In the meantime, he is channeling his creative energy into a weekly sourdough bread bake. This isn’t just pandemic bread-baking. A slice of Menes’ expertly open-crumb sourdough has been a highlight of his tasting menu since the beginning of Le Comptoir. His starter is older than his children.

As a chef known to get deeply involved with everything on his menu, from nurturing vegetables out of the earth to geeking out on single-origin coffee, it’s no surprise that Menes hand-mills the wheat for his bread. He uses rye, Rouge du Bordeaux, and whole wheat, which he gets from growers around California. Baking is more than a hobby but capacity is limited — Menes only makes around 12 loaves at a time, and they sell out quickly.

The baking keeps him connected to cooking and to his guests. “It’s the same intense focus I would have at the restaurant," he said. "It goes with my theme. Everything is impeccable.”

On Tuesday, May 5th, Menes will be talking to the hosts of a new web-based series called The Love of Cars presented by automotive lifestyle brand, Hagerty. On the show, former pro racers Justin Bell and Tommy Kendall will be talking about incredible cars and interviewing fascinating people in the automotive world. To hear Menes talk cars with Bell and Kendall, tune in here at 7pm EST.