New York City has roughly 280 neighborhoods, some tiny (Koreatown), others stretching for 50 blocks (Upper West Side). Disagreements about neighborhood boundaries abound, but in a city as eminently walkable as New York, neighborhoods run together. Today we're in Brooklyn Heights and Dumbo, two side-by-side Brooklyn neighborhoods with very different pasts. Leafy, quiet Brooklyn Heights was developed in the early-mid 17th-century when farms first set up here. In the early 19th century, wealthy New Yorkers moved across the East River to escape the cacophony of Manhattan, traveling back and forth on a regularly scheduled steam ferry. Incredibly, the neighborhood looks much the same as it did more than 200 years ago. Dumbo, on the other hand, was all lofts and warehouses. The waterfront itself underwent a major renaissance with the conversion of a wide swathe of vacant piers into leafy Brooklyn Bridge Park.

Walk across the Brooklyn Bridge or hop on the ferry to wander around Brooklyn Heights and Dumbo with our guide on to where to eat, drink, shop, and sleep. 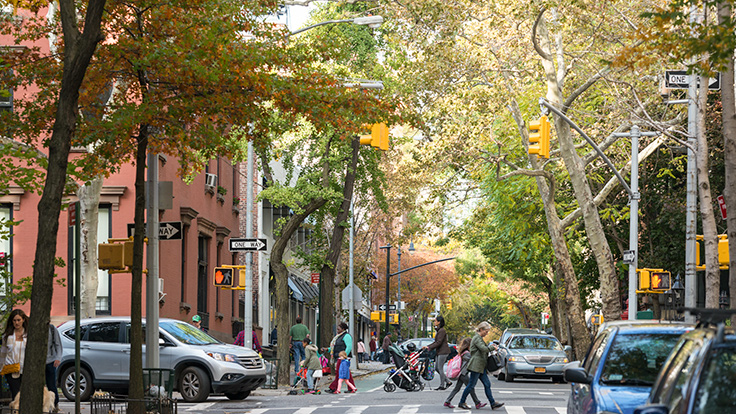 Brooklyn Bridge
There are two entrances on the Brooklyn side of the bridge. The first is at Tillary Street and Brooklyn Bridge Blvd (aka Adams St). If you're in Brooklyn Heights take this entrance (note that the first ~10' are on a sidewalk, not on the bridge). This is a walkway and is wheelchair and stroller-accessible. If you're in Dumbo, you can take stairs at Prospect St and Cadman Plaza East (aka Washington St). The bridge is roughly 1.6mi (2.6km) long and sees an average of 10,000 pedestrians and 4,000 cyclists per day.This New York icon needs no introduction. When it opened on May 24, 1883, it was the first fixed crossing between Brooklyn and Manhattan; before, you had to go by boat. After its designer died of tetanus and his son, the engineer, was felled by decompression sickness, Emily Warren Roebling took over and managed this enormous project and was the first person to cross the bridge by carriage.

Architecturally Significant Buildings
Brooklyn Heights has some of the oldest extant houses in New York, most of which went up during a mid-19th-century building boom. These are mostly rowhouses or brownstones along with a few mansions, and they range in style—Greek Revival, Neo-Gre, Italianate, Second Empire, Victorian Gothic, Romanesque, and Classical Revival, among them, and a rare few Federal-style houses like 69 Orange St; 24 Middagh St; and 24 Popular St, built in 1834 by Walter Whitman and his then teenage son, the poet Walt Whitman. Look out for the following:

New York Transit Museum
Underground in a 1936 subway station is this museum at the very edge of Brooklyn Heights dedicated to the subway system that keeps NY running. There are up to twenty vintage trains here, the oldest from 1907. Hop aboard, see what it feels like to drive a bus, walk through subway turnstiles through the ages, and learn tidbits about NYC's 24/7 subway system.

St. Ann's Warehouse
This performing arts organization was previously housed in Church of St. Ann and the Holy Trinity (see above). Its current building is an 1860 former Dutch spice milling factory. The theater puts on all manner of plays; the 2022/23 season includes Wuthering Heights from Bristol-based Wise Children, Irish playwright Gina Moxley's The Patient Gloria, and The Jungle, from London-based nonprofit theater/art community Good Chance.

Jane's Carousel
This 1922 carousel was made in Philadelphia and first lived in Youngstown, Ohio before being bought at auction in 1984 and painstakingly restored by owner/artist Jane Walentas. It was installed in 2011 in an acrylic pavilion designed by Pritzker Prize-winning architect Jean Nouvel and has been slowly spinning happy riders ever since. Hours vary; $2 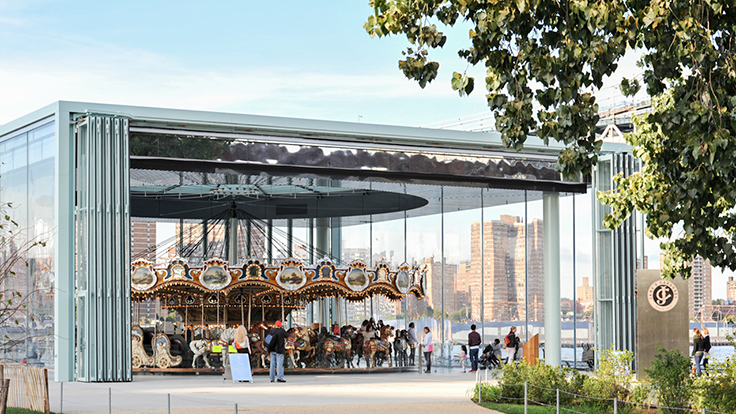 Clover Hill
Restaurants five times as large wish they could do what One MICHELIN Star Clover Hill does from its postage-stamp of a kitchen. Chef Charlie Mitchell cooks with irresistible suaveness and confidence, making the most out of top-rate ingredients, delicious sauces and thoughtful combinations. From Long Island fluke ceviche jolted with lime zest and sweet melon to Peekytoe crab salad wrapped in corn gelée and set in a pool of warm, silky corn velouté, expect to find vibrant, seasonal eating that never once feels fussy or onerous.

The River Café
Some things in life are worth dressing up for, and a visit to the illustrious River Café is certainly one of them. It enjoys, without question, one of the greatest settings of any restaurant, lying as it does in the shadow of the Brooklyn Bridge.  However, don’t come thinking that the food here will be playing second fiddle to the stellar views. The ingredients are top-notch and the kitchen team has an inherent understanding of what goes with what—imagine succulent pork belly with scallops for example, or even glistening duck breast with sweet potato spätzle. 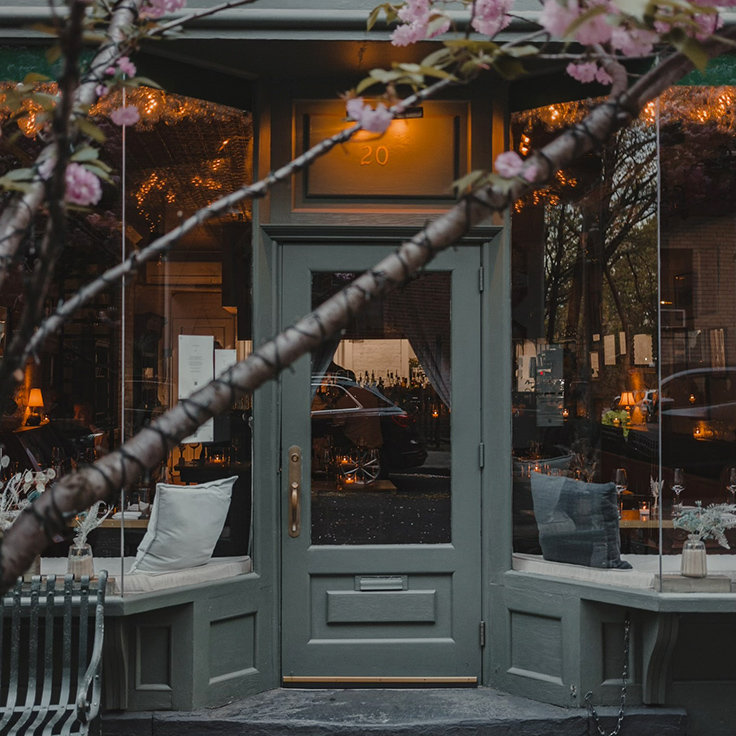 Where To Take A Break

Brooklyn Heights Promenade
This elevated walkway at the bottom of Brooklyn Heights is a nice place to walk, run, stroll, or sit on a bench and overlook the Manhattan skyline. 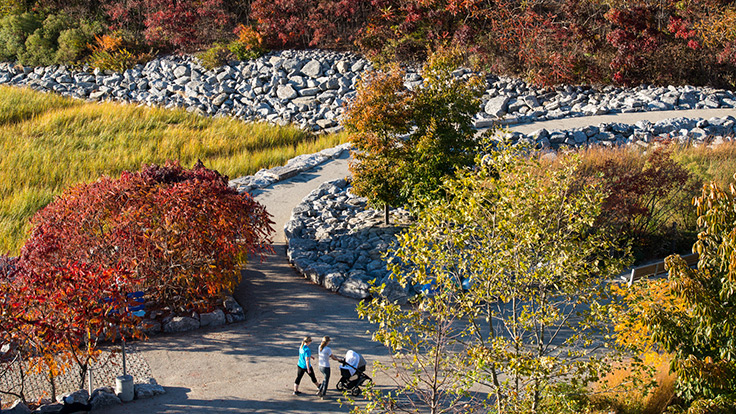 Housing Works
Housing Works is an NYC nonprofit that people living with AIDS/HIV and experiencing homelessness. Proceeds from their thrift stores around NYC go directly to this mission, so shopping here for books, home goods, clothing, and accessories, is fun and does good.

POWERHOUSE Arena
Bookstore in an airy loft with a busy calendar of readings.

Berl's Brooklyn Poetry
New York's only all-poetry bookstore that focuses on indie presses. Irregular hours, so check their Instagram @berlspoetry before you go.

Brooklyn Women's Exchange
This not-for-profit volunteer-run craft and gift shop has been selling local crafters' jewelry and home goods like ceramics and dish towels  since 1854. 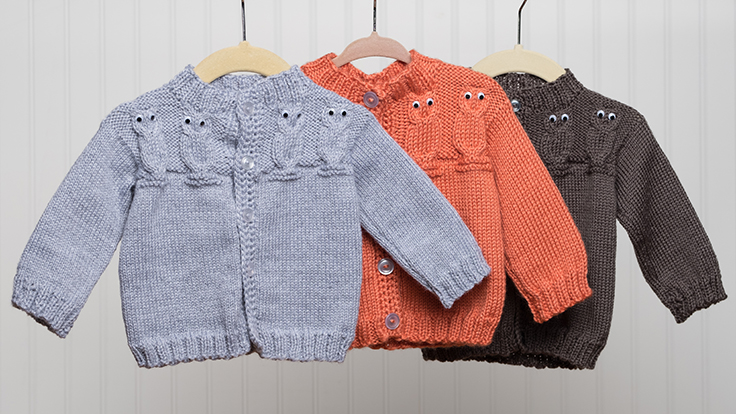 1 Hotel Brooklyn Bridge stands at the edge of Brooklyn Bridge Park, looking across the East River at the Lower Manhattan skyline, a view that’s unique among New York hotels. There’s no more fitting location for 1 Hotels’ eco-luxe aesthetic, with its salvaged materials, stylish design, and low-impact construction than here in Brooklyn, alongside the lush green park that’s been reclaimed from the city’s post-industrial waterfront. The views from the bridge-facing rooms are sublime, the Manhattan skyline and the Brooklyn Bridge.. At night the lush park is dark and pin-drop quiet, and guests can open their windows fully and savor the fresh night air and rare silence (the windows are extremely thick and not a drop of noise gets in).

The interiors make good on the hotel’s low-impact promise. The majority of the materials are reclaimed or reused, including wood salvaged from the Coney Island boardwalk and Williamsburg’s old Domino Sugar factory. And it’s green in ways that are harder to see: the building collects rainwater, releasing it to the park when needed, and the whole hotel runs on wind power.

The iconic view from the rooms can be seen from the roof, too. There's a rooftop pool for hotel guests only and restaurant-bar Harriet's Rooftop for everyone. The skyline vista is unbeatable, the buildings and Brooklyn Bridge rising over the East River. Harriet's Lounge offers the same view indoors during cooler weather. 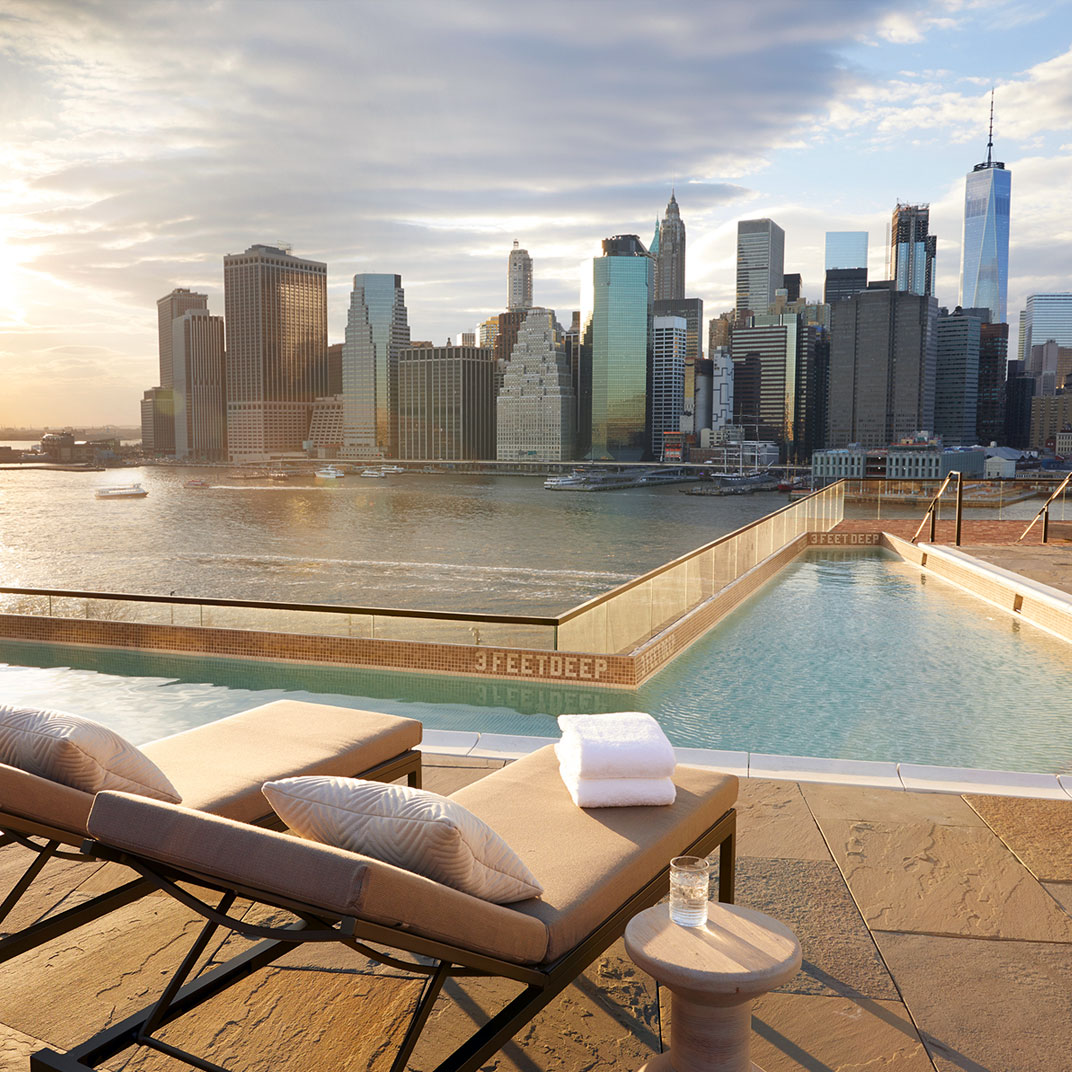 How To Get To Brooklyn Heights and Dumbo

Bike
There are loads of Citibike docks in both neighborhoods, and bike lanes on many of the streets. Brooklyn Heights is very quiet and nice for cycling. There's a bike path in Brooklyn Bridge Park, but it's very short and not meant for a long, leisurely ride.

Subway
Brooklyn Heights is very well-connected, with subway lines A, C, 2, 3, N, R, W, 4, and 5. Dumbo has just 1 subway station, the F to York Street, although you can take the A or C to High Street and walk. 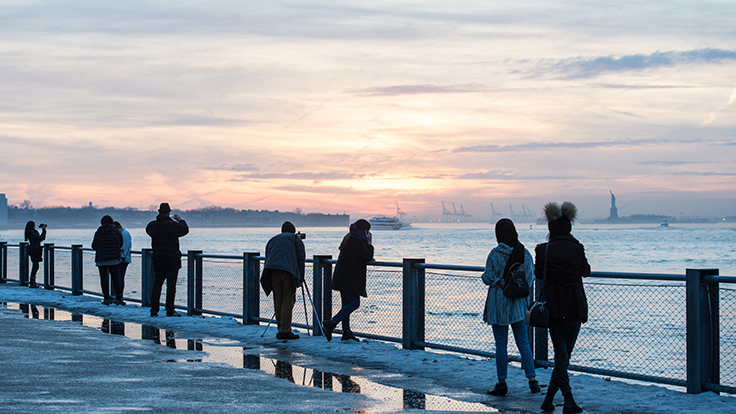