Travel is all about discovery — about getting out there and finding the most exciting experiences in an exciting new corner of the world. At the following hotels, you get a head start. Just a small sample of our hotels in New York City, they are the total hospitality package: one of the world’s great hotels and one of the world’s great restaurants, all in one place. Selected by Tablet Hotels, the hotel experts at the Michelin Guide. 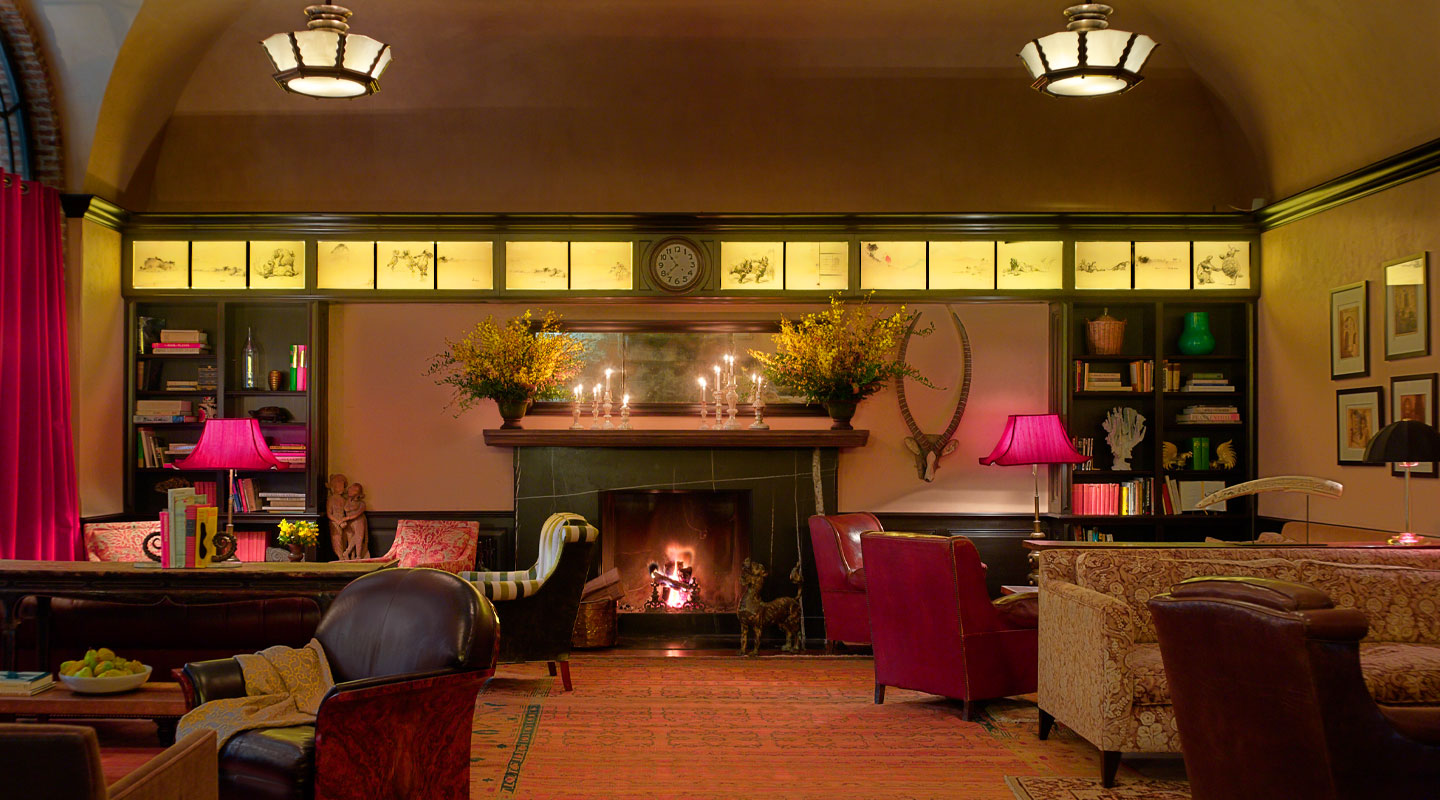 The Greenwich has a celebrity owner (Robert DeNiro), impeccable design credentials, and some truly obsessive construction, having something to do with thousands of very expensive handmade bricks. The prime Tribeca location places you roughly where hip and upscale intersect, minutes from more shopping and nightlife than any one neighborhood could reasonably need. As for the comforts, they’re far more than adequate. Even the humble courtyard rooms are luxurious, and smart-looking as well, eschewing minimalism for a detailed and lived-in look.
Read about the restaurant: Locanda Verde 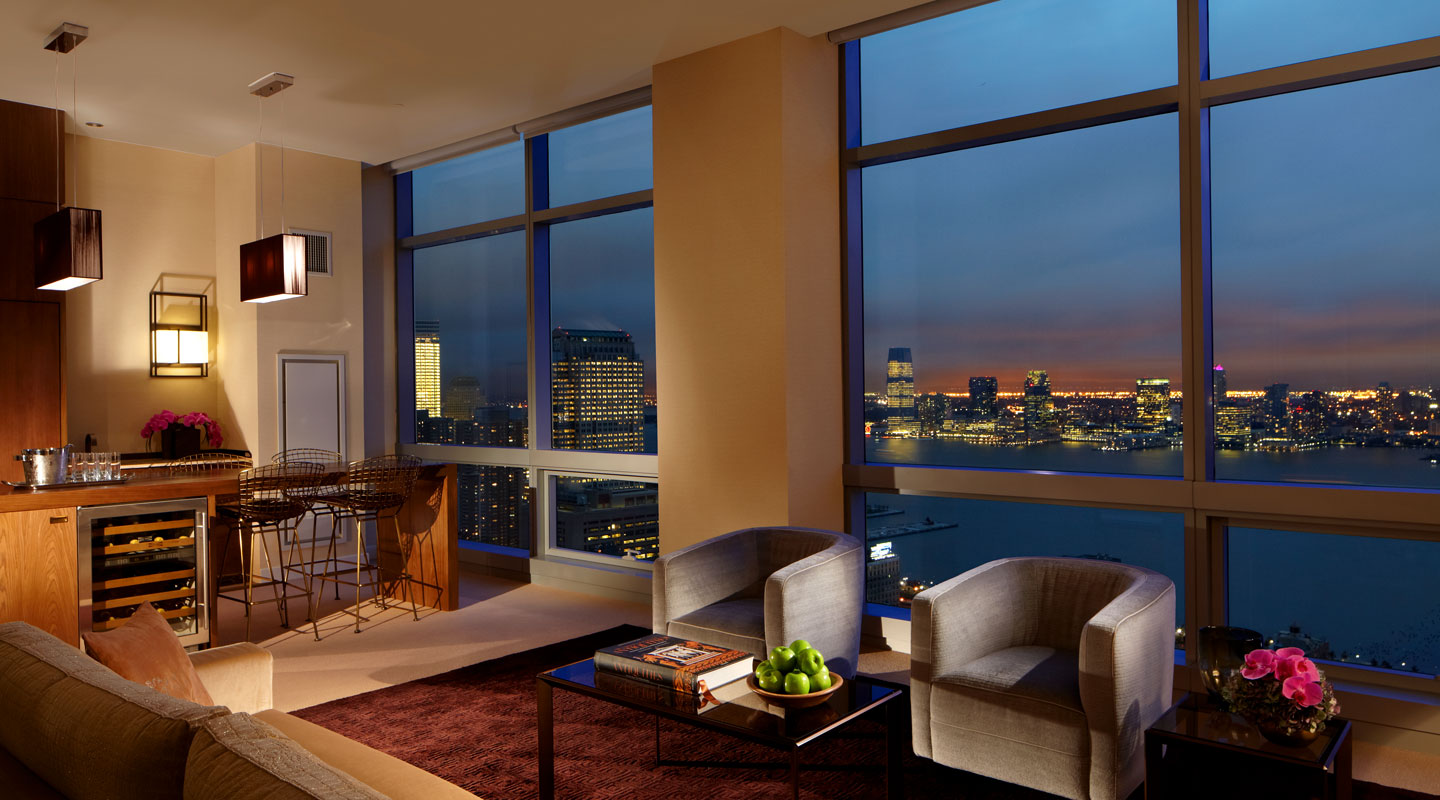 F. Scott Fitzgerald may have said that there are no second acts in American life, but we can all think of plenty of exceptions. The Dominick may have had a troubled past, thanks in no small part to the involvement of our nation’s most famously divisive real-estate developer, but the slate has been wiped clean — it’s got some new owners, it’s been given a new name, and now this Soho stunner is ready to be seen for what it is: a stylish, luxurious boutique hotel with a stellar Spring Street location and commanding views of downtown Manhattan and the Hudson River.
Read about the restaurant: Vestry 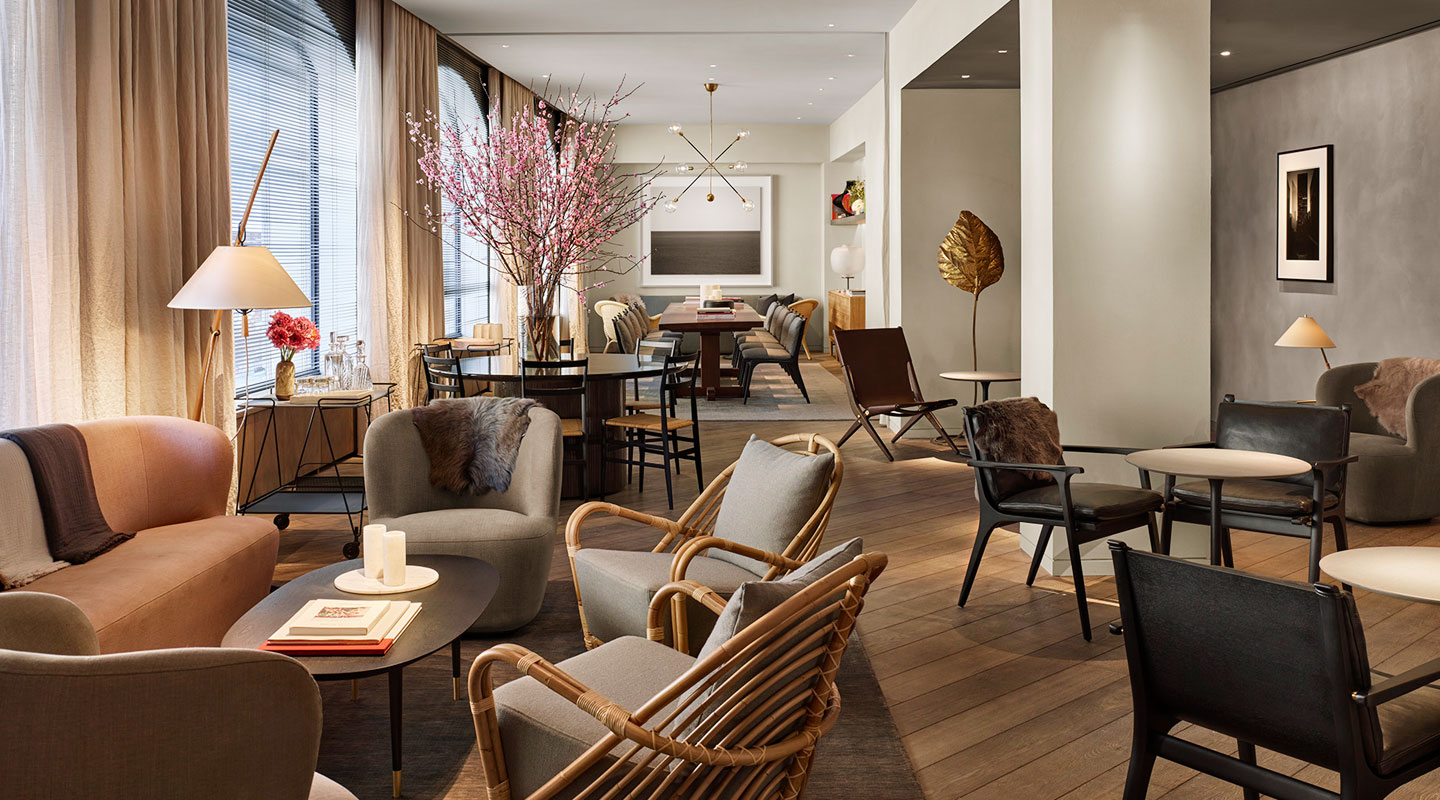 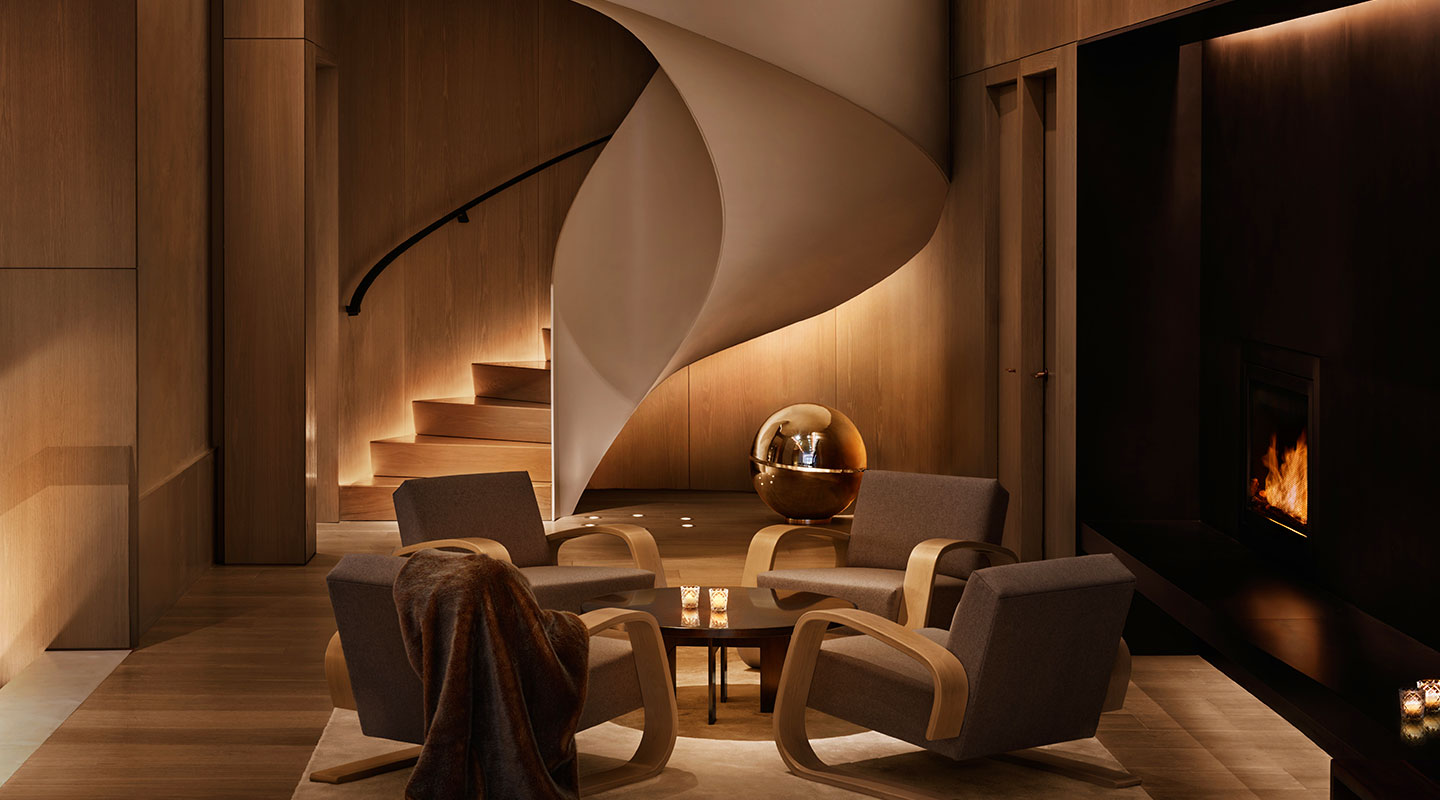 The latest addition to Ian Schrager’s Edition family is in the old Metropolitan Life Tower, otherwise known as That Great Big Clock Tower in the Flatiron District. If you know Schrager by his earlier work you’ll be surprised to see a relatively sober, subdued look on display. In fact it’s something of an Edition trademark, and it’s perfectly suited to the century-old backdrop. The public spaces radiate prewar prestige, and the rooms feel serious, substantial, with subtly modern furnishings providing the contrasting note to the classic lines and materials.
Read about the restaurant: The Clocktower 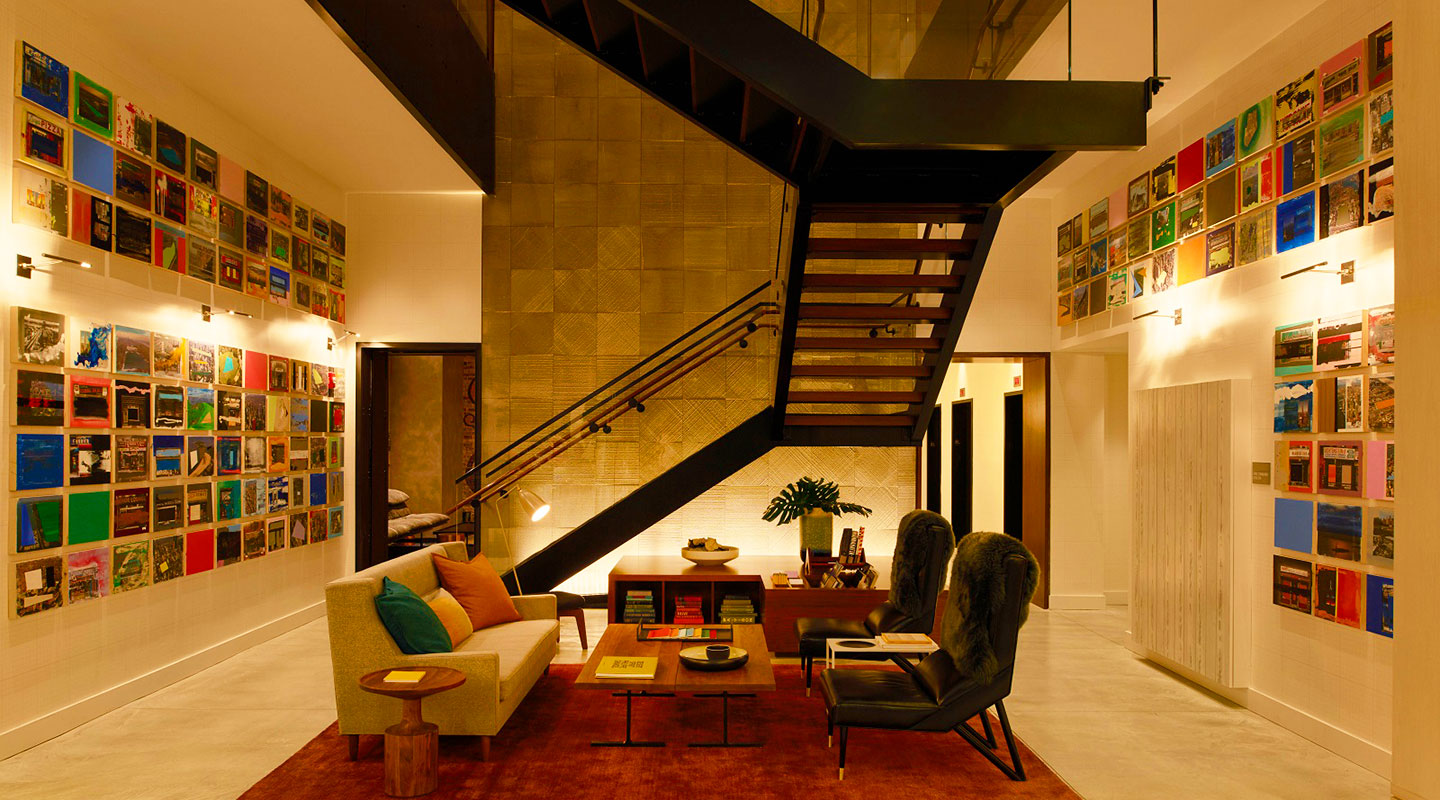 New York real estate prices being what they are, you can see why a spacious hotel room can easily run you a month’s rent back home. The flip side of this rule is that an affordable room is often laughably small. The Arlo NoMad, however, goes a long way toward solving the equation — through a combination of clever, compact layouts and the plentiful sunlight afforded by the full-length windows of a brand-new hotel building, its rooms manage to feel livable rather than laughable, in spite of their modest square footage.
Read about the restaurant: LamaLo 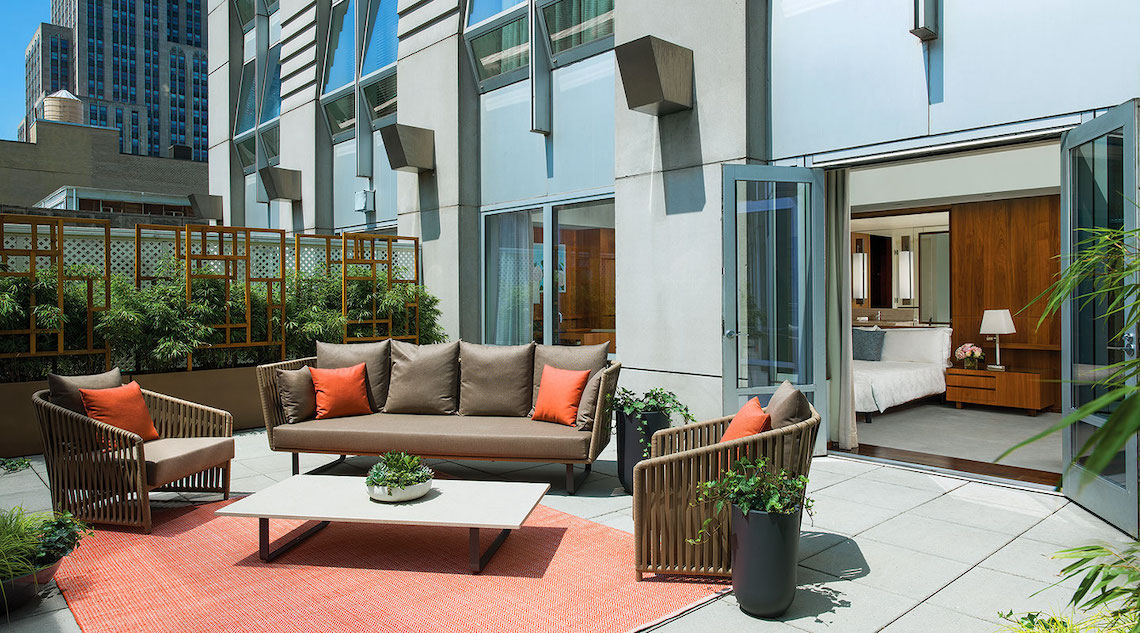 To call this one of Manhattan’s more storied neighborhoods would be an understatement—that’s the classic old Tiffany building just across the avenue—but Langham Place is more than up to the task. The rooms start out large enough, and are realistically apartment-sized once you get into the suites, with their kitchens and soaking tubs. The whole range is stylish, generously lit by full-length windows, and furnished in state-of-the-art Italian designer comfort. The bathrooms themselves come with more than a little spa-like decadence—though the actual spa covers the entire fourth floor.
Read about the restaurant: Ai Fiori 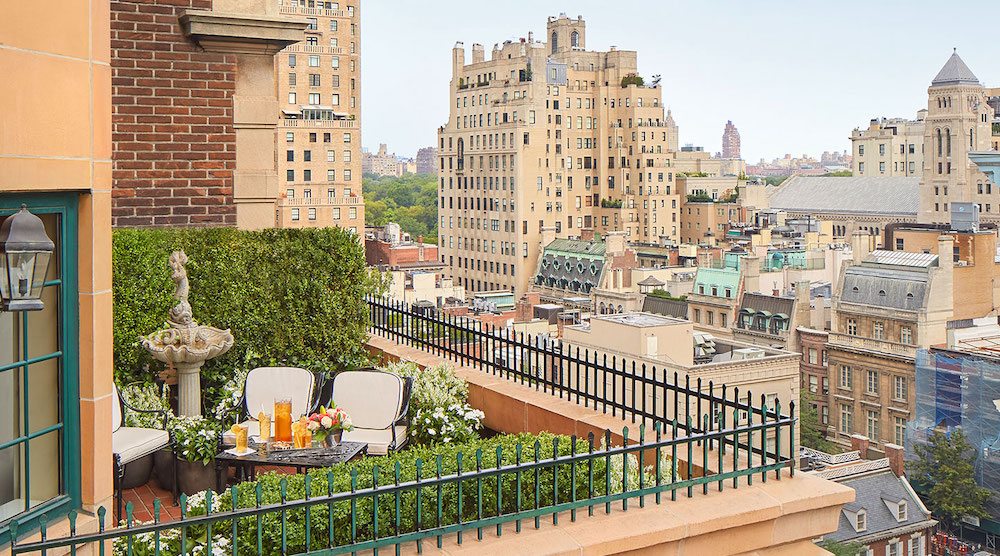 The Lowell (Upper East Side)

The Lowell saves the best for where it counts. Once you’ve stepped through the humble lobby — and off the equally humble elevator — and into your room or suite, you’ll grasp the point. These spaces are stylish updates on the classic prewar Upper East Side residential template, plush but always dignified, full of creature comforts and steeped in Gotham romance. Suites far outnumber rooms, contributing to the Lowell’s residential aspect, and more than a few of them have original wood-burning fireplaces, long gone from the vast majority of New York hotels.
Read about the restaurant: Majorelle 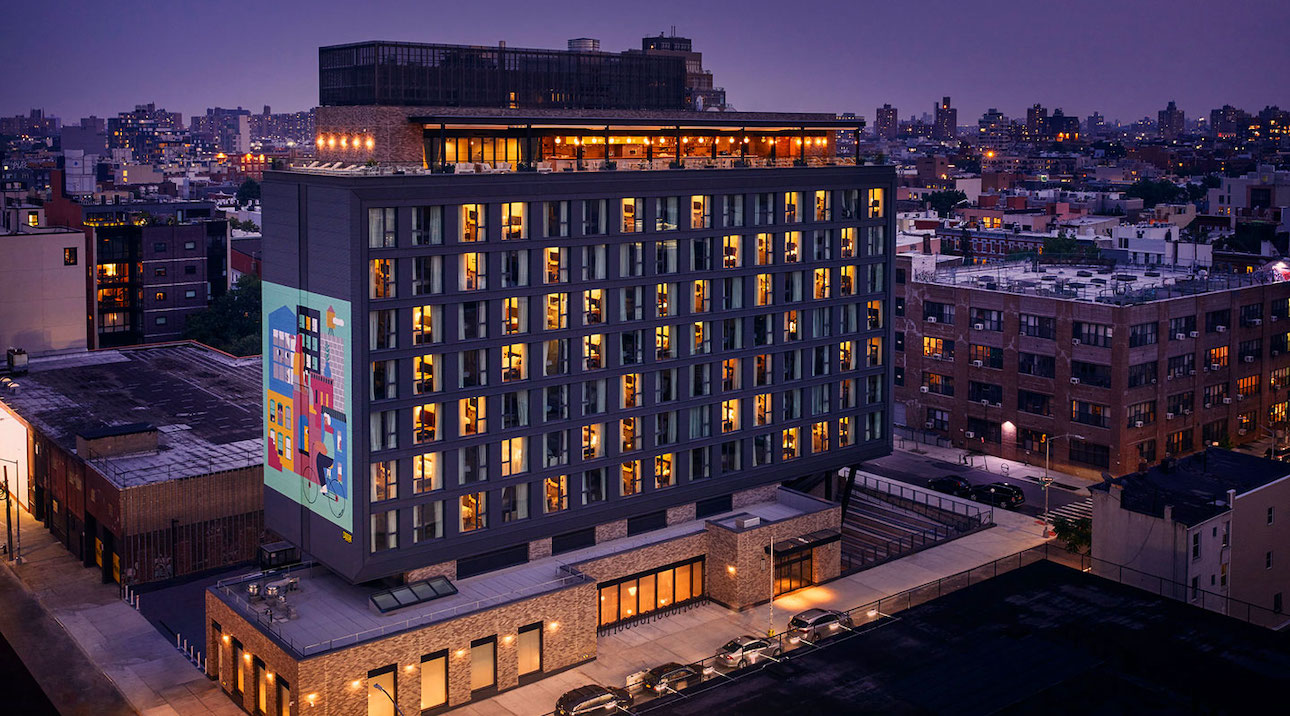 The Hoxton occupies a modern building, but it’s a loving tribute to the Williamsburg’s industrial heritage — an attribute it shares with the home of the original Hoxton Hotel, in London’s Shoreditch neighborhood. Thanks to the blank slate of a new building, rooms here are a touch larger than those in other Hoxtons — and thanks to the building’s low-lying surroundings, it offers far-ranging views over North Brooklyn and the Manhattan skyline. Floor-to-ceiling windows and king beds bring a touch of luxury, and each room has a selection of books chosen by a different local artist or creative.
Read about the restaurant: Klein’s 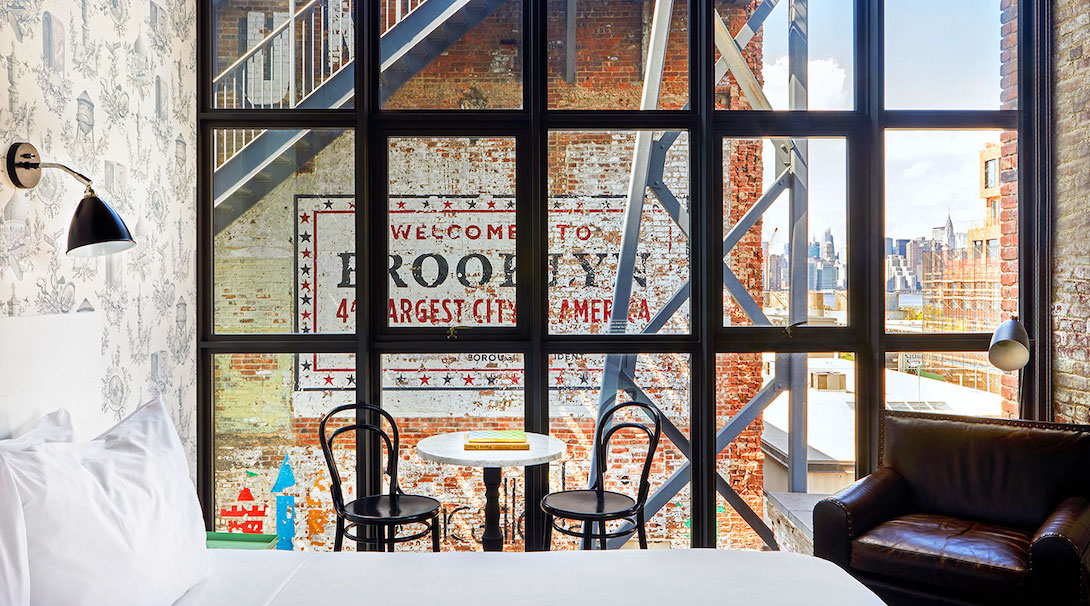 The Wythe is the hotel against which all future Brooklyn boutique hotels will be measured. Not because it won’t ever be topped, necessarily, but because it’s rare for a hotel to so completely exemplify the character of the neighborhood it calls home. Here in Williamsburg that means a location between McCarren Park and the gentrifying waterfront, in a 1901-vintage factory building that’s been lovingly (but not too thoroughly) renovated. Rooms are comfortable, spacious by New York standards, and perfectly suited to the setting and clientele.
Read about the restaurant: Le Crocodile