Elk is a small town in Mendocino County, about three hours north of San Francisco, perched along terroir-defining cliffs that embrace the Pacific Ocean. The craggy coastline is embedded with hidden coves and elbows of seemingly untouched sandy beaches. For Matt Kammerer, the Executive Chef of Elk’s One-MICHELIN-Starred Harbor House, this place is his muse. “I get to walk outside every day and be in nature,” he said. “For me as a chef and what I value, this is the best place I could be.”

In just a handful of years, Kammerer has seen the ecosystem in Elk change. The kelp beds in nearby tidepools have all but disappeared, in part, due to the rising temperature of the ocean. It is the visible effect of a warming climate, but for Kammerer, it’s also a direct link between his work as a chef and the environment — an especially relevant topic today, on the 50th anniversary of Earth Day.

Burning fossil fuels, like jet fuel from air travel, is the greatest driver of carbon emissions, which is linked to rising global temperatures. Higher temperatures translate to more extreme and unpredictable weather events, like drought. Since 2017, the end of California’s five-year drought, the state has experienced two of its most devastating wildfires, which are a damaging side-effect of sustained periods without rain. As Kammerer sees it, importing luxury ingredients and materials from around the world is a part of the problem.

In his formative years as a young cook, Kammerer traveled to Melbourne, Australia to train under Chef Dan Hunter at The Royal Mail Hotel and Chef Ben Shewry at Attica. Both restaurants relied heavily on extensive on-site gardens, and Kammerer saw first-hand the benefits of shortening the distance from soil to plate. Not just from an environmental point of view, but as a food professional. “Being able to pick your ingredients the morning before cooking them and serving them, there’s no going back after that,” he said. 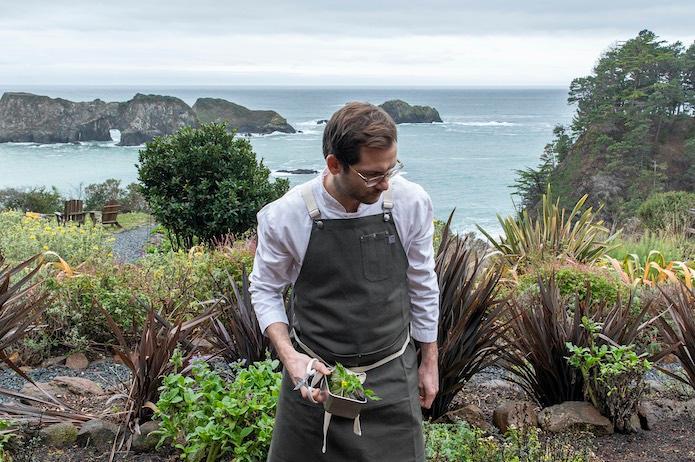 Sustainability took on more importance for Kammerer when he first arrived in Elk with the opportunity to run his own kitchen. It was 2016, a year before the restaurant and its 10-room inn opened (the century-old inn was at the end of an eight-year restoration). At the time, he was still the Executive Sous Chef at Saison in San Francisco, so he used his days off to get acquainted with the area. Witnessing the impact of human activity on the environment, and seeing those kelp beds disappear, ignited an obsession to understand and support his surroundings. He wanted to, literally, get into the weeds.

At the inn, Kammerer and his team strive to embed a sense of place into every aspect of the property’s food & beverage program — from breakfast to the evening multi-course tasting meal experience. (In light of recent events, the restaurant has reduced its operations to takeout, but Kammerer is optimistic the Inn will be back in business when the dust settles.) It’s why he chooses local flora and fauna, some from his own gardens, and animals raised by Mendocino County farmers instead of internationally-sourced ingredients that come with an expensive, albeit invisible, carbon price tag.

The effort to source locally isn't limited to the food. The tables at the restaurant are whittled from naturally-felled Redwood trees, and chopstick rests are fashioned from iridescent abalone shells plucked from icy cold waters nearby. Relying solely on local goods has pushed Kammerer and his team to get deeply familiar with their ingredients. A simple rain the night before can alter the flavor of an ingredient and how it’s cooked. The learning curve is steep, but the rewards are exhilarating. “Having a purpose that goes beyond the food is what makes me thrive and get excited about heading to work every day,” he said. 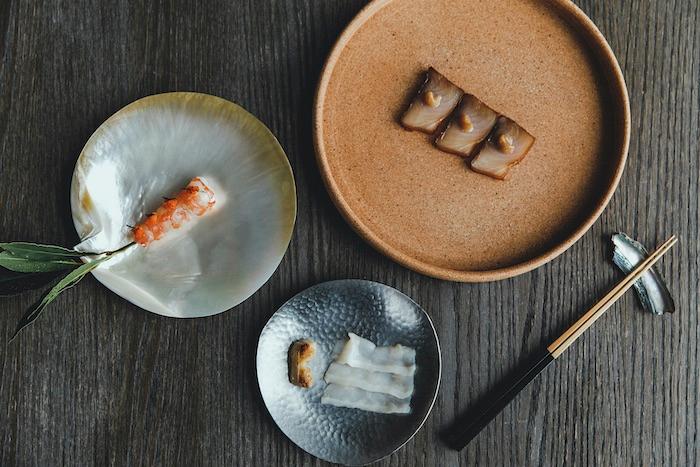 Local ingredients and materials sourced from Mendocino County give the dining experience a vivid sense of place. © Brendan McGuigan

While Covid-19 and social distancing may have unintentionally resulted in the reduction of pollutants in the air, the long-term impact is less hopeful. Companies that were leading the charge in environmental practices pre-pandemic will likely reprioritize their efforts towards rebuilding financial viability. And the likelihood of a recession threatens to halt the momentum cultivated by climate change activists while federal regulations around emissions standards simultaneously continue to loosen.

That is why Kammerer’s personal initiative feels even more urgent. “It’s about education and why it is the right thing to do. But the public has to understand that.” As trend-setters and influencers in their own right, Kammerer believes chefs have a platform to promote sustainable practices — if they choose to use it. At the restaurant, Kammerer challenges the status quo on a daily basis to find more opportunities to reduce waste and to rely less on energy-intensive methods. He is constantly asking if things can be better.

This type of thinking led Kammerer and his team to save water from ice baths, a precious resource in these parts, for the garden. They find a way to recycle nearly everything, even the wine corks. The stagiaires who come to work at Harbor House are often surprised by the dedication to operate sustainably. For Kammerer, the chance that a young cook will take these lessons to another kitchen is justification for the time and effort.

Being mindful about the impact our eating habits have on the environment is not just a buzzy restaurant trend. Kammerer encourages people at home to look at restaurants like his for inspiration and to invest in strategies to reduce waste, like finding a way to cook and eat vegetable trimmings you would normally throw away. A third of food bought and sold in America ends up in the garbage and methane gas from food waste decomposition accounts for 11% of total annual carbon emissions. It can make a difference.

Kammerer urges people to use their collective buying power when shopping for food like choosing vegetables at the market that are sold in loose bins and not packaged in single-use plastics — a devastation to marine ecology. At scale, consumer behavior is a force that can shape the way our supply chains work.

Admittedly, this requires education, time, and money. Having a surplus of any one of these things is a privilege. But if there is perceived value, Kammerer believes more of those with the resources will do it. Earlier this year, The MICHELIN Guide began rolling out a Sustainability Emblem, a symbol that distinguishes restaurants showing leadership in areas of sustainability. Gwendal Poullennec, The Guide’s International Director, describes the effort as the amplification of a critical issue. “The ideas, methods and know-how developed by these chefs will thus help raise awareness of an entire sector to its customers and the general population,” he stated in a press release.

For now, the restaurant industry is focused on survival. Coming out of the pandemic, Kammerer acknowledges that finances are going to be tight for those who manage to reopen. He hopes this will drive people to rely more on their local community of growers and farmers — a growing trend he is already seeing. Paying less for shipping means less fossil fuels and that might just be the best possible outcome. We’ll all benefit in the end. “White asparagus tastes good," he said. "But really, really good green asparagus taste great, and guess what, it came out of the ground yesterday.”