Catching Up With Coi’s Erik Anderson

He’s settling into the Bay Area quite nicely.

When it was announced that Coi’s executive chef, Matthew Kirkley, would leave the restaurant to train for the biennial 2019 Bocuse d’Or competition shortly thereafter, word spread even faster. (And it was often accompanied by a very quick record scratch and leaving much of the hospitality scene wondering, ‘now what’?) 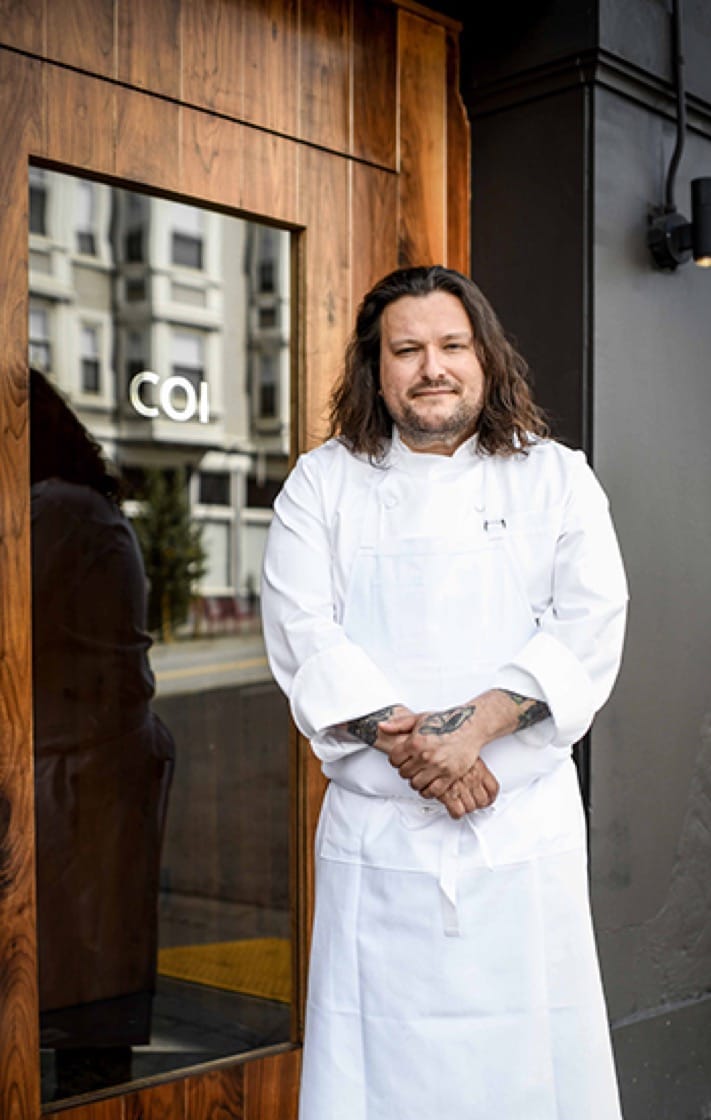 Enter Erik Anderson, chef and longtime friend of Kirkley, who took over the kitchen at the start of the year. A native Chicagoan, Anderson’s all-star resumé includes working the line at Noma, The French Laundry and The Catbird Seat in Nashville. He's a shoe-in for the job, but ask him what it was like filling said shoes and he’ll be brutally honest: “Terrifying.” (He’ll also rightfully admit that he’s really hard on himself.)

Over the past three months, Anderson has been finding his groove while overseeing the kitchen team. He’s beginning to feel more at ease with the menu direction and where they’re headed. “It’s good,” he says. “We’re still not totally there, but we’re inching there everyday.” The start of the spring season has provided a source of inspiration, bringing forth many green vegetables that are long-missed during the winter months. Anderson is now beginning to incorporate things like favas, peas and white asparagus into menu items.

“I never change everything all at once—it’s always an ongoing story,” he says of his 13-course tasting menu that runs at $250 per head. Anderson takes his time when seasonally rotating dishes, only changing one or two items a week. The sturgeon dish will soon be replaced with John Dory accompanied by fava beans and a sauce of dill, caviar, celtuce cut into brunoise and white onions, reminiscent of a dill pickle.

Artichokes, one of his personal favorites, will also soon be on the menu as well, and he’s making it one of his top priorities. “Last Saturday, I turned a few [artichokes] and I thought, ‘oh, I can still do this!’” (Anderson recalls a time at The French Laundry where he and another commis turned two cases of artichokes stem-off when they needed to be stem-on. “You don’t make that same mistake twice.”) 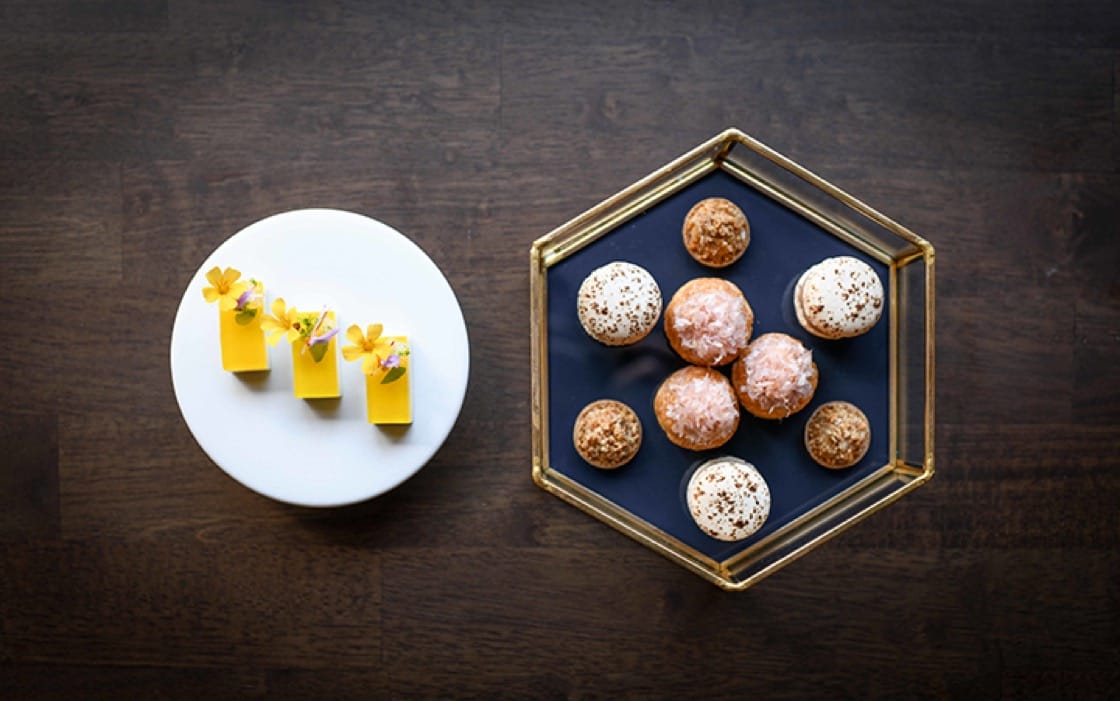 A variety of tarts and gougères often start the meal at Coi.

Next month, Patterson and Anderson are commemorating 12 years of business with two nights of collaborative dinners including some of Coi’s alums. Nine chefs will cook each day; Brett Cooper (Aster), Evan and Sarah Rich (Rich Table), Carlos Salgado (Taco María), Gavin Schmidt (The Morris) and Evelyn Wu (Boralia, Toronto) will all be on deck, each responsible for a course. (Tickets are available here.) Anderson is particularly excited simply because he will be meeting these chefs for the very first time. “It’s awesome—I’m meeting all these people I’ve heard about,” he says. “And cooking is all about forging friendships.”

Living in Nob Hill, Anderson feels he’s officially settling in—settling, not settled, “it’s a long process”—and nothing gives him greater joy than walking to work every morning, meandering through various neighborhoods and often stopping at the farmers’ market. On most days, he stops at Good Mong Pok, a dim sum bakery in Chinatown, grabbing an order of shu mai that he’ll finish before he reaches Coi’s front door. 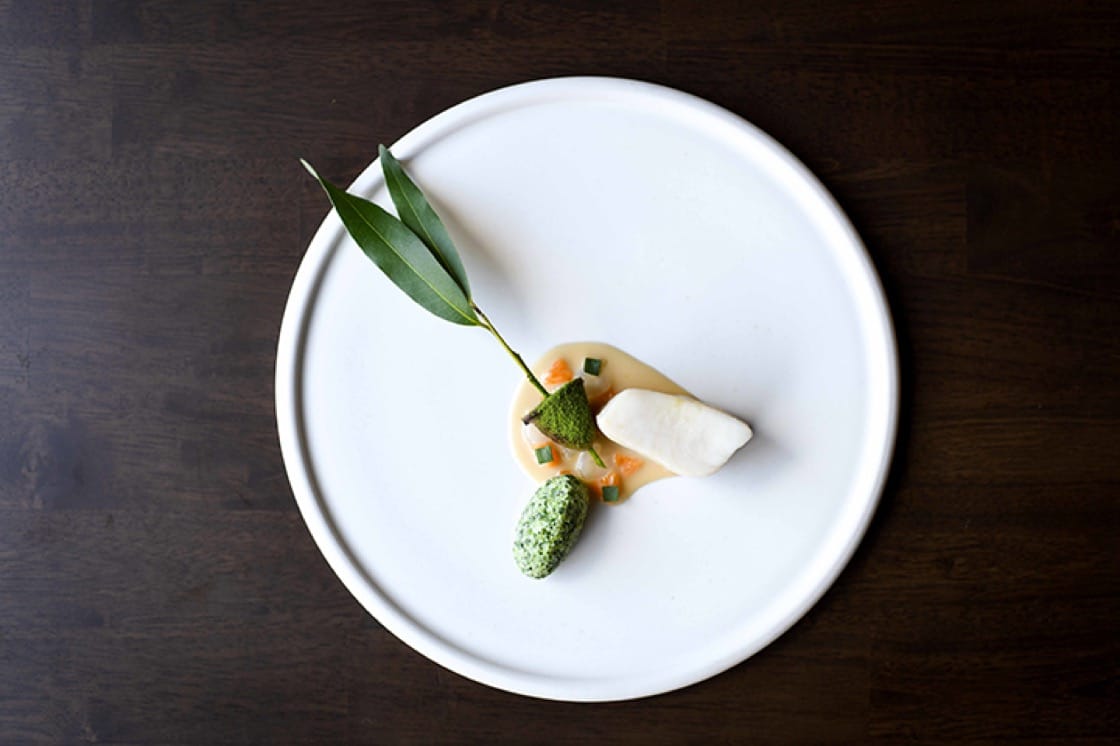 The sturgeon dish with roasted chicken, bay leaf and tarragon (pictured) will soon be replaced.

He’s also making the dining rounds, including visits to Corey Lee’s casual Monsieur Benjamin (“I love that place”), the iconic Zuni Café (for brunch, naturally), State Bird Provisions and SingleThread (he and Kyle Connaughton go way back to cooking in Chicago for Jeremiah Tower). “It’s a beautiful property—they’re living the dream,” he says of the Connaughtons. “I like to see good things happen to good people.”

Anderson and Kirkley still see and talk to each other fairly regularly. “I’m actually his assistant coach,” Anderson says of the Bocuse d’Or team. Last weekend, he was in Mexico cheering on Kirkley and commis Mimi Chen (Daniel) at the Americas Selection competition. “They’re doing some really cool stuff—it makes you inspired.”

All photos by Bonjwing Lee.

holiday Ireland Gastropub
All articles of Dining Out