Located along Highway 12 in Wine Country lies a quaint building that serves some of the best Mexican food in the area. "Lovers of regional Mexican food will swoon for this laid-back charmer, which offers full-throttle fare made with quality ingredients," inspectors state of El Molino Central in Boyes Hot Springs in Sonoma County. Open daily from 9:00 a.m. to 9:00 p.m., large numbers of guests place their orders at a counter before passing through the kitchen to the seating area (or getting their food to go) to enjoy an array of flavorful dishes.

Per inspectors: "Entrées shift with the seasons, but the preparations are always expert: try the halibut ceviche with house-made chips or the red mole tamales chockablock with chicken and just a touch of masa. The Bohemia beer-battered fish tacos featuring handmade tortillas are a must, as are the addictive poblano-tomatillo nachos verdes. Of course, spice fans can't get enough of the crispy chilaquiles."

Karen Taylor Waikiki is the woman behind the whole operation. She opened El Molino Central in June 2010 after having run a Mexican prepared foods company and stand at the Ferry Plaza Farmers Market, Primavera, since 1991. The star of Primavera's and El Molino Central's tamales, quesadillas and tacos is the fresh masa used to make them, which is the inspiration behind the restaurant's name. A "molino" refers to the mill in Mexican towns where the community turns nixtamalized corn, or corn soaked in limewater, or other alkaline solution, into masa. So while other restaurants might tout fresh tortillas on their menus, many use powdered, instant masa instead of the fresh stuff produced at El Molino Central on the regular. 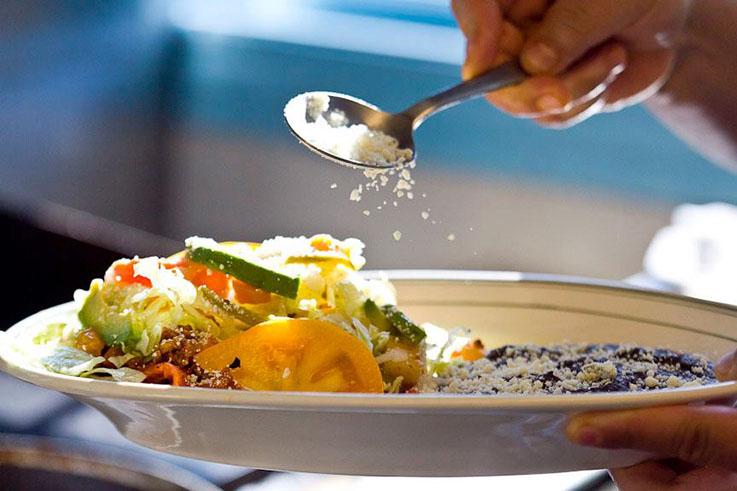 Taylor Waikiki is not Mexican, but instead a disciple of Diana Kennedy, one of the foremost authorities on Mexican cooking, and has traveled all over the country to learn about its food. Though Taylor Waikiki is the owner of the restaurant, she credits her staff of Latino immigrants for most of El Molino Central's continued success. She will often partner with her employees, who came from various regions throughout Mexico, to collaborate on new dishes for the menu to combine their expertise with her own. Dish descriptions, such as Quintana's mole or Rufina's pork tamales on a recent menu, even credit the collaborator.

To drink along with the results of these amalgamations, there's a selection of non-alcoholic beverages, beer, and—it being Sonoma after all—wine to enjoy with your food. And if you truly can't get enough of El Molino Central's "full-throttle flare," there's a selection of tamales, salsas and other packaged items for sale to stock up your fridge.