Chicago’s notoriously brutal winter makes the summer months a more anticipated opportunity to eat and drink outside than in most other cities. Both restaurateurs and eaters alike miss no chance to enhance the experience with everything extra: dart boards, cornhole, music and extra late hours.

Below are some of Chicago’s best places to drink al fresco while the enjoying the ephemeral, contagious spirit of summer in Chicago. 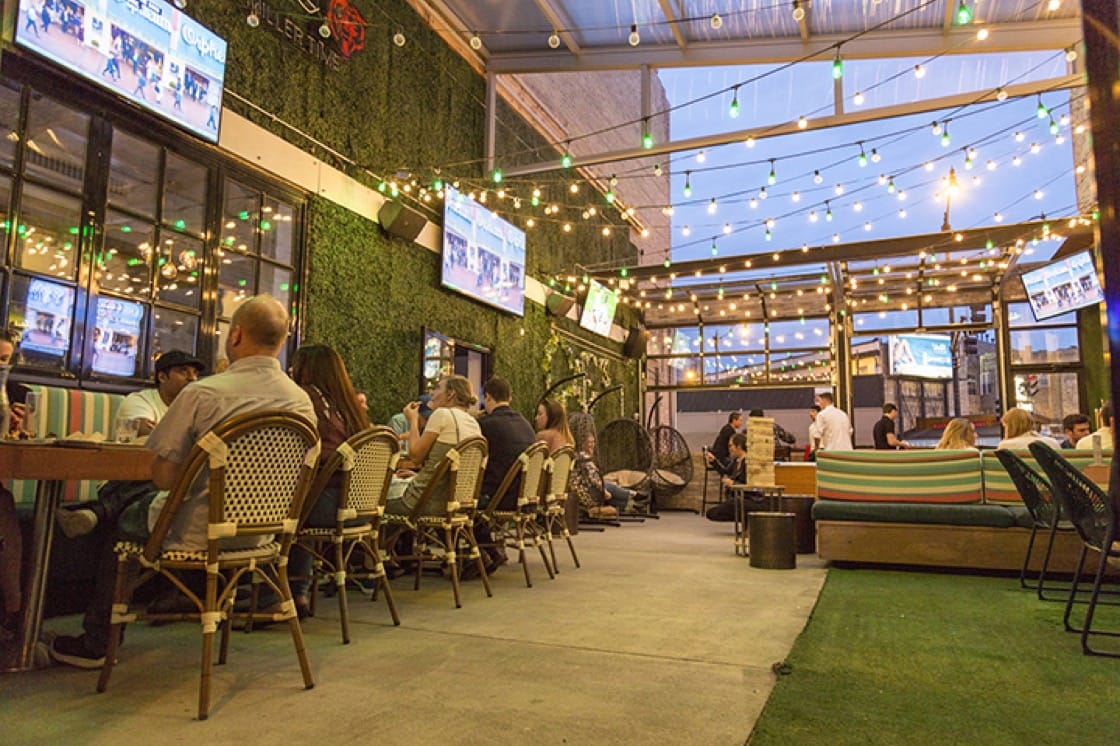 Grab a beer and a Chicago dog-meets-burger on poppy seed bun at Old Grounds Social. (Photo by Shivani Kumar.)

Play pool, watch the game and eat fried Oreos on the patio of this new Lincoln Park bar where chef Jason Paskewitz (of the recently-shuttered French bistro The Blanchard) offers crowd-favorites like Chicago hot dog burgers on poppy buns, blackened shrimp po’ boys and fried chicken nachos alongside slushy machines served in 24-ounce styrofoam cups. Old Grounds Social opened in March from the team behind River North’s Hubbard Inn, offering Chicago residents and visitors a chance to watch (and play) games outdoors year-round. The drinks menu features $10 cocktails like “Violent Times” (vodka, violet liqueur, raspberries, lemon and thyme) and six frozen cocktails that come in flavors like “Dirty Shirley,” “Frozé all Day” and “The OG” (Cruzan strawberry rum, orange Red Bull and peach purée). If it starts raining, darts or shuffleboard are waiting for you inside.

Bring your dog and favorite drinking buddies to this 20-seat patio bar offering one of the largest collections of tequilas and mezcals in the city. Lady Gregory, which opened mid-March, brings guests Mexican comfort food with tacos, ceviches and hand-stretched flatbreads from a wood oven, alongside shareable sides like buttered plantains and yuca fries with Tajin seasoning and mojo mayonesa. Order the fish of the day fresh off the grill and choose from draft cocktails like “La Diabla” (Banhez mezcal, crème de cassis and ginger syrup) or the “Paloma Sucia” (Libelula tequila, grapefruit liqueur, Select Aperitivo and passionfruit syrup). 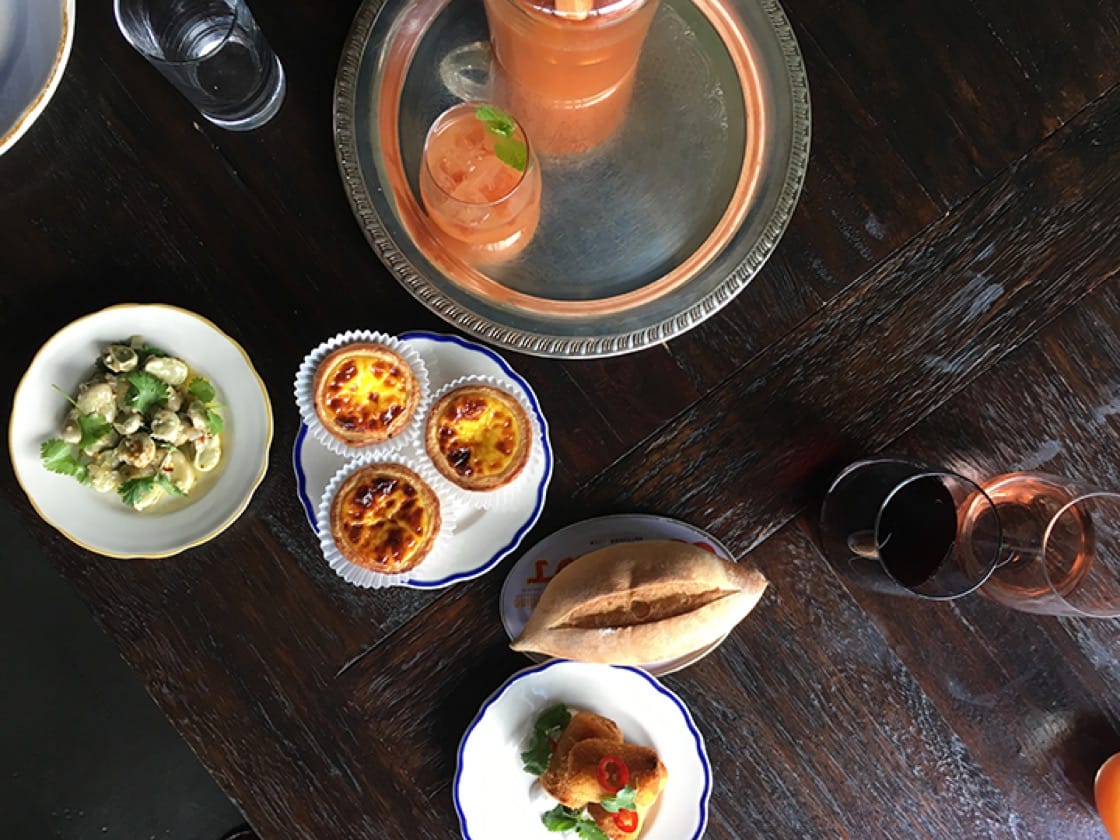 The new luxury rooftop bar on top of The Peninsula opened last month revealing stellar views of Michigan Avenue and a new haven for the highly indulgent. The drinks list from Vlad Novikov feature bottled Cosmopolitans (which come five at a time in a Champagne bucket), small-patch bitters from places like Bitter Queens in San Francisco (Z Bar is the only destination in the United States to currently feature them) and conversation-starter cocktails like the indulgent “Manhattan Royale,” featuring Elijah Craig 18-year-old bourbon or WhistlePig 15-year-old rye—at the guest’s choice—which is garnished tableside with truffle or saffron bitters, before served in handmade crystal over ice that’s laced with 24-karat gold. Snacks from executive chef Toni Robertson are also designed to dazzle—the bar’s “ants-on-a-log” is made with crème fraîche and caviar, and the “marrow poppers” are tater tots filled with bone marrow and Bordelaise. 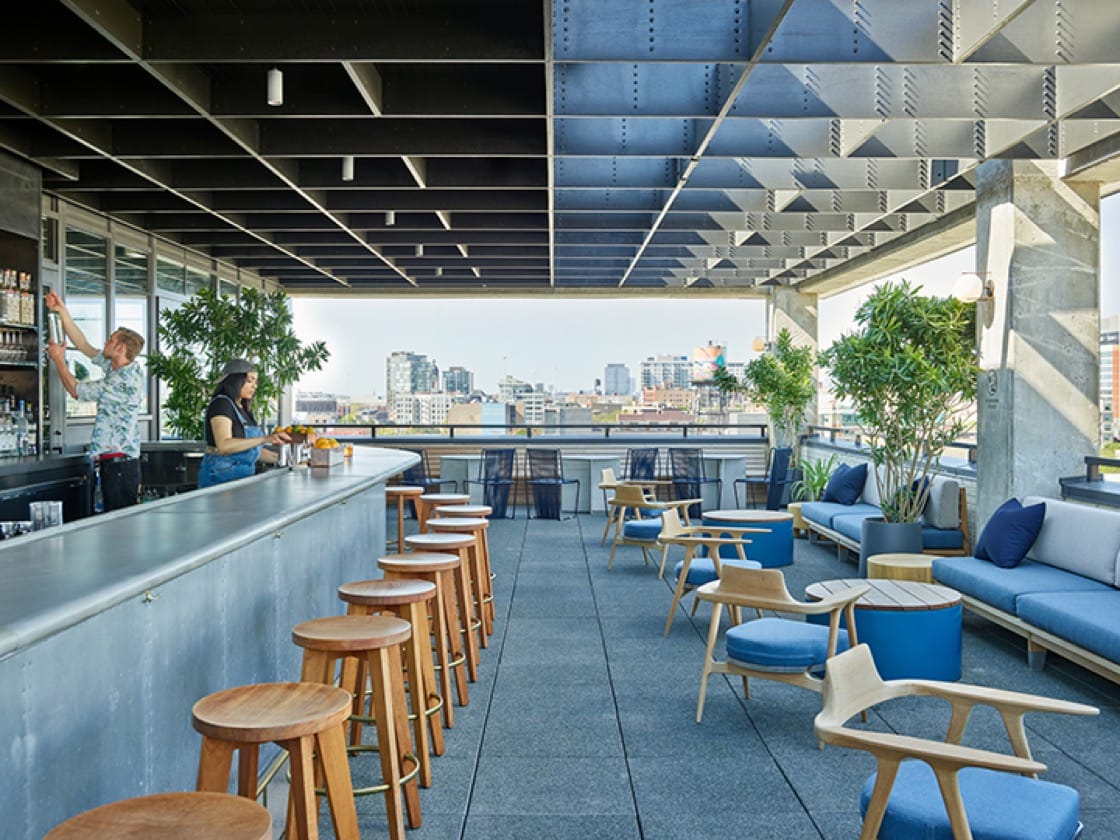 Head to the rooftop of the Ace Hotel for some live music at Waydown. (Photo by Spencer Lowell.)

Take off your shoes and stay awhile at the back porch at Big Chicks. The come-all hangout near Chicago’s Hollywood Beach opened in 1986 as a spot for World War II vets and quickly became a locust of conversation and revelry for Chicago’s queer community and beyond. Since its opening, owner Michelle Fire has fostered an undeviating spirit of inclusivity and openness, featuring community art on the walls, offering dollar burgers every Monday (along with slices of housemade cakes) and a weekly Sunday barbecue to thank her loyal patrons. The menu features comfort foods like mozzarella sticks and chili cheese fries, and drinks are in the realm of $3 vodka lemonades (which Michelle and her crew offer every Sunday).

Outfitted with a front yard patio complete with picnic tables, The Moonlighter is the younger sibling of the Logan Square mainstay Scofflaw, and here, everything is kept casual. Descriptions like “low ABV, refreshing, bitter” and “herbal, fruity, effervescent” precede each of the bar’s $10 cocktails, $40 pitcher concoctions and short list of wines, helping out anyone who feels like they’re blind-guessing whenever they order a drink. Cocktail highlights include the “Ode to Mexico,” a blend of beer, spices, tomato and citrus with a seasoned rim and a side of mezcal, and the “Sundowner,” made with Jamaican rum, lime, ginger, allspice and Angostura bitters. The kitchen stays open till 1:00 a.m. all week (and 2:00 a.m. on Saturday), meaning you can order mac and cheese, buffalo wings or one of the kitchen’s six specialty burgers well into your third (or fourth—we’re not judging) round of drinks. 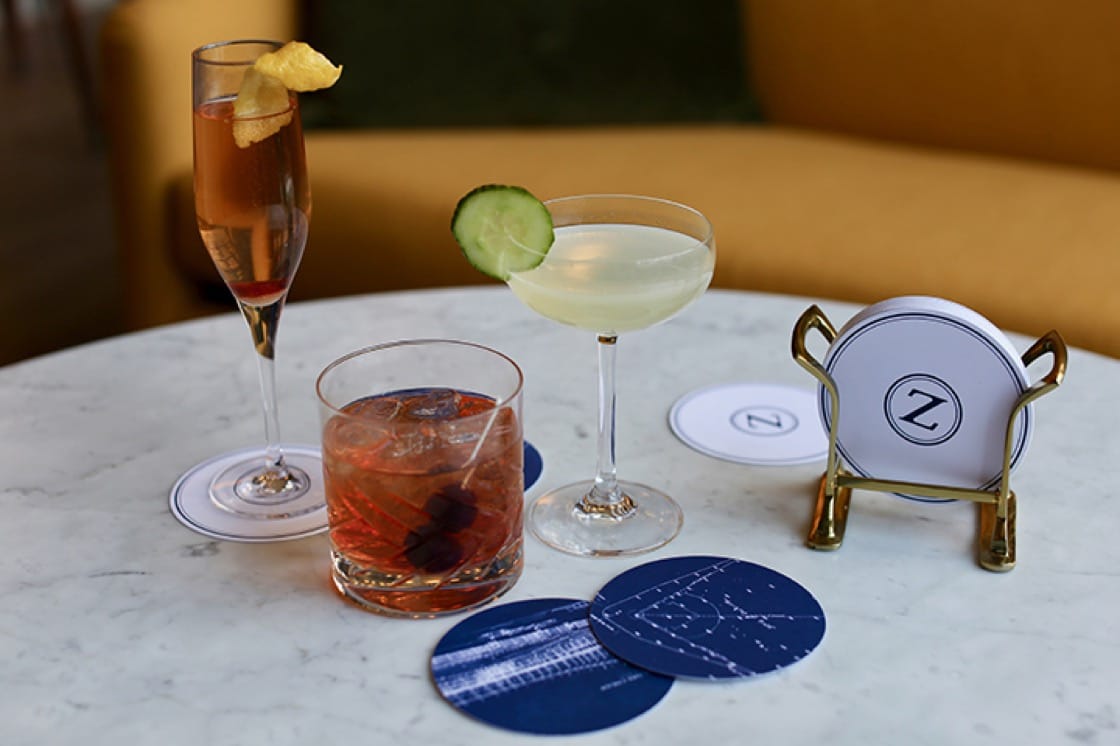 Heading to Wrigley? Check out The Bar at Hotel Zachary located conveniently across the street. (Photo courtesy of Hotel Zachary.)

The Bar at Hotel Zachary

The new second floor bar across from Wrigley Field opened in March much to the delight of regular game-goers, who can now snack on lobster corn dogs and jerk-rubbed, roasted jalapeño chicken wings from chef Radames Lugo before and after games. Along with sweeping views, the bar also offers craft cocktails like “All Sequins Everything” (strawberry jam, mint, Aperol, lemon, sparkling wine and soda) and the “Lake Effect” (North Shore Aquavit, soda, St. Germain, grapefruit, lime and Maldon salt). For beer lovers, there’s also a beer bucket for a game of Edward Fortyhands. The outdoor patio seats 45, so you can bring a group, but get there early as others might have the same idea. For those looking to bar or bite hop, the hotel hosts a number of other notable establishments, including the city’s second Big Star, Dutch and Doc’s (which opened in May from the Boka Restaurant Group) and Mordecai (from chef Matthias Merges of recently-shuttered A10).

Perched atop the Lincoln Hotel are couches and wicker chairs offering some of the best views in Chicago, including the Gold Coast, Lincoln Park Zoo and Lake Michigan. Brought to you by Boka Restaurant Group, The J. Parker features a menu of unfussy classics like truffle fries, grilled cheese on sourdough and the J. Parker burger served with bacon onion jam, blue cheese aioli and arugula. The cocktail menu aims to simulate destination escapes, with bucket-list drinks like “Okinawa” (Glenmorangie scotch, ginger and apricot liqueurs and lemon), “Maya Bay” (Chicago Distilling ceres vodka, coconut rum, lychee, Thai basil and lime) and “Lake Geneva” (Knob Creek rye, grapefruit, strawberry, lemon and summer shandy). To cap off your day of outdoor drinking, get an order of warm cookies from the bar.