Behind The Bib street food Taiwan

Stepping into Wan Nian Building in Ximending, we found Lao Shandong Homemade Noodles and what stood out immediately – other than the irresistible fragrance of the steaming broth in the boiling pot – were the calligraphic artworks on the wall.

Ornate scripts emphasising respect to one’s trade and the virtue of eating are displayed with Mencius’ proposition on how one must go through arduous challenges of hunger and labour before they can take on significant responsibilities. They are all written by restaurant founder Yu Hsin, who had apparently thought extensively about the future of his venture in the hands of his heirs.

“There’s a saying in our family: ‘the virtue of eating is the greatest; always respect your vocation’. It tells us to do things step by step, come to work every day with a humble attitude,” says Yu Huai-Tseng, third generation owner and chef of Lao Shandong. His grandfather's teaching are etched in his mind: Ingredients of unverifiable origin are prohibited; every task has to be done in the most traditional way; always hold conscience and morality close to the heart; never lose the momentum of work.

Watch the video "A Family Adage"

Lao Shan Dong is just as fabled in the Old Taipei’s collective memory as the Wan Nian Building where it is situated. Having celebrated its 70th anniversary, the business has been passed down from one generation after another. Yu Hsin arrived in Taiwan in 1949 and started his new life selling mantou. To feed his family, he would use the leftover flour to make noodles and cook them with some vegetables. Incidentally, this by-product from his mantou business found attracted the attention of the rickshaw-pulling labourers nearby. Many of them asked Yu to prepare a noodles for them to try. Inspired by that, he began making his own beef bone broth and selling noodles with a pushing cart. He called the venture Lao Shan Dong as a reference to his strong northern accent. 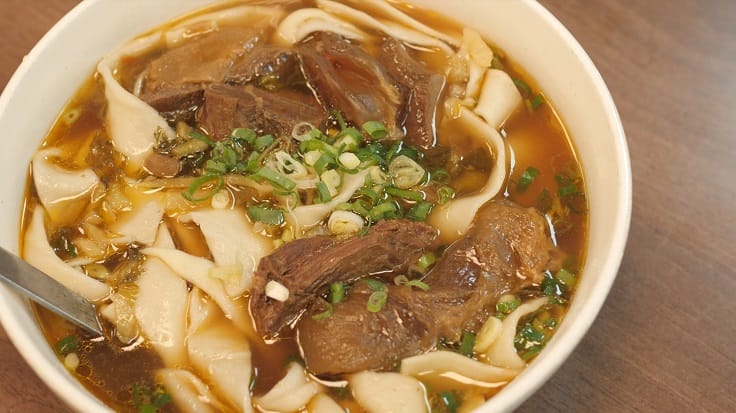 Yu Huai-Tseng admits that there is no secret to his beef noodles other than following the original recipe and preparing everything from scratch by hand. The entire process kicks off with rolling the dough, to which only salt and water are added. Gradually, the flour dough is rolled to the desired thickness and cut into long noodles 2cm wide. Having noodles of a certain width prevents them from sticking together, helps them soak up the broth and gives them a nice chew.

The broth is simmered every day with beef bone, spring onion, ginger and garlic over a long time No artificial flavouring is added. Other food items are also freshly prepared every day in the morning. The fresh and plump dumplings, a favourite of many regulars, are parcels of garlic chives and ground meat sealed up in thick dumpling skin.

The job sounds deceptively simple on paper, but in reality, it requires a ton of determination to follow through.  “Those [beef] bones are way larger than human bones, and we need to scoop them up; look how much energy it takes to roll and press the noodle dough. As the day goes by, our legs could shake and hurt with all the standing. When it gets busy, you don’t even have the time to eat, not to mention how greasy you become. That makes Mencius’ words so appropriate to what we do: ‘starve one’s body and skin, drain out everything from one’s body’,” Yu explains.

A regular day in his kitchen starts at 7am with the broth and side dishes, and it doesn’t end until 10pm or later. It is a sheer test of stamina and mental fortitude. 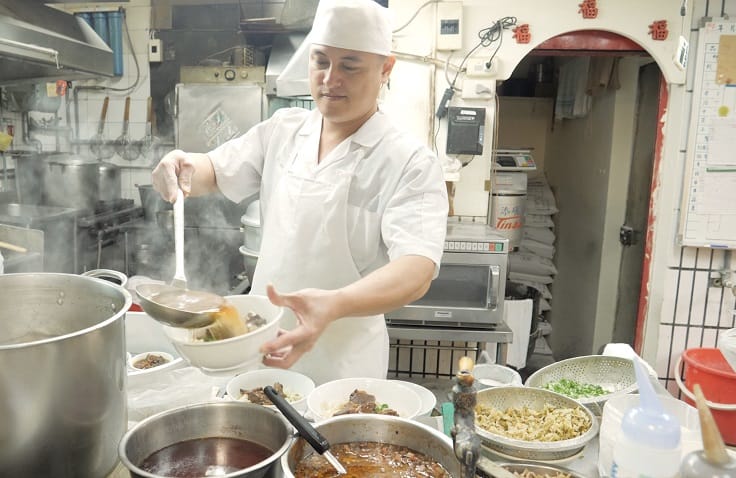 Yu has been helping out with the family business ever since he was in primary school. As a kid, he was already very interested in cooking. He would even make his three brothers fried rice when they were left at home alone – albeit he mistakenly seasoned the rice with dish soap once. “I couldn’t tell dish soap apart from oil at that time (the two products are sold in Taiwan under very similar brand names), yet we had a good time eating it,” he laughs jovially.

Having spent some time at home, he ventured out to cook in western, Chinese and Japanese restaurants at different times. When he decided to take over Lao Shan Dong, he first took five years to work at Din Tai Fung to learn modern restaurant management strategy.

Yu added that the shop ran into some forks in the road which could have taken them off the original path. They were approached to launch a line of instant noodles, and in another occasion, to set up a restaurant chain and central kitchen. Ultimately, they realised it was more complicated than running an independent venue in terms of time and experience, be it managing manpower and ingredients or quality control of the food. So, they chose to stay on course and concentrate on their only location in Taiwan.

Yu still remembers his grandfather scolding them in his very thick Shandong accent when they were young. “Do it properly. If you’re really up to the job, go through the hardship and rely on yourself,” he recounts. At that time, he felt very unlucky whenever he was exhausted at work. All his classmates were outside having fun, yet he was slaving away at the shop. But so many years later, it finally becomes clear to him that there is a meaning behind every small thing that he has done. 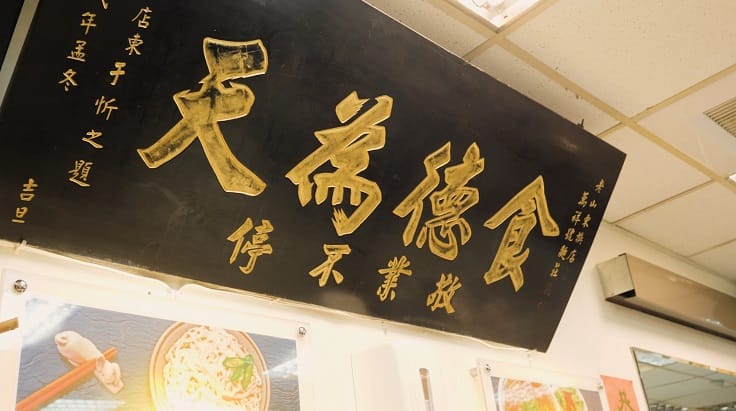 “The virtue of eating is the greatest; always respect your vocation”, the most important principle of the Yu family.

On the day that Lao Shandong was announced to be on the inaugural list of Bib Gourmand restaurants in the Michelin Guide Taipei, the restaurant was saturated with media and curious diners. The food was sold out by 7pm. The influx of people showed no sign of stopping over the next few days. Not willing to compromise the quality of their product, Yu’s team went to work early and got off late, making as much preparation as possible to serve the customers. He recounts how the noodle cook’s hands were completely burned out, because each bowl of noodles had to be prepared individually, and the cook had already been repeating the same routine several hundred times in one day.

Given how seemingly simple the food is at Lao Shandong, is Yu afraid of copycats? “It’s not a problem. A lot of people want to learn and have their own business, but doing business and learning to cook are just entry-level stuff. Your spirit and attitude behind are the most important elements,” he replies with confidence.

night markets Taipei Behind The Bib
Dining Out 2 minutes

A meal in Taiwan is rarely complete without a humble bowl of braised pork rice.