Between glitzy condos and buzzing beauty clinics, Thonglor is teeming with destination-worthy dishes. Here’s how to navigate the neighbourhood, one bite at a time.

Home to the well-heeled and hip, Thonglor is Bangkok’s epicentre of all things trendy. The 2.5km stretch between Sukhumvit and Petchburi Road has more clubs and bars than any other area in the city. Creative restaurants and shops have cropped up steadily over the years making this area, once nothing more than a hub for wedding dress shops and car dealerships, one of the most interesting dining sections of the city.

A stroll along this popular neighbourhood’s lively street reveals hip cafés, boutique shops, bustling bars, salons, and, most importantly, more restaurants than you can wrap your head around. It’s hard to know where to begin eating, so let us lead you to our favourite culinary gems.

Bo.Lan (One Michelin Star)
In a quiet spot on soi 53, Dylan Jones and Bo Songvisava are creating magic in the intimate space of Bo.Lan. Arguably one of the more famous of the growing crop of nouveau-Thai restaurants, the hyper sustainably-minded chefs deserve all the praise. The tasting menus here are made up of Thai dishes derived from traditional recipes and ingredients that have been thoughtfully created with farmers, producers, fishermen, and communities in mind - it’s fine dining but with serious soul.

See what our inspectors said about Bo.Lan here. 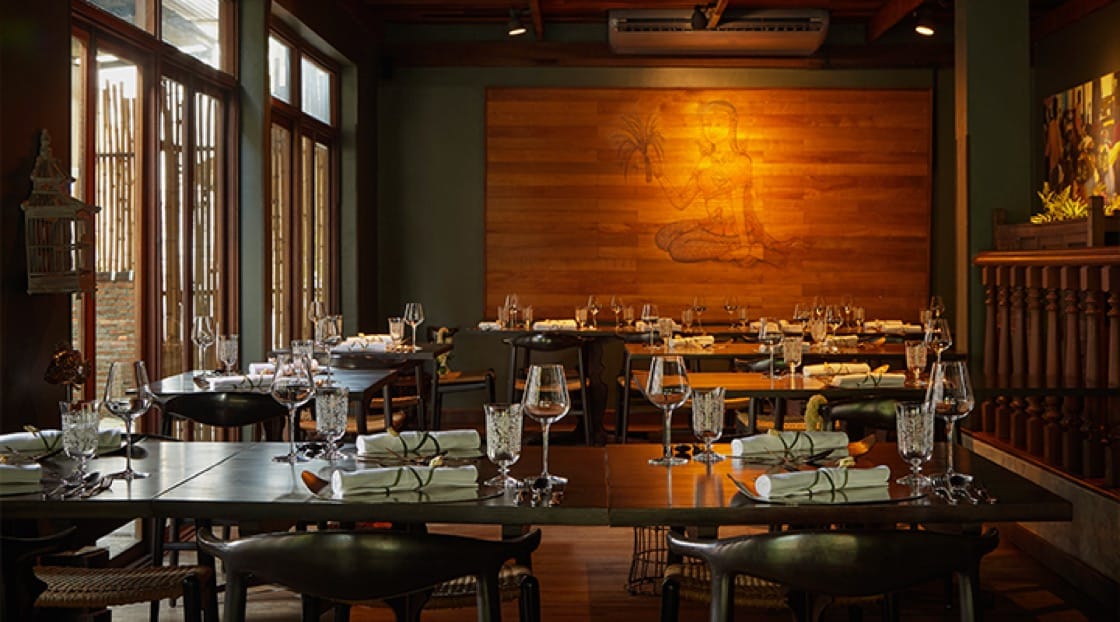 Canvas (One Michelin Star)
With its stately double arched façade, Canvas stands out in elegance amongst its neighbouring humble shophouses. The impeccably plated dishes thought up by chef Riley Sanders quickly earned the restaurant a star, and for good reason. The seasonal six- and nine-course tasting menus here feature local, organic or wild ingredients that have been meticulously sourced from farmers and suppliers all around the country. Think dishes like king mackerel with ant egg, cucumber, soy, and dill, or Thai Wagyu with Thai truffle and Chinese kale. If you can, grab a seat at the chef’s table-style counter to get a close-up of Riley at work.

See what our inspectors said about Canvas here. 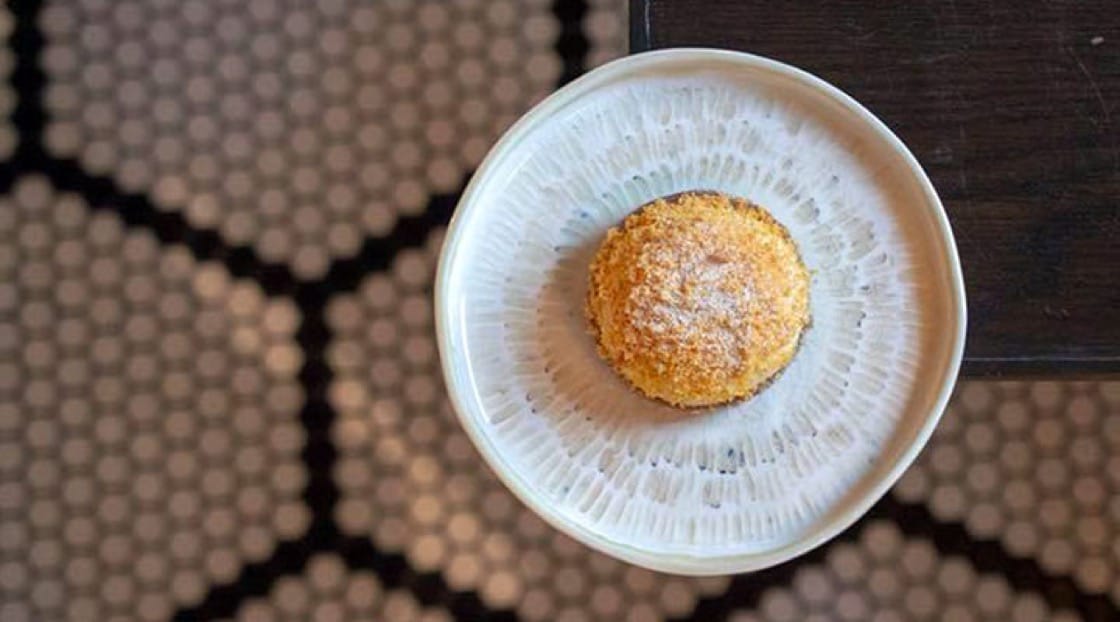 R.Haan (One Michelin Star)
Inspired by an old Thai saying: "Nai Nam Mi Pla Nai Na Mi Khao" (In the river, there are fish; In the rice field, there is rice), R.Haan aims to preserve Thai culture through the art of cooking. Set in a prominent house on Thonglor soi 9, the elegant dining room feels more like a meal at your deep-pocketed grandmother's house. Each of the three set menus consists of 14 dishes that use local produce. Choose the Amazing Thai Taste Samrub menu for Chef Chumpol Jangprai’s take on familiar dishes like green curry, or opt for the Royal Thai Taste Samrub menu to sample dishes like miang pla too (grilled mackerel salad wrap) complete with Hua Hin sturgeon caviar.

See what our inspectors said about R.Haan here. 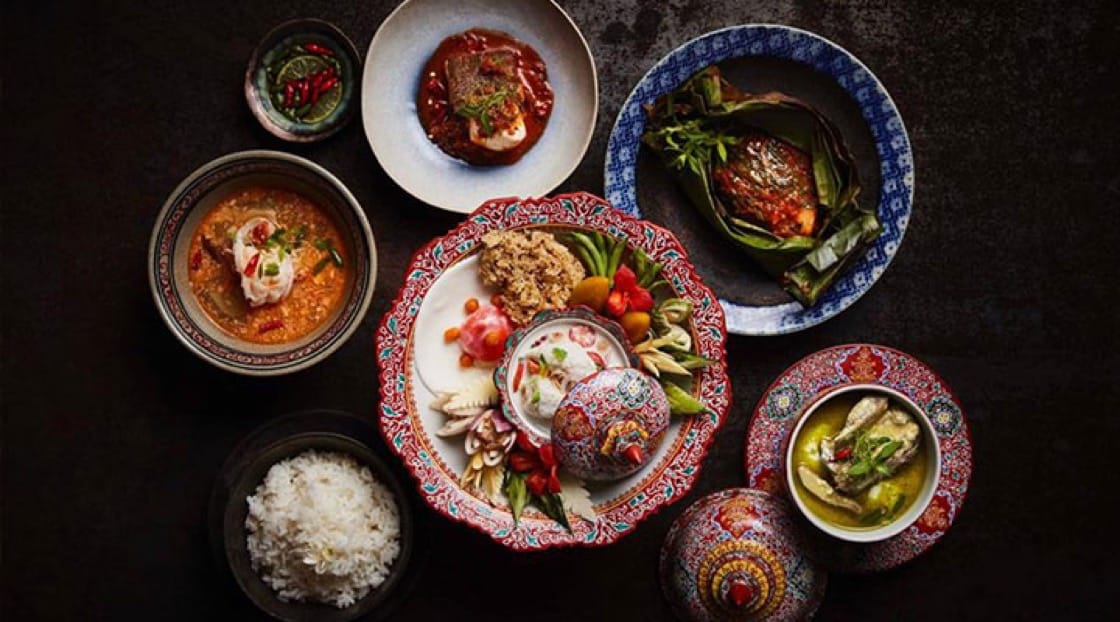 Along with Thai cooking, R-Haan also preserves culinary heritage through the use of traditional Thai ceramics that was once used at the Royal Palace.

La Dotta (Michelin Plate)
There is something distinctly romantic about fresh, handcrafted pasta, and La Dotta has us completely heart-eyed. The tiny pasta hole on Thonglor soi 9 is a colourful ode to one of Italy’s most famous dishes, serving variations like tagliatelle, tortelloni and garganelli all of which are hand-made every morning with 100% natural Italian flour. The Tortelloni 4 Formaggi filled with Italian cheeses served in a neat puddle of 24-month aged Parmigiano-Reggiano fondue will make you want to sing, while the very Instagrammable (read: cute as a button) bomboloni doughnuts stuffed with Italy’s favourite sweet flavours— Nutella, tiramisu, ricotta and honey— are too tasty to feel guilty about.

See what our inspectors said about La Dotta here. 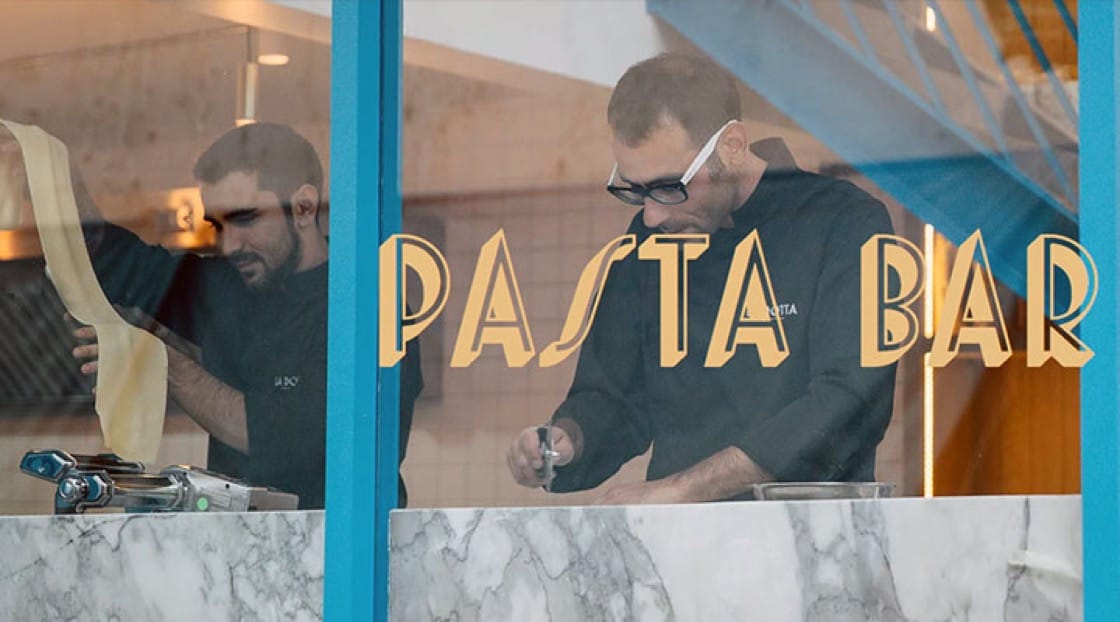 It's all about pasta at La Dotta.

Patara (Michelin Plate)
Patara’s laid-back and cosy space inside a converted heritage home makes fine dining feel approachable with its contemporary décor and vast garden space. The restaurant is tucked in soi 19 and has a stillness that feels luxurious in the buzzing city. It’s a great place to ease your out-of-town guests into Thai cuisine with authentic, approachable dishes that are local-approved. Plus, the granular attention to detail in flavour-packed dishes like the almost-too-pretty-to-eat assorted appetiser platter is sure to impress.

See what our inspectors said about Patara here. 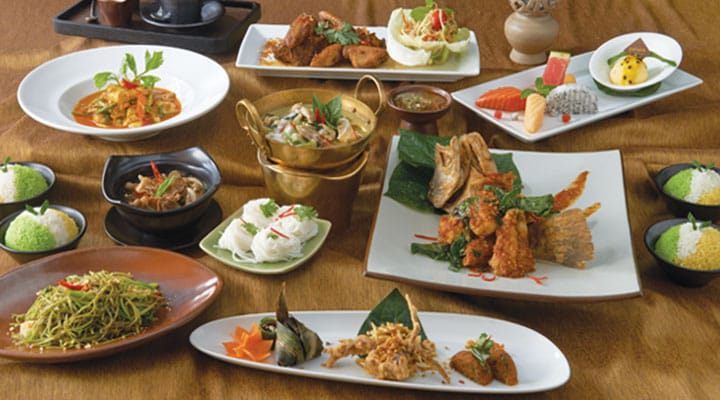 A sample of the gastro set at Patara.

Suppanniga Eating Room (Michelin Plate)
This outlet fan-favourite Thai food joint Supanniga Eating Room serves three-generation-old recipes of staple dishes that have won the hearts of both locals and visitors alike. The restaurant successfully balances a refined (though, nowhere near stiff) atmosphere with plates that boast authentic flavour for a price that doesn’t make your eyes water. The menu here is extensive, which means you’ll want to come with a bigger group to order more. On our list are the chilli pork crackling dip appetiser, crab curry, and a perfectly flaky deep-fried catfish.

See what our inspectors said about Supanniga Eating Room here. 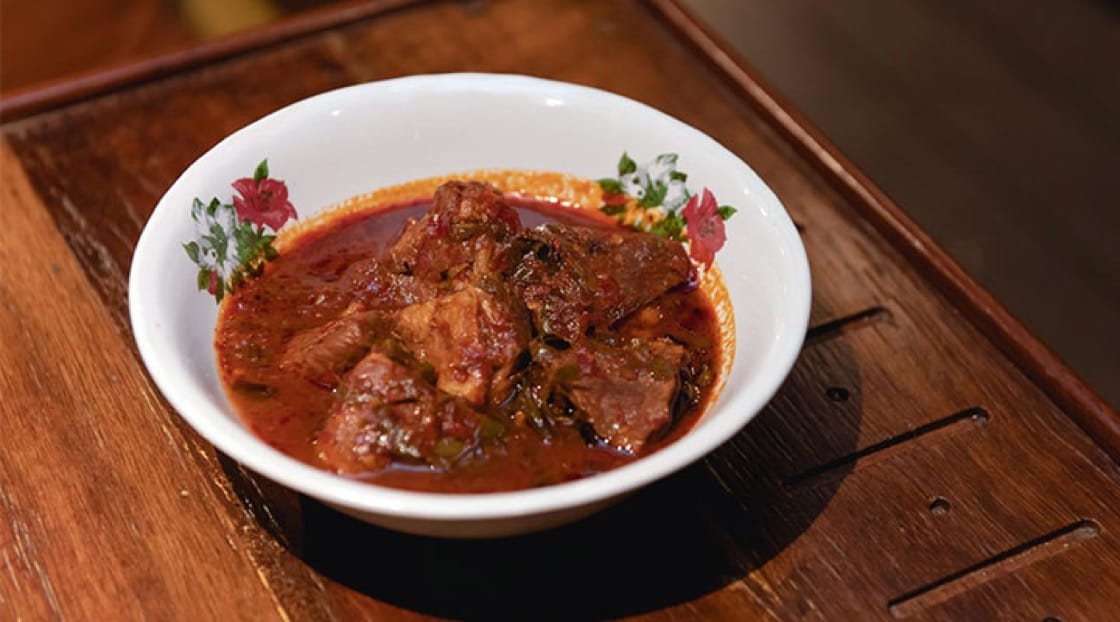 Tempura Kanda (Michelin Plate)
Go ahead, put all your trust into the hands of Chef Chaloemrat. He’s gathered unblemished stalks of asparagus, plump mushrooms, whole pink shrimp and other seasonal bites and is frying them to perfection at this tempura omakase in Thonglor soi 5. What the space lacks in frills it makes up for in piping hot tempura that’s crispy without feeling greasy. In traditional omakase fashion, seats are limited so be sure to book ahead.

See what our inspectors said about Tempura Kanda here. 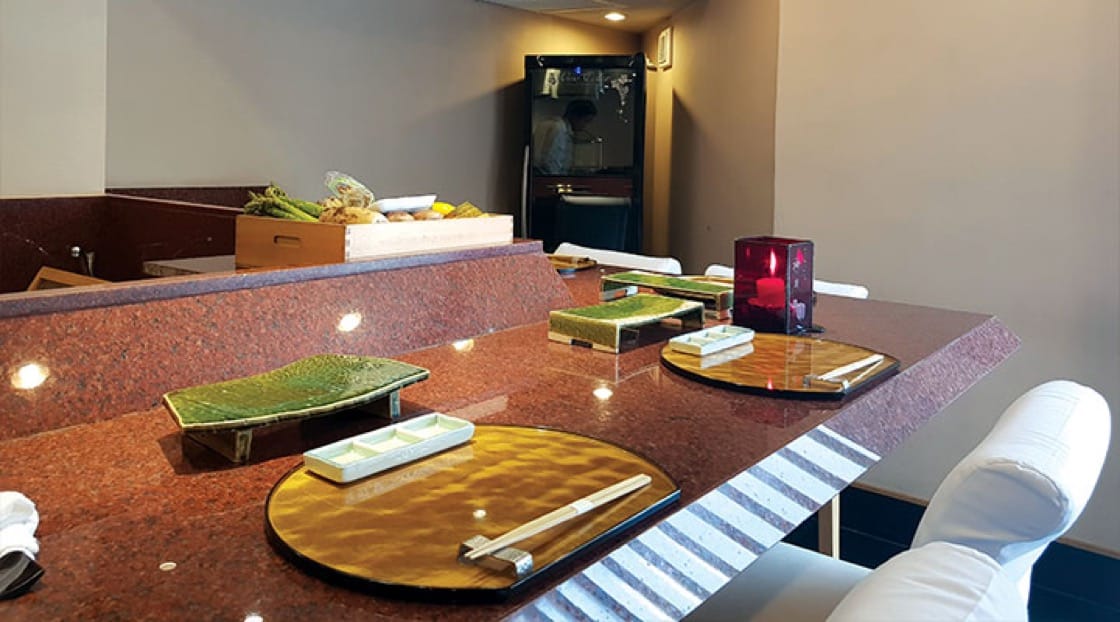 As one of the first omakase places in the city, the entire dining experience is placed in the hands of the chef, especially at the counter, where you can watch him work.

Soul Food Mahanakorn (Bib Gourmand)
Opened by a Pennsylvanian expat with an affinity for soul-soothing flavours, the hardy mouth-watering dishes at Soul Food Mahanakorn are just what the doctor ordered. The family-style menu is brimming with choices— most of which we’d argue are worth trying— so you’re better off coming with a group so that you can rightfully fill the table with curries, salads, and plates of full-flavour meats. Make sure to try the red curry with smoked duck and rambutan and a set of the sticky tamarind ribs that go all too well with the tequila, fresh ginger and coconut-mixed Chino-Latino cocktail.

See what our inspectors said about Soul Food Mahanakorn here. 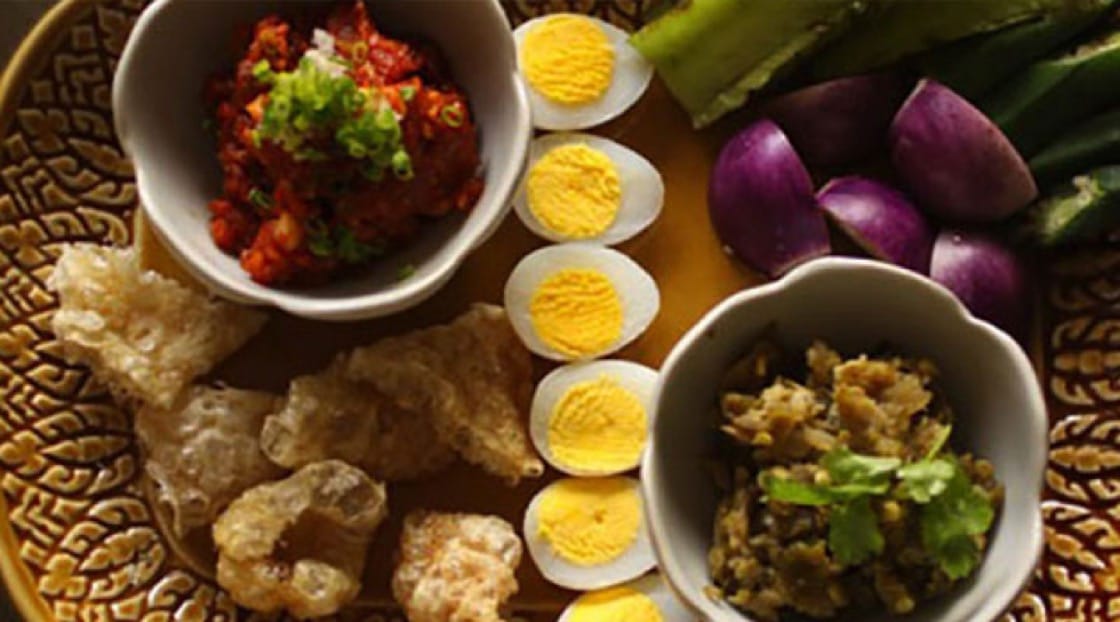 Thaipioka
There are few better places to chill out post-meal with a digestif than decidedly cool Thaipioka. The long teak bar, which looks especially sleek against the dim orange lighting, takes up most of the plant-brimming space. Since the guys behind Q&A and Sugar Ray are responsible for the bar, solid drinks are all but guaranteed. Here, Thai flavours take precedence so you can expect ingredients like turmeric and chilli paired with spirits like black sesame-infused whiskey and beef-fat infused rum. 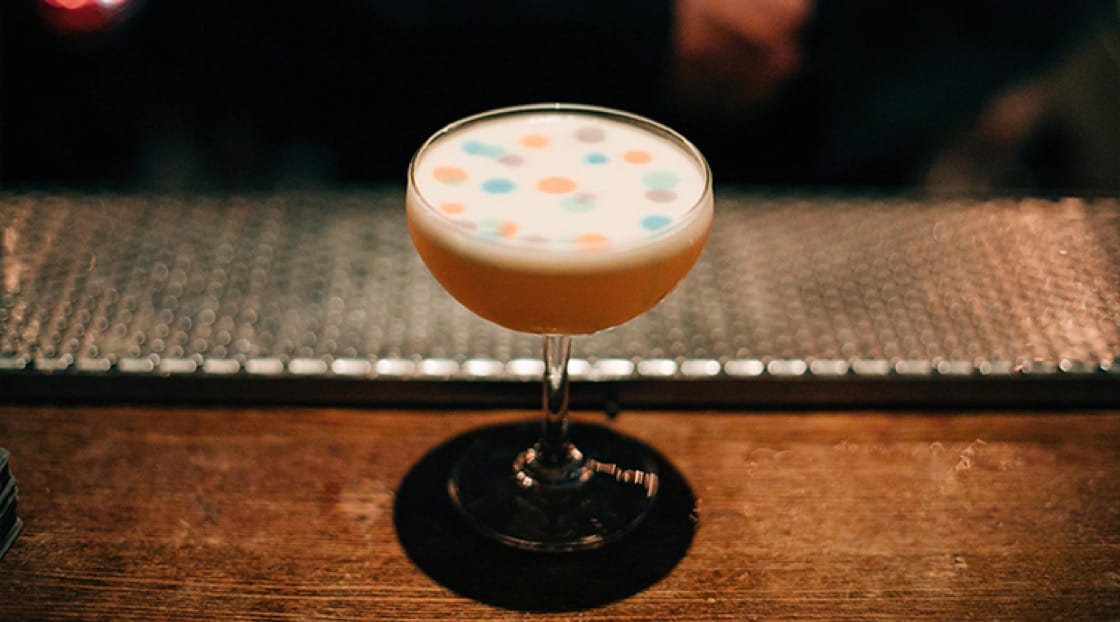 Backstage's Forgetful Painter is just as pretty as it is tasty.

Backstage Bar
Intimate yet with an energy that makes you want to keep the party going, Backstage Bar is where you’ll want to end the night. The bar, which is hidden behind plush red curtains, offers a chilled-out vibe that none of the area’s drinking holes seem to offer. Classics are done exceptionally well here, but we’d argue the chamomile-infused vodka and passion fruit laden Forgetful Painter cocktail is the next best choice.

MICHELIN Movers And Shakers: The Next Chapter Of Le Normandie, Updates From Sühring, Le Du, And More In Thailand

Find out what’s happening among the top restaurants and chefs so you don’t miss a thing.

Some of the best spots to enjoy breezy Bangkok.

Baan Somtum: Delicious Isan Dishes That Are Perfect To Share With Friends

These mouthwatering menu items straight from the mortar that you shouldn’t miss.

beer pairings street food
All articles of Dining Out

Here's an easy chicken menu you can try at home.