Helmed by chef Tetsuya Wakuda, two-MICHELIN-Starred restaurant Waku Ghin at Marina Bay Sands has been constantly praised by our MICHELIN Guide inspectors for its impeccably executed dishes that are made with top-notch ingredients. 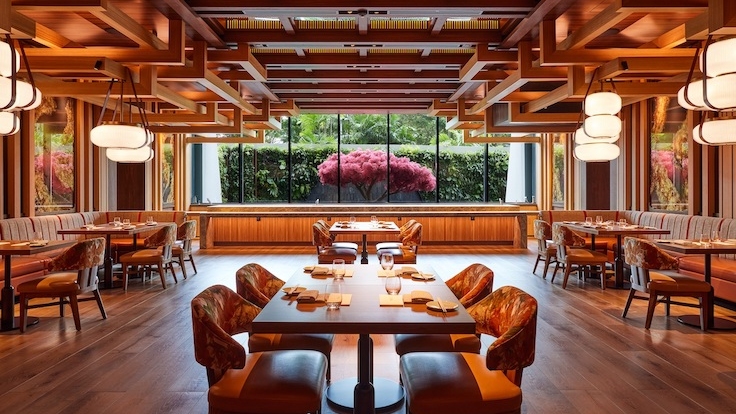 Last 17 April 2022, the Japanese chef unveiled his new and eponymous restaurant concept, located at the heart of Marina Bay Sands’s hotel lobby: Wakuda. A joint venture with hospitality group 50 Eggs, the restaurant boasts a majestic up-lit Kumiki wood façade, designed by award-winning design firm, Rockwell Group. The restaurant aims to celebrate the beauty of craftsmanship and nature, infused with an element of Tokyo’s unparalleled urban energy, modernity, and spontaneity. Following Singapore’s launch will be the opening of Wakuda at The Venetian® Resort Las Vegas. 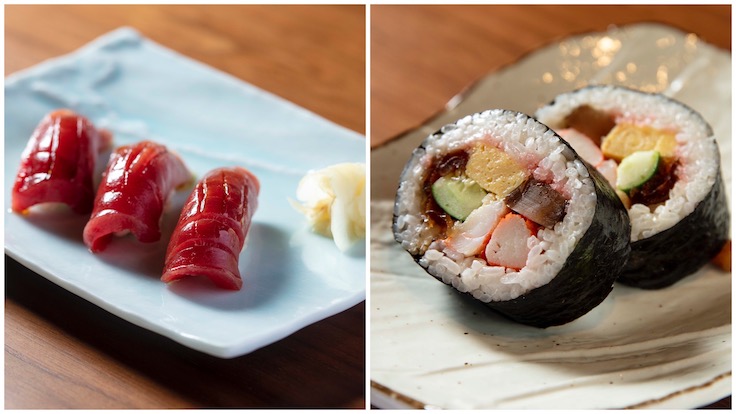 Akami (lean tuna) prepared as sushi and as a sushi roll with with shiso, cucumber, and mustard. (Photo: Marina Bay Sands/Wakuda)

Wakuda takes pride in the ingredients featured on its menu, including supreme quality Tokujyo AA uni from Hokkaido and A5 wagyu and black pork from Kagoshima; fresh, artisanal yuba (beancurd skin) from Kyoto is also used, as well as other diverse international produce such as the bright-hued Tasmanian ocean trout, sweet scampi, and Ōra King salmon from New Zealand. 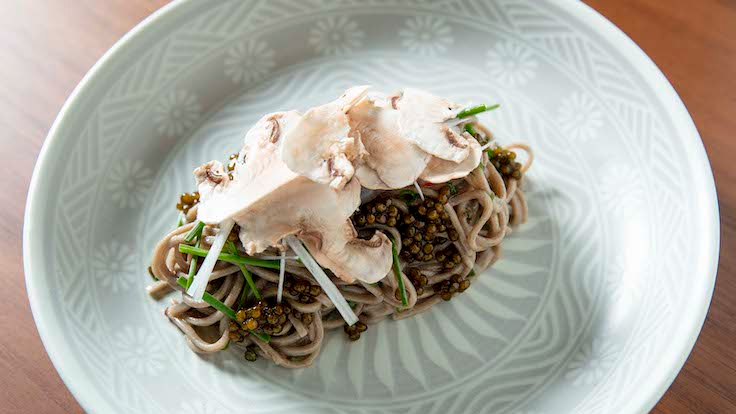 Guests can also look forward to Okinawan produce such as sodeika (squid), umibudo (sea grapes), and mozuku (Okinawan seaweed), as well a premium musk melon and fresh wasabi from Shizuoka, from where the Japanese chef hails from. 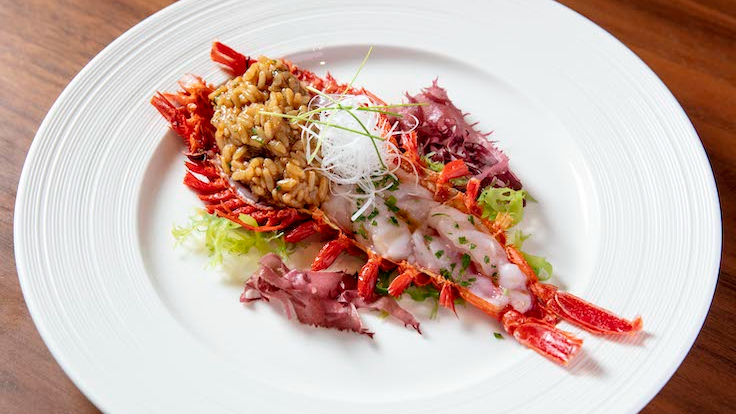 With all of these ingredients coming into play, highlights of the à la carte menu include akami (lean tuna) sushi, carabinero with fresh tarragon risotto, and classic saikyo yaki (miso-marinated grilled fish); and for dessert, a green tea and azuki bean terrine with lace waffle. 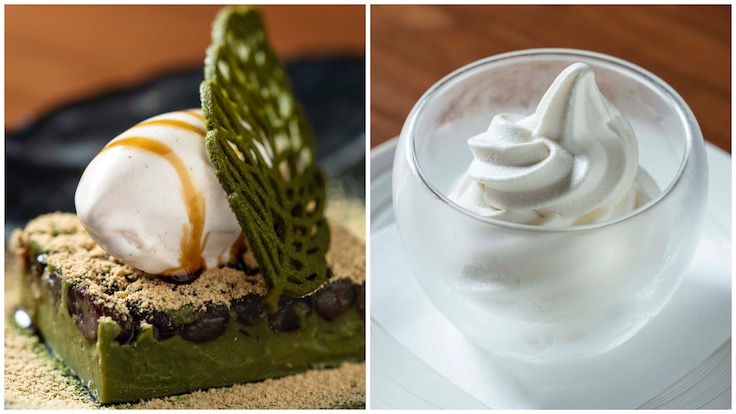 An extensive wine selection is also offered at Wakuda, along with handcrafted cocktails such as the restaurant’s signature Lady from Shizuoka, which is a mix of Roku Gin, strawberry sake, and sakura liqueur, topped with a frozen strawberry lollipop. Another featured tipple is the Yuzu Garden, made with a Haku Vodka base and concocted with St. Germain and citrusy yuzu, finished with a dainty sprig of kinome leaf. 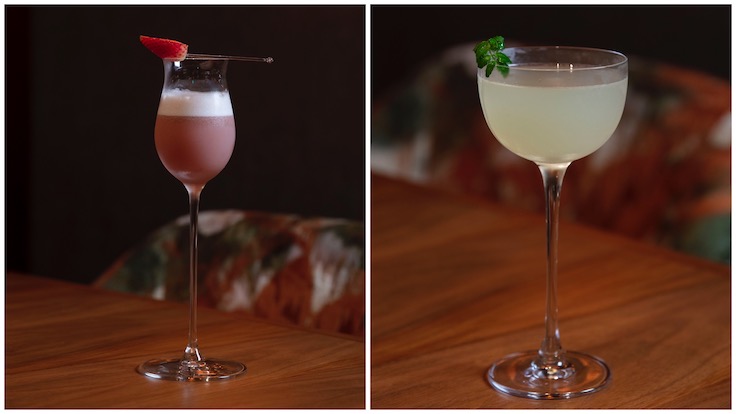 “Wakuda represents an evolution of my culinary work to date. It is a fresh canvas where I can dream up new possibilities to enable diners to journey across time and seasons,” says chef Tetsuya. “From the sourcing of exclusive produce, down to every design element and fine craftsmanship, the level of precision and detail in the cuisine style and presentation is truly remarkable. We envision Wakuda to be a vibrant and fun dining experience amidst the bustling Marina Bay Sands, and I cannot wait to unveil it to our guests.”

Book a stay at Marina Bay Sands here and reserve a table at Wakuda here. 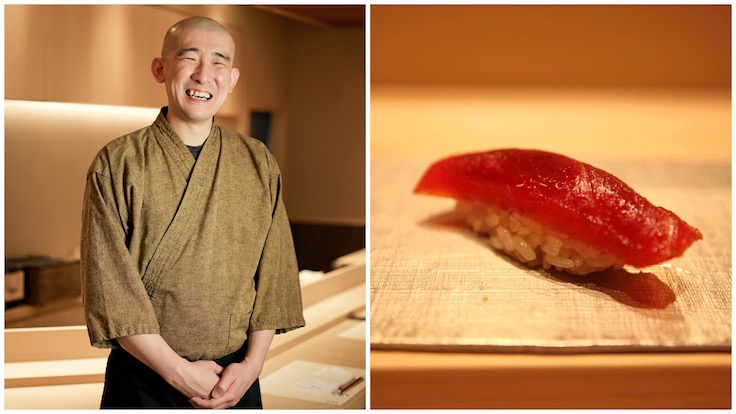 When translated from Japanese, "Shin" means "New", while "Yasuke" is a nod to what sushi restaurants were called during Japan's Edo period. According to Kimura, Shin Yasuke serves only traditional sushi. As compared to Sushi Kimura, which is known for its omakase format, Shin Yasuke will focus on sushi alone, with the same sushi rice, shari, wasabi, and soy sauce used at his MICHELIN-Starred post.

One of the highlights at Shin Yasuke is that most of the seafood are flown in from Kimura's hometown of Kanagawa and are caught especially for him by his fisherman friend. The kitchen will be helmed by the team from Sushi Kimura, with Alan Oh Wee Kie assuming the role of head sushi chef and Ren Jie as sushi chef. 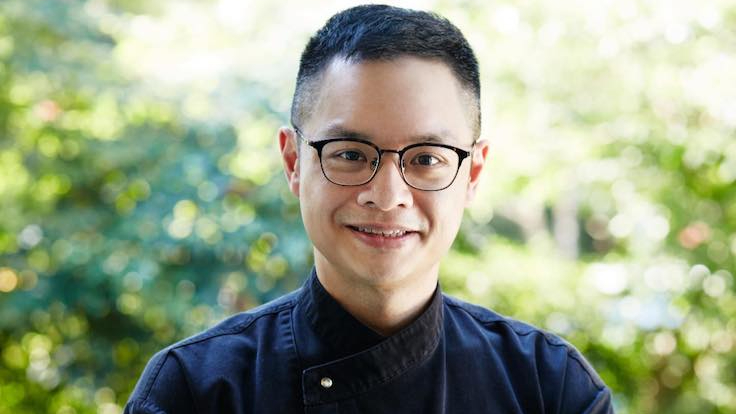 Widely known as the chef of one-MICHELIN-Starred Candlenut, which serves traditional Peranakan fare with a creative twist and an Indonesian touch, Malcolm Lee is set to open his second restaurant, Pangium, this summer.

Named after the Pangium tree that sprouts from the buah keluak seed, nestled within The Orangery at the Gallop Extension of the Singapore Botanic Gardens, Lee's new restaurant will be intentionally planted in the same location of its namesake.

“The intimate nature and location of Pangium gives us the opportunity to delve deeper into our heritage and cuisine, as well as explore the creative side of where we can go from here,” the Singaporean chef and restaurateur explains.

Compared to Candlenut, which serves à la carte and family-style meals, Pangium will be tasting menu-only restaurant that will feature what Lee coins as "contemporary Straits cuisine". Similar to his MICHELIN-Starred post at Dempsey, the dishes at Pangium will be rooted in an ethos of discovery and creativity. “The produce, techniques, and knowledge within our reach today kindle our curiosity and instinct to continue to create as our grandmothers and grandfathers did," he says. 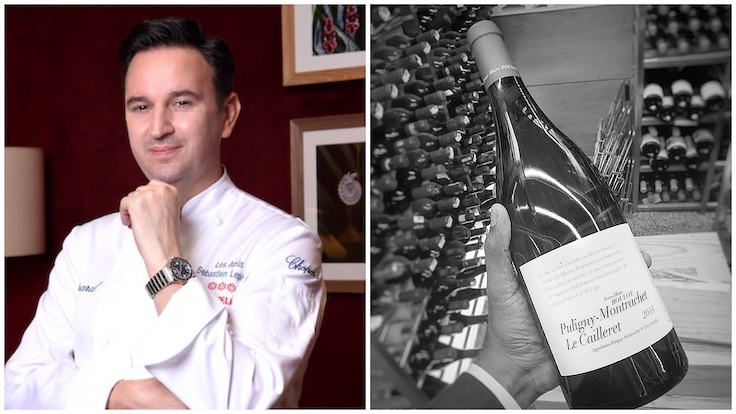 With wine being an integral part of three-MICHELIN-starred Les Amis's dining experience since it first opened in 1994, the French restaurant is set to launch Magnum Room in May 2022. Paying homage to winemakers who have committed their lives to perfecting their craft, Magnum Room, which is located inside Les Amis itself, is carved out to be an exclusive space for an immersive and memorable experience for French food and wine pairings.

Despite having already reached the highest accolade in the MICHELIN Guide, chef Sebastien LePinoy is determined to continue pushing the envelope and to provide the guests of Les Amis with more unforgettable experiences. “As a three-MICHELIN-Starred restaurant, our guests are looking for an experience. In my opinion, having just a typical private dining room is no longer a novelty. We need to do things differently. Dining is like the theatre, we need to give our guests some drama to keep them enticed,” he shares. 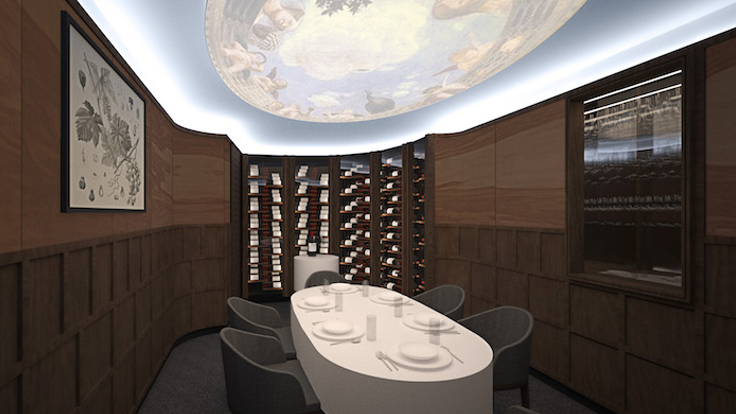 Inspired by the wine caves peppered across France, the design of Les Amis's Magnum Room boasts custom display cabinets with timber-framed glass doors and suspended timber racks to reflect the rows and columns of wines in the cave. In the centre of the room lies a custom-designed oval-shaped dining table, carved from Opolopo Granite. Above the table, the ceiling is indirectly lit from the walls, providing uniform ambient lighting to the room, with a backlit elliptical-stretched ceiling depicting an Italian Renaissance fresco by Andrea Mantegna as the centrepiece.