In less than a decade, we’ve seen the modern-day mall food court spin out of control, getting larger each year in both size and momentum. It was only in 2010 when Todd English opened his eponymous food hall in the famed Plaza Hotel’s basement. Not long after, small food vendors set up along the Williamsburg waterfront at Smorgasburg, hoping to gain such popularity that they could establish a brick-and-mortar. (In fact, Smorgasburg operators Eric Demby and Jonathan Butler have just opened a seasonal restaurant on The Highline entitled 180 Tenth, serving small plates and frozen Negronis perfect for summer.) Italian gourmands flocked to Eataly on its opening day in Manhattan’s Flatiron district, curious to see if Batali would be roaming the pasta aisle. Famed Danish chef Claus Meyer brought New Nordic cuisine to Grand Central Terminal with his Great Northern Food Hall. And after the World Trade Center and Brookfield Place opened for business, the working masses had two food halls to choose from: the eclectic Hudson Eats or its Francophile neighbor, Le District.

Across the East River in downtown Brooklyn lies the sprawling “food and entertainment center” known as DeKalb Market Hall, boasting 40 vendors that “reflect the cultural and ethnic diversity of the borough.” At the vendor forefront is Katz’s, marking their first outpost from the iconic space on Houston Street in the Lower East Side. Other notable eateries include Fletcher’s BBQ, Fulton Landing Seafood, Pierogi Boys and Ample Hills Ice Cream. 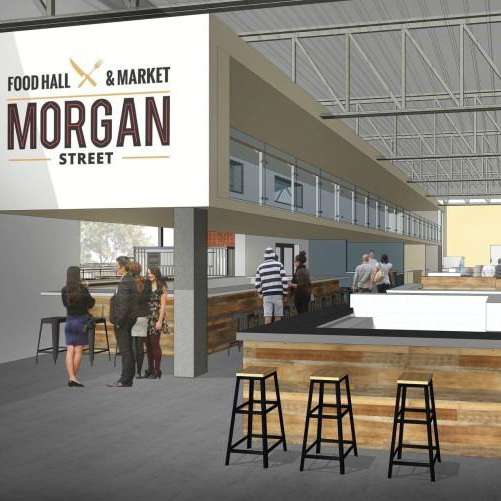 These openings are just the tip of the iceberg, as many more food halls across the country are said to open later this year and beyond. In August, Raleigh, North Carolina, will be the home to the 22,000-square foot Morgan Street Food Hall & Market in downtown’s Warehouse District. You’ll find over 60 local restaurants as well as food retailers here, offering “high quality, chef-driven specialty foods with a wide range of diversity.” Oak City Fish and Chips, Bella’s Wood Fired Pizza and Wicked Taco have all signed on to be a part of the space.
Detroit Shipping Co. touts themselves as a “restaurant collective and beer garden offering affordable upscale street food, two full bars, space for start-up retailers and galleries featuring local artists.” Restaurants that have signed on to the project include Brujo Tacos & Tapas, Detroit Dog Co. and Bangkok96 Street Food. The elevated shipping container is expected to open this fall.

Back in New York City, two mega food personalities will have dueling food halls at the forthcoming Hudson Yards. José Andrés just announced he will open a 35,000-square-foot Spanish food hall with the help of molecular marvels Ferran and Albert Adrià. The space is said to house tapas eateries and wine bars, as well as Spanish food purveyors. Andrès will be in cahoots with his friend Anthony Bourdain, who is already in the process of constructing his widely-anticipated Singaporean-inspired Bourdain Market, set to open in 2019.

It’s unclear when the food hall fad will eventually die down, but there is one thing for certain—it isn’t going anywhere anytime soon, and Hudson Yard’s Pier 57 will be a culinary force to be reckoned with.
Advertisement