In Korea, outside of the normal universal milestones, there is always an occasion to raise a glass for. Whether you are getting together with colleagues after work to blow off steam over some barbecue or catching up with friends over a pile of freshly fried chicken, chances are there will be drinks involved and someone is sure to suggest “one more round!”

Just as they take their drinking seriously, Koreans also take haejang—which literally means to ‘release oneself of a hangover’—seriously. So, what does the average Korean crave after a night of overindulgence? Why, soup and rice—aka, hangover soup—of course! Koreans swear by it. “Did you eat something (to get rid of your hangover)?” is a typical greeting among those who chugged down a few too many the night before, and that “something” almost always implies something hot and soupy.

There are many different varieties of haejang-guk you can find depending on the ingredients used. The following are six of the most iconic hangover soups which—funny enough—also happen to be popular drinking foods as well. 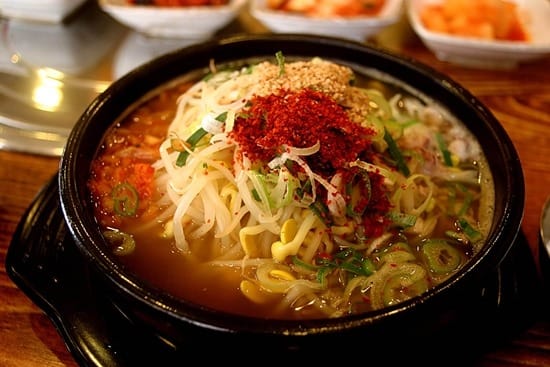 According to a recent survey on some 600 office workers by local job search portal Job Korea, kongnamul-guk was the number one hangover foods Koreans craved after a night of heavy drinking. It’s a deceptively simple dish that requires few ingredients: bean sprouts, water (or, basic dried anchovy stock) and salt. This means that to make a really good version, quality ingredients are a must. Many restaurants serve the soup Jeonju-style, bubbling away in an earthenware pot with rice (already submerged in the broth), plenty of wilted bean sprouts, chopped kimchi, a freshly cracked raw egg and chopped green onions. The soup is often seasoned at the table with a dollop of salted and fermented shrimp for extra umami. Fact: eggs contain large amounts of cysteine which is known to break down the hangover-causing toxin called acetaldehyde. Also, bean sprouts are packed with an amino acid called aspartate which helps to create enzymes that break down alcohol in the liver. Jeonju-style bean sprout soup is traditionally, but not always, served with a side of moju, a low-alcohol drink prepared by boiling makgeolli with eight medicinal herbs including ginger, jujube, licorice root, ginseng, arrowroot and cinnamon powder.
Advertisement 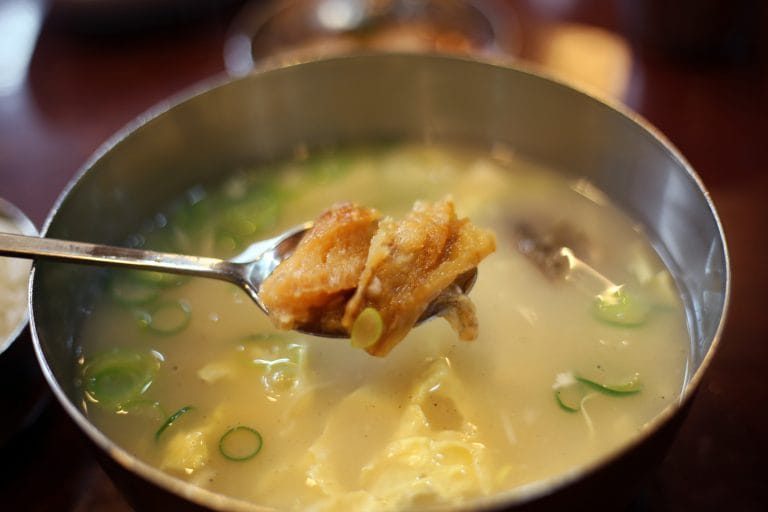 Like kongnamul-guk, bugeotguk, or dried pollock soup, is a mildly seasoned but flavorful hangover soup. A classic bugeotguk is prepared by shredding dried pollock that has been pre-soaked, lightly sautéing the pieces of fish in some sesame oil (often with sliced daikon radish), adding dried anchovy stock (or water) and boiling until the liquid turns opaque. The soup is seasoned with salt and pepper and garnished with chopped green onions. It also often contains cubes of tofu as well as silky smooth ribbons of eggs that have been beaten and whisked in at the last minute. Another fun fact: dried pollock is rich in amino acids that protect the liver and help it recover. 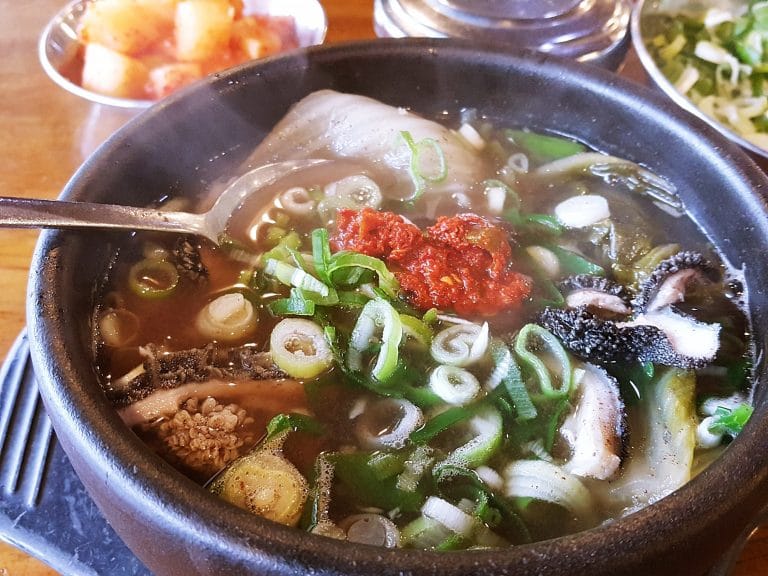 Admittedly, the name does not sound appetizing, even more so—I imagine—to the hungover and uninitiated, but it isn’t as terrifying. Aside from its mildly irony flavor, oxblood, flavor-wise, yields little influence to the overall dish. When cooked right, the texture of congealed oxblood is smooth with a texture of a firm pudding. Overcooked, it will turn rubbery. The soup stock is typically made by boiling ox bones and predominantly seasoned with doenjang. Other common ingredients in the soup include chunks of beef, tripe, cabbage leaves, dehydrated and reconstituted turnip tops, bean sprouts and green onions. It’s definitely a hearty dish that will leave you breaking out in a sweat by the end. 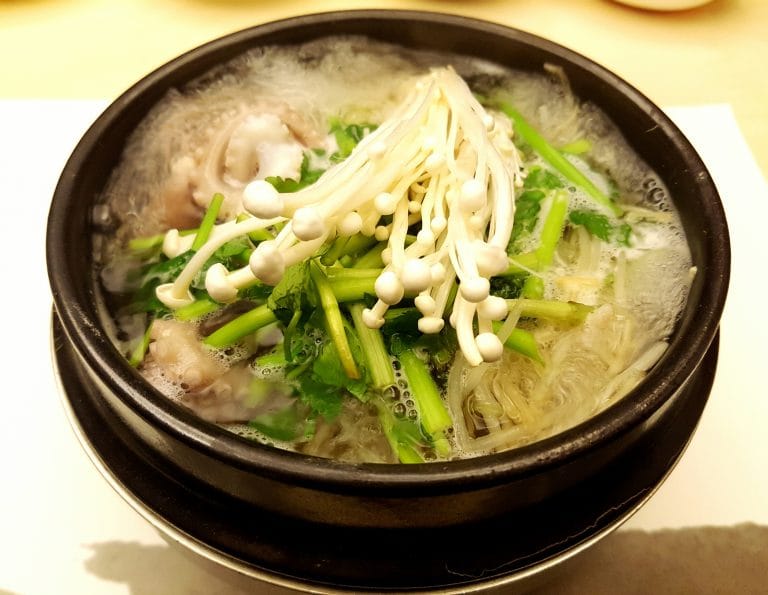 Like Japan, the meat of some—not all—pufferfish is considered a delicacy in Korea. Pufferfish has to be prepared only by licensed chefs who have received intense training to eliminate the deadly toxin from the fish. How deadly you ask? There is enough toxin in one pufferfish to kill 30 adult humans, and there is no known antidote. Fatal accidents happen every year from eating improperly handled fish. But Koreans will gladly pay a steep price to enjoy this delicate white-fleshed fish, which can be prepared in various different ways, including as a soup. Most restaurants will offer the soup in two different versions: maeuntang (spicy) and jiri (clear non-spicy). Bok-jiri, laden with water celery, bean sprouts and daikon radish, is the preferred version for those seeking to chase their hangover as it is easier on the stomach than its fiery counterpart. Bok-guk is especially popular in the port city of Busan. 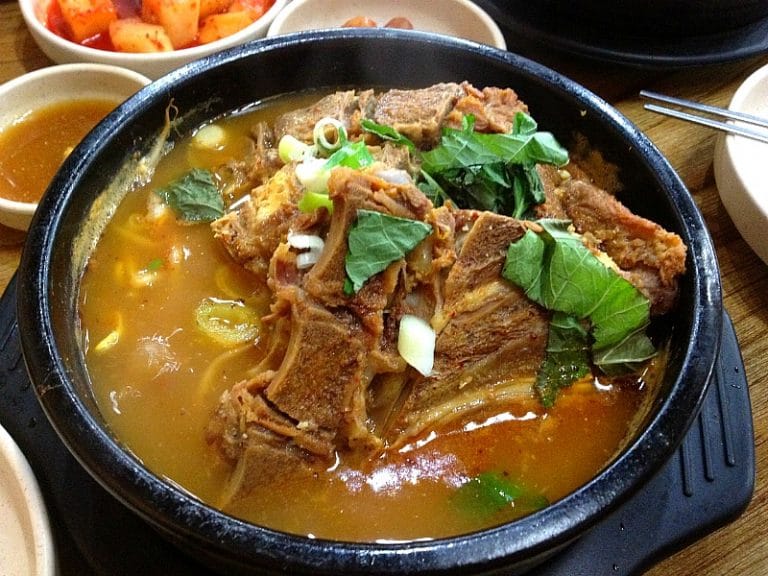 What is there not to like about this rich and spicy pork soup piled high with meaty chunks of pork spine? Add to that the soft leafy vegetables that have been simmering in the liquid until they taste like the broth itself. The addition of crushed perilla seeds is a must as they add a distinctly earthy and nutty fragrance to the soup. The name bbyeo haejang-guk literally translates to “bone hangover soup.” You may also know this soup by another name—gamjatang. Whereas gamjatang is served communal style in a large pot, bbyeo haejang-guk is dished out in individual portions in earthenware bowls that preserve the soup piping hot until the end. Start by loosening the fall-off-the-bone tender meat from the bones. You can mix the meat into the soup or eat the meat as is before moving onto the soup. Feel free to mix the rice into the broth as well—just as the locals do it. 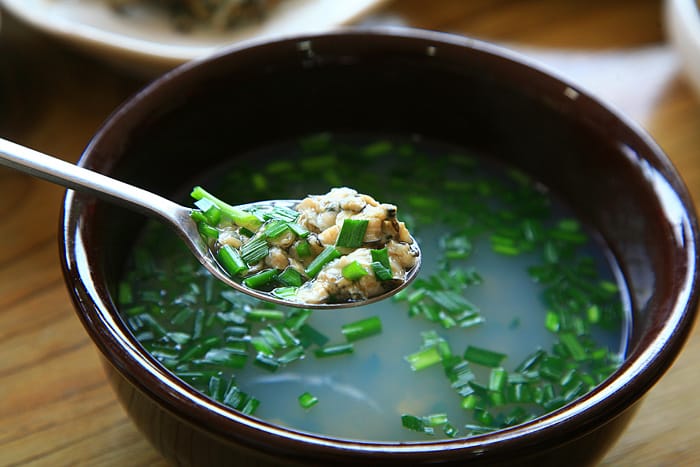 A specialty of the Gyeongsangnamdo Province, particularly the Hadong region, jaecheop-guk is a clear soup made by boiling small golden freshwater clams and seasoning it simply with salt. The soup may be garnished with green onions or Chinese chives. Although small in size compared to the other more common clam species such as the manila clams, golden clams are just as sweet and release an incredible depth of flavor to the broth. Golden clams are also rich in taurine, an organic compound known to help reduce liver damage.
This story is written by Yerica Park and first appeared on MICHELIN Guide Seoul. Click here to read the original article.
Advertisement
Advertisement

9 Places To Dine With Luxury Brands

Tuck in to food and drink at the crossroads where fashion and food embrace.