If you walk into the kitchen of a Chinese restaurant, it’s likely you would be welcomed by the sizzling sounds from a wok of boiling oil. Deep-frying makes up a large part of Chinese cuisine. Food items that come out of hot oil are sometimes served directly, or proceed to be cooked further, with the flavours turned up a notch.

Through contact with sizzling hot oil, raw ingredients are cooked quickly. Their crust turns amber and crunchy, while the interior remains tender. 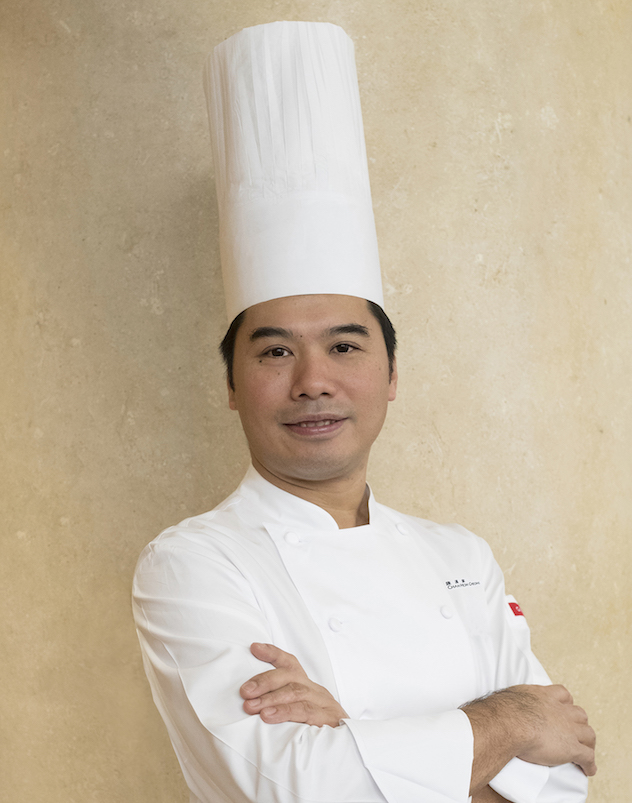 “Deep-frying enriches the texture of the food. It applies to all kinds of meat, poultry, seafood and root vegetables,” explained chef Chan Hon Cheong, who helmed the kitchen of two Michelin-starred Ming Court, and is now in charge of One Harbour Road. He pointed out that temperature control, a determinant factor to the result of a deep-fried dish, is a foundational skill to all Chinese chefs, and also a metric to assess their capabilities.
Deep-Fried Tofu: The First Deep-Fried Dish of A Chinese Chef

“In a restaurant kitchen, deep-frying tasks are delegated to junior cooks as a way to train up their sensitivity to cooking temperature. Many people start with deep-fried tofu. You can tell they reach the next level if they master Chinese crispy fried chicken,” Chan said. He also noted the burn marks on a cook’s hands also give away his experience. “Young chefs with less understanding on different food produce or deep-frying temperature are prone to getting scarred by the hot oil popping up. As their technique matures, the marks on their hands would also subside.”

For a dish as simple as crispy tofu, there’s no room to hide if the cook fails to grasp the right cooking conditions. A piece of tofu is cut, pat-dried and coated with seasoned frying powder. Then it all comes down to the time that it sits in the oil.

“If the oil is too hot, the tofu will burn in the exterior and be cold inside. Reversely, the frying powder will be washed away by oil if it is not hot enough,” Chan remarked.
Advertisement 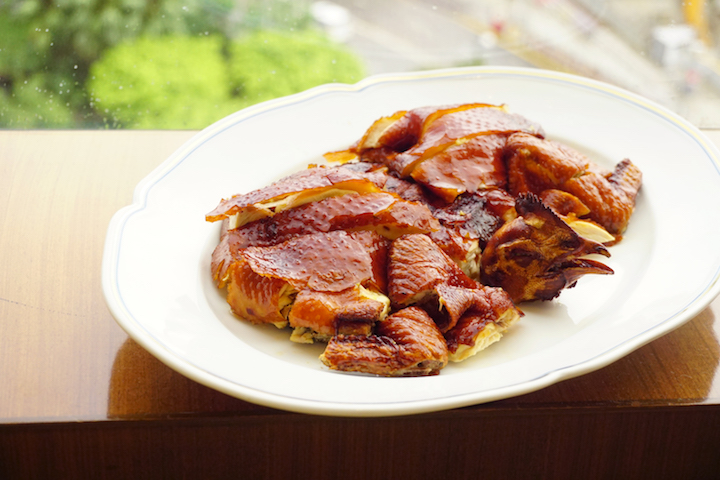 Chinese crispy fried chicken done well is a beauty to behold and taste. A perfectly-fried chicken shouldn’t have liquid oozing out. (Photo: Ou Peichang)
Bring on the Heat

Seasoned chefs can tell if the oil is good for frying just by watching it. Bubbles, white smoke and clicking sound are all signs of overheated oil. Home cooks can test the temperature of oil by adding some frying powder into the wok. If no bubble form around it, it means the oil is too cold. On the other hand, the oil is too hot when the powder changes colour instantly.

“I like to keep the oil temperature on the higher side. I always prepare some extra oil right next to me, so I can add it to cool down the wok whenever it gets hotter than needed,” Chan said. He also suggested to turn off the heat at the moment of adding the ingredients, then put the fire back on to maintain the frying temperature. It helps to reduce the risk of the food catching fire.

The amount of oil and ingredients are also important elements that would affect the outcome of the dish. The more ingredients added, the quicker the oil temperature drops. At this point, one should turn up the fire. If there isn’t much in the wok, the heat would be concentrated and the chance of burning the food would go up. Consider lowering the temperature as you see fit.

In addition, there should be enough oil to not only cover all the ingredients, but also allow room for them to inflate. Otherwise, the pieces will stick together, resulting in uneven heating and colouring, and damaging the brilliantly golden crust that wows diners. 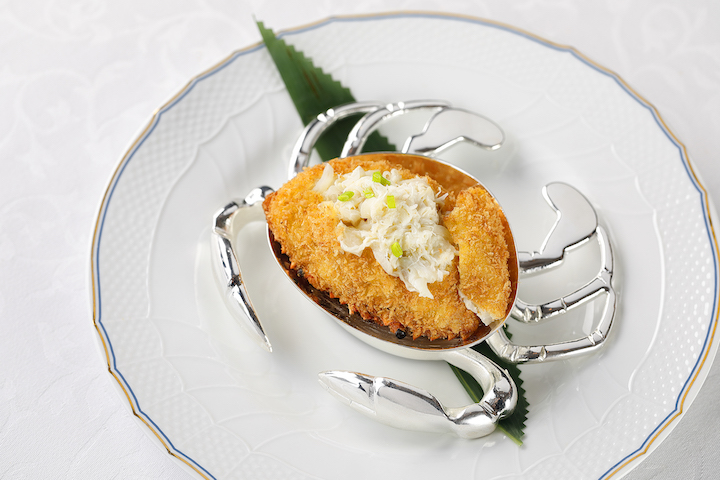 Baked stuff crab shell owes its crunchy cutlet exterior to a layer of flour, which seals the fillings of wok-fried crab meat, coconut milk, onion and roux tightly inside the shell. (Photo: One Habour Road)
Temperature is key

While the significance of temperature can’t be more strongly emphasised in deep-frying, the tricky part remains in the fact that there isn’t a clean-cut indicator on what needs to be cooked on what temperature. Popular wisdom tells us to steam eggs gently and meat on high heat. Western theories define hot oil from 180°C to 240°C. Not much of these is relevant to deep-frying in Chinese cuisine.

As for the double frying technique which has become more popular in recent years, Chan believed it isn’t always applicable, especially in the case of seafood. Instead, turn up the heat at the end of the process to release the oil in the ingredients and create a gilded, crispy surface. An exception where double frying actually makes a difference is sweet and sour pork. As the meat is cooked through, rest it for 5 minutes before putting it back to the oil, so that the crust is fortified to stand up to the sauce.

“In addition, time-consuming dishes like Chinese crispy fried chicken and taro dumpling are deep-fried in advance and re-fried when an order is placed,” Chan said. 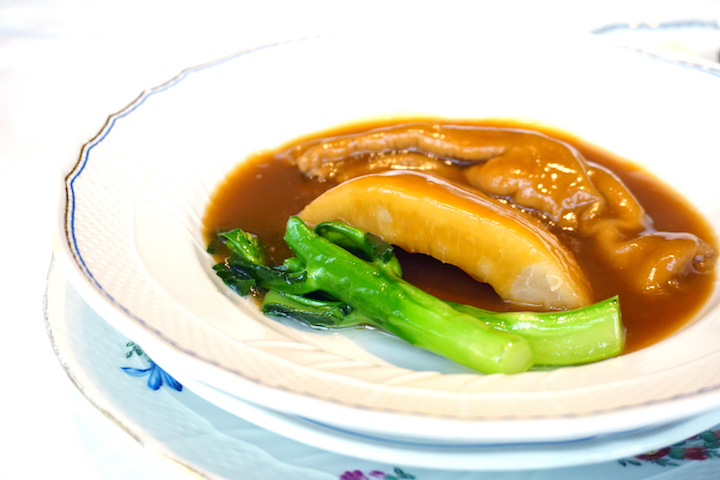 To prepare braised pomelo pith with shrimp roe, the pomelo pith needs to be deep-fried gently for 15 minutes to break down its fiber. In this way, the pith achieves a gooey consistency after braising. (Photo: Ou Peichang)
Deep-frying as an Intermediate Process

Deep-frying isn’t just appreciated as a standalone cooking technique. On many occasions, ingredients are par-fried before finished in other methods. Lobster in broth is a good example, where Chan deep-fries the crustacean to 70%-80% cooked then transports it to boiling broth. The advantage of such treatment is to stabilise the shape of the lobster and secure its jus in the meat.

Another signature of Chan, braised pomelo pith with shrimp roe, takes on a similar approach.

“Both the pomelo pith and goose web need to be par-fried before braised. The goal is to soften the fibre inside the ingredients. It should take the goose web 15 minutes on low heat until the skin inflates a bit. If the oil is too hot, the skin might break, affecting its appearance and smooth texture,” Chan said.

The unassuming pomelo pith is deep-fried under the same conditions. It is rinsed and dried afterwards before steeped into cooking fish stock for more than an hour. Par-frying renders the pith melting quickly in the mouth, unleashing the umami of the fish stock and shrimp roe it absorbs.

Regardless of its role in the entire cooking process, deep-frying is a task of care. It demands attention to the produce and temperature of oil. According to Chan’s descriptions, a successful deep-fried dish should bear a golden hue. The core of the food should be piping hot and succulent without being saggy. Most important of all, the surface has to stay crunchy for a good while.
This story was originally written by Ou Peichang and translated by Vincent Leung. Click here to read the original version of this story.
Advertisement
Advertisement

Roast Duck Is All The Rage In Hong Kong Restaurants

With the recent opening of several roast duck restaurants, we look at what makes these lacquered birds so popular in Hong Kong.