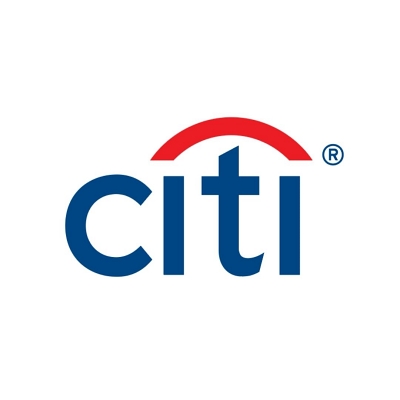 Vicky Lau opened TATE Dining Room in Sheung Wan 10 years ago. While she was initially planning to open a coffee shop, but — driven by her deep passion for fine-dining — the venture ultimately evolved into a small and exquisite restaurant which received its first MICHELIN Star just half a year after its opening. Last year, the restaurant was promoted to two MICHELIN Stars after maintaining its one-star status for nine consecutive years. In that time, Lau has built a unique brand for herself around TATE’s distinctive cuisine and aesthetics that seamlessly marry Chinese and French influencers.

Originally a graphic designer, Lau never expected her career pivot into the restaurant business to achieve the success it has today. “Innocence could be a blessing,” she said, looking back. “I just wanted to make delicious food and didn’t think too much about it.” Her biggest challenge at the beginning was to run the restaurant both as chef and restaurateur. The key to balancing the multiple demands of creativity and entrepreneurship is multi-tasking, says Lau: “I even learned how clean the drain!” 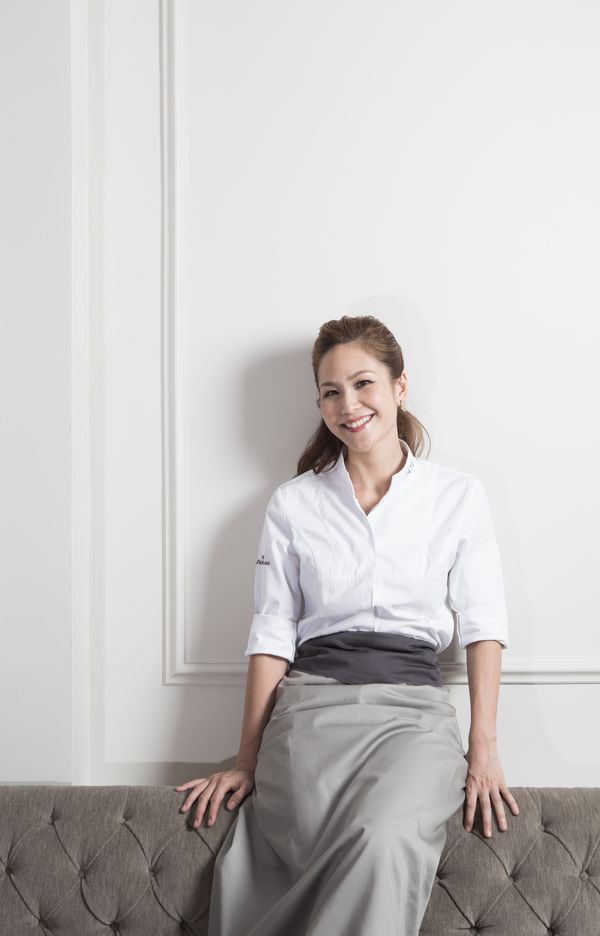 The setbacks and achievements in the first year were what laid a firm foundation for TATE’s growth over the past decade, according to Lau. The challenges and successes have become life lessons that are now deeply ingrained in her, Lau says humbly.

(Left: Vicky at Tate where she received the restaurant's first Michelin star.)

“I still read all the comments from our guests every day, whether through our reservation system or via online media. Different people have different tastes and opinions. As a chef, I have to digest their opinions and continue to improve.” 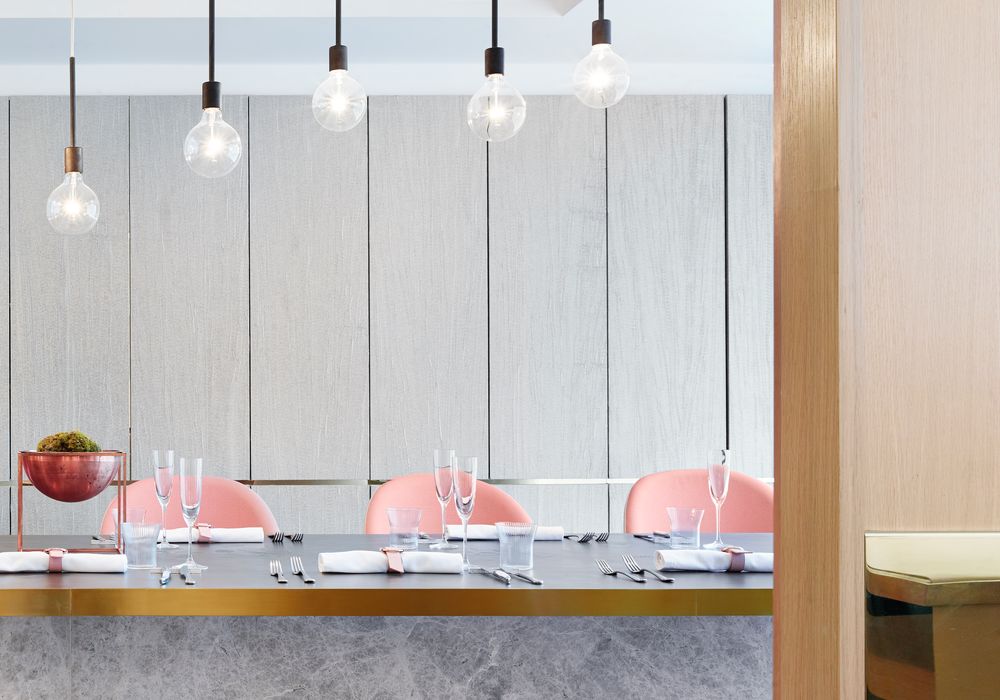 The turning point in chef Vicky Lau's career: when TATE Dining Room moved from its 26-seat location on Elgin Street to a new site spanning 3,800 sq. ft. on Hollywood Road.

TATE moved to its current location on Hollywood Road five years ago, as the expanded two-storey space gave Lau a wider canvas to showcase her culinary art. The roomier kitchen counters allow the team to experiment with more complicated techniques and dishes, and “even an order of twenty lobsters is no problem for our fridge,” she jokes. 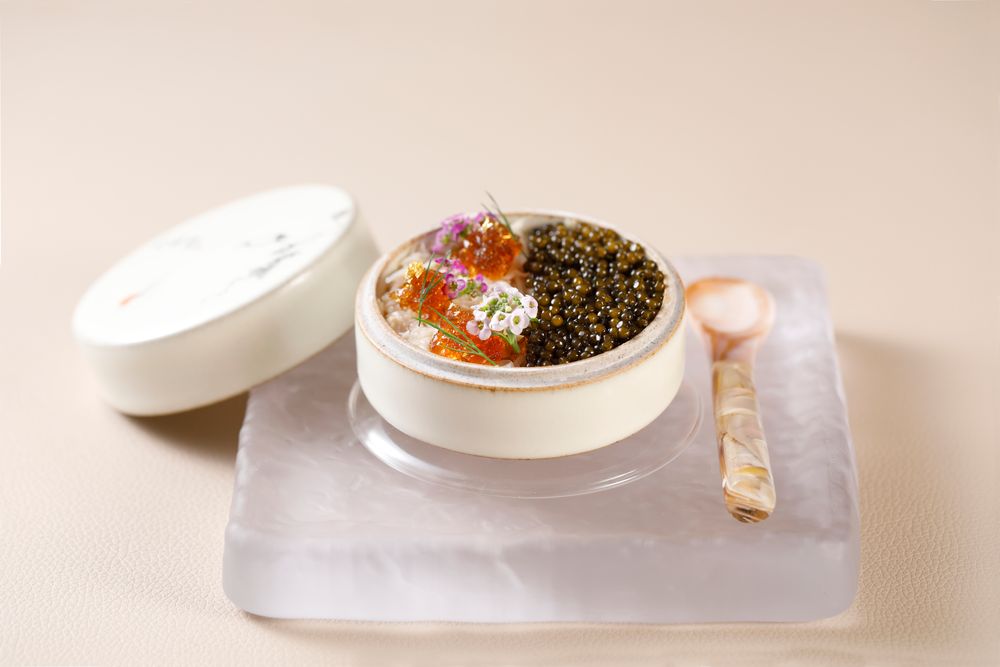 Signature dishes such as the Preserved Egg Mimosa and the crowd-favourite Sakura Shrimp Spaghetti with Lobster Sauce have evolved with every iteration of TATE’s menu, and serve as a marker of sorts for the restaurant’s path to maturity. “These are our classic dishes, but we work on enrichong the ingredients and sharpening the skills that go into making them every year, such as improving the thickness of the sauce in the Hokkaido scallop and citrus dish that is a mainstay on our menu,” she said. 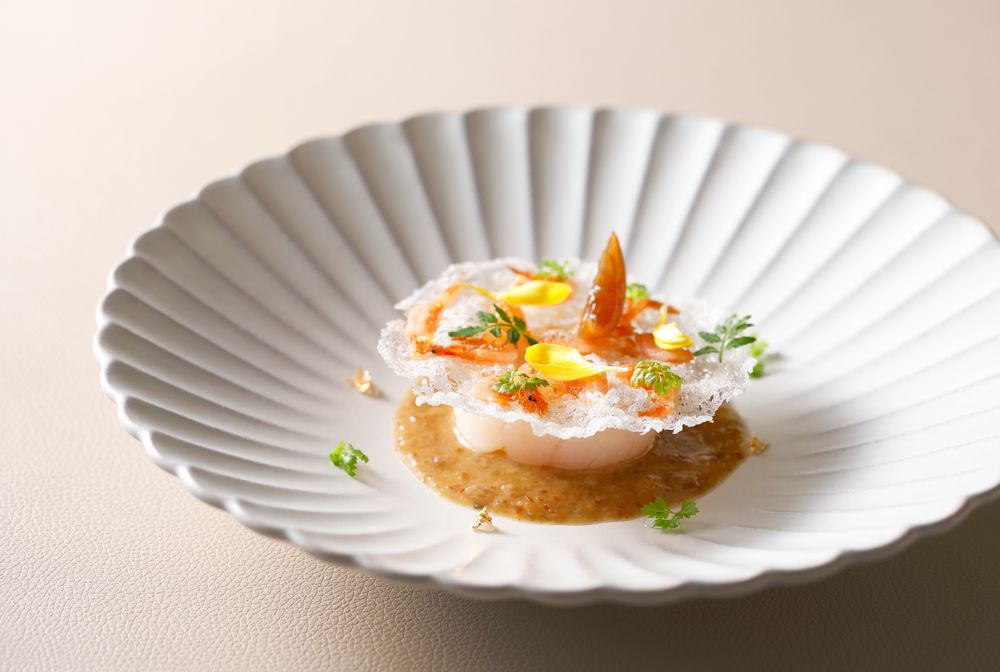 Another classic dish on the menu: Hokkaido Scallop with Citrus sauce.

To celebrate the restaurant’s 10th anniversary this year, Lau has revisited the dishes the team has created since 2012 and incorporated some of them into the restaurant’s new lunch menu, titled Ode to Sauce. 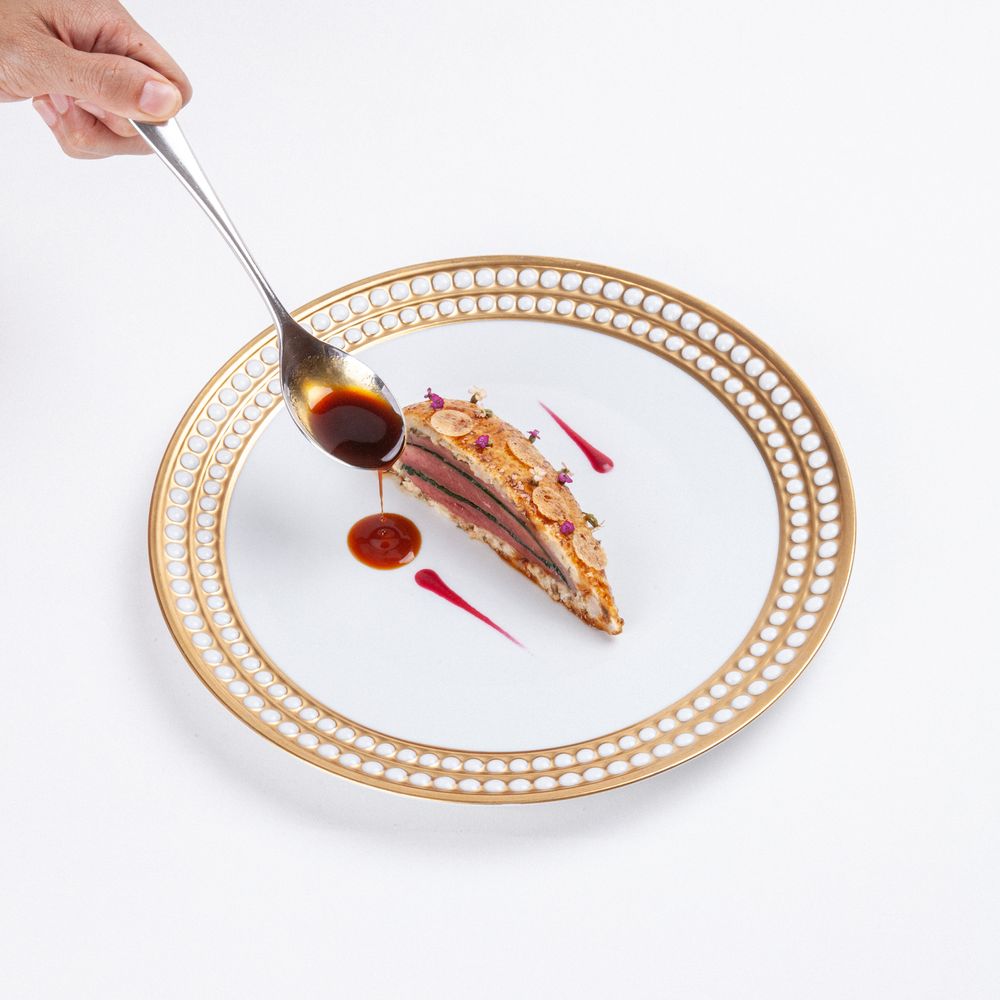 Ode to Pigeon from the Ode to Sauce tasting menu pairs a sauce made from salami with pigeon meat and fermented leaf mustard.

Sauces are the cornerstone for deriving endless delightful creations, says Lau of the direction behind the menu. "I don’t always need to use expensive ingredients such as caviar. Vegetable and tofu can also give you boundless surprises when they are creatively and appropriately cooked,” she says. Earlier this year, Lau opened her second restaurant Mora, a tofu-centric eatery and platform for her to explore the possibility of using more soy products. “I wanted to challenge the imagination of diners and get them to realise that tofu can also be the centre of high-end dining,” Lau adds. She also hopes to promote more local ingredients and classic Chinese cuisine through her menus, as well as push the envelope further on sustainable gastronomy. 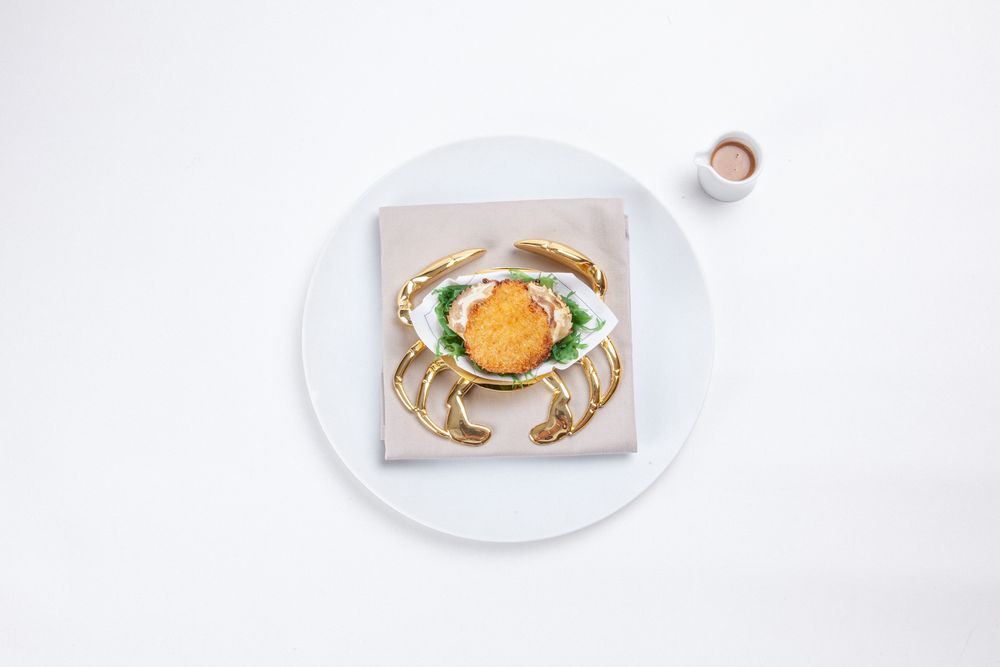 Besides driving TATE’s growth over the last decade, Lau has also watched many of her regulars grow with her. The restaurant’s romantic ambience makes it a great spot for marriage proposals, and Lau has witnessed this milestone moment for many couples who then go on to have their own families, who they bring back to the restaurant to celebrate their special days subsequently. “We have several loyal guests who come back every time we change the menu, and even when we launch new lunch dishes. I am really grateful for their patronage," she says. 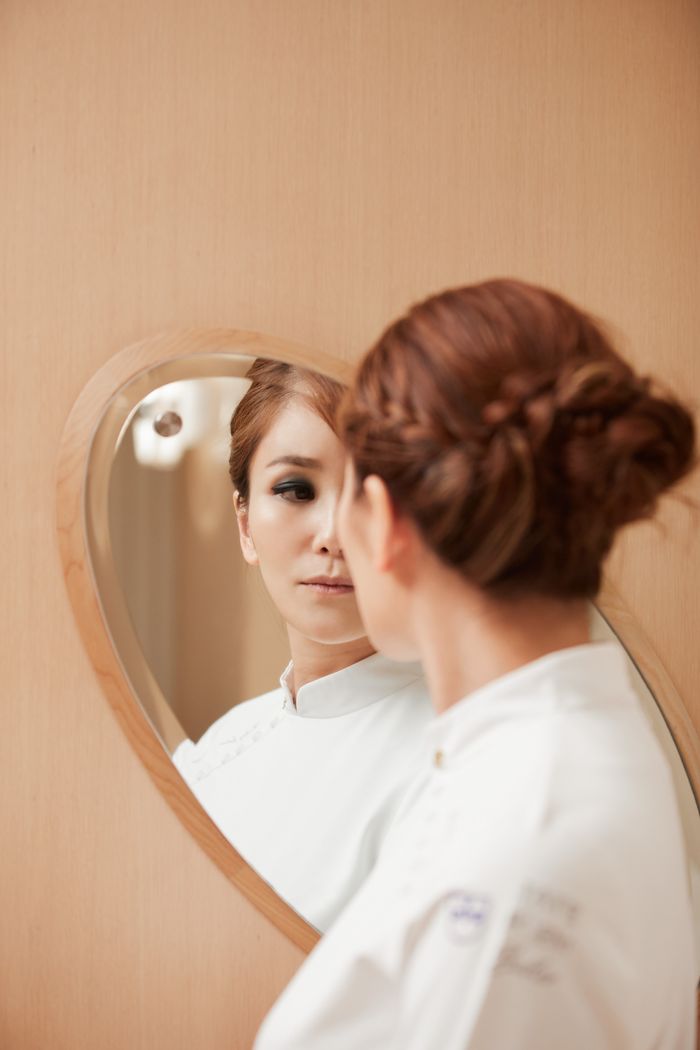 Personally, she has also gained greater sense of identity as a female chef – the biggest evolution for her in these years. “In the past, female chefs were rarely seen and people didn’t have a good understanding of the chef profession. Now, chefs are regarded as pioneers in the creative world and they have an enhanced social status. Many parents have now changed their mind, accepting it as a respectable career path for women,” she says. Her advice to other chefs? 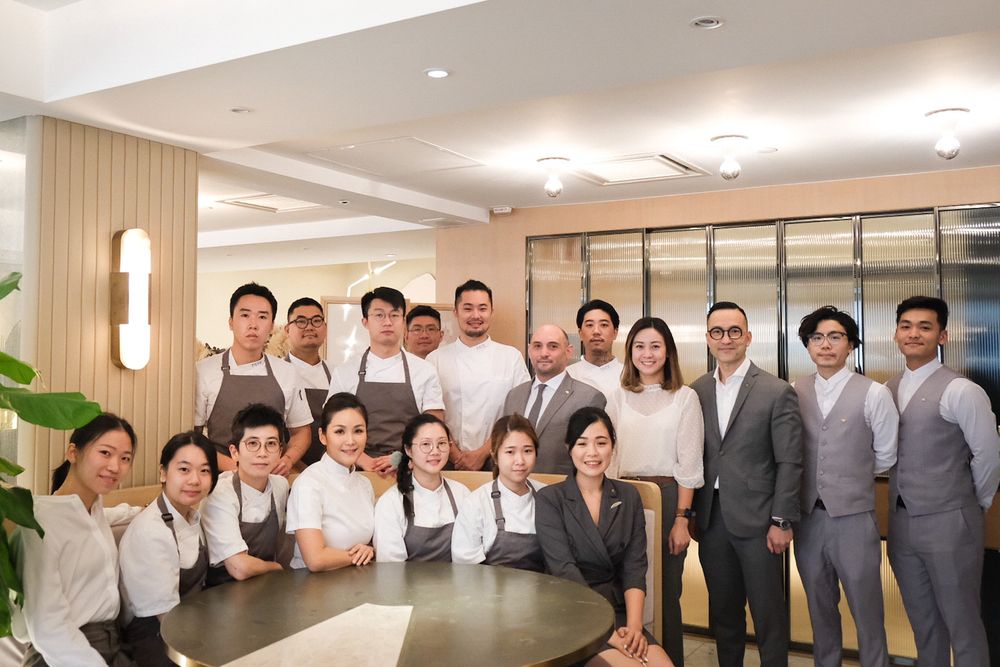 Chef-owner Vicky Lau and the team at Tate.
Photos courtesy of the interviewee.

This post is brought to you in partnership with Citibank