Korea is in the midst of a brutally cold winter. The cutting kal-baram—“knife wind”— of January inevitably brings with it the mid-winter doldrums and a collective yearning for all things warm and comforting.

If you happen to be looking for a restorative and relaxing brew, look no further than saenggang cha or ginger tea, a popular folk medicine in this part of the world with thermogenic properties proven to warm up the body.

One of the oldest and most widely used culinary spices in the world, ginger is a potent natural remedy that has been used for over 5,000 years as a medicinal herb in both traditional Chinese and Ayurvedic healing practices. It is used in all manner of Asian cooking including Korean – in kimchi, in meat marinades, in fish soups and even in traditional sweets.

The distinct pepperiness of ginger comes from gingerols and shogaols, the two active constituents known to improve peripheral circulation that reaches the upper and lower extremities and the surface of the skin. Fact: better circulation means warmer body and warmer body means flexible muscles resilient to winter activity injuries.

Ginger is also used to treat arthritis, muscle aches and pains, cramps, colds, flu, sore throats, asthma, and diabetes. Try the following recipe for fresh ginger syrup; once made, it will keep in the refrigerator for up to three months. Simply add a spoonful to hot water for a warm and comforting brew. With its heady aroma and b yet sweet flavor, it my even uplift and oncoming bad mood. 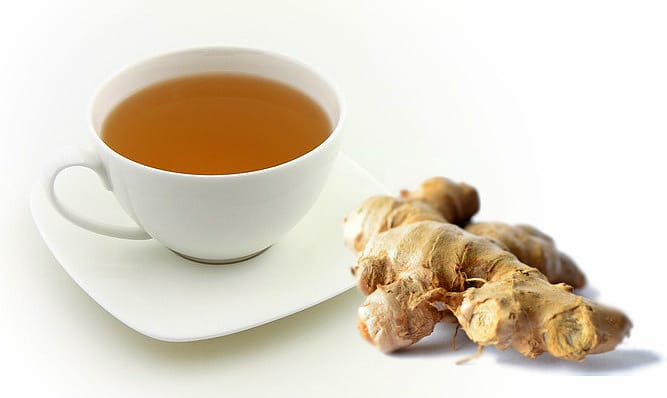 Method
1. Place ginger in a fine mesh bag and rub most of the skin off under running water.
2. Cut ginger into roughly 1-inch pieces.
3. Process ginger in a juicer and let the ginger juice sit for at least two hours, allowing the fine starchy residue to sink to the bottom.
4. Pour just the clear part of the ginger juice into a pot and discard the rest.
5. Add 400 grams of raw sugar to the liquid and allow it to boil while constantly stirring for about 30-40 minutes.
6. Pour the syrup into a sterilized jar. Let it cool. Store in the refrigerator for up to three months.
7. To make tea, add a tablespoon of syrup to hot water (or adjust the ratio according to taste). Serve with a stick of cinnamon in the tea.