When running a restaurant, you have to take into account a multitude of aspects – from sourcing ingredients to managing employee relationships, to taking on challenges in new fields. Chef Kim Tae-yoon of Juban tells us how he keeps all the various things in his kitchen in harmony with each other.

What kind of dishes do you serve in Juban?

It’s been five years since we opened. I was trained in Western cuisine, but personally, I like Middle Eastern and Asian cuisine with their use of various spices. Before I decided to become a chef in my late 20s, I stayed in India for nearly two years and traveled to all around the country. At that age, I didn’t have a lot of money, so I ate the food that the locals ate. That period introduced me to the charm of spices, which led me to become a chef.

I learned cooking in Burj Al Arab in Dubai, where the kitchen was full of chefs from more than 15 countries. Each of these chefs was considered the best chef in their own country, and it was while tasting Indian and Arabic food that my eyes were opened to the true essence of these cuisines. In Korea, my other restaurant Ithaca served Western-style dishes, with a focus on Mediterranean cuisine. However, I also hoped that I would be able to have a space where I could make my favorite casual food, and here at Juban I cook what I want with no restrictions as to types of cuisine. Of course, at Juban we use a wide variety spices, and the food incorporates Middle Eastern and Indian influences.

Read What Our MICHELIN Inspectors Have To Say About Juban

What is Juban’s cooking philosophy?

In addition to good quality ingredients, I also consider the relationship between people. When many people think of good food, they first wonder whether the ingredients are healthy and environmentally friendly. In fact, most of the ingredients used commercially are grown and distributed in a way that is quite disruptive. Producers usually give up on growing a variety of species due to a lack of efficiency and price competitiveness and end up pursuing the mass production of single breeds. Furthermore, the indiscriminate use of pesticides and the factory-style raising of livestock is environmentally problematic, but they are the cheapest and most efficient ways to do so. Distributors are also forced to supply food ingredients that meet a certain common standard due to the prices they are offered and the ease by which they can sell them.

Thus, there was a loss of diversity in the kinds of ingredients being produced, and the ingredients and taste of the food were the same all across the country. It is hard to find truly “regional” food nowadays. When you go to a big city, the same international brands are everywhere, and everything ends up feeling familiar. Similarly, certain trendy ingredients are easily distributed around the world and may make for an extravagant meal, but in this process, regional cuisine has suffered. Things like wild greens and mushrooms, which were common in the past, have become difficult to obtain.

So at Juban, we pay attention to the relationship with the people involved before deciding whether it is an environmentally-friendly ingredient that we can use. It doesn’t make sense if consumers neglect to notice a crop grown with heart or soul, or if diners do not appreciate a chef’s eco-friendly menu. The values shared by producers and cooks should be passed on to consumers in the food. In this process, producers help to preserve the diversity of species, restaurants and chefs can express their philosophy of what good food should be, and consumers can finally experience great cuisine. All of these can coexist in harmony. 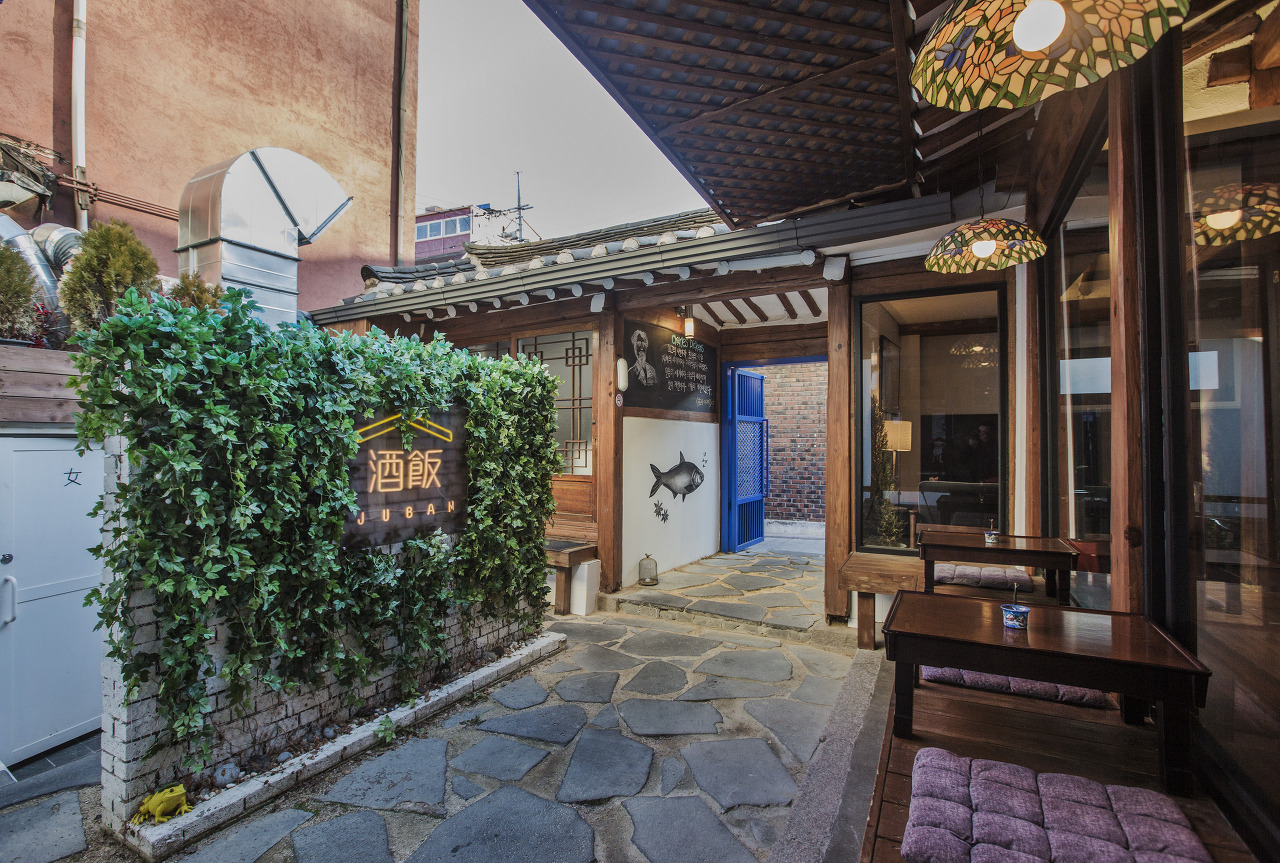 How do you source your ingredients?

If you think about the way markets were a big part of the landscape a long time ago, back then the consumer bought the ingredients that food producers sold directly to the market. But now the distribution network is more developed. Produce, livestock and fish are all mechanically mass-produced, and in this system, their roles and individual uniqueness have diminished. I can buy tomatoes conveniently, but I am disappointed that it has become more difficult to find unique tomatoes with character.

However, if a chef knows a producer directly, then that creates a strong relationship between them, and the meaning of the ingredients then changes. I think a really good dish can come from this difference. The ability to visit farms and ranches in person is a valuable asset, and so I try to visit the producers often. 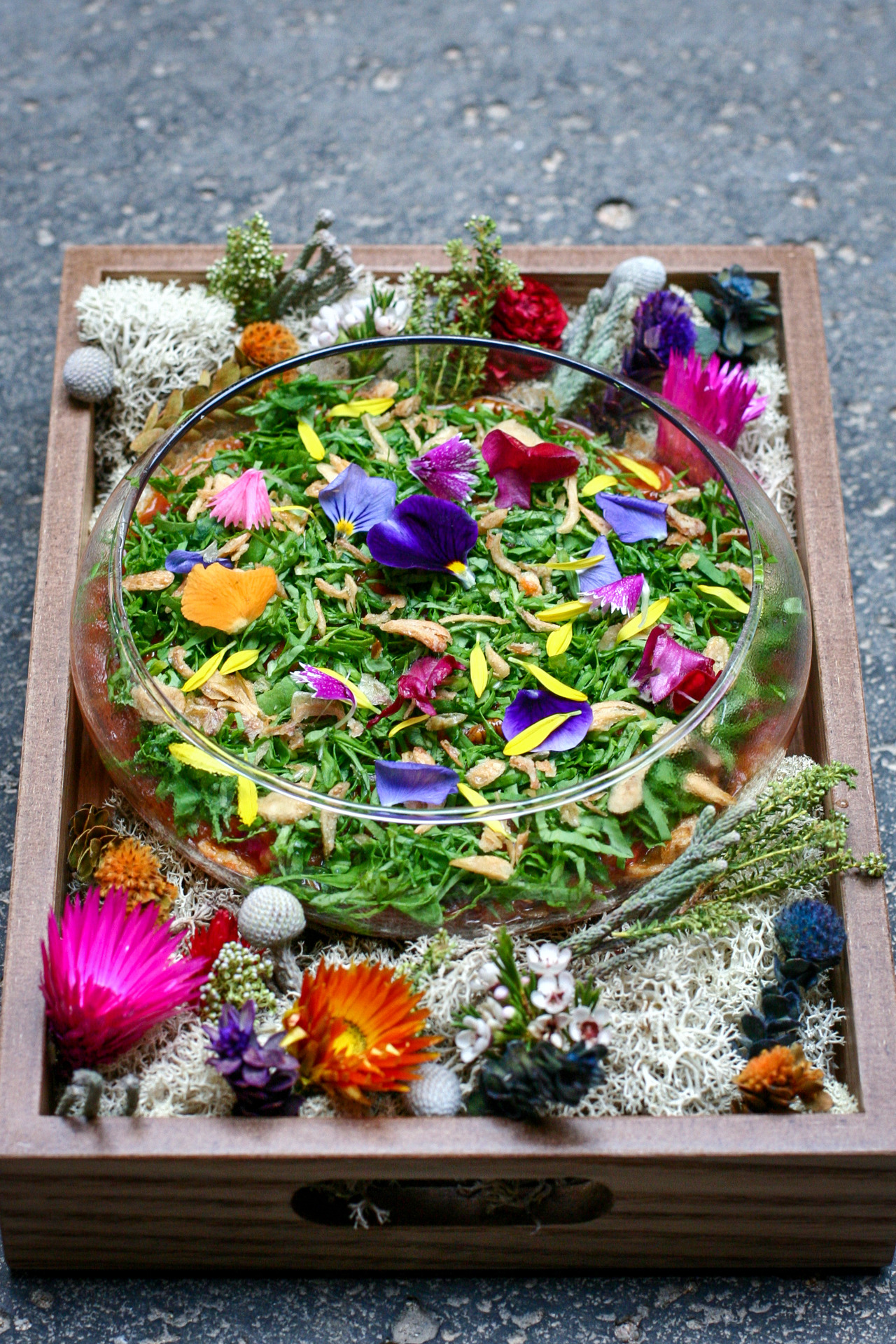 If producers and consumers have the chance to meet face to face, then what role should distributors play?

No consumer can travel around the country and get all their ingredients directly from the producers. But thanks to the advanced distribution network in place, direct trade with producers is now possible, with ingredients reaching consumers in just a few days. What's important is that distributors need to know that they play an important role in the food and restaurant industry.

The distributor is not simply responsible for transporting ingredients. They are the ones who are able to communicate the consumers’ needs to the producers, discover good products, and let the market know about them. Distributors are the ones who influence the mood and price of the market. If they play this role properly, then it will lead a harmonious development of our food culture. 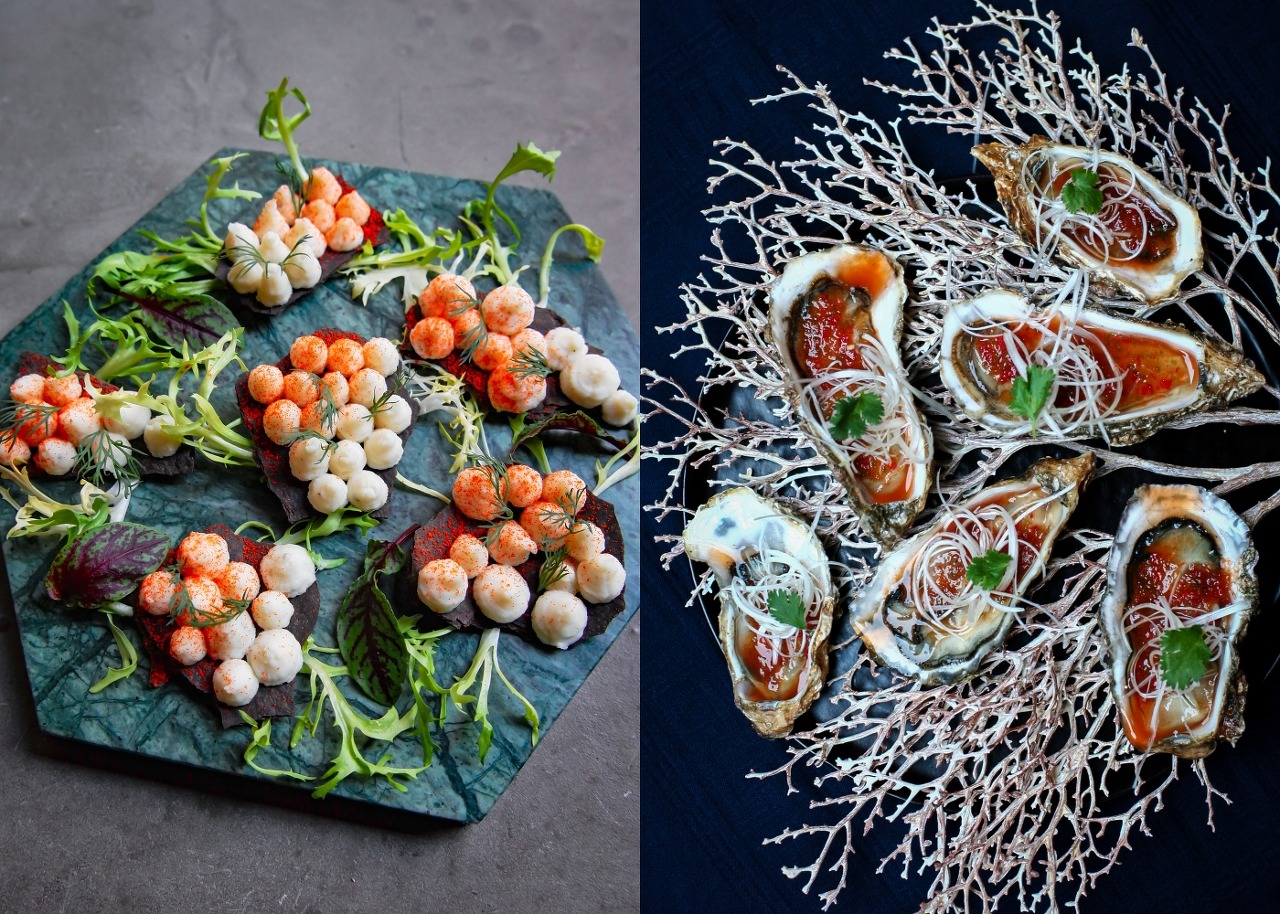 Some of Juban’s dishes, created with environmentally-friendly ingredients (Pic: Juban)

Recently you went on a vegan diet. What was that like?

I was on a vegan diet for the month of July, and as a result I've become healthier. I'm not against eating meat, but I was eating it indiscriminately. After practicing veganism, my digestion improved and I felt much healthier. In Korea, veganism is already an accepted practice for dietary and weight control purposes, but somehow the development of delicious vegan dishes or high-quality vegan ingredients has not changed much. Therefore, the role of professional chefs in vegan cooking is still an incredibly important one.

There are about 1.5 million vegetarians and vegans in Korea, which is about three percent of the total population. In the past ten years alone, the number of vegetarians and vegans have increased 10 times. But with this growing vegan market, there is still not enough good food for them to enjoy. There are currently two vegan menus in our restaurant, and we are testing more menus with the aim to increase this to four vegan menus in the next month. We also have various vegan options in the rest of our menus. 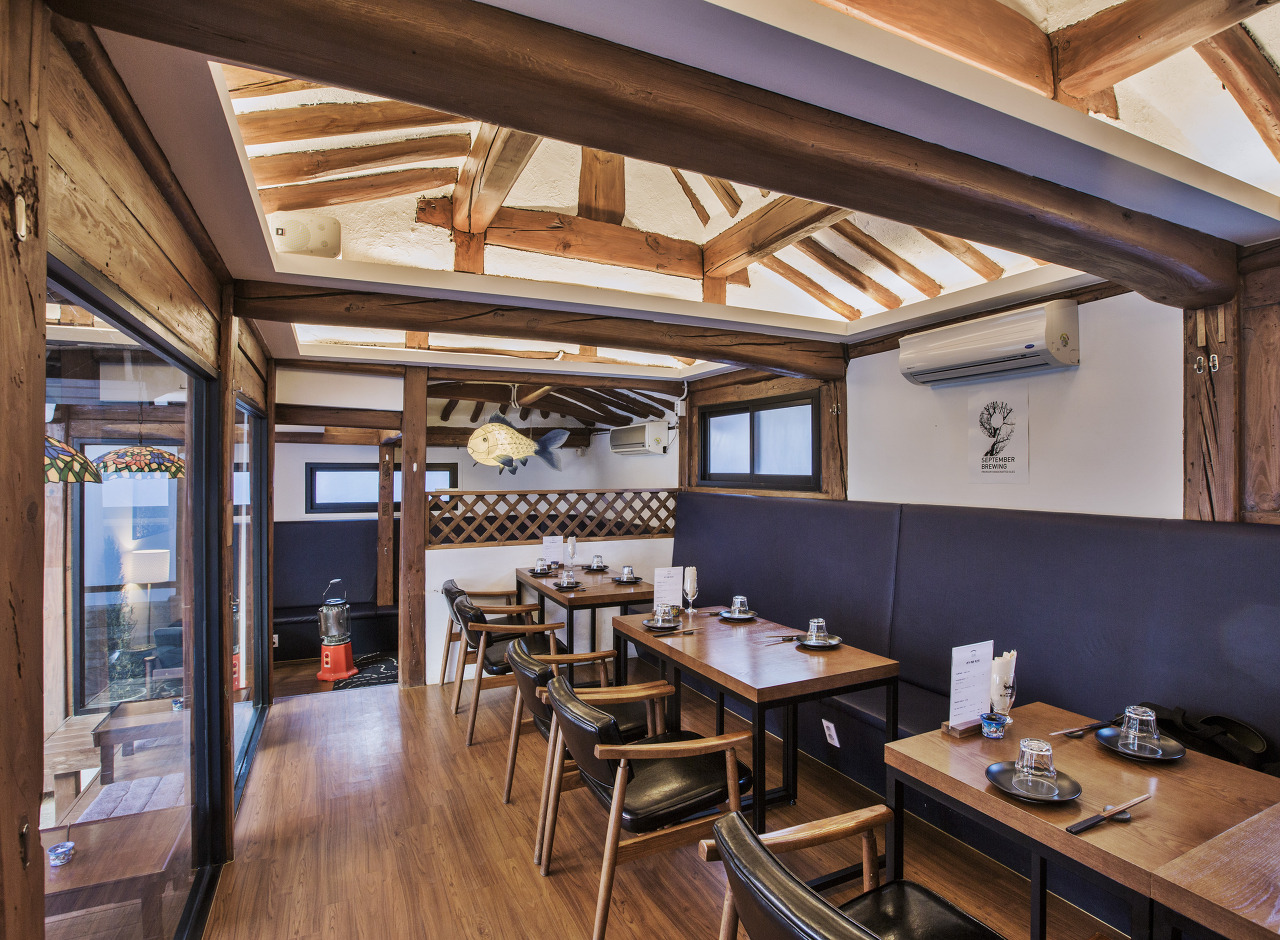 You’ve been running both fine and casual restaurants – is there any difference in how you manage their operations?

The chef-employee relationship should be more autonomous and active when working at a causal restaurant as compared to a fine dining restaurant. We are also trying to make the employee-customer relationship a smooth and comfortable one. In the past, most chefs learned how to work in kitchens with a very strict hierarchy. However, our restaurant focuses on individuality in a free atmosphere. On the surface, it may seem to be less efficient, but I think making food and running restaurants are part of our lives, and having it be fun and flexible is something that I value. That way, we can run the restaurant for a long time.

On any given day you don’t know what is going to happen in the restaurant. Many things can happen, such as sudden requests from customers, or the failure to get ingredients on time. So you have to be more flexible. If you have an organization that is absolutely dependent on hierarchy, then it's difficult to make a quick decision. But if you give each person a lot of autonomy, it may not be a perfect solution, but then a problem can be dealt with immediately. If the way a restaurant is run matches the atmosphere, then customers will have a good impression of it.

What is Juban’s next goal?

We are challenging ourselves to practice environmentalism in more ways. First of all, we will use organic, pesticide-free and local ingredients in various ways. Secondly, we will use biodegradable eco-friendly packaging materials.
Our meals are packaged using a byproduct of straw and sugar cane so that people can dispose of it along with their general waste. That way, it won’t generate any harmful substances even if is incinerated. I think that people will pay more attention to these eco-friendly materials in the future, so we can expect more market demand.
The state of the environment is something that everyone in the food industry should take responsibility for. Going forward, we will continue to explore ways to do this with our team members.