Gomtang Vs. Seolleongtang: A Matter of Technicality

Koreans adore soup. They eat it for breakfast, lunch and dinner – they simply cannot live without it. How many other cultures do you know where serving two different kinds of soup in the course of a single meal is common practice? Should soup be absent from the dinner table for whatever reason, expect Koreans to complain that “something is missing” and that they feel like “they haven’t eaten well.”

Koreans often mix their bowl of rice into the soup and eat them together. There are several theories as to why this rice and soup culture flourished in Korea.

The first theory points to the fact that when families were typically larger back in the old days—hence more mouths to feed—home cooks had to be smart and make the most out of ingredients; soup and rice seemed to be the perfect solution. Another theory is that with frequent attacks by neighboring Japan, Koreans often had to flee their homes, and to efficiently fill their empty stomachs on the road, they would mix cooked rice into a bowl of water and drink the concoction as a meal. Many say this is the origin of Korea’s soup and rice culture.

When temperatures begin to drop noticeably, we start craving rich and hearty comfort foods that warm us to the core. Traditionally eaten with radish kimchi and enhanced with a generous heaping of thinly-sliced fresh green onions, Gomtang and seolleongtang are two of the oldest Korean soul foods that continue to be loved by all generations. Although the two dishes share many similarities, there is a key factor that sets these two soups apart. 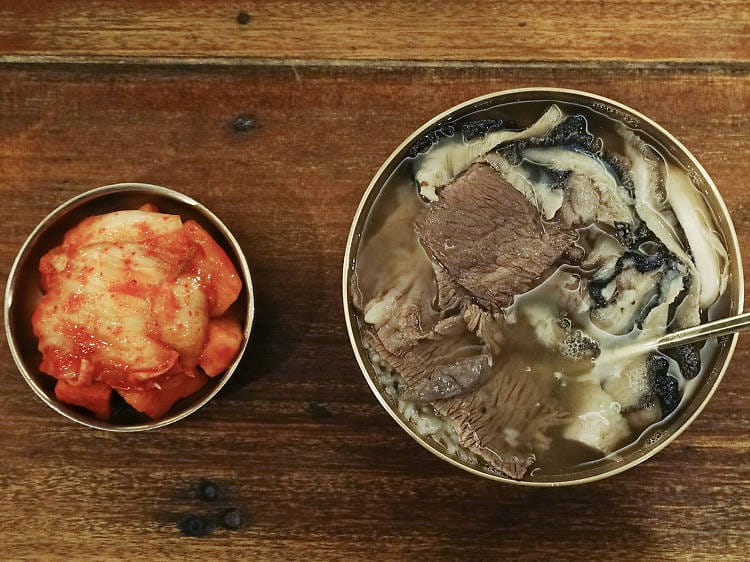 The main difference between gomtang and seolleontang is whether ox bone has been used as a key ingredient. Gomtang is a clear beef soup made by boiling different cuts of beef—typically brisket—while seolleongtang is beef bone soup made by boiling the shank, the head and other scraps of bone of a cow until the broth turns milky white. By-products of a cow such as tripe are added to the broth later for extra flavor and meat. 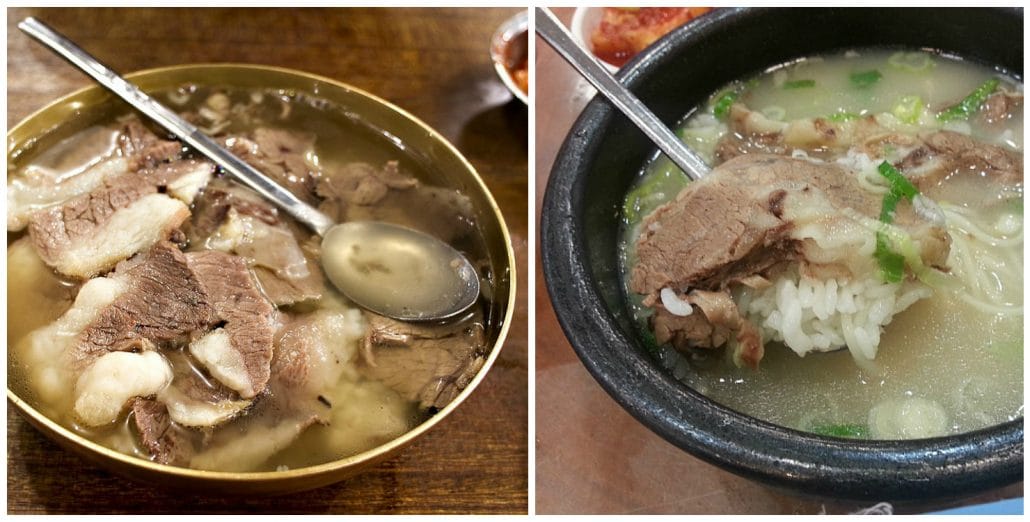 Records from the Joseon Dynasty show that gomtang was a dish enjoyed by the noble class. Highly nutritious and tasty, gomtang was a beloved endurance-boosting dish which commonly made its appearance on the royal table called “surasang” comprising of 12 dishes, including rice and soup, as well as stew, hot pot, kimchi and sauces.

The origin of seolleongtang is highly disputed. The most widely believed story is that it originated from a sacrificial ritual called ‘Seonnongje’ which took place annually in early spring at Seonnongdan, a shrine devoted to holding offerings to the god of agriculture and the god of grains. The king, together with his royal courtiers, would pray for a year of good harvest, enlightening his subjects of the importance of agriculture. Once the ritual was over, the king would order that a cow be killed and boiled into a soup—’seonnongtang’—to be shared among all his subjects who had participated in the day’s event. 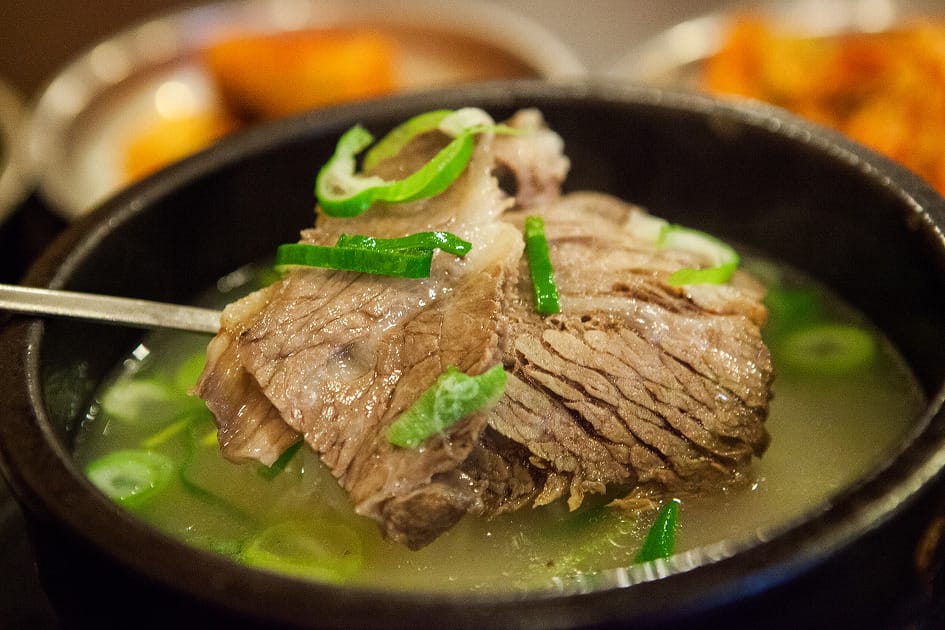 Food scholars, however, refute this theory citing lack of evidence. The widely-accepted theory among food historians is that both seolleongtang and gomtang were brought to Korea by the Mongols.

According to a Mongolian language textbook published during the reign of King Yeongjo(1724 – 1778), the Mongols made huge vats of soup by boiling cow, sheep and goat in water and later seasoned it with salt. This soup dish was presumably invented to feed an army during the war.

During the early Joseon era, slaughtering livestock for meat was a job largely occupied by foreigners from central Asian regions. The by-products of a cow including intestines, tail, head and blood were most likely boiled into a soup to prevent spoilage.

Whatever the actual origin of gomtang and seolleongtang may be, both have been an important part of Korean gastronomy for centuries. 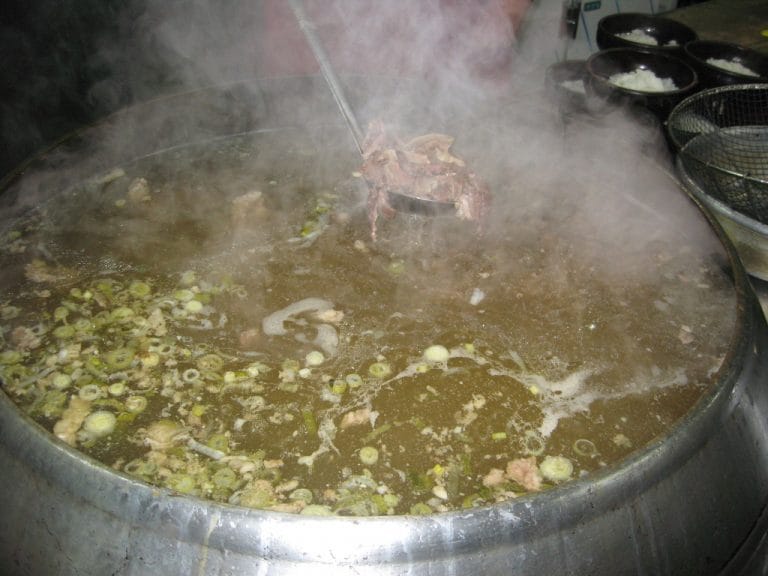 Popular Street Food in the 1930s

Although cattle were raised in ancient Korea, the cow has always been a prized animal as livestock farming was difficult in a land that lacked grassy fields. That changed during the Japanese occupation when cattle farming became more prevalent; beef became cheaper and more common. It was during this time that gomtang and seolleontang restaurants, with their huge hanging cast iron cauldrons, popped up along the Cheonggyecheon stream in the Mugyodong area of Seoul.

Because its primary ingredient is bones, not meat, seolleongtang has always been a cheap peasant food. It is precisely because of its affordability and its rich nutrient content that seolleongtang became such a popular street food in times of scarcity. What is interesting to note is that during the 1930s, seolleongtang was one of the most popular delivery foods. In a novel published in 1929, the author describes a scenery in which a delivery bicycle stacked precariously high with seolleongtang bowls expertly glides through a large mob.

In the meantime, gomtang became popular nationwide after the Korean War. As the popularity of the dish spread throughout the country, different regions produced their own versions of gomtang.

By region, Naju in Jeollanamdo Province, Hyeonpung in Gyeongsangbukdo Province, Masan in Gyeongsamnamdo Province and Haeju in Hwanghaedo (presently North Korea) are each famous for their gomtang. Gyeongsangdo-style gomtang is typically milky white—like seolleongtang– from boiling bones such as beef shank and oxtail for hours before throwing in the meat.

Naju-style gomtang, which can be commonly found in Seoul as well, is quite possibly the most well-known. During the Japanese occupation, there was a cannery in Naju which produced goods that were supplied to the military. Meat from the cow was used to make canned beef while the hide was used to make belts, shoes and bags for the military personnel. Whatever parts of a cow that was deemed inedible were discarded and eventually made their way into the soup pots of local residents. They would boil the by-products for hours and skim the yellow fat that gathered on the surface—the cause of unpleasant gaminess—through the night. The process was labor intensive, but the ensuing broth was highly nutritious and tasty – the birth of the beloved Naju-style gomtang people enjoy today.

When we talk about cool hotels, we’re not talking about hotels where the “cool” kids stay. We’re talking about places that make you say “oh wow, that’s cool!” when you see them. Here are 20 discoveries across Australia from Tablet, the hotel experts at the MICHELIN Guide.