There is a saying in Korean that goes, “Even Geumgangsan Mountain is better appreciated with a full stomach.” The majestic mountain mentioned in this age-old adage is located in North Korea, a natural wonder that has inspired artists and poets alike since ancient times. The mountain, of course, is a metaphor for all things great that have the power to move us – like the sheer drama and excitement that is the Winter Olympic Games, currently underway in South Korea.

With nearly 3,000 athletes from 93 nations competing in 15 sporting disciplines, and with a total of 306 medals up for grabs, the Pyeongchang games is officially the largest Winter Olympics ever to be held. Combined with the members of the organizing staff, sporting personnel, volunteers, and spectators, the sheer volume of people at this year’s Winter Olympics is mind-boggling. Hungry bellies aplenty? You bet! 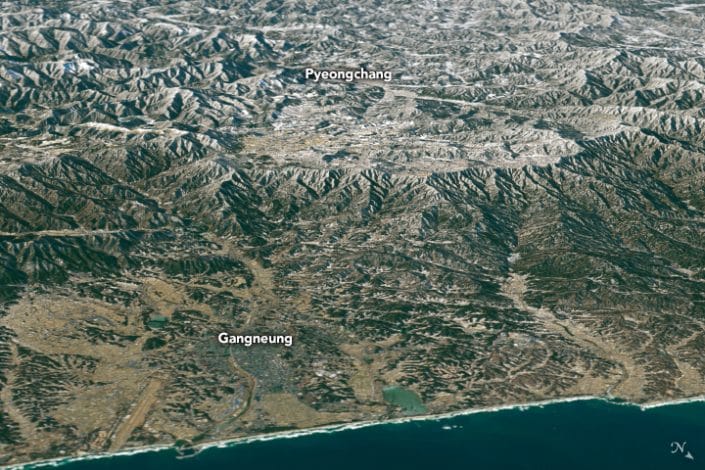 Nestled in the Taebaek Mountains, Pyeongchang, located 180km east of Seoul, is hosting most of the outdoor events, including skiing, sledding, and snowboarding, as well as the opening and closing ceremonies. All of the indoor ice events — hockey, speed skating, curling, figure skating — are taking place in Gangneung, a city that sits on the coastal plain between the Taebaek Mountains and the East Sea.

Besides their panoramic landscape and scenic beauty, these regions offer some of the most memorable local dishes you will come across in Korea. From the freshest seafood to top-grade local beef, and even vegetarian-friendly fare, the following is a checklist of some of the most authentic dishes you need to try when in Gangneung, Jeongseon, and Pyeongchang. 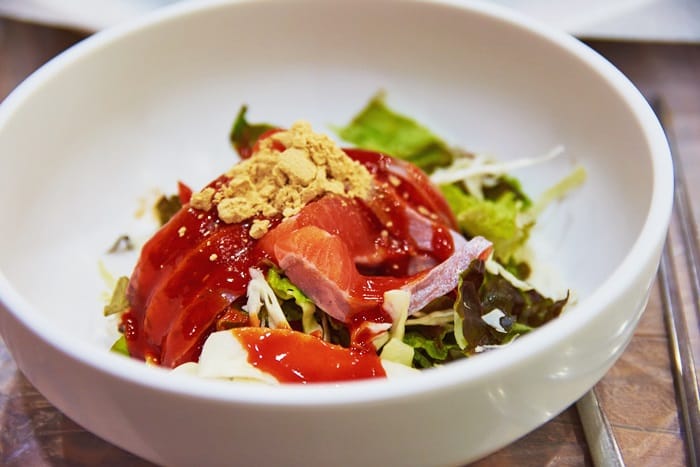 The history of rainbow trout farming in Pyeongchang dates back to the 1960s when Governor Park Kyung-won introduced the fish to this region, famed for its pristine cool waters, from the state of California. Since then, trout farming has become a thriving industry in Pyeongchang.

Although trout are eaten all year round, they are especially prized during the winter months, when their deep orange flesh becomes firmer and supremely rich in flavor. Although rainbow trout can be prepared in a number of different ways, locals prefer to eat the fish raw, in its purest form.

Restaurants in Pyeongchang serve the trout, filleted and sliced, with a side of raw julienned vegetables like cabbage, lettuce, perilla leaves, cucumber, and carrots. The vegetables are mixed together – like a salad – and dressed, to taste, with vinegared gochujang, sesame oil (or perilla oil), minced garlic, and soybean powder. The slices of fish can be eaten as is, dipped in a little soy sauce with wasabi, or eaten together with the salad.

Not a fan of raw fish? Most restaurants offer other options like battered and deep fried trout and grilled trout. Unlike the firm texture of raw trout, cooked trout is soft and delicate with a nutty flavor. 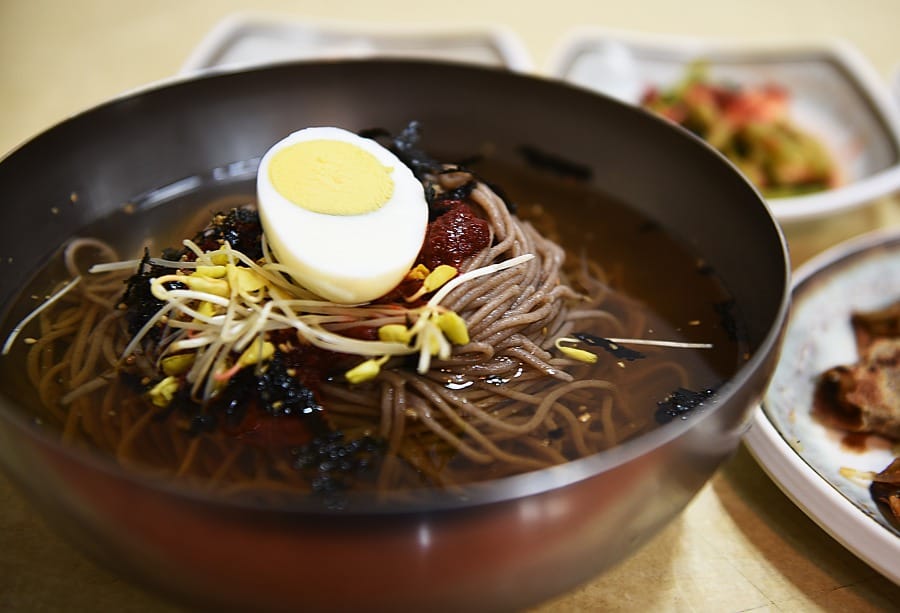 2. Everything Buckwheat (and it’s gluten-free!)

No Korean meal would be complete without a bowl of rice. Rice has been the nation’s preferred grain and an important commodity since the Three Kingdoms Period (AD 184 – 280).

But rice farming is not well-suited for rugged mountain regions with a cool, dry climate like Gangwondo Province. So instead, counties like Pyeongchang, Jeongseon, Yeongwol, and Hongcheon have traditionally turned to crops like buckwheat and potatoes that thrive even in low-fertility soils.

Buckwheat is a remarkably useful crop. The fruit seeds are milled to make noodles, pancakes, dumpling skins, and jelly. The leaves are blanched and seasoned, eaten as a side dish. In the old days, buckwheat stems were used to light fires. The hulls are still used to this day as pillow filling. Every part of the buckwheat can be utilized.

You will find many restaurants in Pyeongchang that serve both cold and hot buckwheat noodle dishes (memil-guksu); savory buckwheat pancakes with vegetables (memil-jeon); buckwheat “crepes” filled with ingredients like kimchi, tofu, meat and sweet-potato noodles (memil-jeonbyeong); buckwheat jelly sliced and served in seafood broth (memil-muksabal); and buckwheat-wrapper dumplings (memil-mandu). Buckwheat dishes are a tasty option for those on a gluten-free diet and many are vegetarian-friendly as well! (Fun fact: Buckwheat, contrary to what the name suggests, is not related to wheat. It belongs to the family of rhubarb and sorrel.) 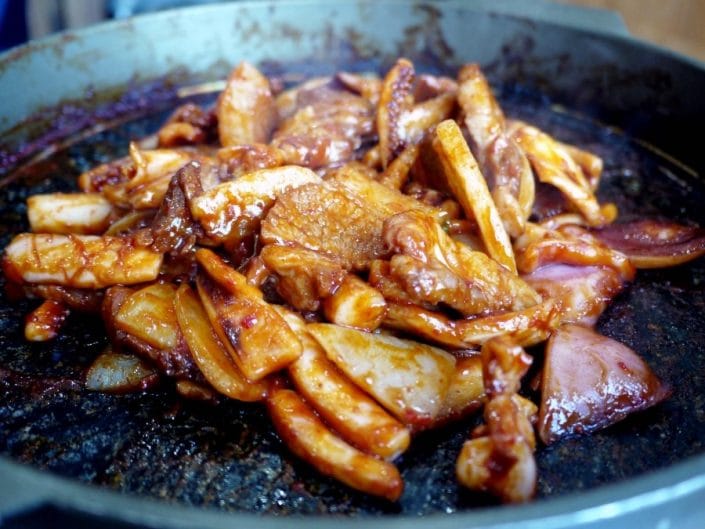 Koreans love pork – especially the sweet and fatty cut that is the belly of the pig. Koreans also love squid, one of the best-known fishery staples of the east coast. A marriage, then, between the two was bound to happen somewhere along the road.

‘Osam,’ is simply a mash-up of the words ‘ojingeo (squid)’ and ‘samgyeopsal (pork belly).’ The word ‘bulgogi’ usually refers to the iconic soy sauce-marinated grilled beef dish, but it can also be used as a generic term to suggest some type of meat that has been grilled – in this case, the meat of the pork and the squid.

What exactly is osam-bulgogi, then? Imagine thin slices of pork belly and bite-sized pieces of squid marinated together in a sweet and spicy gochujang-based sauce laden with garlic. Imagine the pork and the squid sizzling away on a hot griddle. The sauce – initially thinning out as the meats slowly release their juices – slowly reducing and forming a dark caramelized crust around each piece of pork and squid. The beauty of this dish lies in the contrast of flavors and textures between the pork and the squid. The fattiness of the pork belly complements the squid – the former rich and meaty and the latter sweet and bouncy. 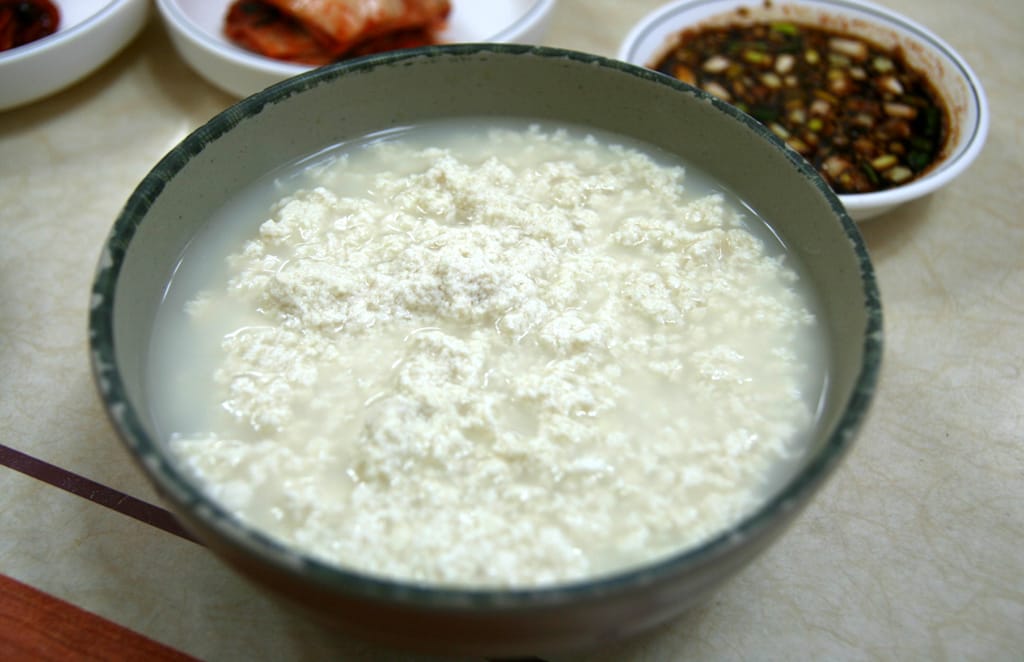 Tofu is probably the last thing you would think to eat when traveling to a coastal city with a reputation for producing some of the best seafood in the country. But when in Gangneung, tofu is something you simply have to try.

‘Chodang’ is the pen name of Heo Yeop, a provincial officer of Samcheok during the reign of Gwanghaegun (1608–1623) who came up with the idea of making tofu with the pristine well water from the office courtyard as well as seawater. People loved his tofu so much they decided to name the it after him.

Unlike most mass-produced tofu, the curds of Chodang sundubu are formed with the addition of natural seawater instead of bittern, a bitter-tasting solution that remains after the evaporation of halite from brines and/or seawater. This one vital difference helps preserve the natural nuttiness of the soybeans as well as render the texture of the tofu remarkably soft and smooth – similar to that of super wet homemade ricotta cheese.

There are around two dozen restaurants within the famed ‘Chodang Sundubu Village’ in Gangneung that specialize in tofu dishes. There is mild sundubu served in its own natural liquid, a spicy version, sundubu stew (best for sharing), as well as a firmer variety of tofu that has been set in a square mold, sliced, and served warm with soy sauce for dipping. 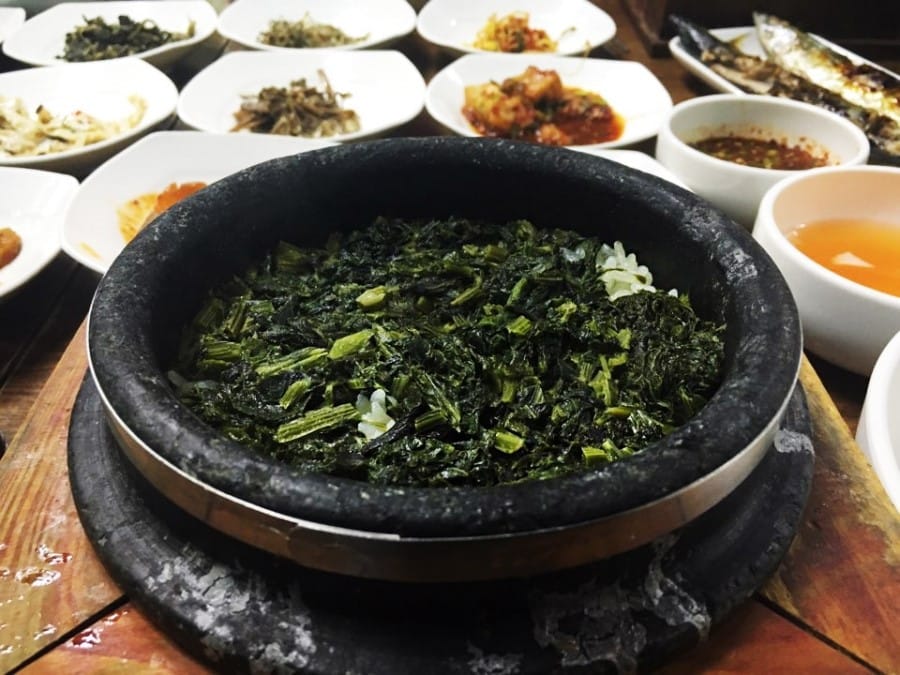 A well-known specialty of Jeongseon County is gondeure-namul-bap, a rustic dish that consists of white rice cooked with a type of leafy mountain vegetable called ‘gondre (also known as Korean thistle).’ It is a simple dish that calls for only three ingredients: rice, water, and thistle. Gondre-namul-bap is prepared with blanched and dried thistle leaves that have been rehydrated and boiled again. The tender leaves are added to the water and rice and cooked together until fragrant.

This humble rice dish was a nutritious staple people turned to when food was scarce. Foraging whatever edible greens they could find deep in the mountains, they discovered this mountain plant which – when cooked – turned out to be tender, fragrant and deliciously nutty.

Many restaurants serve gondre-namul-rice in heavy stone pots, which keep the rice piping hot until the very end. It is often served with a side of sauce – to be drizzled over the rice – made with soy sauce, sesame oil (or perilla oil), green onions, chili powder, minced garlic, sesame seeds and sugar (or green plum syrup). As with any Korean meal, the rice is accompanied by an array of side dishes and soup. 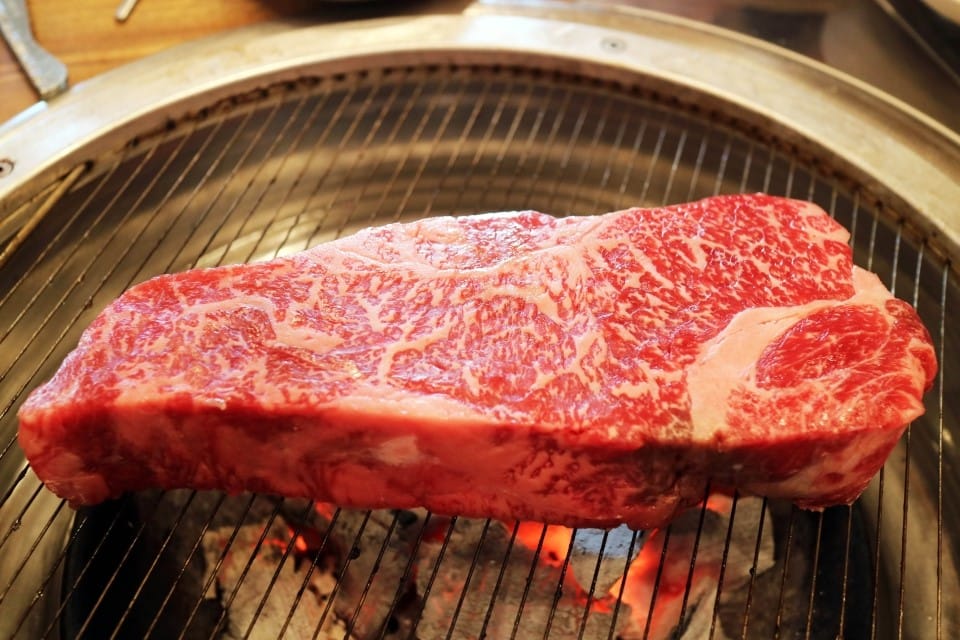 Referred to as “The Asian Alps,” Daegwallyeong is a mountain pass in the Taebaek Mountains between Pyeongchang and Gangneung with an elevation of 830 meters above sea level. This region, which has the coldest annual average temperature in Korea, is home to some of the best beef in Korea.

When you travel through Gangwondo, you will notice that there are a number of establishments that serve as a butcher shop as well as a restaurant. The drill is simple. Choose the cut(s) of beef you want to grill, pay at the cash register, and ask to be seated at a table. For a nominal fee of roughly three dollars per person, the waiters will light up the tableside grill for you with hot charcoal, bring you an assortment of banchan, lettuce greens to wrap the meat in, and dipping sauces. For extra meat, simply head back over to the butcher shop and repeat the drill.

What better way to warm up on a freezing day than an indoor barbecue, grilling some of the tastiest local beef – a stone’s throw from the source? 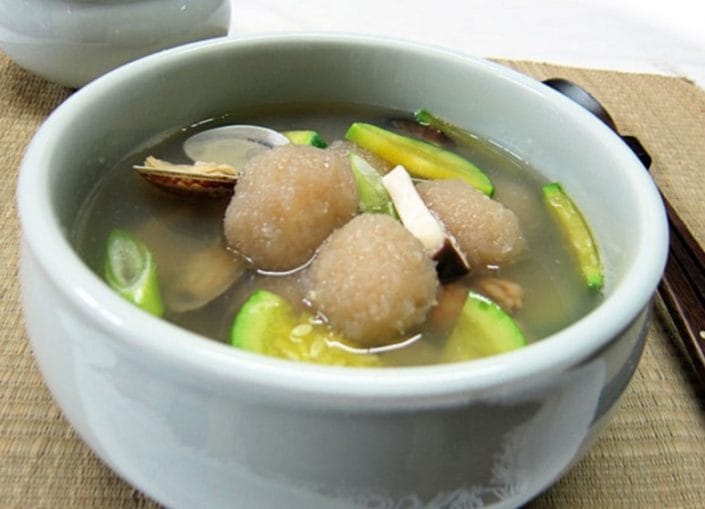 Along with buckwheat, potatoes have traditionally been a staple crop in the mountainous Gangwondo region. Potatoes often replaced rice at mealtimes, especially when rice was scarce. Mothers and grandmothers had to come up with creative recipes to transform the edible tuber into tasty dishes: savory potato pancakes, steamed potato cakes, potato soup, potato rice, braised potatoes, and even potato makgeolli.

One dish, however, stands out as truly unique to this region: gamja-ongsimi (‘small potato dumpings’). Gangwondo residents prepare this potato dumpling soup by first grating the potatoes. The grated potatoes and potato starch are gently kneaded into a dough. The dough is pulled apart into small pieces and rolled by hand into round balls. They are then dropped into a pot of simple broth made by boiling dried anchovies and dried kombu. Thinly sliced zucchini, shiitake mushrooms and green (or red) chili peppers are added to the soup. The dish is garnished with crushed laver, sesame seeds, green onions, and julienned egg crepe.

These starchy dumplings have a unique texture – unctuously soft and smooth on the tongue and gloriously gooey. It is a hearty dish, supremely comforting eaten on cold winter days.