The dark-coloured broth is boiling in a deep pot. As white steam pours out, it transmits it heat and and intoxicating aromas to the surrounding area. Hsiao Wang Steamed Minced Pork With Pickles In Broth is one of the new Bib Gourmand entrants in The MICHELIN Guide Taipei 2019 Selection. Wang Chieh-Shen, the owner of this bustling stall at the Huaxi Street Night Market, stands by the side of the stove, kneading pork paste into strips and dropping them into the broth. 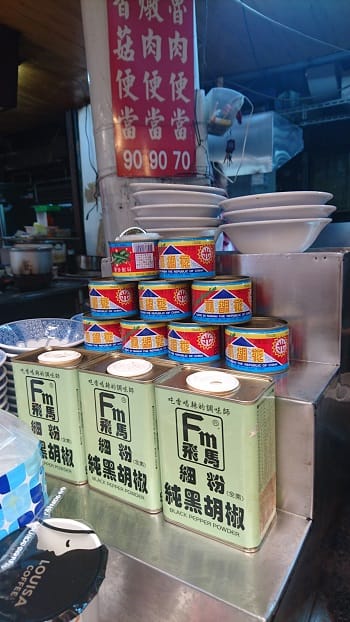 “Making it and cooking it on-site makes it more delicious,” he says. Hsiao Wang’s steamed minced pork is distinctive from the ones you find anywhere else. Every day, he orders 45 catties (27kg) of pig's hind leg and the supplier would help to cut the meat to size.

At the shop, the staff seasons the pork with soya sauce, pepper, salt, fried garlic, fish surimi and sweet potato starch before letting it marinate overnight. The chunky pieces of pork give the strips a more robust mouthfeel than its usually starchy counterparts.

Prepared one day before it is served, the broth is another secret weapon: they first make a flavourful stock by boiling pork bones and rock sugar for four hours. Then pickled cucumber is added to underscore the umami of the liquid. Wang uses the pickled cucumber produced by a brand with a longstanding history. It comes in tin cans, which he stacks at the side of his stall.

“This one is salty. A lot of canned pickled cucumbers on the market now are sweet. But only the salty ones are suitable to make the broth,” he says. When everything is ready to go, he puts the pork strips into the bowl and pours the broth inside.

Wang recommends his guests to sprinkle a bit of black pepper — sourced from another esteemed local brand named Flying Horse — to enhance the fragrance. Pepper of such high quality is costly and a box is priced at NT$270 to NT$280. Hsiao Wang buys 30 boxes in every order and that already costs NT$7,000 to NT$8,000.

The unique steamed minced pork recipe was invented 37 years ago when Wang’s father established the shop. An earlier iteration of the dish goes one generation back to his grandfather, who sold Japanese food also at the Huaxi Street Night Market. Wang told us the people at that time liked to have pickled cucumber chicken soup at roadside banquets. “My grandfather said chicken was bonier, which made it hard for kids to eat, so he used pork instead.”

That is how the famed steamed minced pork in broth slowly took shape. As a child of seven or eight, Wang sometimes helped out to wash dishes at the stall. About 10 years ago, he took over the business from his father. 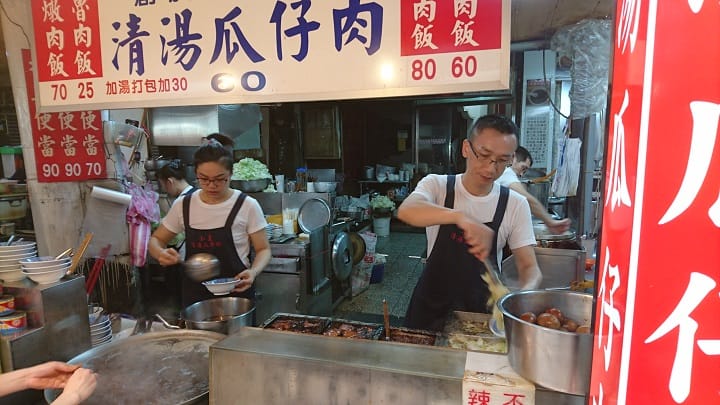 Wang is the second-generation owner of Hsiao Wang, making steamed minced pork in broth just like how his father did.

Wang admits that prep is the most challenging part of his work. Take another signature dish of his shop, steamed rice with 'black gold' pork sauce, as an example. This dish takes six to eight hours every day to braise the meat, so that it develops deep flavours and takes on a dark shade.

Every day, Wang arrives at the shop an hour before his staff. The most vital steps of cooking, such as marinating and braising the meat, are still done personally by him.

“I can’t hand it off yet. Though I hired someone to help, I don’t feel fully comfortable,” he says.

Regarding expansion plans, a second location is out of his consideration, despite the thriving business and large number of foreign patrons. 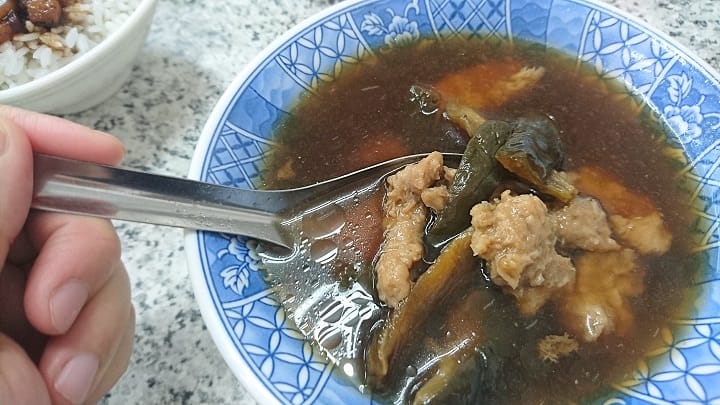 “This is the kind of shop that you need to do everything yourself. Just one is enough to keep you busy,” he explains, stressing that the quality of production is the first priority. When asked about the Bib Gourmand recognition, Wang laughs and admits they did not see this coming.  “We were very happy, but also very surprised,” he says. “But we will work harder to be better.”

Hong Kong Behind The Bib Bib Gourmand
Dining Out 4 minutes

Australian Behind The Bib bistro
Dining Out 3 minutes