One of the hottest names on the New York dining scene, Korean fine-dining restaurant Atomix will mark its first-year anniversary with a debut cooking collaboration in Hong Kong. The innovative restaurant, which received a Michelin star less than a year after it opened last May, will team up with chef Vicky Lau of one-Michelin-starred French-Chinese restaurant Tate Dining Room in Hong Kong for a two-day event on 28 and 29 May.

Atomix, which is helmed by husband-and-wife duo Junghyun “JP” Park and Jeongeun “Ellia” Park, has created a splash in the New York dining scene with its distinctive style of haute Korean cuisine that fuses their native Korean roots with a contemporary touch.

Chef Junghyun Park says: “If we were to leave one impression on the Hong Kong diners, we want to communicate through our cuisine that Atomix is a restaurant that is deeply concerned with the "next step" of Korean cuisine.”

Atomix contains the word, "ato" which comes from the ancient Korean word for “gift”. It forms the base name of the two restaurants that are run by the Parks in New York City. In 2016, they opened Atoboy, a casual progressive Korean restaurant in Manhattan that puts the spotlight on banchan (small Korean side dishes) and infusing French culinary techniques in Korean dishes.

Spurred on by its success, the couple opened Atomix, which is a more refined version of their culinary vision last May. Before opening Atoboy, chef Park honed his craft in Michelin-starred restaurants such as The Ledbury in London and Jungsik in his home city of Seoul.

He will be presenting some dishes from Atomix such as Gim Bugak (fried Korean seaweed chips) with mumallaengi rice and smoked trout roe, Hanwoo Striploin with Fermented Fruit Sauce, Dashima and Wasabi Leaf, and Makgeolli Ice Cream with Chinese black tea syrup, Korean pear and sumac meringue. One of Tate’s favourite dishes that features Chinese yam will be infused with soy dashi and cheese from Atomix. Lau will also present dishes such as Blue Lobster Tofu with scallion ginger sauce, pineapple, vin jaune and shaoxing wine. Another collaborative dish is the Crispy Tilefish — Lau will use local clams, while Park will make a fermented sauce for the dish.

He says: “We hope that diners can better understand the history of not only the dishes, but also Atomix's culture and philosophy, and hopefully Korean cuisine culture at large as well.”

RELATED: Behind the Bib: Atoboy 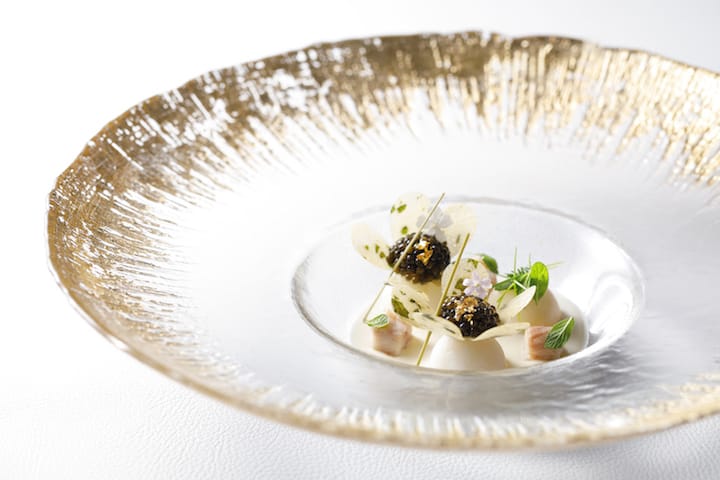 One of the signature dishes at Tate Dining Room is Ode to Chinese Yam, which will be given an Atomix makeover. (Photo: Tate Dining Room)
1. What do you think about four-hands collaborations in general?

Lau: Four-hands collaborations are a great opportunity to learn, not only about cuisine and ingredients, but also the teamwork and organisation of my kitchen. It is also a good break from the daily routine for everyone in the kitchen, to step back and absorb valuable in-depth cultural experiences that you may not experience as a tourist.

I think the most important element of these collaborations is the flow of the menu. It is crucial to pay attention to the overall menu experience rather than just putting out signature dishes of the two chefs. The overall experience from food, service and wine has to be carefully thought through.

Park: It is important for each restaurant to have its own culture and identity, but I also believe that it is critical to always learn with an open mind. With collaboration events, it is a great way to immerse and learn about different chefs, their cuisines, their restaurants' cultures. These are opportunities to reflect on our restaurants, their cultures, and how we want to move forward.

2. How do you usually select your four-hands partner?

Lau: We usually select partners who have the same philosophy in order to have the best synergy. As for cuisine, it can sometimes be very interesting to have different styles of food but the cuisines of both chefs must have similar basic elements in order to create a good menu experience.

3. What do you think about your four-hands partner this time?

Lau: Chef Park’s cuisine is lively, filled with ideas and flavours, which are backed by his own roots. I respect this aspect of his cuisine a lot and strive to be like this every day. We both try to have our own take on cuisine that has a long history; his Korean and mine Chinese, I like his harmony and bold flavours. Atomix is a very warm, contemporary and detailed restaurant, which is very similar to Tate’s philosophy.

Park: It is our first time visiting Hong Kong, so Tate is a restaurant unlike other collaboration partners in that we have never tried its food ourselves or met chef Vicky. But we're well aware of its reputation and cuisine from discovering it through well-respected platforms. We've kept our eyes open for its work since then. We love that the chef is trying new concepts and techniques based on her evident respect for Chinese cuisine and tradition. This similarity in philosophical style is why we believed that Tate and Atomix would be a good fit.

4. What can diners can expect from this four-hands menu?

Lau: Other than some of our signature dishes, we will have two collaboration dishes on the menu. Tate’s yam dish will have a new take with Atomix’s soy dashi and fresh cheese. Another collaborative dish will be the Crispy Tilefish, in which I will use local clams and Park will make a fermented sauce to go with it.

Park: Atomix has only been open for close to a year, so many Hong Kong diners may be unfamiliar with us. With this collaboration event, we want to showcase many flavours, ingredients, and techniques that may be a new experience for diners who are joining us. While we are showcasing our signature dishes, we are also developing new dishes in collaboration with chef Vicky that will be unique to this pop-up menu.

5. What is one tip for guests to enjoy this four-hands collaboration to the fullest?

Lau: I hope guests will come with an open mind to enjoy and experience the various cooking techniques from chef Park and I, and appreciate how the dishes have been specially curated for this event.

Park: We hope our guests will read the stories that we've carefully and thoughtfully prepared. They can better understand the history of not only the dish, but also Atomix's culture and philosophy, and hopefully Korean cuisine and culture at large as well. We also hope that it will help more clearly tell the story of how and why Atomix and Tate came together, in food and culture, for this event.