Hansik Goo was one of the most highly anticipated openings in Hong Kong last year. Despite the pandemic, this newcomer to the Hong Kong restaurant scene quickly became the talk of the town, thanks to its acclaimed Korean chef-owner, Mingoo Kang, who is known for the success of his two-MICHELIN-starred restaurant, Mingles, in Seoul.

Kang’s first overseas outpost impressed not only the city’s gourmands, but also the MICHELIN inspectors, who recognised Hansik Goo as a MICHELIN Plate restaurant in the MICHELIN Guide Hong Kong Macau 2021, just seven months after its opening.

After one year of operations, Hansik Goo made an announcement to relocate from Lyndhurst Terrace to The Wellington, with an updated look inspired by bu-eok, or the traditional Korean kitchen, and a deepened commitment to introduce hansik (meaning “Korean cuisine” in Korean) to Hong Kong diners.

With the new location, Kang will continue to spotlight the culinary traditions of his country through more refined creations and service, with the support of an upgraded kitchen and a new team of Korean culinary talents.


During the soft opening of Hansik Goo 2.0, Kang, who just finished a three-week quarantine in Hong Kong, sat down with the MICHELIN Guide to share his vision for the restaurant, his impression of the city, and plans for the future. 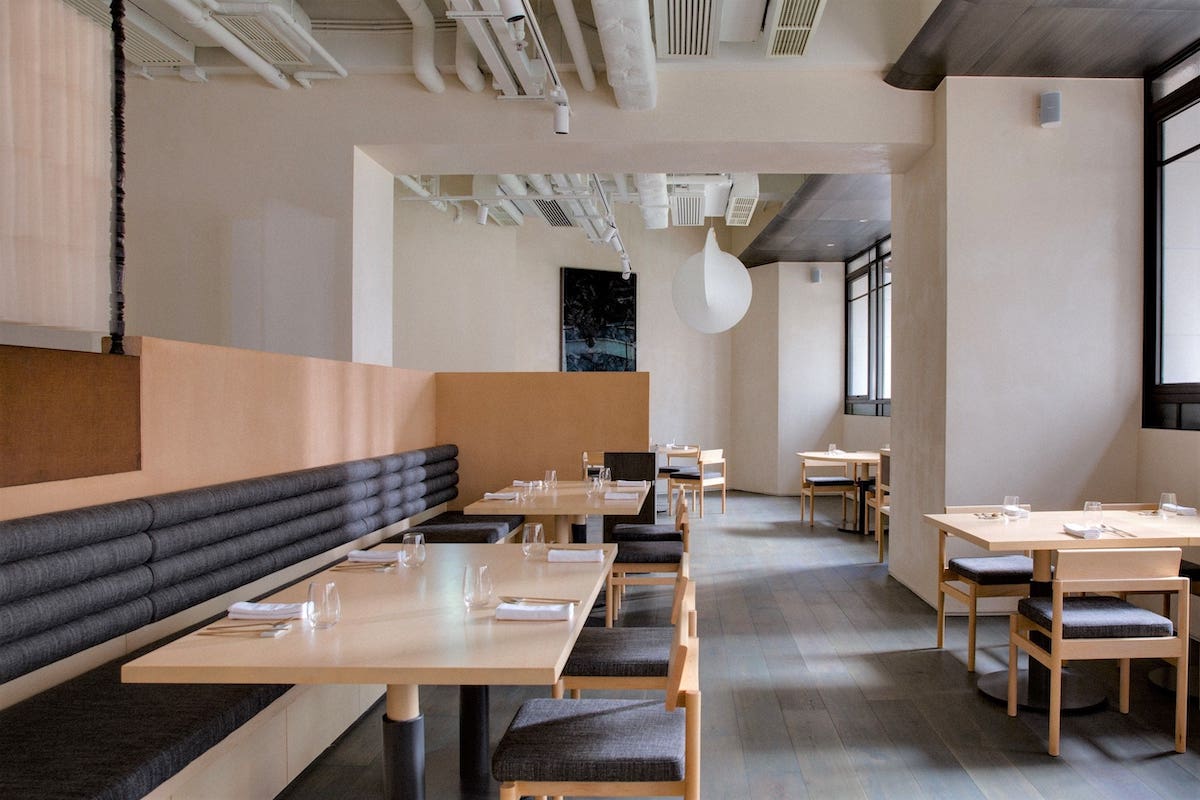 The interior design of Hansik Goo 2.0 was inspired by bu-eok, or the traditional Korean kitchen. (Photo: Courtesy of Hansik Goo)

What's the purpose of your visit this time?

To begin with, I need to be here for the taste adjustment. Although most of my kitchen team were transferred from Korea and have worked alongside me, there is a certain standard I have developed from running Mingles in the past eight years. So it is necessary for me to be here and fine-tune the taste of each dish for the reopening.

Hansik is a relatively new concept in Hong Kong, and diners here are eager to learn and experience a different aspect of Korean cuisine, so I would like to take this opportunity to introduce an authentic and genuine taste of hansik.On the operations side, we have a team of Hong Kong chefs and the kitchen space is brand new, so I need to monitor the flow of the operations, which directly affects the quality of our dishes.

Any challenges of managing a team remotely from Korea?

The team at Hansik Goo can operate without me and maintain high standards. We are in the 21st century so we have access to effective communication tools. Back in Korea, in the corner of Mingles I would create cooking videos for the Hong Kong team, and we have Zoom meetings at least once or twice a week.

When I came back to Hong Kong, I was pleasantly surprised that the kitchen team has met my expectation of the recipes that I asked them to follow, the taste is 80 to 90 percent there. The head of Hansik Goo’s kitchen is very good at managing the team, the sous chef used to work with me at Mingles so they both know what the taste standard should be. 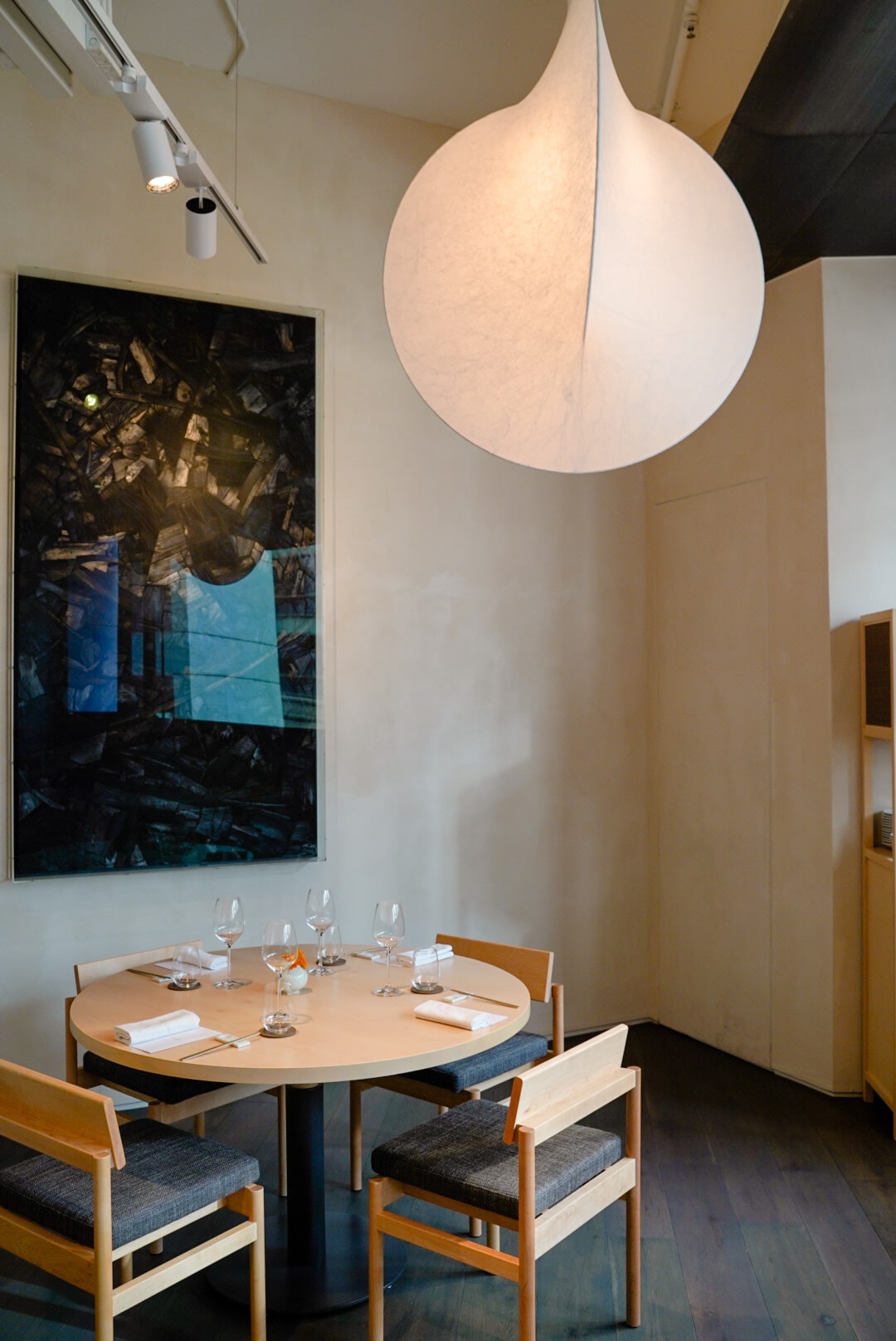 What’s the reason for the move?

From running Hansik Goo in the previous location, I learned that it is one of our missions to give diners more cultural context to our cuisine. That’s why we decided to move to the new location at an early stage. When I first decided to open Hansik Goo in Hong Kong, I thought we could focus more on the food itself. But slowly, I started to realise we could have done more accurate communications around the dishes, space and location.

Another reason is that the original concept of Hansik Goo was casual dining, but the expectations from Hong Kong diners were a bit different as we were regarded as Hong Kong’s first Korean fine dining restaurant. To make sure we meet expectations this time, I have decided to be directly involved in every detail, even the interior design and artwork.

I was surprised when people called us a fine dining restaurant last year. When compared to other Korean restaurants in Hong Kong, our previous location was more refined and luxurious, but it was a surprise to me that people accepted our presentation as fine dining. If I knew this in advance, I would have adjusted our presentation and other details, but it was too late as the location and interior design was fixed. That’s why we wanted to present a whole new experience.

“With Hansik Goo, the focus is on how to present hansik to overseas diners, so we can accurately and authentically express the essence of Korean cuisine.” 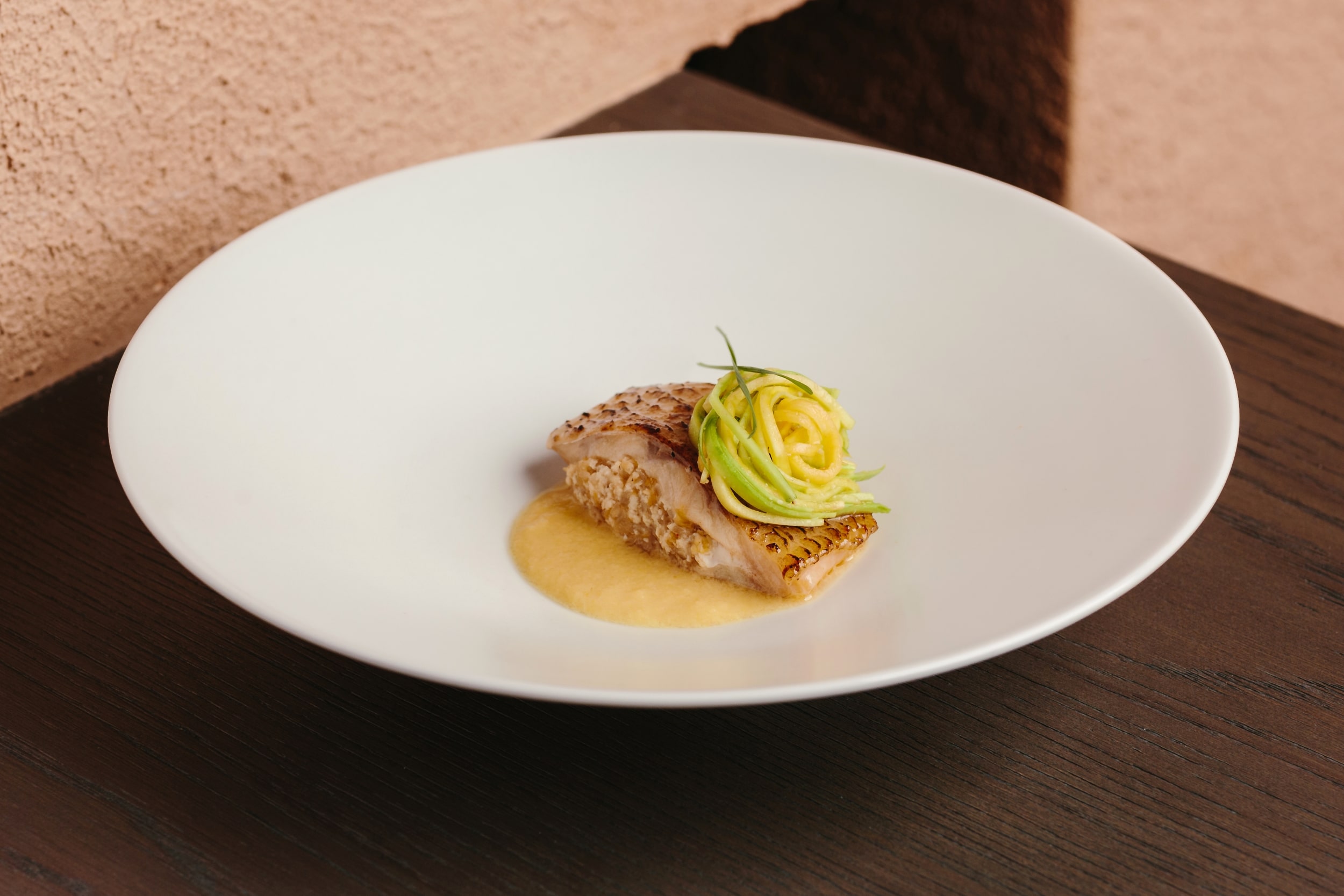 What’s something about hansik that people outside of Korea may not know about?

The menu of Hansik Goo consists of two categories. First, we offer dishes that people outside of Korea may already be familiar with, like Korean fried chicken (also affectionately known as “KFC”) and tteokbokki.

On top of that, I want to express the essence of Korean cuisine like fermented food and the three jangs (fermented Korean sauces), including ganjang (soy sauce), doen jang (soy bean paste), and gochujang (Korean chilli paste). We combine seasonal seafood with these vegetable fermentation, which is a strong characteristic of Korean cuisine and an important part of Hansik Goo. Our cuisine is also inspired by popular Korean street food and royal cuisine.

Will people find similarities between Mingles and Hansik Goo?

Both restaurants share the same root, which is Korean cuisine. But Mingles is like my own playground with Korean cuisine as the foundation. With Hansik Goo, the focus is on how to present hansik to overseas diners, so we can accurately and authentically express the essence of Korean cuisine.

But that does not mean we can’t be creative with hansik. In fact, through the process of developing the menu for Hansik Goo, I realised that there is a lot to discover in traditional Korean cuisine.

Mingles and Hansik Goo are initially two totally different concepts. Hansik Goo does casual dining, while Mingles does fine dining. But with the relocation of Hansik Goo, we are aiming to show a more refined concept so we will get a bit closer to Mingles’ level.

For example, you will find European elements like olive oil in Mingles’ fish mandu dish. But Hansik Goo's version uses sesame oil in order to keep the traditional and authentic way of hansik.

In the MICHELIN Guide Seoul, Mingles is listed in the contemporary section, but for Hansik Goo, we were the first to be recognised in the Korean category in Hong Kong. I was impressed by the way the MICHELIN inspectors classify our cuisines and their understanding of my intention. 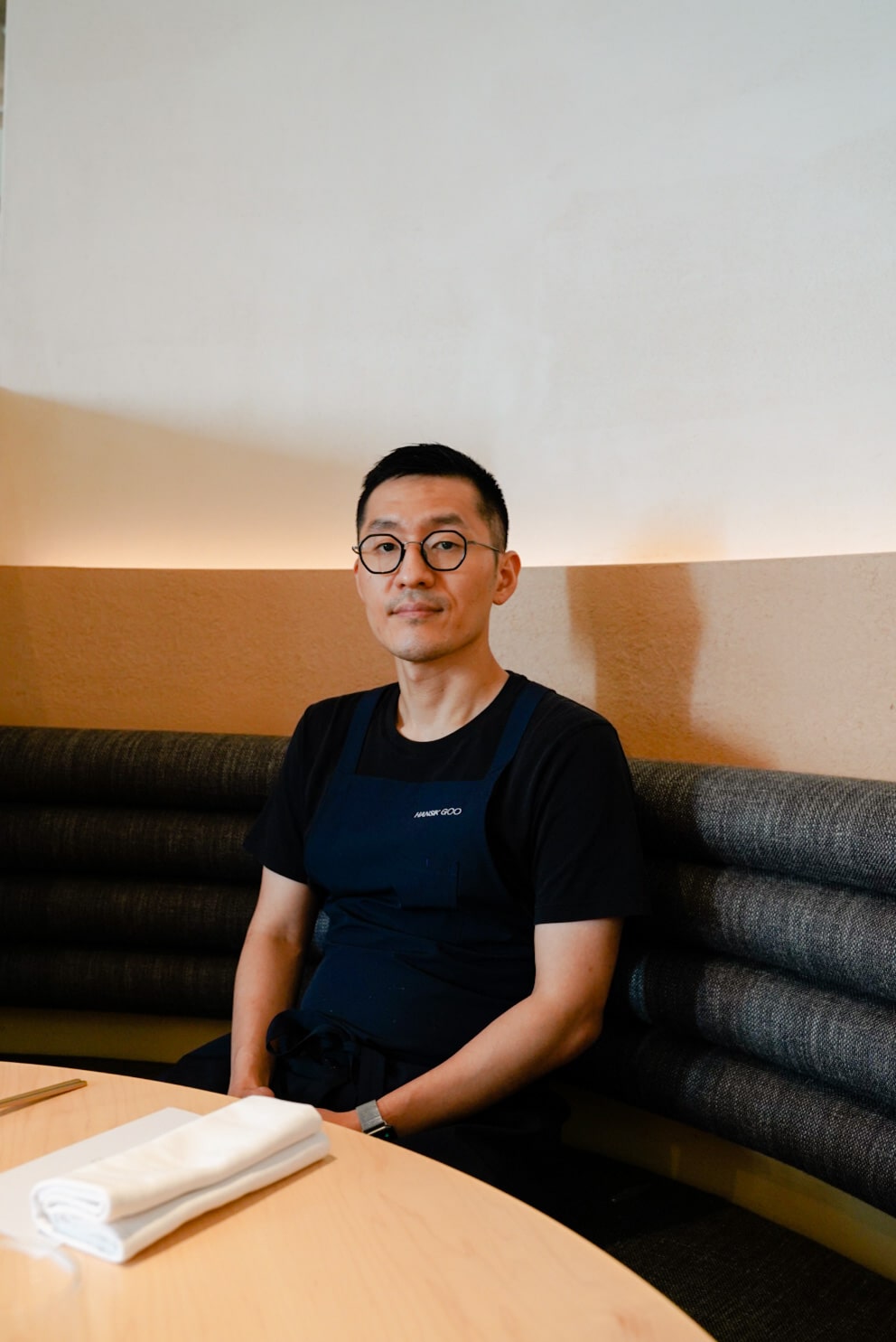 What's your impression of the Hong Kong restaurant scene?

Before the pandemic, I visited Hong Kong several times and dined at restaurants like Belon, Amber, VEA and Yardbird. What surprised me the most was that all these dining concepts were not overlapping at all. They were all unique in their own way.

My first collaboration in Hong Kong was with Amber in 2018. At that time, chef Richard Ekkebus jokingly told me that every chef who has collaborated with him ended up opening a restaurant in Hong Kong. So when I signed the contract with ZS hospitality to open Hansik Goo, I immediately messaged Ekkebus and said: “Your joke became reality.”

We call this restaurant Hansik Goo 2.0, but actually our mindset is that we are opening a whole new restaurant again. I want to focus on this restaurant to make sure it is successful and stable, as well as meeting expectations of the diners. Of course, I will continue to work hard on Mingles as well.