“I think the act of eating is a very personal act,” says Agustin Balbi of one-MICHELIN-starred Ando. “If you think about it, you are putting something in your body that's from someone else you don't know. It becomes a trust relationship.”

Born and raised in Argentina, Balbi learned this firsthand from his grandmother, Lola, who showed her care for him simply by feeding him with homemade comfort food. Her caldoso rice, a traditional Spanish dish, holds a very special place in Balbi’s heart—and on Ando’s menu since day one. “Sin Lola” (without Lola) is more than just a refined version of his grandmother’s caldoso rice; it’s a dish that embodies her genuine hospitality, which now becomes the spirit of Ando. Served last before dessert, the caldoso rice is the only dish on the menu where the service team would ask guests if they want seconds, just as how his grandmother would at home. 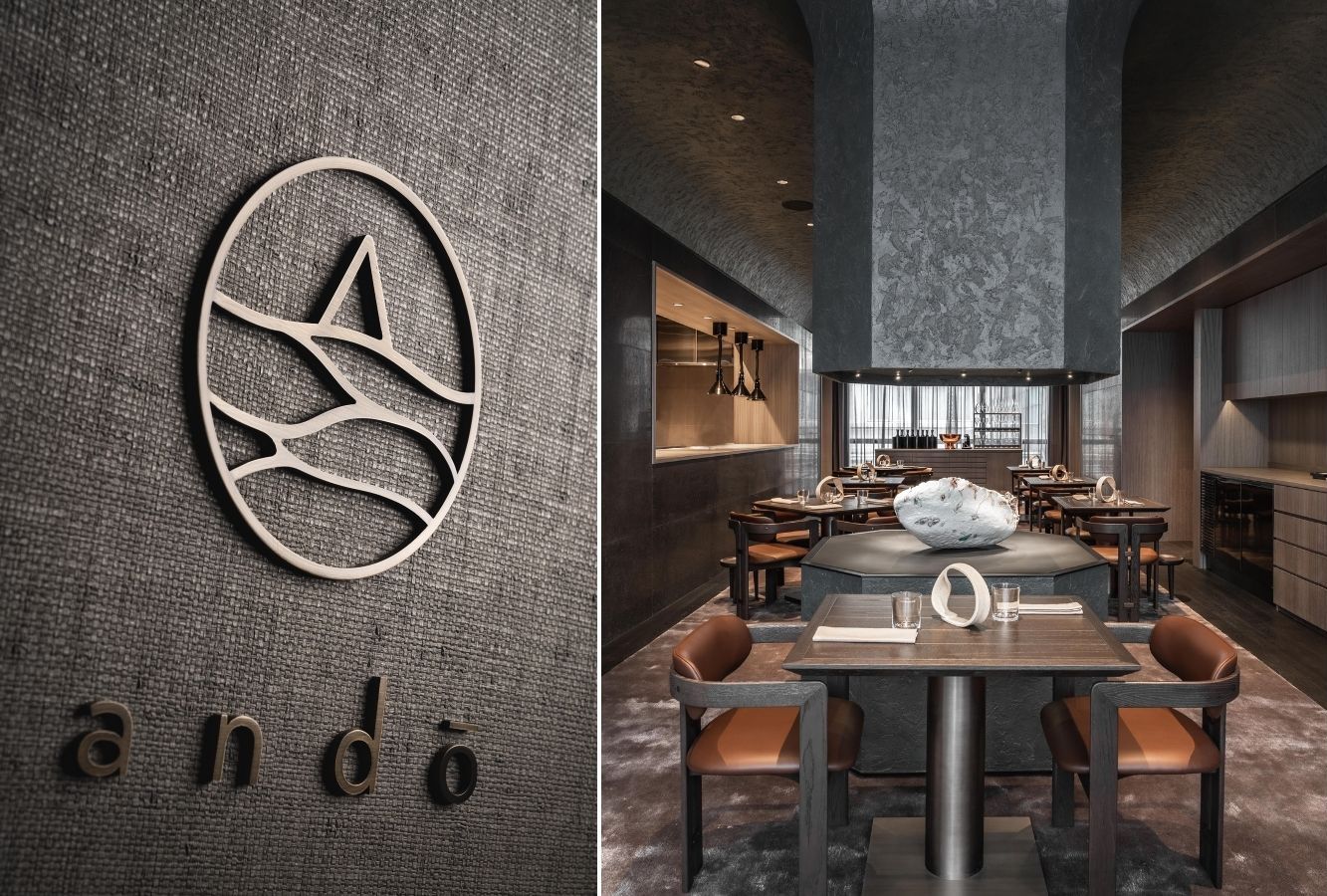 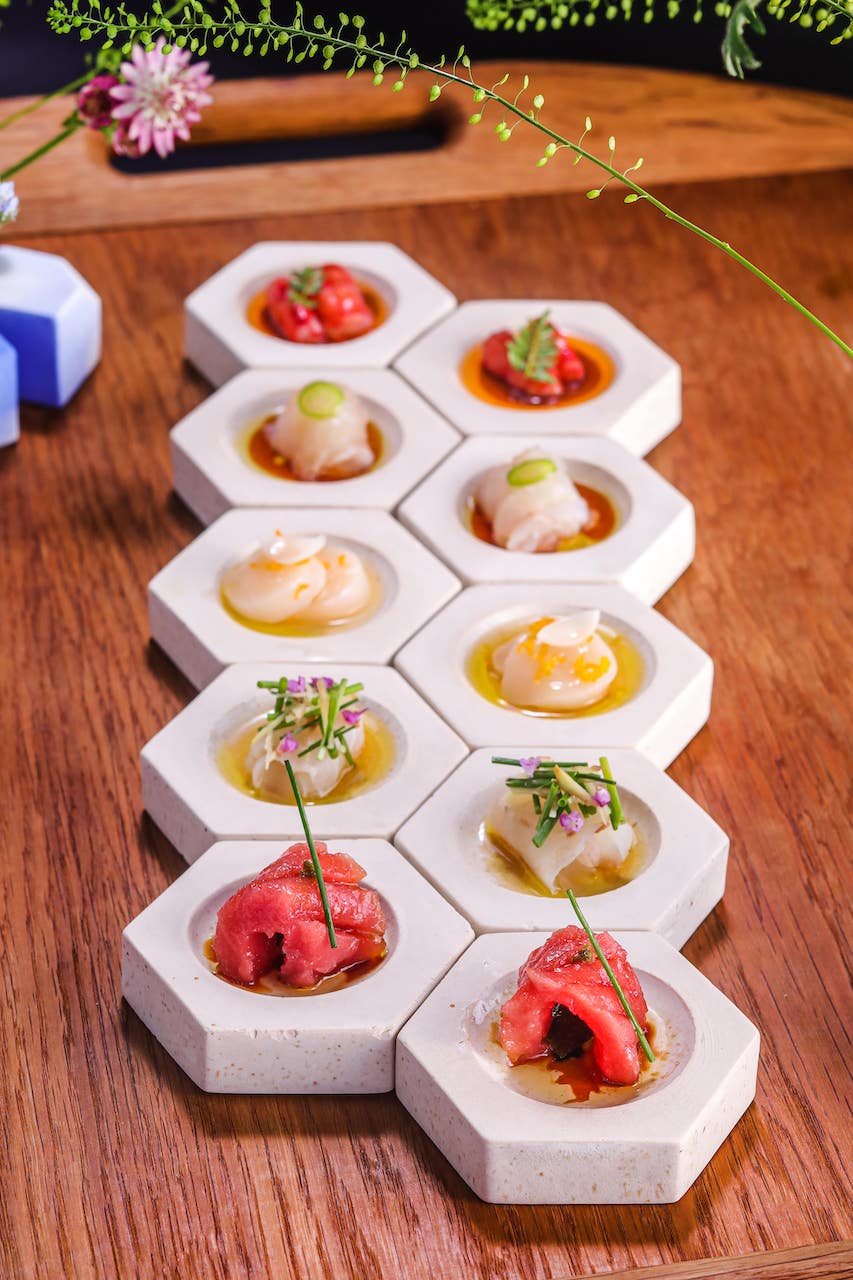 A detour to the East
Described as “innovative” by MICHELIN inspectors, Ando is a personal expression of Balbi’s Spanish heritage and training in Japan. Since his early days in the kitchen in Argentina, Balbi’s dream was to become a chef one day: “I fell in love with the adrenaline in the kitchen. And the romantic idea of knowing different cultures and traveling to different places with your job.”

And travel he did. His first stop was New Orleans, where he discovered Japanese seafoods, including the likes of uni and kombu, that he had never encountered in Argentina. From there, he was offered the opportunity to work in either Spain or Japan. Spain would have been an obvious choice for most chefs from Argentina, but Balbi’s rebellious streak took him eastward, despite not speaking a single word of Japanese at the time.

READ MORE: What Our MICHELIN Inspectors Say About Ando 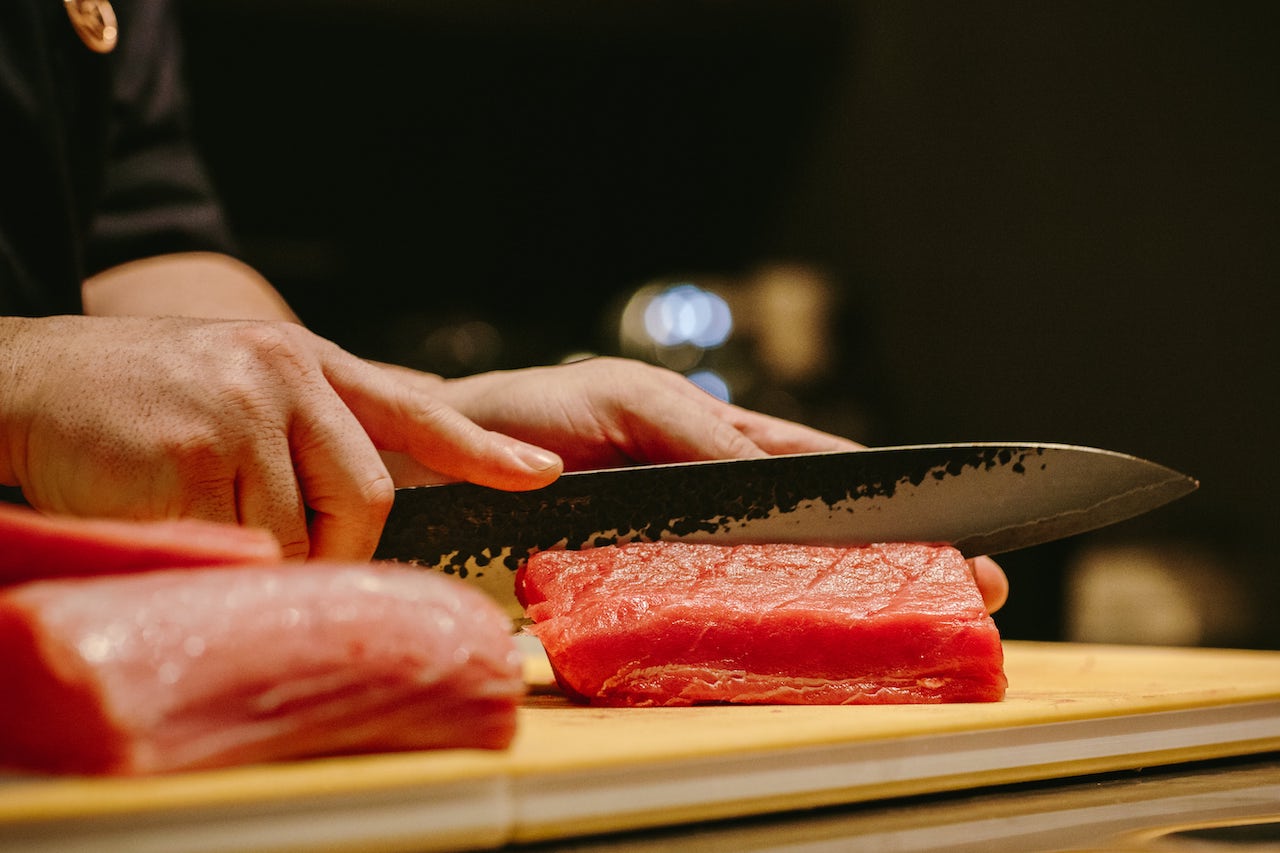 Tuna, one of the raw seafood selections on Ando's tasting menu. (Photo: Ando)

The philosophy of omotenashi
After moving to Japan, Balbi did not let the language barrier stop him from learning in the kitchen. “I would buy children’s books after work and practice writing in Japanese,” he recalls. “What I wanted to understand is not just cooking skills from Japanese chefs but why they do what they do.” As he became more proficient at the language, his understanding of the Japanese way of living, and consequently his sense of respect and admiration for the culture and people had also grown.

After spending six years honing his craft at three MICHELIN-starred restaurants in Tokyo, Balbi took with him not only his knowledge in Japanese ingredients and cooking techniques but also the spirit of omotenashi when he moved to Hong Kong in 2016. Omotenashi, meaning to serve wholeheartedly, is a Japanese mindset that resonates with Balbi: “One of the things I’ve learned from omotenashi is to be genuinely thankful to guests and acknowledge that they always have a choice. For example, there are probably 50 restaurants on this street, but you choose to come here and spend your hard-earned money with us.” 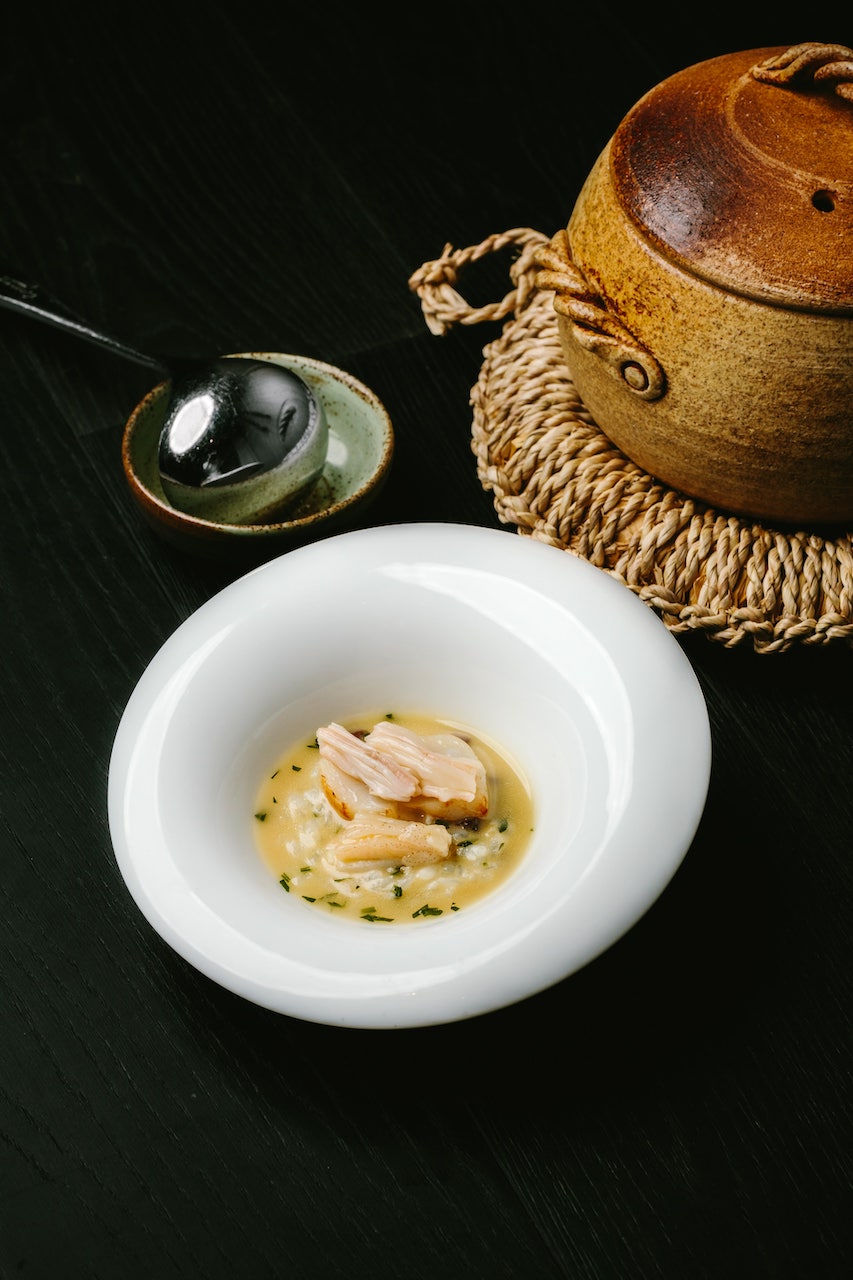 It is with the same respect that the chef-founder decides that when he is not in the kitchen, the restaurant is closed for the day—a practice followed by many small, owner-operated restaurants in Japan. “The first thing I say when I greet the guest is ‘welcome to my house’, not ‘welcome to my restaurant’. So imagine I invite you to my house but I am not there—it makes no sense. My mindset is that I am here not because my team cannot make it but because I need to be respectful to the guest.”

This unshakable discipline, together with a unique, respectful approach to fusing Balbi’s Spanish heritage with Japanese inspiration, saw Ando through the global pandemic since it opened its door in July 2020, leading the restaurant to its first MICHELIN star in the MICHELIN Guide Hong Kong Macau 2021.

Ahead, we speak to the 33-year old chef about his first encounter with the MICHELIN Guide, first reaction when Ando received a MICHELIN star, and advice for aspiring chefs.

When did you first hear about the MICHELIN Guide?
I was in Argentina. I was in my second job at the best restaurant in Argentina at the time. One day the chefs were talking and they said to me, “I will only call you a chef when you have a MICHELIN star.” I was like, “What’s a MICHELIN Star?” I had no idea what it was because we don’t have the Guide in Argentina. So I started looking up MICHELIN Star restaurants on the internet, and saw all these beautiful foods. I told myself, this is what I want to make. That's why I left Argentina—to work at and learn from restaurants that got MICHELIN stars.

How did you feel when Ando received its first Michelin star?
It was crazy because we opened in the middle of the worst year in the universe for restaurants. We opened in July 2020 for three weeks only and then we had to close for dinner for a month. And after that we had to close for four days completely - lunch and dinner. But whenever we open, we do what we do best. We go full on. The Michelin star was unexpected for us because we didn’t know whether the Guide was going to happen as there were many rumors. But we said, never mind, we just focus on the restaurant and do our best here.

How did you celebrate?
Before the revelation, we received an email from MICHELIN Guide saying, we want to have a Facebook Live session with you for your takeaway. So I was being interviewed by the host on Facebook Live and at the same time the announcement was happening. When they announced Ando got the new star, we all started screaming—it was in the middle of service as we were doing long lunch service that day. So we opened a few bottles of champagne and gave every guest a glass. The whole team was very happy, it was a vote of confidence confirming what we are doing is good.

“Today there are many guides, but the MICHELIN Guide is the most respectable guide worldwide.”

Who’s the first person you called?
My wife. Then I called my family in Argentina but they didn’t understand why I was so happy because they don’t know much about the MICHELIN Guide. Then my friends and chef friends. My phone went crazy when I was on Facebook Live, I had like three million messages (laughs).

What does the MICHELIN Guide star mean to you?
A lot of happiness, but also a lot of responsibility. Before we got the star, we were just a restaurant, so people didn't know what to expect. Of course, we had weeks of bookings before receiving the MICHELIN star and people came with expectations when they had to wait for a week or more to dine here. But now it's about exceeding expectations. For example, we’re collaborating with a local artist to create a new menu that includes drawings of the story behind every dish.

The MICHELIN Star is a vote of confidence that confirms what we have been doing is good, and now we want to do even better. The MICHELIN Guide has been running for more than a hundred years and the inspectors have dined at many restaurants. If they say this restaurant is valuable enough to be in the Guide, it means I have a hundred years of responsibility in my hands. So we take this very seriously.

Do you have any advice for young chefs who want to get a MICHELIN star?
I don't know if I can give any advice, but what I did worked for me. I think it comes down to three pillars: experience, study and feeling.

For example, I would recommend you, if you're young and say you don't have a family, use the money you earn—which is not a lot if you are starting out as a cook—on three things: eat at the best restaurants wherever you are, buy knives to practice, and buy books to study. I invested in these three things because I wanted to experience how it feels as a guest. That’s very important because many chefs do many things, but they forget about the feelings of the people. It was very expensive for me—a meal would cost a quarter of my salary, but the experience was worth it.

Then I would buy the best knives to practice hours and hours—cooking is a craft. You can go to the best culinary school but the more you practice, the better. I know many excellent top chefs who never went to a culinary school, but they all bought books and studied.

The third thing I would recommend is don't waste your time. Find a chef who has a style that you like. Go work for them and try to understand why they do things, how they think, and how they work. It’s not about the cooking; what you need to understand is the mind. Then maybe one day you’ll be able to put your own thoughts on creating something special.