The First Day We Got Our Stars: Ryohei Hieda

RyuGin is one of two restaurants to receive two Michelin stars in the newly launched MICHELIN Guide Taipei.

Once, after a culinary seminar, the media described RyuGin's chef Ryohei Hieda as having such a finesse with Taiwan's produce that it was as if "the ingredients had all previously been shortchanged". 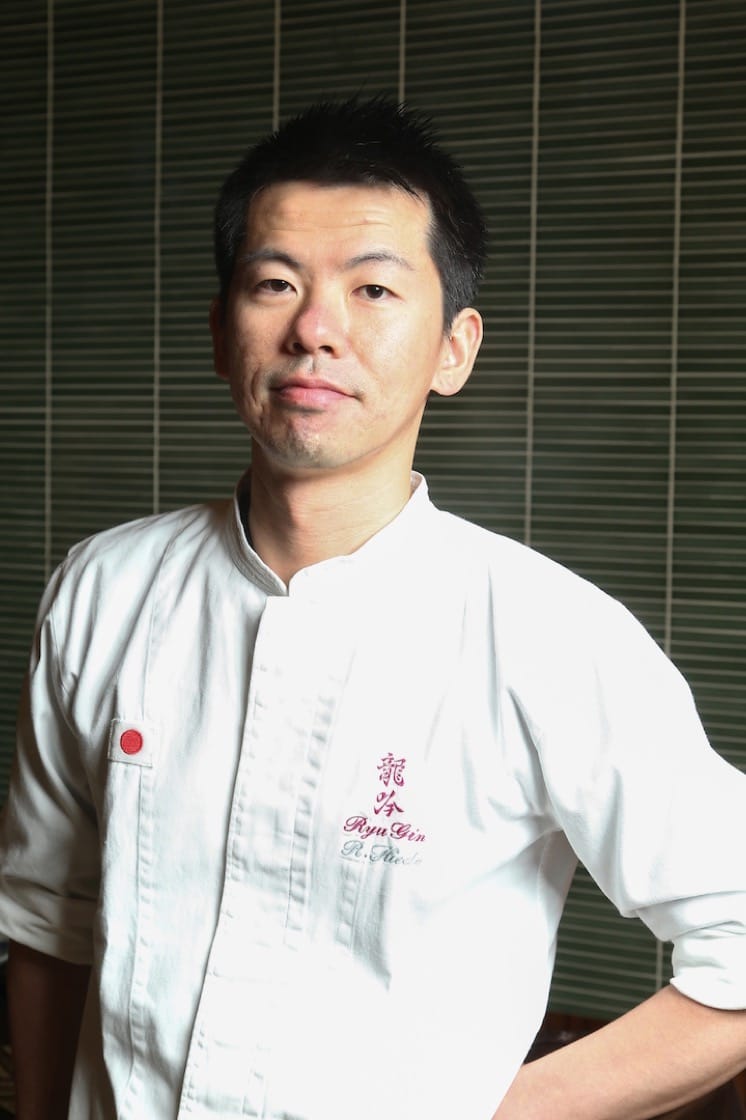 Beating his own path

37-year-old Ryohei Hieda embarked on his culinary journey at the behest of his grandmother. He admits that after graduating high school, he did not have any ambitions nor did he wish to further his studies, so he started working odd-jobs for about a year before he realized that it wasn't sustainable.

His grandmother then advised him to think deeply about his calling and vocation. He reflected that what gave him the greatest sense of satisfaction growing up was when he cooked for his parents. And so, he started working at an izakaya, slowly picking up culinary skills.

At 19 years old, he entered the kitchen of Kyoto's famous Kappou Nakagawa in Gion and formally began his training in Japanese cuisine. Despite his late start, Hieda was a fast learner, developing clear goals in a short amount of time.
Five years later, he returned to Kyushu with the purpose of learning how to make salt and use it for seasoning. Mastering this while having a keen grasp of ingredients allowed him to grow in culinary knowledge and skill. He joined RyuGin at 27 years old and received training from head chef Seiji Yamamoto before he was dispatched to Taipei to helm its sister restaurant, Shoun RyuGin.

The beauty of Taiwan's produce

Chef Yamamoto was unique in his perspective of what Japanese cuisine should be. His philosophy was that the cuisine should showcase the seasonality and terroir of the local produce, no matter which country the restaurant was in. Shaking aside criticism, he championed his cause through innovative ways. Such was his influence on chef Hieda who set out to use more than 90 per cent Taiwanese ingredients in his kitchen. He showcased the beauty of Taiwan's local produce, surely a challenge for a Japanese chef unfamiliar with the territory and who did not speak the language.

Six months before the opening of RyuGin, chef Hieda faced insurmountable challenges sourcing for ingredients in Taiwan. Compared to Tokyo, the supply of ingredients in Taiwan was unstable and inconsistent, both in quality and price. His initial disappointment, coupled with the pressure of carrying the RyuGin brand, made it a difficult time. "In retrospect, I was being self-serving and didn't truly appreciate the local produce of Taiwan. I realized that if I continued going down this path, I would not be able to create a Japanese cuisine unique to Taiwan."
Advertisement
Advertisement 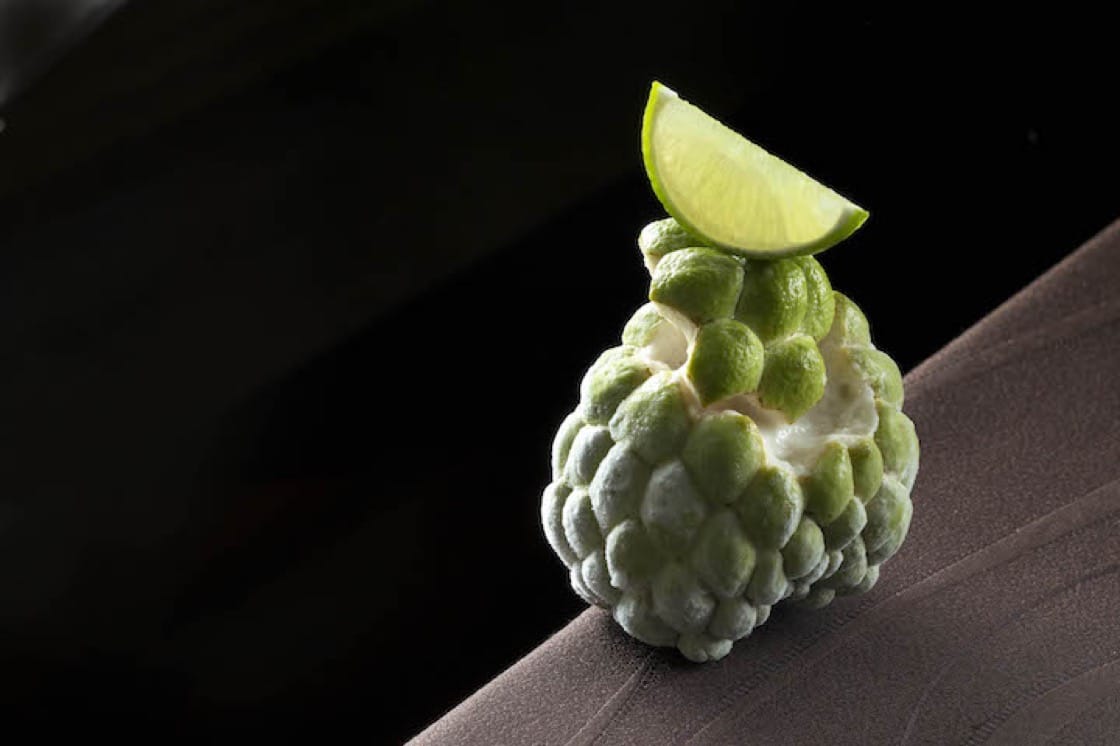 From RyuGin's seasonal winter menu is this dish of custard apple and lime.
"The most important thing I learnt from chef Yamamoto is determination. Once you have determined to do something, like-minded people will come alongside you to help. I was determined to do all I could to showcase Taiwan's produce in my Japanese cuisine. Come hell or highwater, I would not fall back on the usual Japanese ingredients. And so, I set my mind to search out the best of Taiwan's produce."

Switching gears, he stopped making comparisons and instead began researching Taiwanese produce earnestly, seeking to learn about it and growing in appreciation for it. He would scour the internet for information, conduct sourcing trips at the famed Bin Jiang market and visit the grocers every other day. He worked hard to overcome the language barrier and ventured further out to the regions of Tainan, Hualian and Nantou County to speak with farmers and producers and develop relationships. 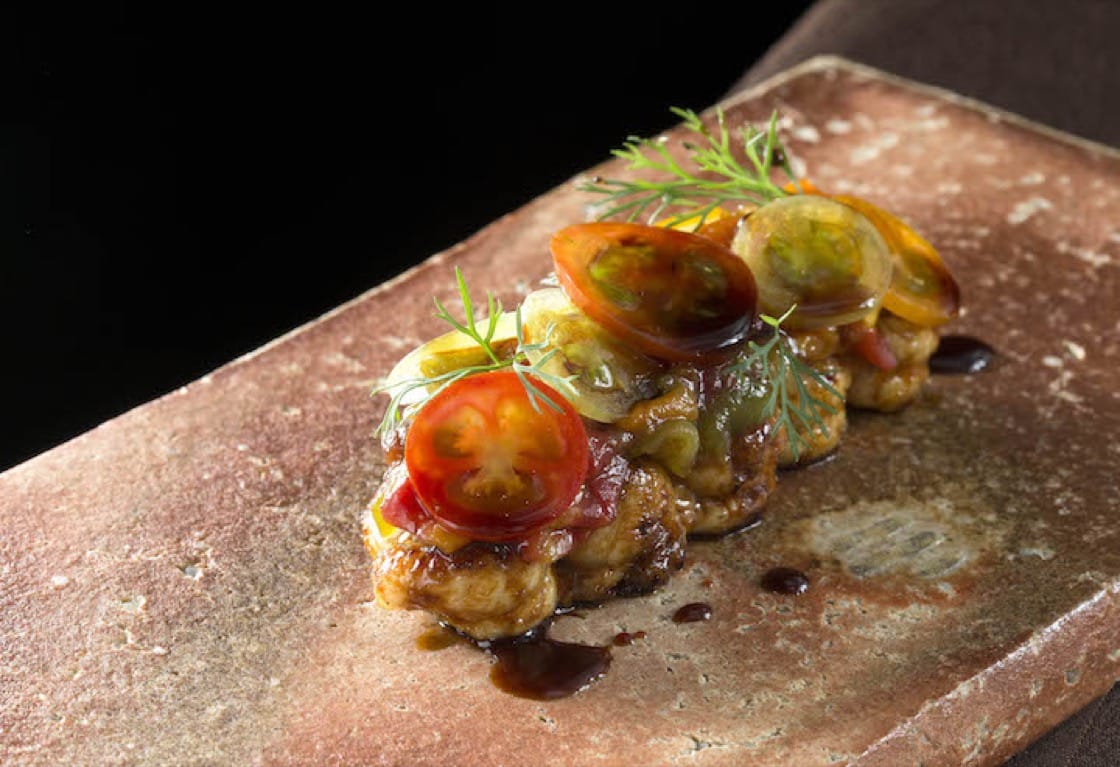 Another winter dish on RyuGin's seasonal menu showcasing the textures of tomato.
The ordinary tang-oh, or chrysanthemum leaves, is transformed under chef Hieda's hands. He cooks them in a savoury stock and uses it to dress a dish of grilled fish, letting the unique aroma of the vegetable shine through and bring out a new flavour dimension to the fish. A refined starter of fresh clams with chopped basil showcases the natural beauty of Taiwan's terroir.

He recalls a particularly memorable sourcing trip to Tainan: "When I first tasted the tomatoes grown on Yuanqi Farm, I discovered that they were so different from any tomato I had ever tasted. Other than the sweetness, I could also taste the rich terroir of the land it was grown on. When I was staging at three Michelin-starred Manresa, I thought I had eaten the best tomato I ever would in this life, but never in my wildest imagination did I think I would find a better tomato in Tainan." Getting to know the farmer broadened his horizons. "I believe Taiwan has so much more to offer, I have just barely scratched the surface."

RyuGin was one of two restaurants to be awarded two Michelin stars in the inaugural edition of the MICHELIN Guide Taipei. The chef shares his joy of receiving the accolade. 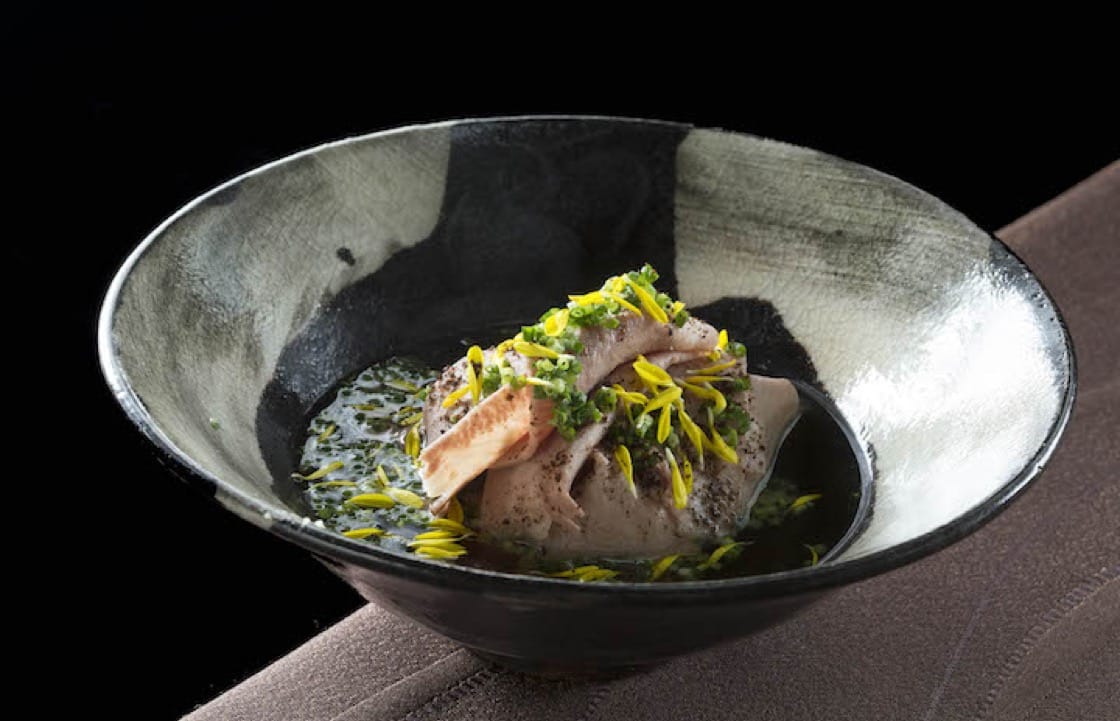 A dish of ox tongue, white radish and Makao leaves.
When was your first encounter with the MICHELIN Guide?
I first came to know about it when I became a cook at 19 years of age. The Guide had not yet come to Taiwan when I opened RyuGin and so I did not expect to ever be in the Guide. I am very happy to be able to achieve a star this time.

What was running through your mind when you first heard RyuGin won the stars?
I felt a sense of relief. Now I had something to show in return for the trust that chef Yamamoto has given to me. I think he would be very happy for us.

How will you celebrate?
Everyone was very happy and we already had a little champagne with the team before we set off for the press conference. We will have a good meal with everyone tonight.

How will the stars change the direction of the restaurant?
With this recognition, the team can have a sense of achievement and be proud to say: "Oh, I work at this Michelin-starred restaurant." I feel particularly proud and honoured. Everyone will work harder to maintain these high standards and take the restaurant to a new level of sophistication in terms of cuisine and service. Being recognized today is the result of a team effort. These stars will be a driving force for us.

Do you have any advice for young chefs aiming for Michelin stars?
The most important thing is to know yourself, know what you want and what you stand for. If you find your passion, you must persevere in it and not be knocked down by anyone or any challenges.
RELATED: First Day I Got My Stars: Ken Chen And Matt Chen of Le Palais
This article was written by Sabine Chen and translated by Rachel Tan. Click here to read the original version of this story.
Advertisement
Advertisement