Mexico’s Pacific Coast is where you’ll find Mexico’s first major beach destinations (like Acapulco and Puerto Vallarta) and, more recently, some of its most unique and awe-inspiring boutique hotels. Pack your suitcase and head west to these hotels from our hotel partner, Tablet.

Puerto Vallarta
Yearning to get away from it all? Puerto Vallarta probably isn’t quite the first place you’ll think of. But then there’s Xinalani, a gloriously secluded eco-resort wedged between the jungle and the water. Technically, it’s in Puerto Vallarta, but it’s actually twelve miles down the coast from the city proper, and only accessible by boat — which makes all the difference. 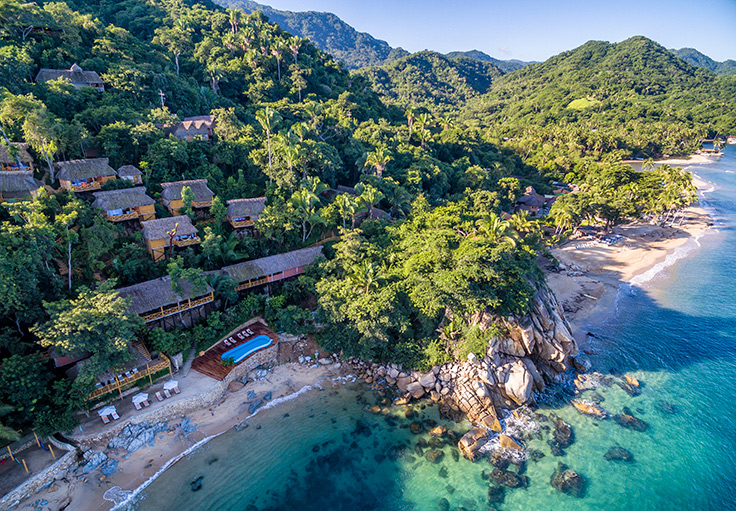 Puerto Vallarta
Any hotel that’s memorable and presents a unique point of view on its setting qualifies as a boutique hotel, in our book. Puerto Vallarta’s BellView Boutique Hotel fits the bill. For while there are plenty of bigger and more contemporary hotels in this town, there’s nothing else like BellView, whose four rooms and suites are overflowing with the sort of historical elegance that’s in painfully short supply around here. 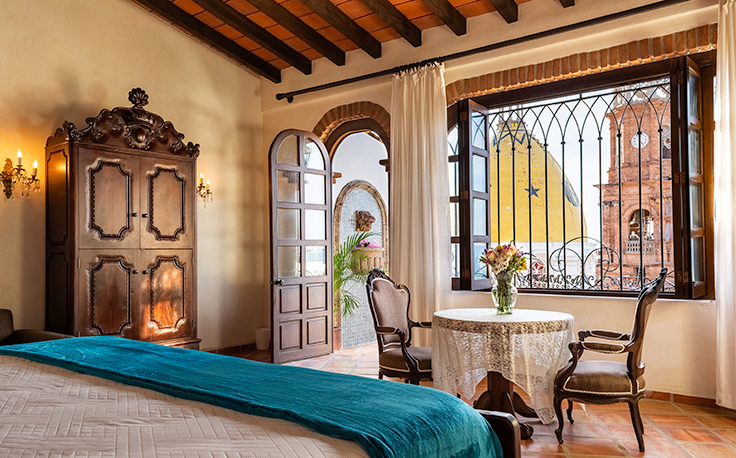 Puerto Vallarta
This lovely pair of adjoining villas in Puerto Vallarta was once home to Elizabeth Taylor and Richard Burton — and while the connection is part of its charming history, what’s important about Casa Kimberly is the sheer extravagant romance of the place as it stands today. The suites are all different, but all are exceedingly comfortable and elegant in a way you have to imagine Ms. Taylor would have approved of. 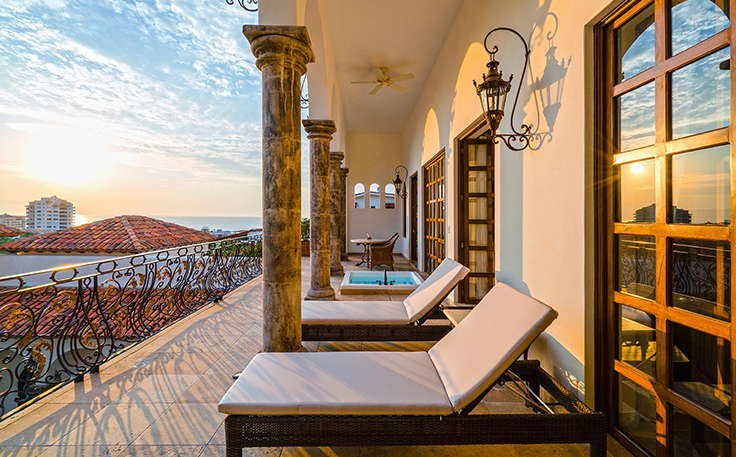 Puerto Vallarta
Puerto Vallarta was, at one time, among the most glamorous of Mexican destinations — and though it fell victim to overdevelopment, it’s never completely lost its magic. These days there’s a bit of a resurgence at hand, with a few absolute gems among the big hotels. One of the better examples is the Hacienda San Angel, which offers a measure of privacy and exclusivity that might be without equal anywhere in town. 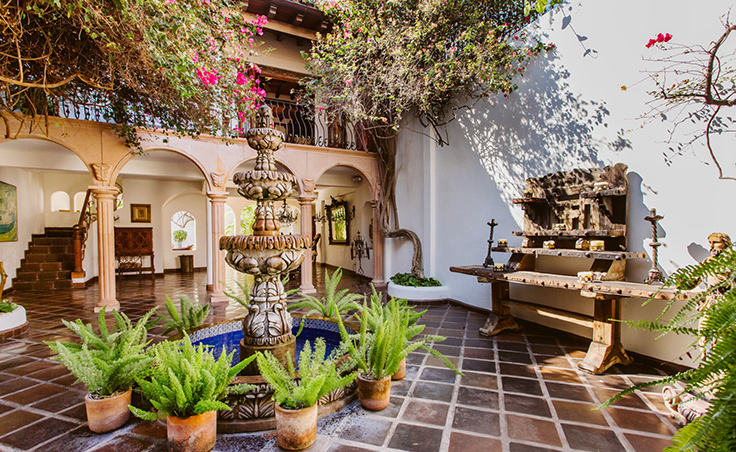 Zihuatanejo
Whatever your mental image of mass tourism on the Mexican coasts, Playa Viva is more or less the opposite of that. A mere 12 casitas, for starters, is about as far as it gets from mass tourism in the first place. And this location, on protected land a half hour outside of Zihuatanejo, has a long, long way to go before it could be considered developed, much less overdeveloped. 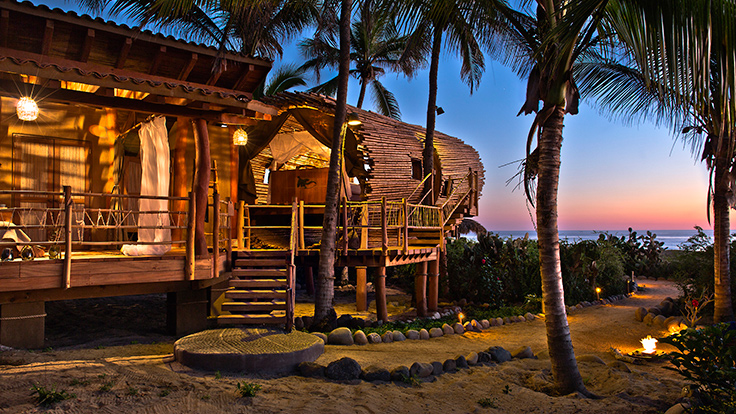 Zihuatanejo
La Casa Que Canta sits high over the water, cut into a hillside above Zihuatanejo Bay, offering an extraordinary sea view as well as a splendid sense of seclusion. There are just twenty-five suites, all with terraces overlooking the sea, that combine with classic traditional architecture and outstanding service to create a sort of private residential atmosphere. 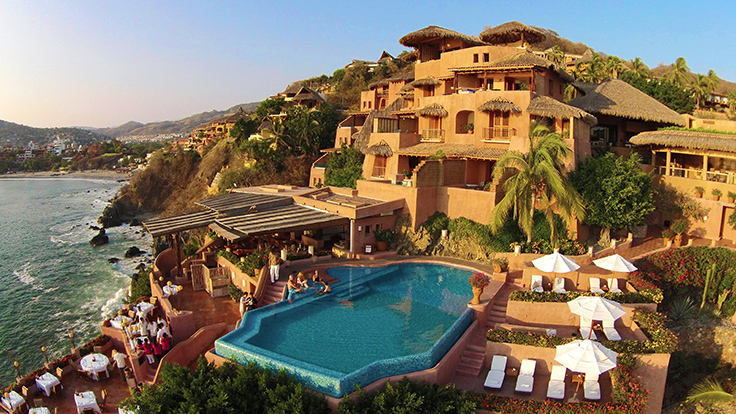 Zihuatanejo
The old Villa del Sol, a Zihuatanejo beachfront classic since 1978, is now the Thompson Zihuatanejo. New ownership hasn’t changed the essential appeal of the place one bit; it’s still right on Mexico’s longest beach, the suites are still spacious and private as ever, and the service is still tireless and efficient. 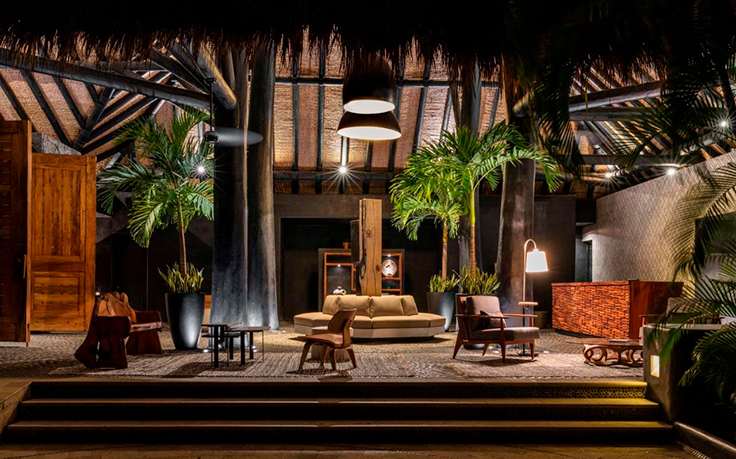 Mazunte
The Pacific coast of Oaxaca isn’t exactly undiscovered, but it’s pleasantly under-developed, probably because it’s still satisfyingly tough to get to. Boutique hotels were understandably rather late reaching places like Mazunte, but the advent of a place like the Cocolia Hotel marks the beginning of a new era; finally this fantastic destination has a small but stylish and full-featured hotel to call its own. 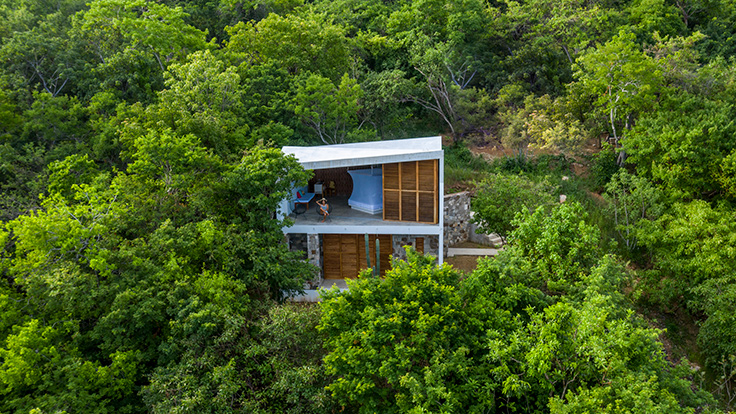 Mazunte
This stretch of south-facing beach on Oaxaca’s Pacific coastline, spanning the villages of Mazunte and San Agustinillo, is spectacular, and the towns are in that sweet spot: lively but not crowded, off-the-radar but not impossible to reach. And while the beginnings of a luxury travel scene are present, they’re tasteful and restrained — a description that suits Zoa perfectly. 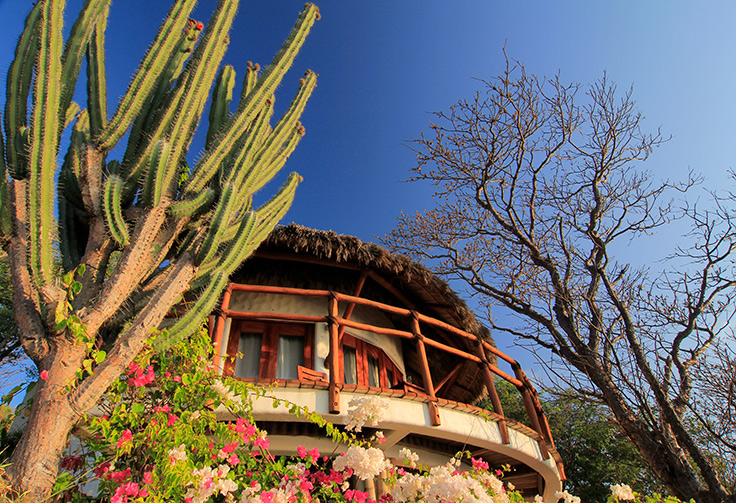 Careyes
Was it Walt Whitman or the nation of Mexico that said “I am large, I contain multitudes”? It was the poet, of course, but it’s equally true of Mexico — whether your picture of it is the ruined pyramids of the Yucatán or the hip nightspots of the Distrito Federal, you can bet there’s another side of Mexico you’re not considering. In the case of Costa Careyes, it’s the exclusive, relatively undeveloped, upscale yet unpretentious side. 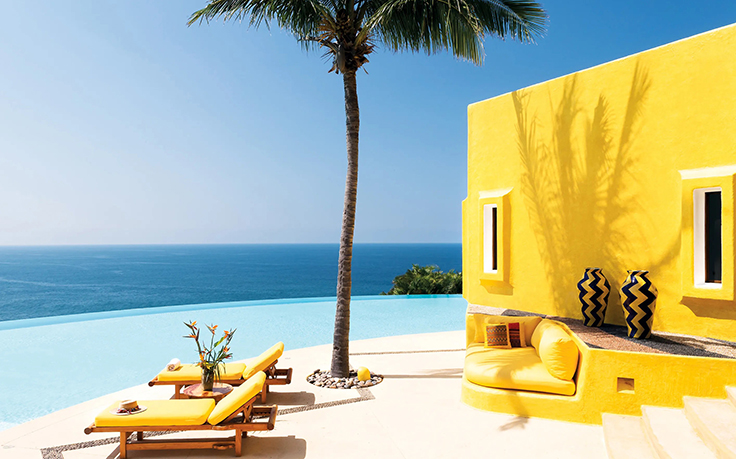 Santa Maria Huatulco
It’s shocking that, at this point in Mexican tourism, a place like Villa Escondida can have a little stretch of coastline all to itself, a short distance from the Huatulco airport. This is a hotel, but just barely: with four suites it’s about as small as they come, and if you’re traveling with a party of ten or fewer, it’s not at all out of the question that the whole villa could be yours. 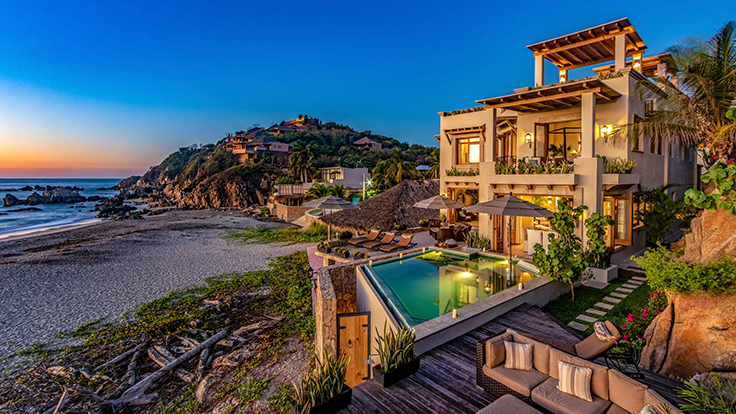 San Agustinillo
San Agustinillo is in the midst of transforming from fishing village to holiday destination. So far it’s proceeding slowly and sensitively; you wouldn’t mistake Monte Uzulu Boutique Hotel for a big all-inclusive resort. The buildings are a contemporary version of traditional thatched-roof palapa structures, and the experience balances sensitivity to the locale and the environment with the demands of modern boutique hospitality. 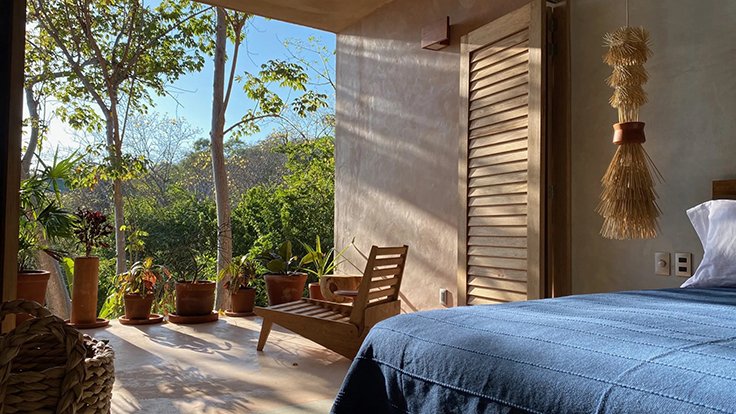 Puerto Escondido
Grupo Habita made its name over the past two decades with boutique hotels of the high-design variety; thanks to Carlos Couturier and Moisés Micha, the Mexican hospitality scene could boast some of the most stylish hotels anywhere. Less polished than its urban sisters — though no less memorable — is Hotel Escondido, a minimal-rustic beachfront boutique hotel on Oaxaca’s Pacific coast. 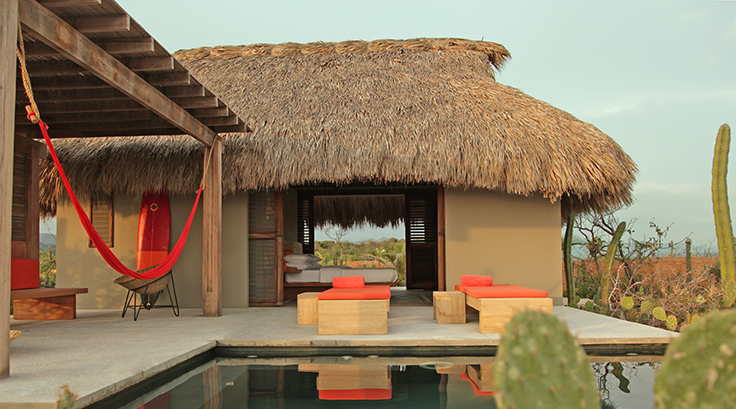 Lo de Marcos
An hour or so up the coast from crowded Puerto Vallarta, the spectacular One&Only Mandarina combines eco-lodge sensitivity, boutique-hotel good looks, and luxury-hotel comforts and facilities, all in a tranquil setting amid 80 acres of coastal rainforest. The treehouses and villas are stunning, inside and out, and come with every conceivable luxury, from plunge pools to butler service. 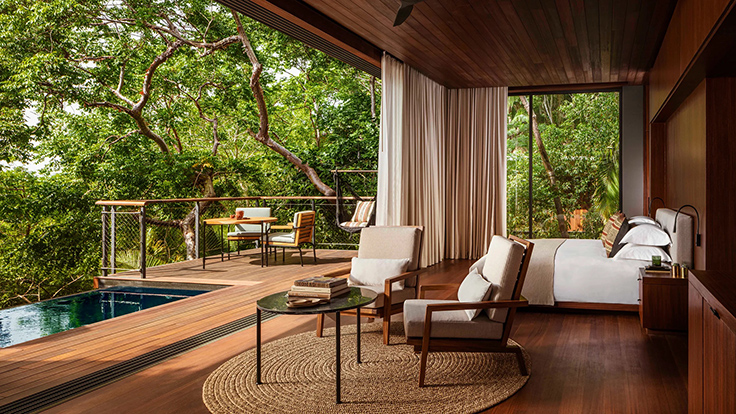 Punta de Mita
In Mexico the big resorts might be the path of least resistance, but at this late date anyone who’s looking for something with a bit more personality has no excuses. With so much coastline it can’t all belong to the big developers — some of it, thankfully, goes to more sensitive proprietors, people like Imanta, whose Punta de Mita resort combines castaway seclusion with contemporary villa comforts. 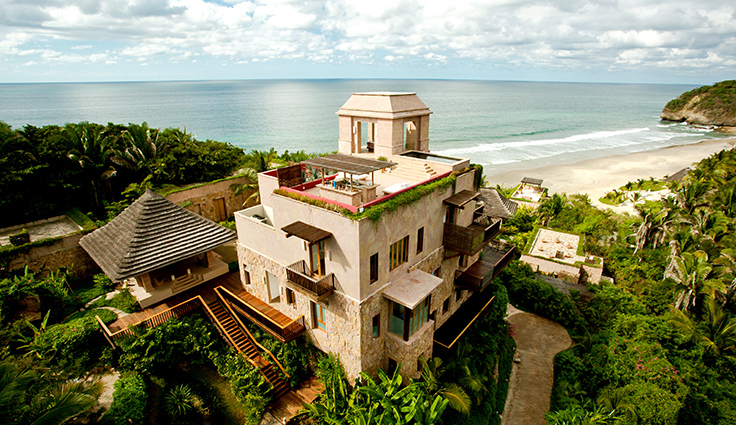 Costalegre
The backstory of Las Alamandas seems too fantastic to be true. A Bolivian tin magnate plans a beachfront mega-resort but doesn’t live to complete it, so his granddaughter takes over. To preserve the land (and dolphins) so dear to her, she revises her grandfather’s plan and erects a tiny resort, where a maximum of 28 guests have at their disposal 1,500 acres of pristine beachfront land and close to 100 staff members. 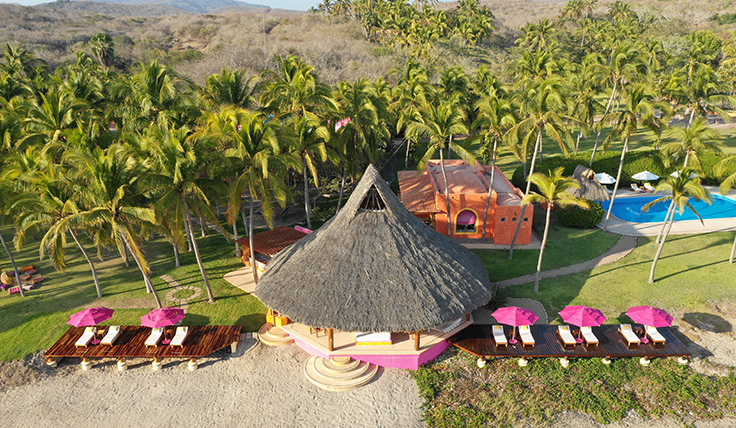 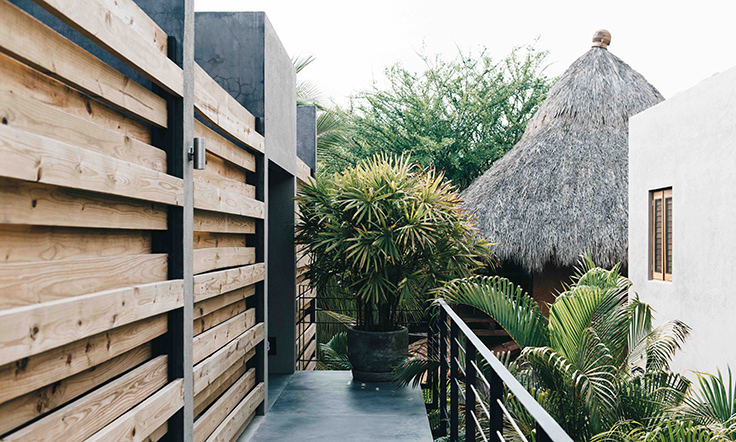 Hero image: Costa Careyes. All photos courtesy of the hotels