MICHELIN Guide Budapest : at the heart of Budapest, this restaurant offers a world tour of tastes and flavors

Thanks to his multiple television appearances, Jenő Rácz had already acquired a great popularity in Hungary. Now the young chef is the head of Rumour, a theatrical restaurant where an elevencourse menu showcases the colors and flavors of his Hungarian roots, mixed with influences from his travelling years in Europe and Asia.

Arriving at Rumour, in the center of the city and on the vibrant Pest side, you might find yourself looking for the entrance door. From the street, all you can see are large windows covered by heavy velvet draperies. Nothing really signals that you are standing in front of a fine-dining restaurant. You must actually go through a welcoming deli shop, with its mouth watering shelves of artisanal products, to enter the theatrical, two-floor Rumour. The dining-room is built around a vast open kitchen - « a concept I always liked », says Chef Jenő Rácz - lined with a long counter top. Diners sit next to each other, on elegant red bar chairs. They are the audience of a glamorous cooking show, unfolding in eleven courses… and just as many wine or cocktail pairings.

Rumour’s website modestly introduces the restaurant with the following words: « An evening spent at the restaurant can be compared (with a little exaggeration) to an intimate dinner with a small number of friends. » That is actually not exaggerated, but understated. Unless your friends love to perform a real act when they prepare their famous spaghetti carbonara on a Saturday night, not many home cooks can put up a show like Rumour does. It’s theatre. It’s magic. It’s nothing like an intimate dinner, and that’s perfectly fine. 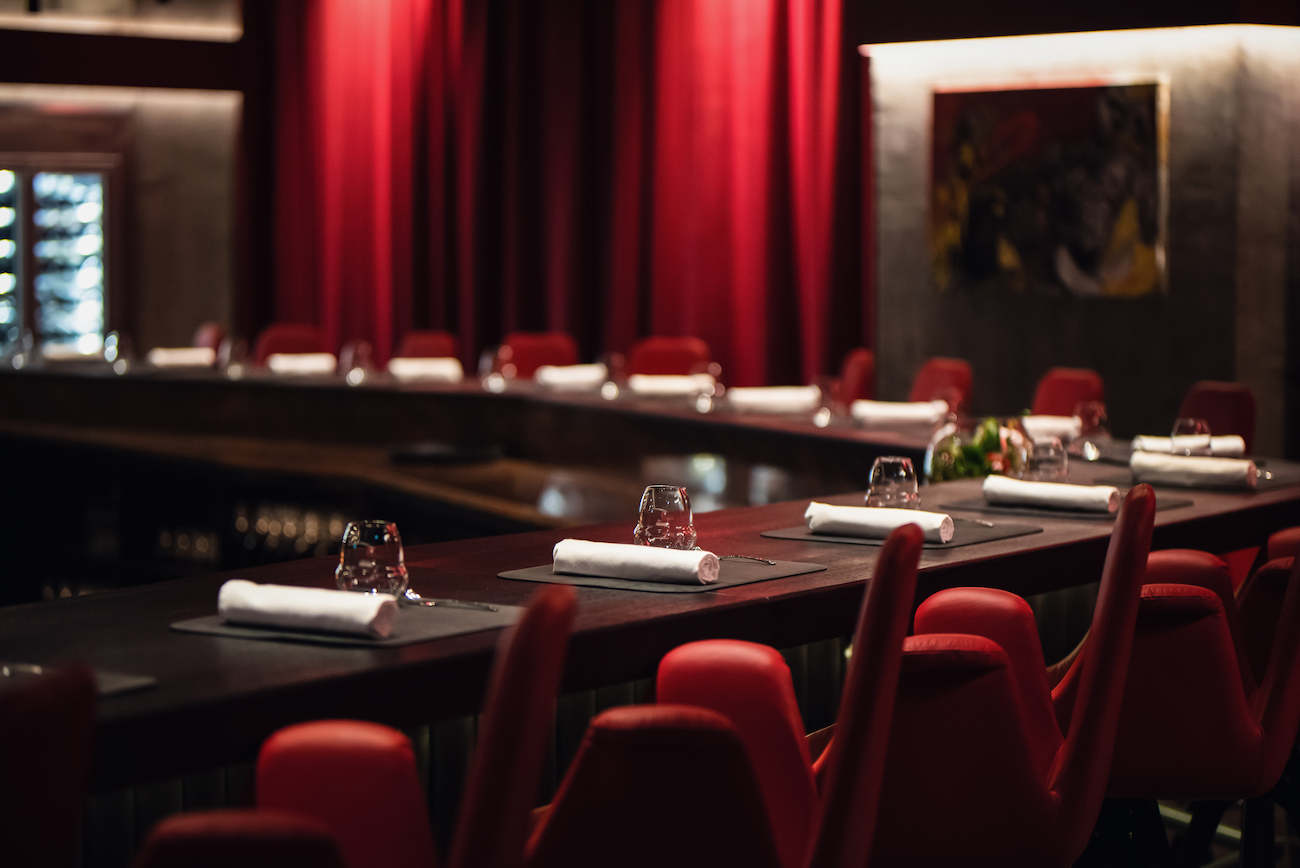 Chef Jenő started cooking when he was still in school. At a housekeeping class, he baked an apple pie which enthralled his teachers and his schoolmates. « That’s when I first realized that I could be good at cooking », he says. He was only 18 when he left Hungary, coming back ten years later « with the exact same suitcase ». Training in London, then in Copenhagen (as an intern at Noma), he later set out for Singapore, where he worked for Joël Robuchon, the first chef of the Western world to ever imagine an open-kitchen « show » in a restaurant in 1989, probably inspiring the concept at Rumour. But that’s not the only idea Chef Jenő got from his training at Atelier Joël Robuchon. « I love the hedonism of classic French cooking », he explains, then adding with ecstasy : « I’m crazy for the piment d’Espelette ». In 2016, he moved to Shanghai and worked as Chef Stefan Stiller’s chef de cuisine at his restaurant Taian table, where he earned a Michelinstar after only five months. « Each province in China has different ingredients and cooking styles. It was an exciting time for me to twist European cuisine and techniques with local Chinese ingredients » he explains, « China has offered me such a huge new range of flavours nowadays that I use a lot of them in my cuisine, like the Chinese 5-spices in my foie gras terrine. Fennel seeds and the vibrant Sichuan pepper are giving such a twist to it that it became my favourite seasoning for foie gras. »

While French-trained, Chef Jenő collected many different techniques and influences during his formative years. His Hungarian traditional dishes are tweaked with Asian ingredients, sometimes paired with unexpected wines, like the customary (and exquisite) pan-fried foie gras served with a red wine from Veneto, in Italy. « If I want to use mackerel from Japan, I will go to any length to get it », the young man says, « I love Japanese cuisine and I used to regularly hop on planes from Singapore to Tokyo ». Singapore is also the place where he got acquainted with the spicy, warm taste of the local Indian immigrant community’s cuisine. « I liked the contrast of eating Indian street food standing outside, surrounded with huge, modern buildings ». 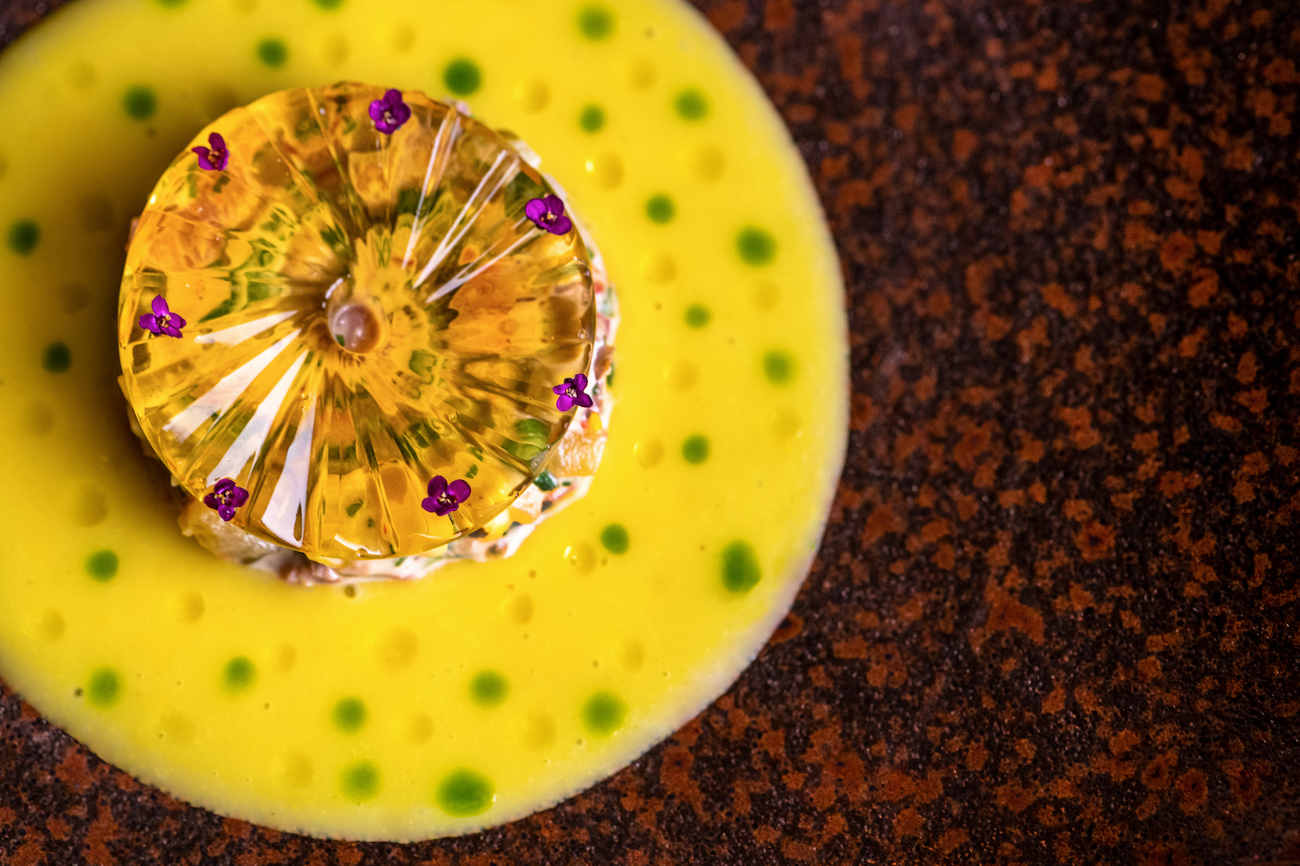 Jenő Rácz is a visual chef. His dishes are always cosmetically creative, often surprising. He who is a famous jury member of a major Hungarian TV cooking show, and was selected as the coach of the Bocuse D’Or Chinese National team in 2018 and 2019, naturally sees himself as an entertainer. His dessert, made with five different types of Hungarian honey, is sprinkled with pop sugar reminiscent of his childhood, which bursts deliciously into one’s mouth. Like in any good magician show, puffs of smoke are part of the game. The menu looks like a secret file, and at one point, the guests are asked to pick their own Laguiole knife, choosing from a range of different colors. Chef Jenő stresses that everyone should feel special during a dinner at Rumour. « Over the last years, people have stopped taking care of each other. I want the guests to feel like they’re being taken care of. It’s a professional restaurant, but it’s friendly as well. Service should not be cold. » During your dinner experience, the chef will regularly check on you, just like the rest of the staff, the very knowledgeable sommelier included. (Note about the wine pairing : It is quite impeccable, and many authentic Japanese sake are on the list. Follow their recommendations with eyes closed).

To Chef Jenő, every dish must have a story, and he tells us one : one day, by accident, he roasted a whole celeriac and left it all night in the oven. In the morning, seeing the scale of the disaster - basically, a black, burnt piece of root vegetable - he still scooped up the inside and ate it. It was delicious ! The celeriac texture is now an ingredient of one of his signature dishes, the chawanmushi, a Japanese savory egg custard. « The storytelling is a part of the experience », he emphasizes, « Your mind changes what the palate feels. Storytelling gets you hungry, emotional. Excited ».

Considering the number of local socialites leaning against the glamorous dining counter, or lingering on the first floor’s speakeasy for a cocktail prepared by an ex-chef turned mixologist, in less than one year after its opening in May 2021, Rumour seems to be living up to its expectations : it’s making Budapest excited… and exciting.

Budapest Chef Michelin Guide
All articles of Dining Out