The image of Amsterdam as a wonderland of legal vice gives it a tint of irresistibility. The Netherlands has never had time to punish things as trivial as marijuana (today) or anabaptists (half a millennium ago). They’ve been too busy building dams and dikes and saving their land from slipping into the ocean. The very concept of liberalism is said to have taken root in this city. The first stock market, too. And if the idea of gedogen — the official non-enforcement of certain laws most famously applied to coffee shops and red light districts — finds its roots in the ancient Dutch war against the sea, the country’s mercantile Golden Age only further cemented the setting aside of certain moral subjectivities in favor of cooperation.

By the 1600s, Amsterdam had vaulted into unparalleled commercial success. But while other cities in Europe spent the century building Baroque palaces and castles for nobles and royals, in Amsterdam a massive amount of wealth remained within the merchant class. Funded by spices and other riches from around the known world, these residents underwent a massive endeavor to expand their booming city — for themselves. As a result, Dutch Baroque architecture was more sober and restrained compared to the ostentatious, ornamental version sweeping the continent. That’s evident in the city’s famous canal houses, where function needed to be just as important as form. 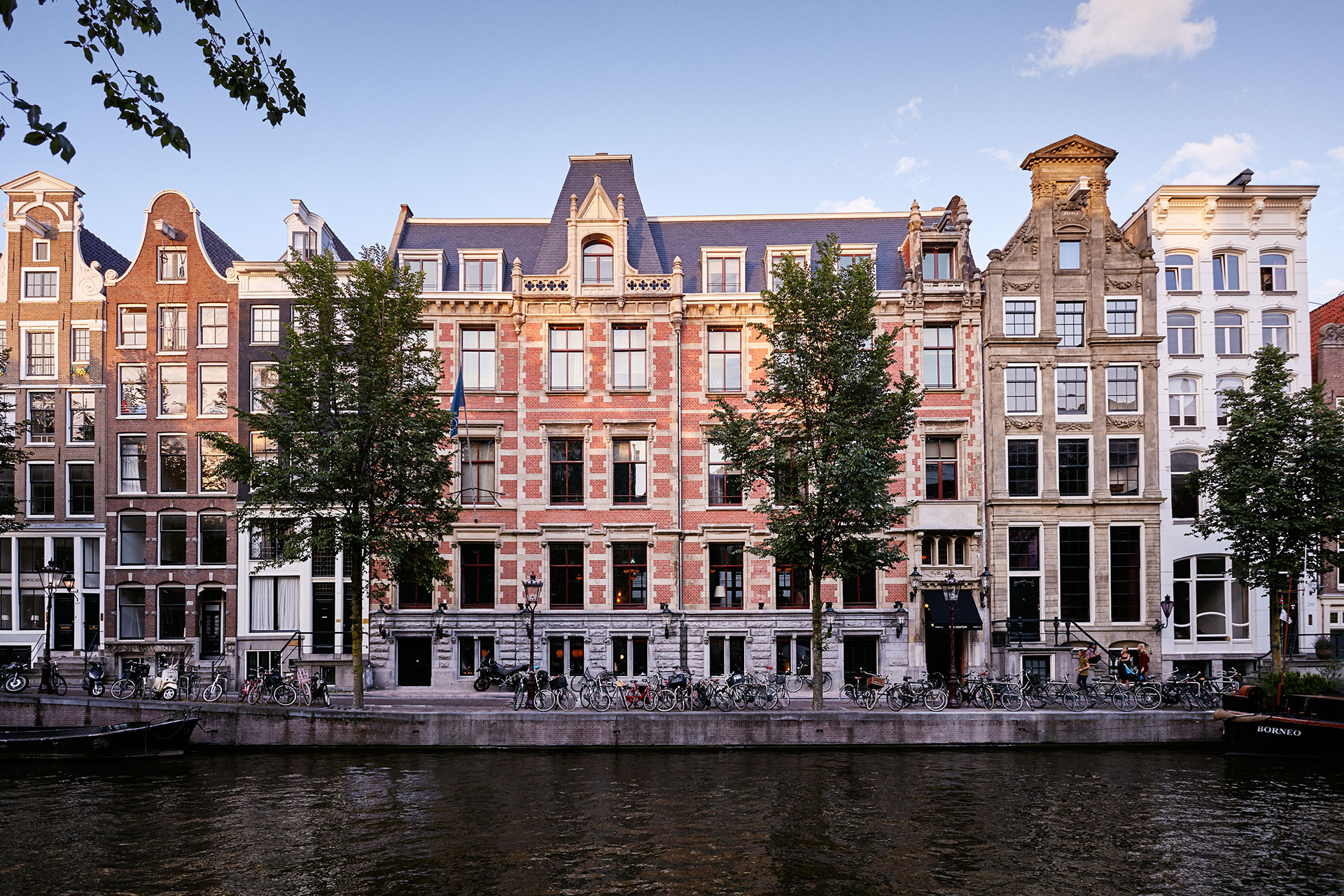 The canal houses weren’t just homes. They were simultaneously warehouses for all kinds of inventory. A merchant with a canal house “could sail from China or Japan to Amsterdam and enter his front parlor and the bosom of his family almost without touching solid ground,” writes one city historian, Russell Shorto. Upper floors would hold the goods brought back home, while a hook at the top of the building (still there if you look up almost anywhere in Amsterdam) hoisted them just off the boat to bypass the narrow, barely functional staircases that gave the house itself more space within.

The homes they built in those years still stand. There’s hardly an architectural form more associated with its place. The narrow, sometimes crooked canal houses reflect in the dark water at night, their ornate facades and quaint gables a surreal picture painted on gently flowing canals. Time has only improved them. Today, the canal houses sit on the most enviable real estate, each a window into Amsterdam’s past and present. For a visitor, there’s no better place to feel the soul of the city. 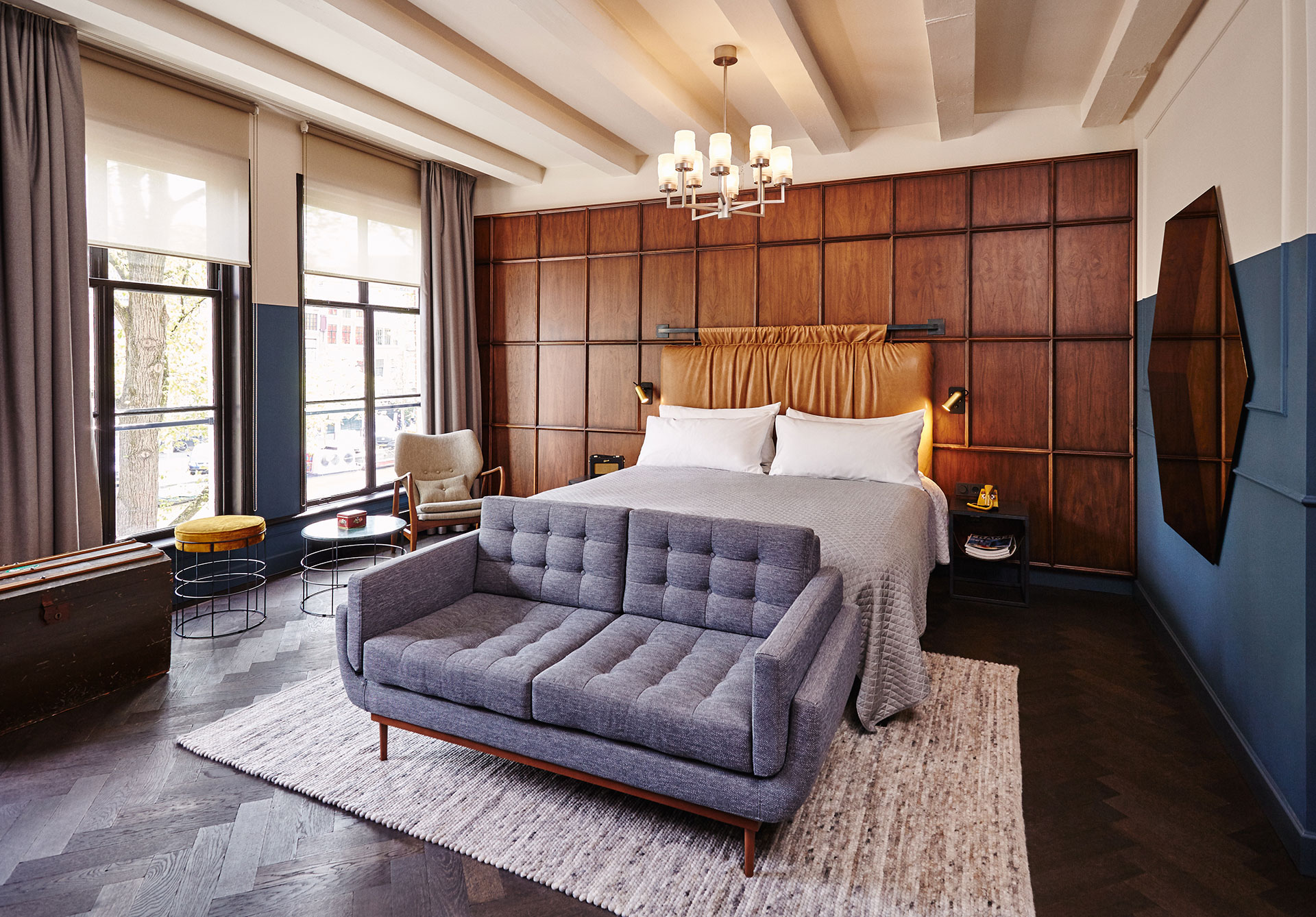 Our most classic canal house hotels sit alongside the three main canals, all clustered within a ten-minute walk of one another. The Prinsengracht, Herengracht, and Keizersgracht — dredged by hand for the city’s well-coordinated expansion in the first years of the 1600s — were so named to to best lure wealthy traders. The Prince’s Canal, Gentleman’s Canal, and Emperor’s Canal sweep around the city, built in conjunction with some 3,000 canal houses for the upwardly mobile and thriving merchant class. 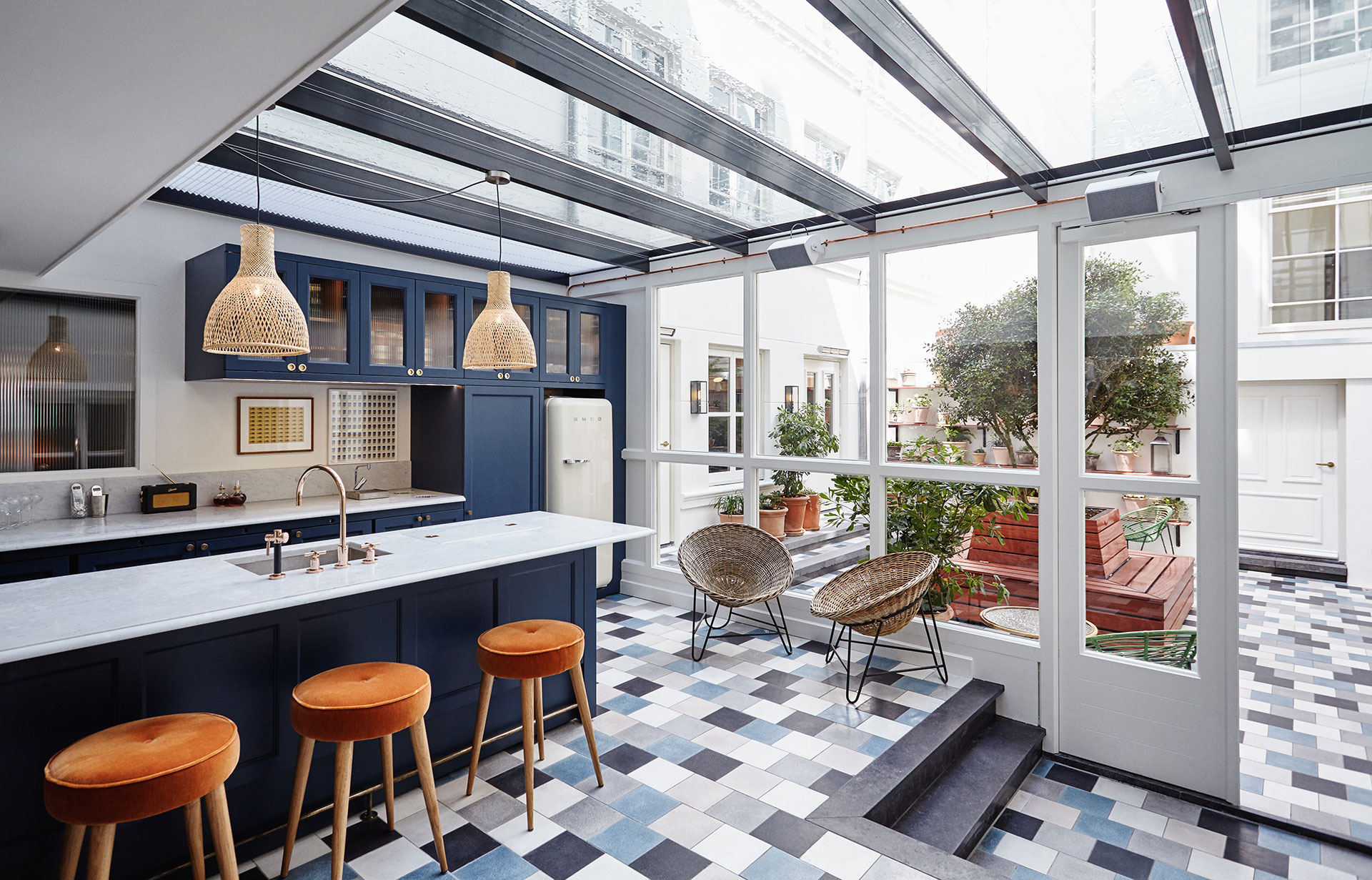 Today, the deep plots, spacious rooms, and backyard gardens that defined these hybrid personal and professional spaces have been put to extremely creative use. The undeniably gorgeous facades speak for themselves. It’s the idiosyncrasies within that set them apart. At The Hoxton, Amsterdam, a collection of five canal houses strung together, you get the distinct feeling you’re being sized up at check-in. In fact you are. Any guest taller than the average 17th-century merchant is quickly reassigned from the low ceilings of the fifth floor. Walk along its corridors and you’ll feel certain sloping inconsistencies in the floorboards beneath you. The Hoxton could have fixed these during renovation, but perfection is far from the point at a canal house. They’re old buildings, with old quirks — despite the polish of a luxury boutique, it’s the failures that root them in place and recommend them to visitors who want something realer than a chain hotel with a gym.

To that end, rooms at the Hoxton span from attics under original beams to larger spaces with timber herringbone floors and nods to one of these old buildings’ use as the former mayor’s residence. None of this is to say the Hoxton, or any canal house hotel, feels at all worn. The giant, gleaming, modern lobby spans the width of the large front building and fills it with the public spaces the brand is known for, including a bright and buzzing restaurant filled with guests and locals alike. 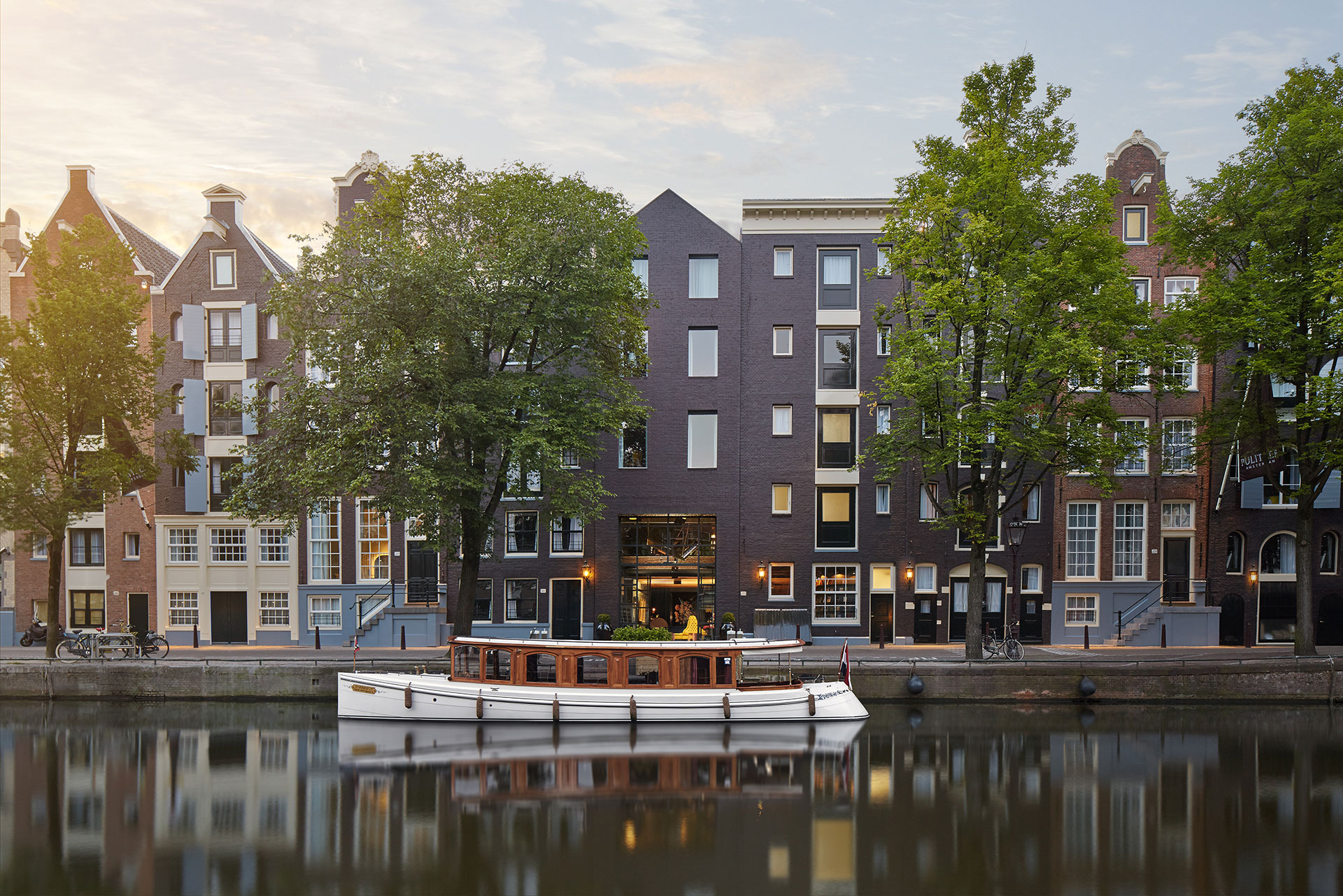 At the Pulitzer Amsterdam, a maze-like collection of 25 connected homes and the largest canal house hotel in the city, references to old history prevail everywhere under the thick sheen of high-end comfort. The frequently changing color of the walls and carpets is a winking indication every time you cross the threshold from one original canal house to the next, and the rooms revel in the glamorous history of the Golden Age. The hotel imagines some of its previous tenants in the Extraordinary Suites — rooms that take their decor from characters like the Book Collector, whose room contains so many books that some form a kind of arching doorway. In other rooms, historical connections are simpler. The wooden headboards reference the distinct gables of the canal houses. 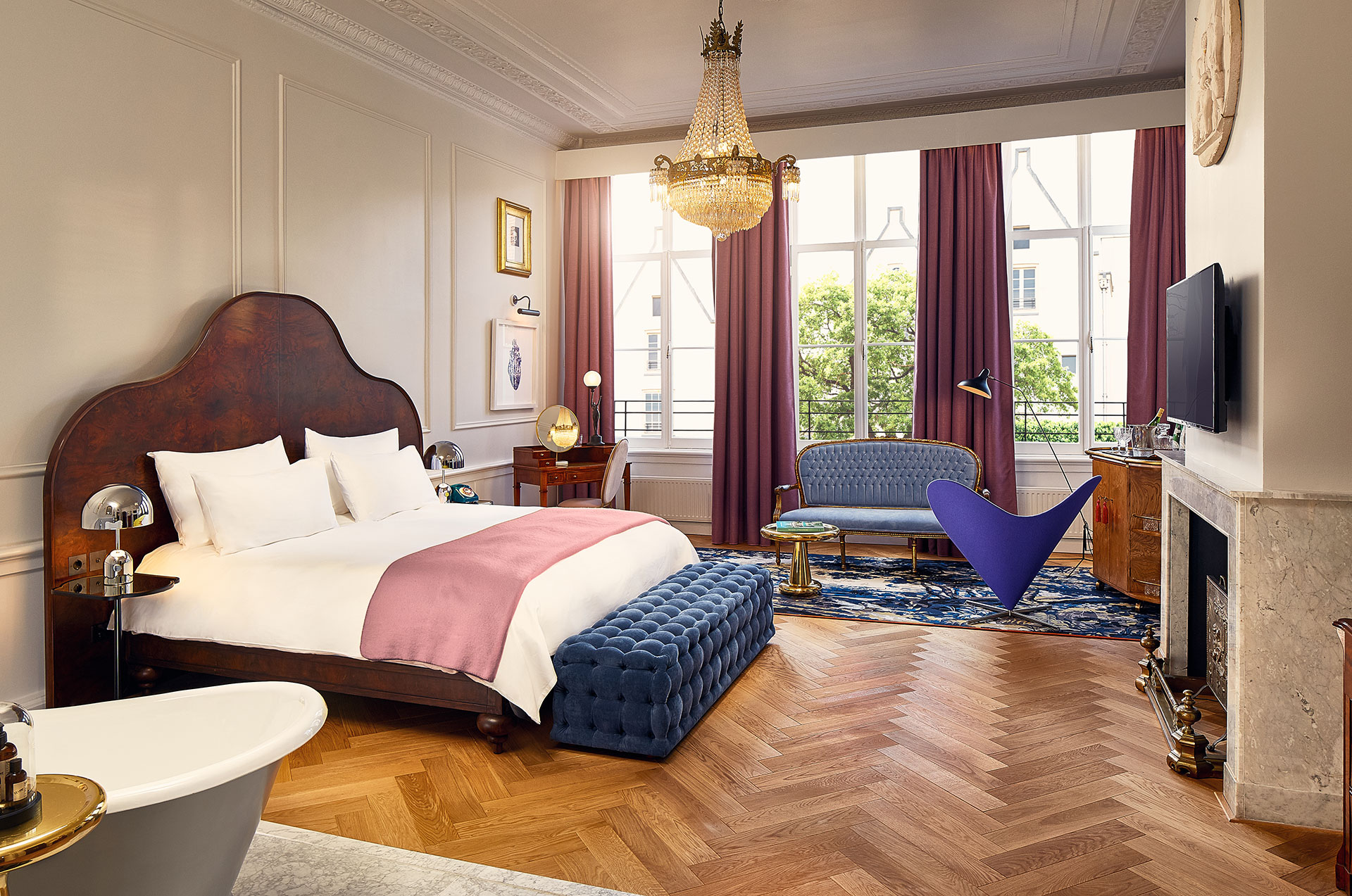 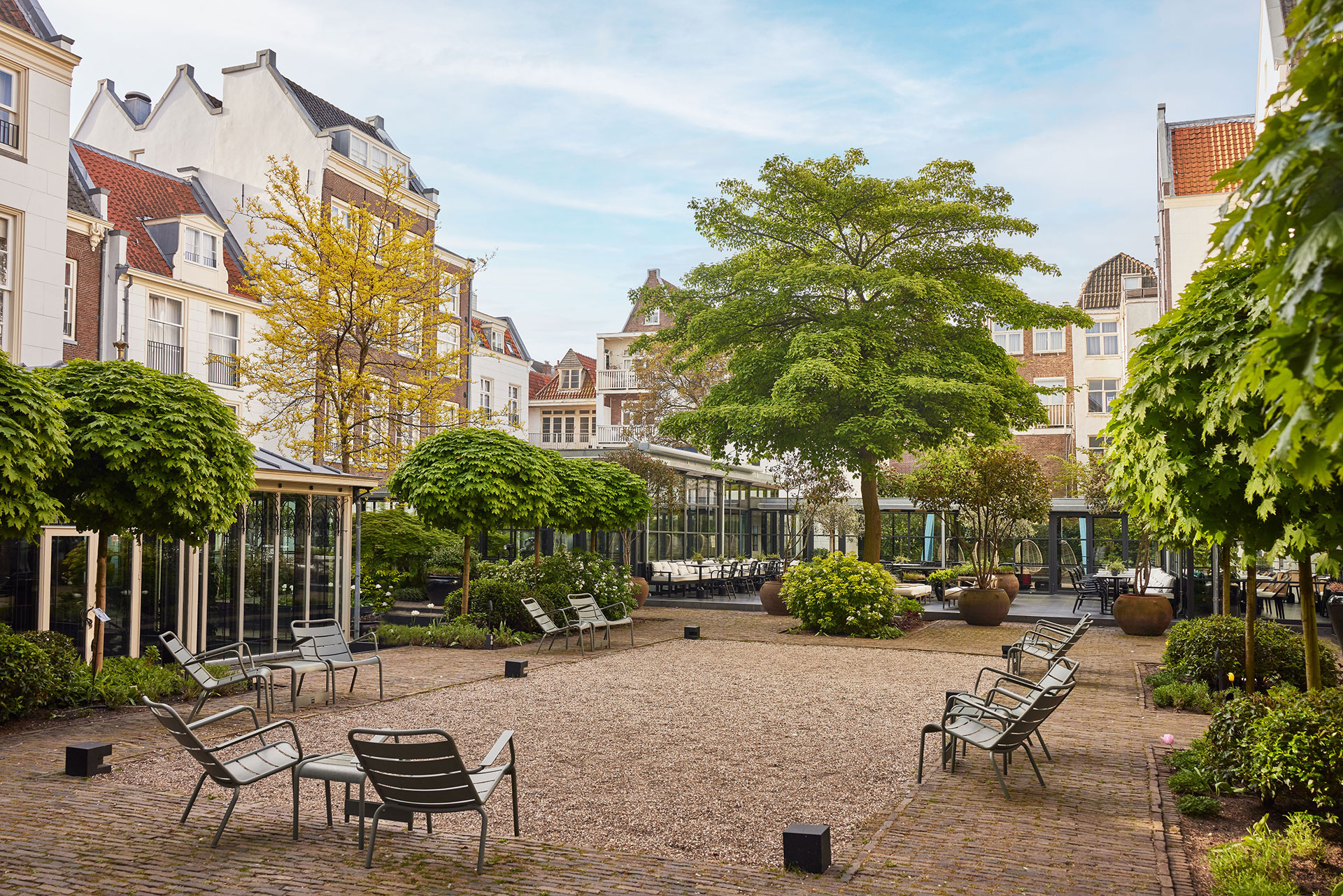 The Hoxton and Pulitzer feel like large hotels, but no matter how many canal houses are strung together, the fact that these were family homes gives the spaces — with their long windows and original details — a cozy feel. At each, the experience is in some ways a mix between the hominess of a bed and breakfast and the luxurious anonymity of a full service hotel. On the Keizersgracht, two of Tablet’s smallest canal house hotels sit just a few doors down from one another. Both dating to the 17th century, the Toren and the simply named Canal House each offer guests a charming front lobby and the peaceful, green backyard garden typical of these buildings.

“I wanted to capture the history of the buildings, but also of the trade that made the Netherlands so successful,” says Jessica Frankopan, founder and designer behind Canal House. Her hotel is filled with paintings and portraits that mix nicely with the dark and contemplative decor of the 20th-century Dutch designer Marcel Wanders. “I wanted it to feel as luxurious as it would have been in the glorious 18th century when fabrics were being brought back from all over the world.” 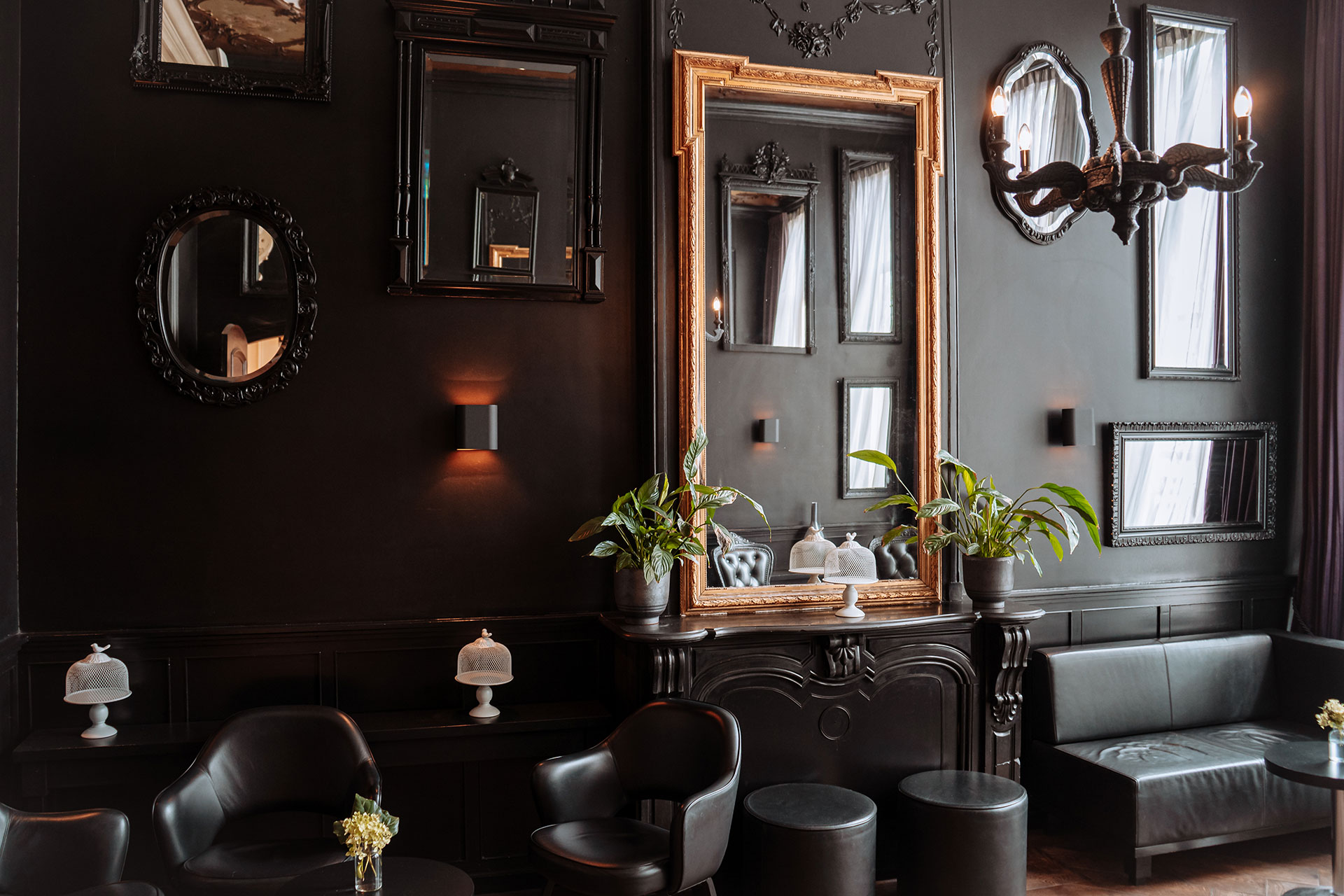 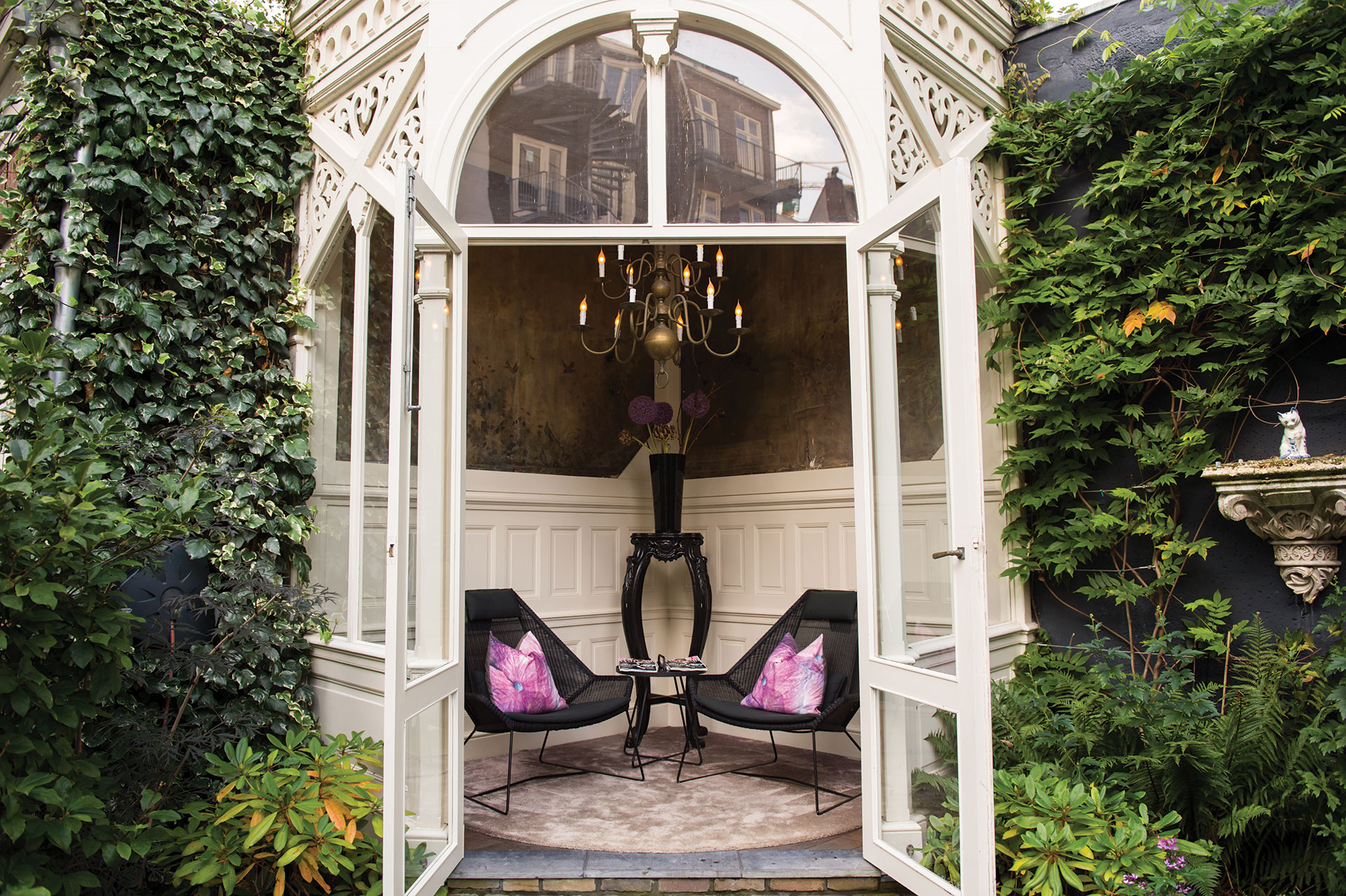 The experience at each canal house is unmistakably current. But these are places where the foundation of the house itself maintains the roots of the city. It’s not hyperbole. The canal houses rest on mud and sand dug up from the new canals, and below that rests a pile of wooden stakes driven into the soggy peat, the work of 17th-century immigrants fueled by beer and rowdy time-keeping songs. Some twelve miles of land is solid today thanks only to the Golden Age expansion. The sea itself made way for these houses, and without them, much of Amsterdam itself wouldn’t exist. When you know that, the past can’t help but bleed into your breakfast.

Overlooking the garden from a table filled with stroopwafels and croissants at the Canal House Hotel, it’s difficult to resist imagining yourself as a bourgeoise Amsterdammer from the 1600s, your cabinet full of trinkets brought back from around the world, your canal outside a portal to places far-off and exotic. Because for all the history and architectural delights, the one thing that unites each canal house is simple. A thousand words later, our recommendation is simple. Get a room with a view. 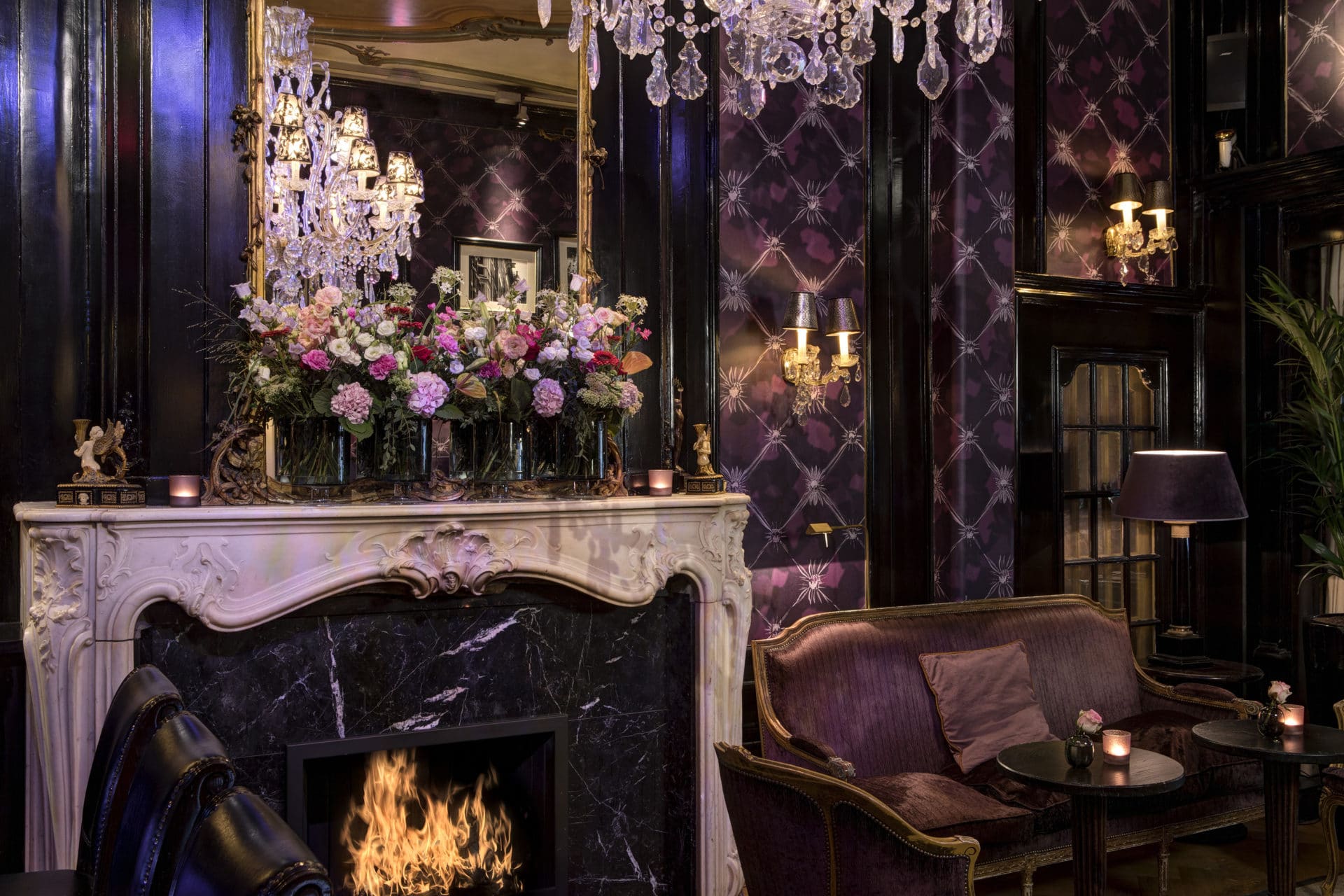 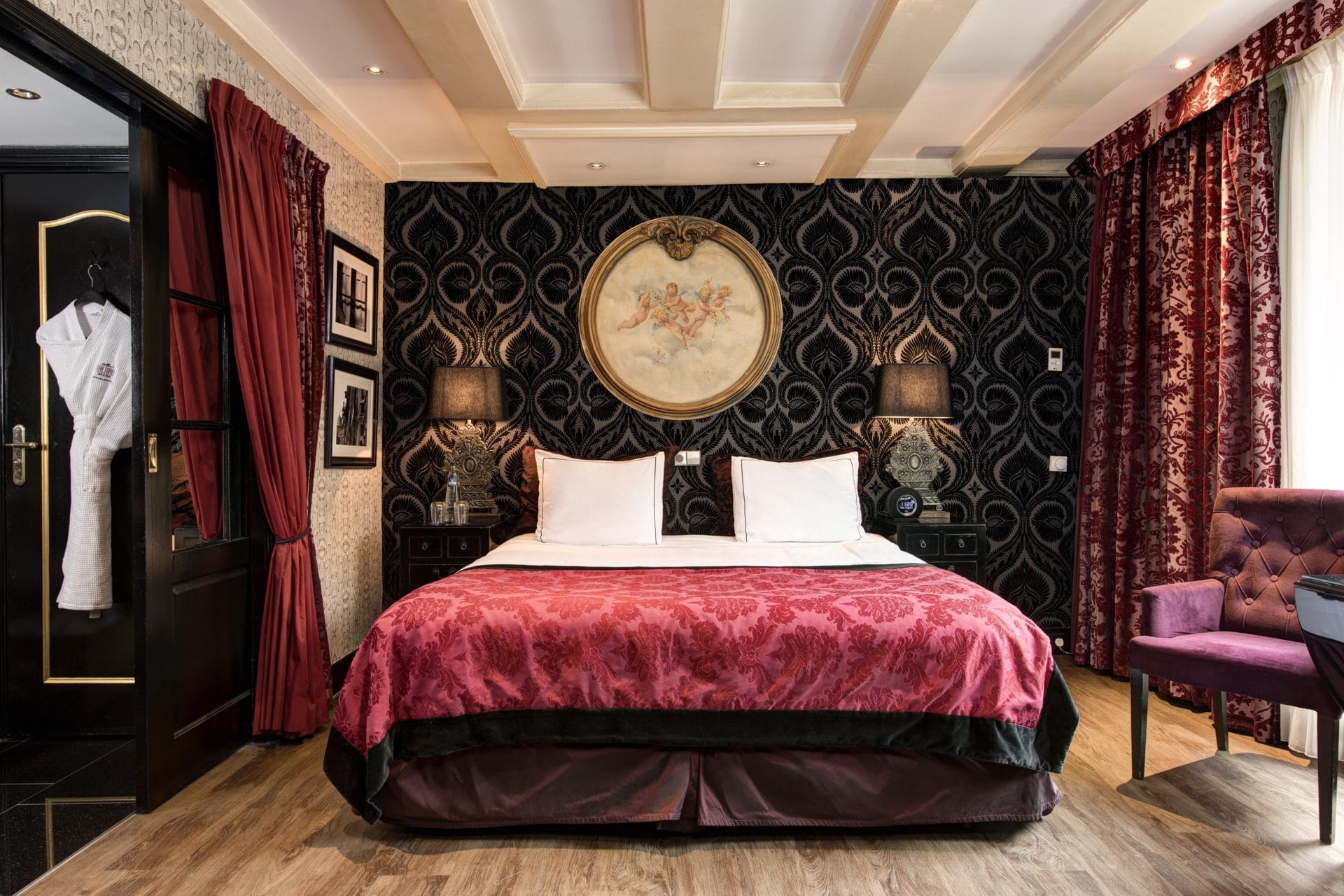