It’s the end of the year, which means it’s time for the year-end “best of” lists. The last 12 months demand to be characterized and categorized — frozen in amber and made easier to remember. We’re happy to do our part.

We’ve sifted through every hotel added to our selection in 2022 and picked the places we think have the best overall designs. The hotels we’ve chosen are multi-dimensional, notable for their interiors, exteriors, and how well they commune with their location. They’re uncompromising and unafraid, each one crafting their own bold direction and sticking with it consistently throughout the property. That’s what we expect from great hotel designs.

Every hotel we feature must already have an exceptional design to match the high quality of its service and the value it brings to its community. But we managed to narrow things down, training our focus on hotels that are practically dripping with personality and singular styling. Enjoy. 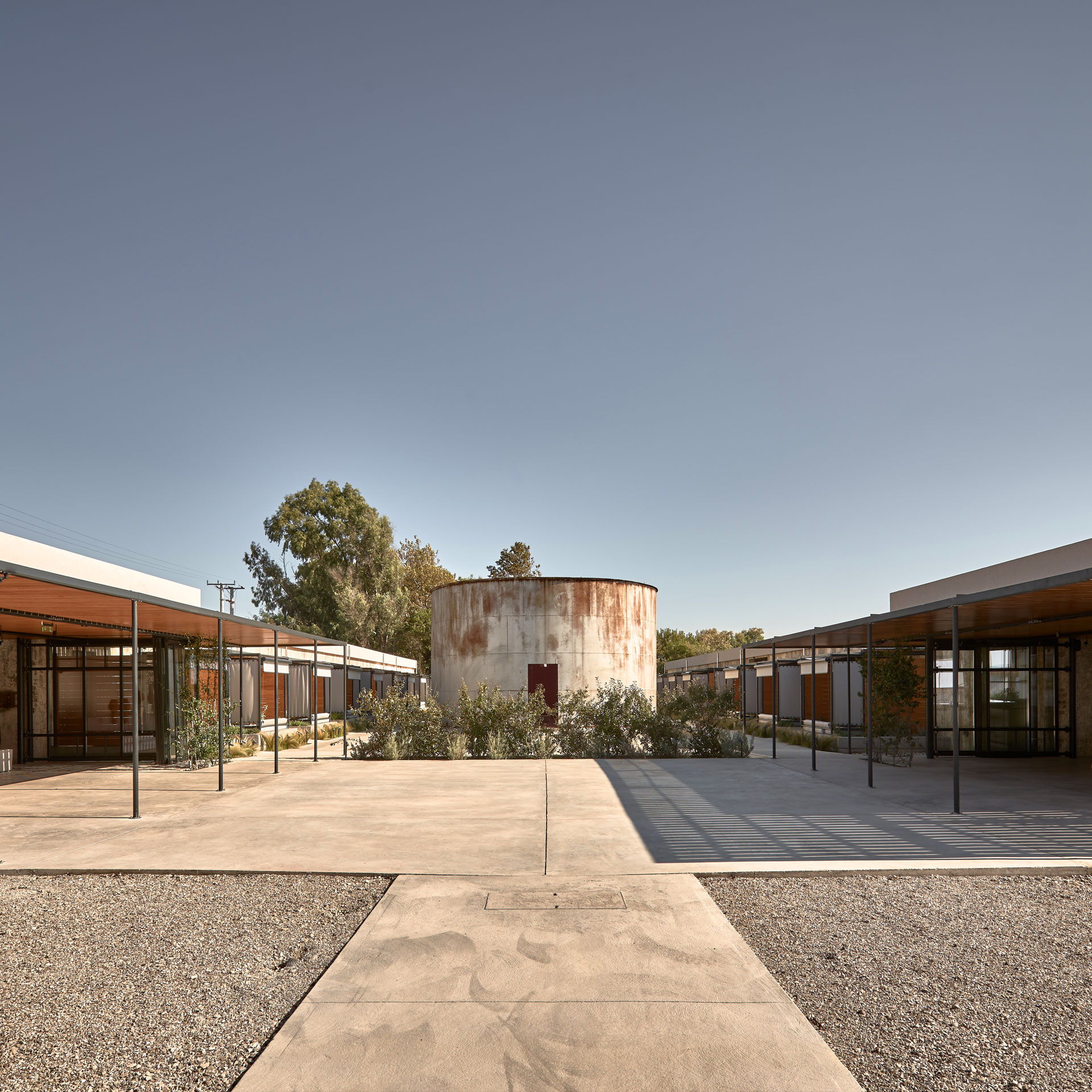 Amaliada, Greece
Once a winery, this beachside plot in the western Peloponnese has found its true calling, its weathered century-old concrete forms converted into the stunning, industrial-chic Dexamenes Seaside Hotel. Owner Nikos Karaflos and architects K-Studio have achieved maximal effect with light-handed interventions, removing the winemaking machinery and converting the concrete storage tanks into rooms. From US$153/low season; from US$240/high season 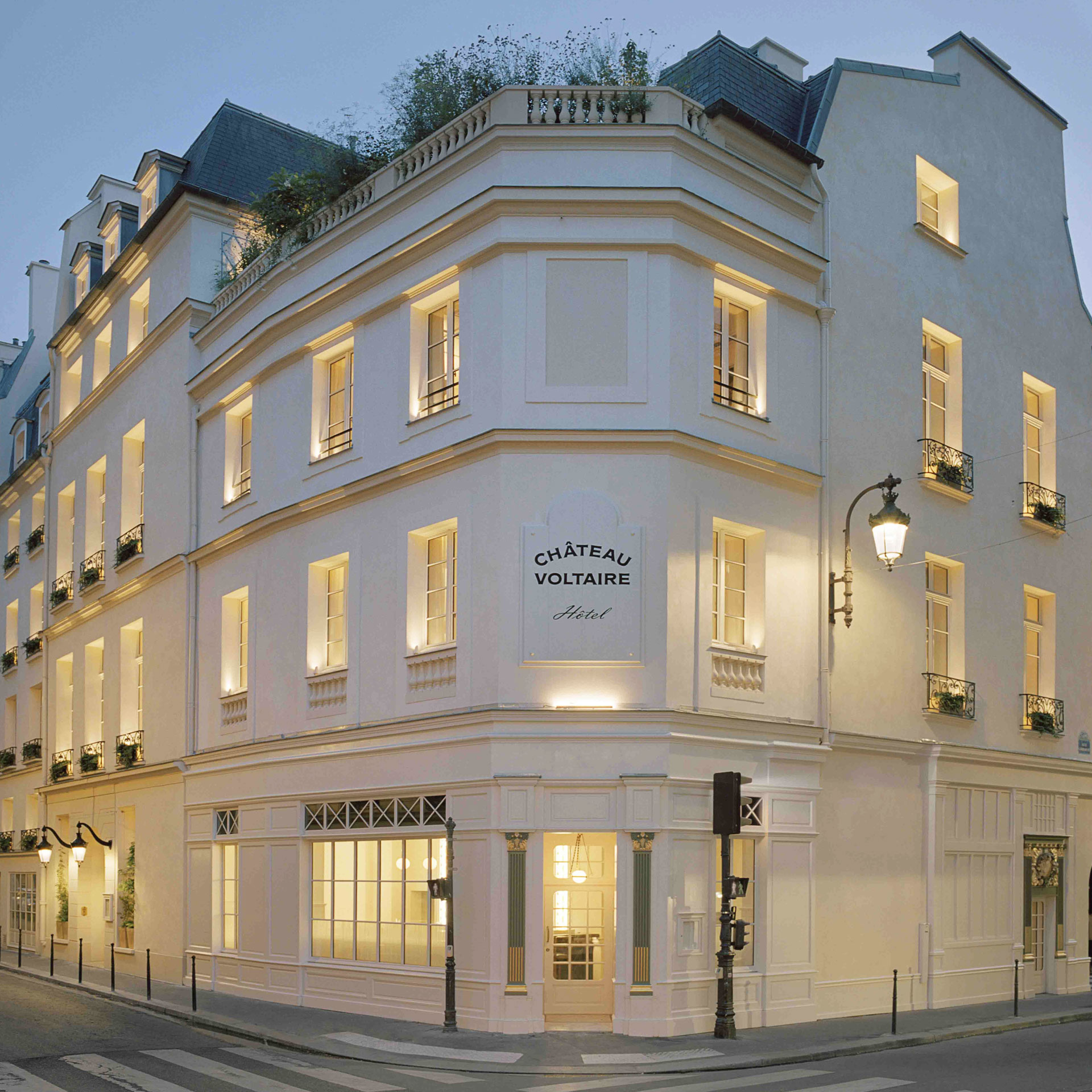 Paris, France
The ultra-chic Château Voltaire is named for the fashion brand Zadig & Voltaire, for which hotelier Thierry Gillier is better known. For this venture, Mr. Gillier enlisted creative director Franck Durand and the Parisian architecture studio Festen to translate his aesthetic into a hospitality language, and the resulting hotel is every bit as stylish as its star-studded genealogy would suggest. From US$637
Eat nearby: At L'Oseille, the chef’s concise menu of traditional French cuisine takes you on a whirlwind of flavours, always in tune with the seasons. 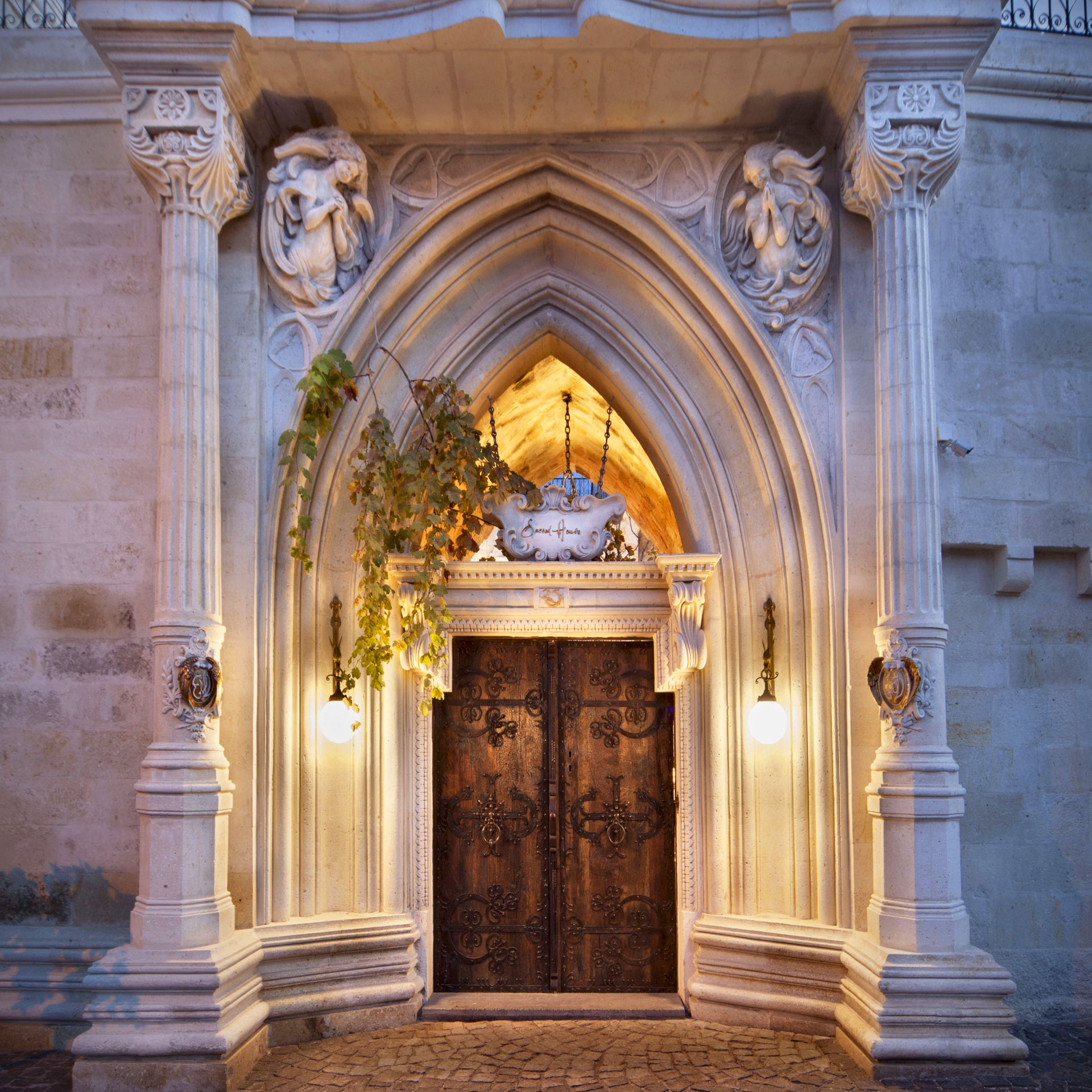 Ürgüp, Türkiye
After a stunning renovation a handful of years back, Sacred House returned to our selection in 2022. The mansion is two and a half centuries old, and was for a time a Christian church, as the name may well have led you to guess. Though it was restored from near-ruin within living memory by its present owners, at times Sacred House feels authentically medieval — antiques abound, and bare stone walls go a long way in setting a mood. From US$375 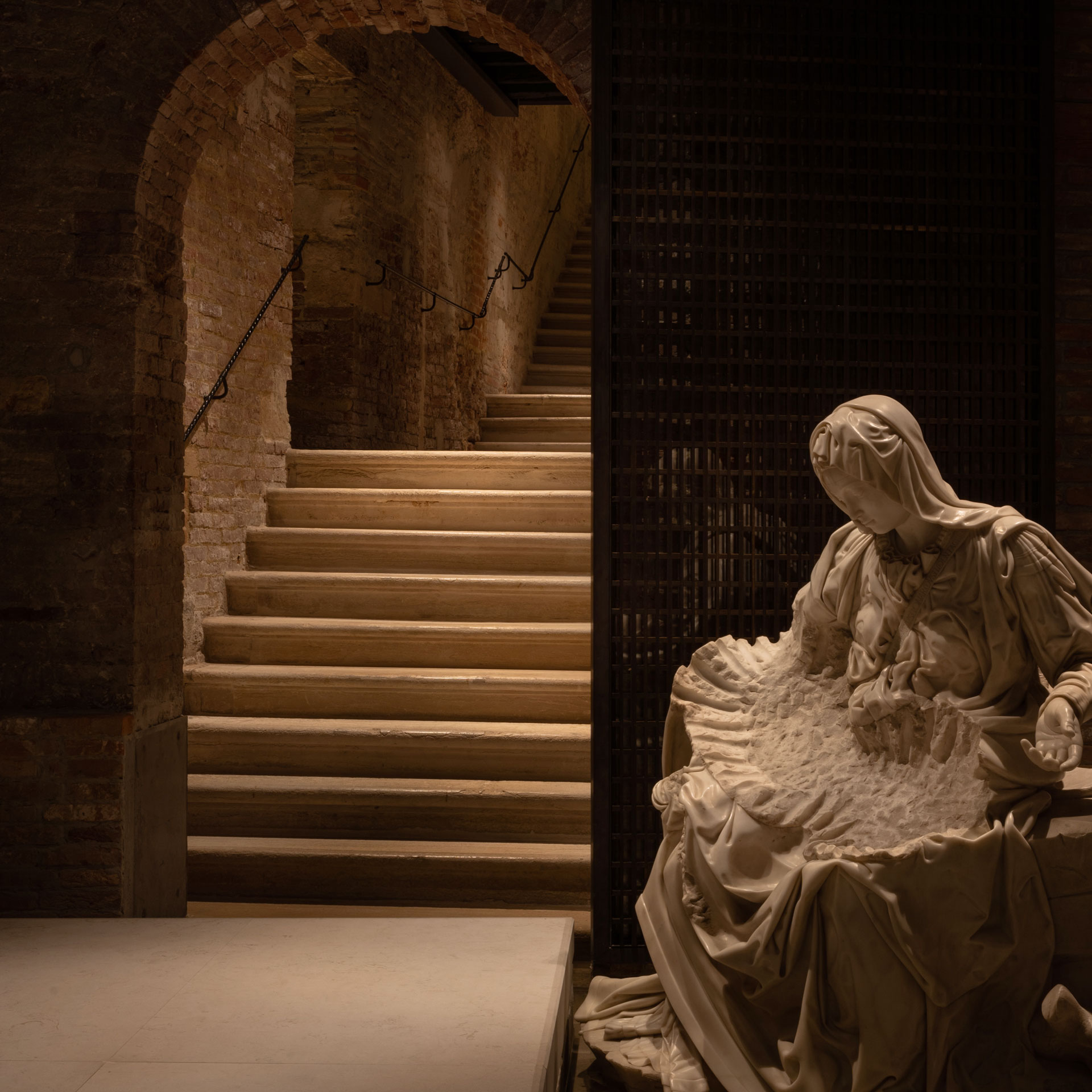 Venice, Italy
The owners of Venice Venice took inspiration from the avant-garde spirit that’s always been an integral part of Venetian life. While the historic structure remains immaculately preserved, the hotel is not a Renaissance period piece. Venice Venice is connected more closely to the Venice of the Biennale, and is furnished and decorated with design pieces and artworks from a number of disparate movements. From US$562
Eat nearby: Within the Fondaco dei Tedeschi, once a type of stock exchange where merchants from northern Europe traded with their Venetian counterparts and now a luxury shopping centre, Amo serves Mediterranean fare with stunning views of the Grand Canal and the rooftops of Venice. 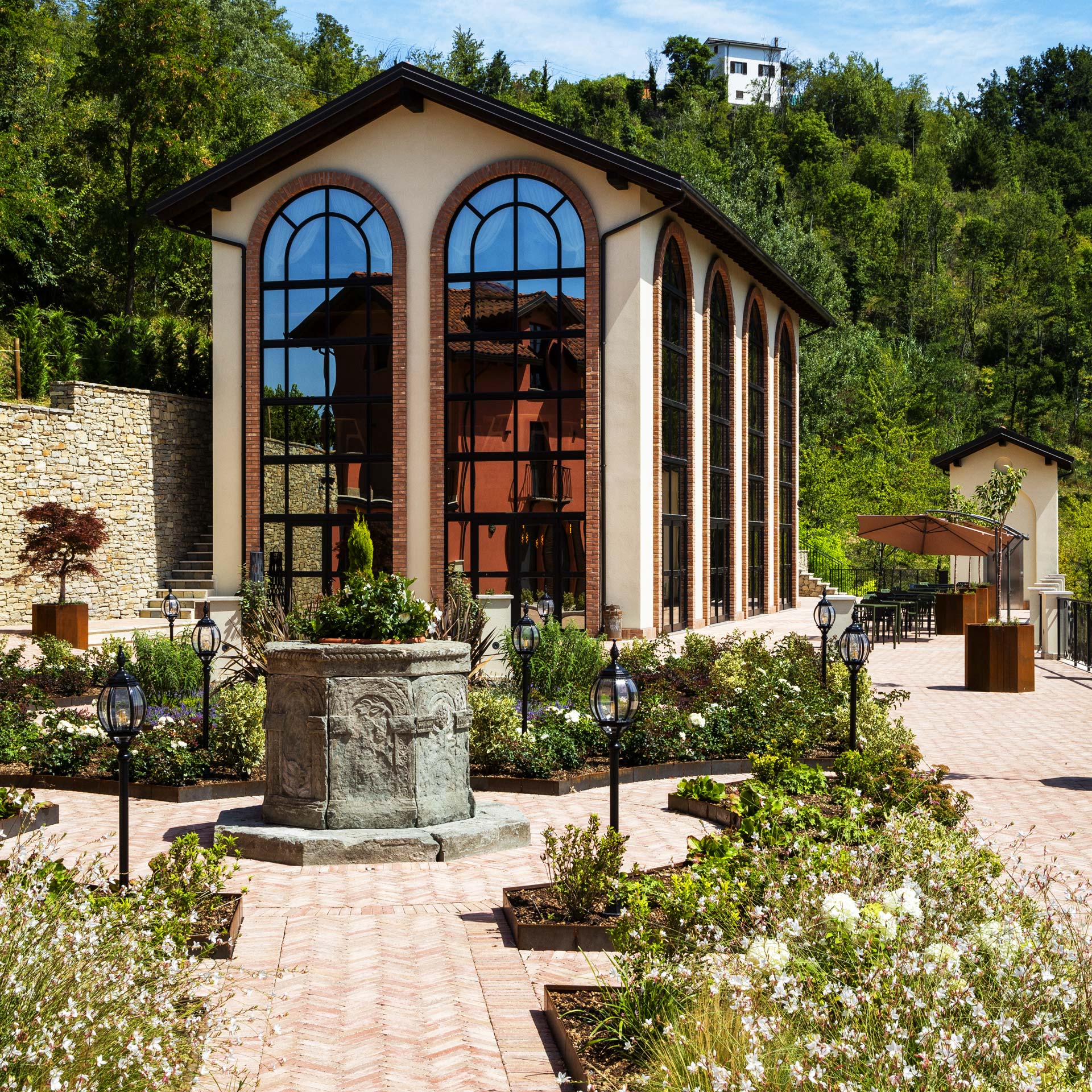 Cremolino, Italy
It’s hard to imagine a hospitality experience much more delicious than a farmhouse hotel in the hills of Piedmont. Nordelaia begins with an 800-year-old farmhouse, extensively reimagined by the London-based design studio These White Walls. The result is still beautifully rustic but now also unmistakably modern, full of historical details interwoven with modern fixtures and furnishings. From US$469
Eat nearby: In an enchanting location surrounded by vineyards, Mirepuà Food Lab serves cuisine that is a finely balanced fusion of traditional and innovative styles. The attractive terrace adds further charm. 4' drive from Nordelaia 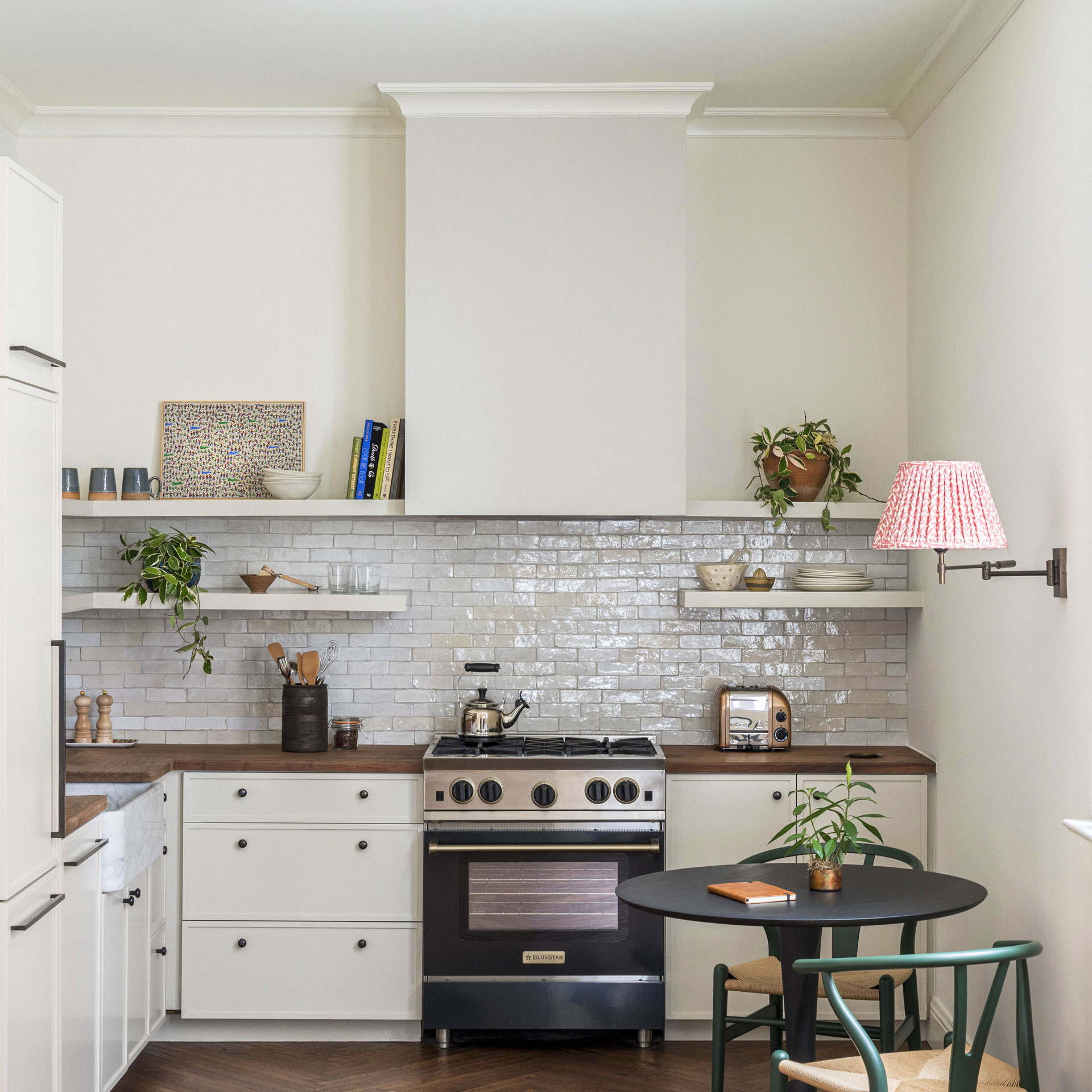 Charleston, South Carolina
In the heart of Charleston, two historic Victorian-era structures and one contemporary one have been unified to create The Pinch. The Victorian inspiration is present throughout with bold wallpapers and period ornaments, yet updated through a modern color sense and eclectic furnishings and artworks. But it’s the supremely stylish kitchens in each room that might be the most impressive part of The Pinch. From US$620 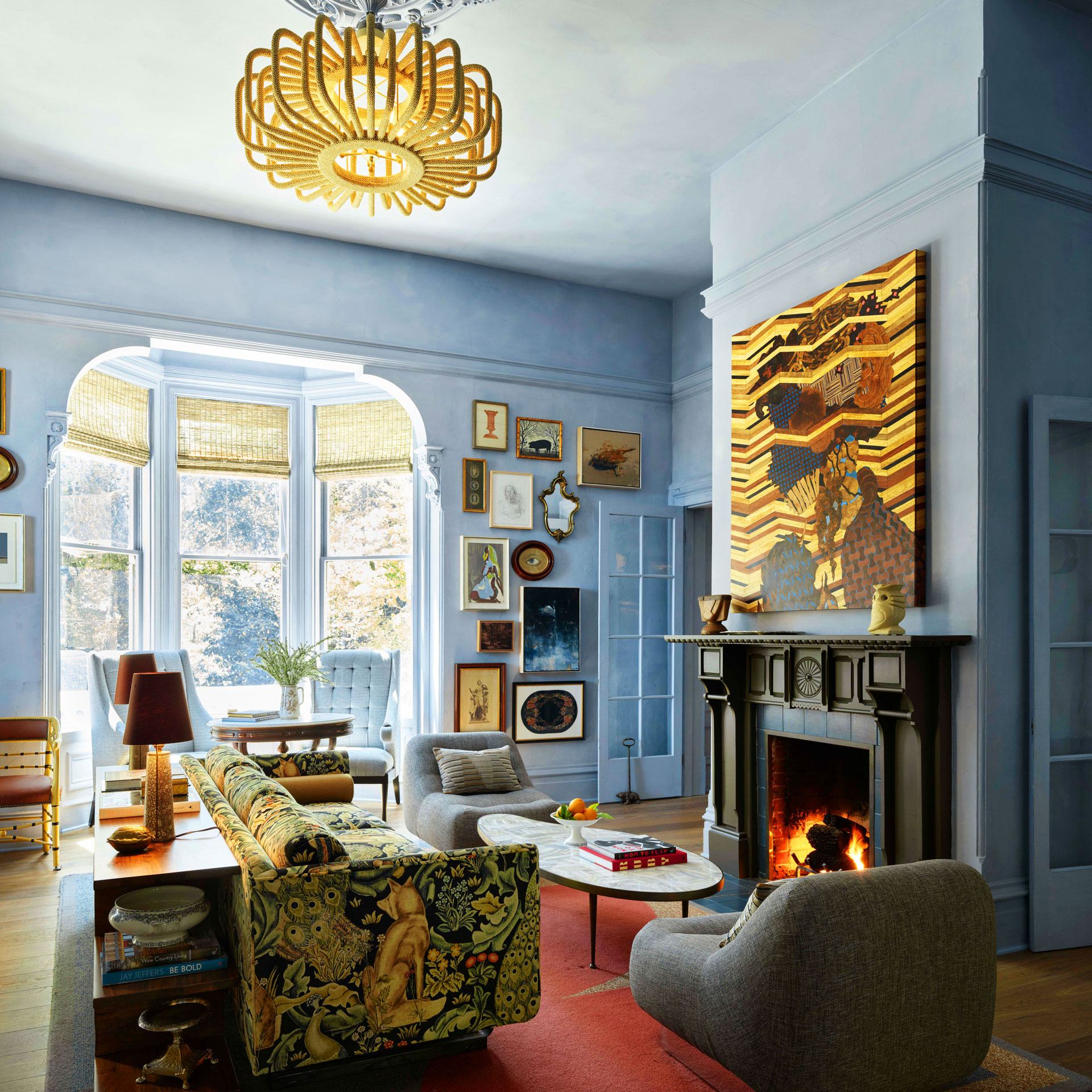 Healdsburg, California
The Madrona may be new, but the Mansion, the hotel’s ornate centerpiece, certainly isn’t — this 1881 mansion was built in Aesthetic Movement style. The interiors done by co-owner and designer Jay Jeffers, are eclectic, incorporating period elements as well as modern interventions, a very fine art collection, and a boatload of antiques collected during several lifetimes’ worth of travels. From US$630
Eat nearby: At the hotel's eponymous restaurant, sip on top-shelf cocktails at the swanky bar just inside the entrance before sitting on the terrace, with its scenic views of the grounds. The menu ranges from a signature dish of fried chicken (Tuesdays only), to more formal dishes like dry-aged Liberty Farms duck breast, which might be accented with herbs and flowers from the property's half acre of gardens.

Subscribe to our newsletter to stay on top of the MICHELIN Guide's best restaurants and hotels, recipes, travel stories, and more. 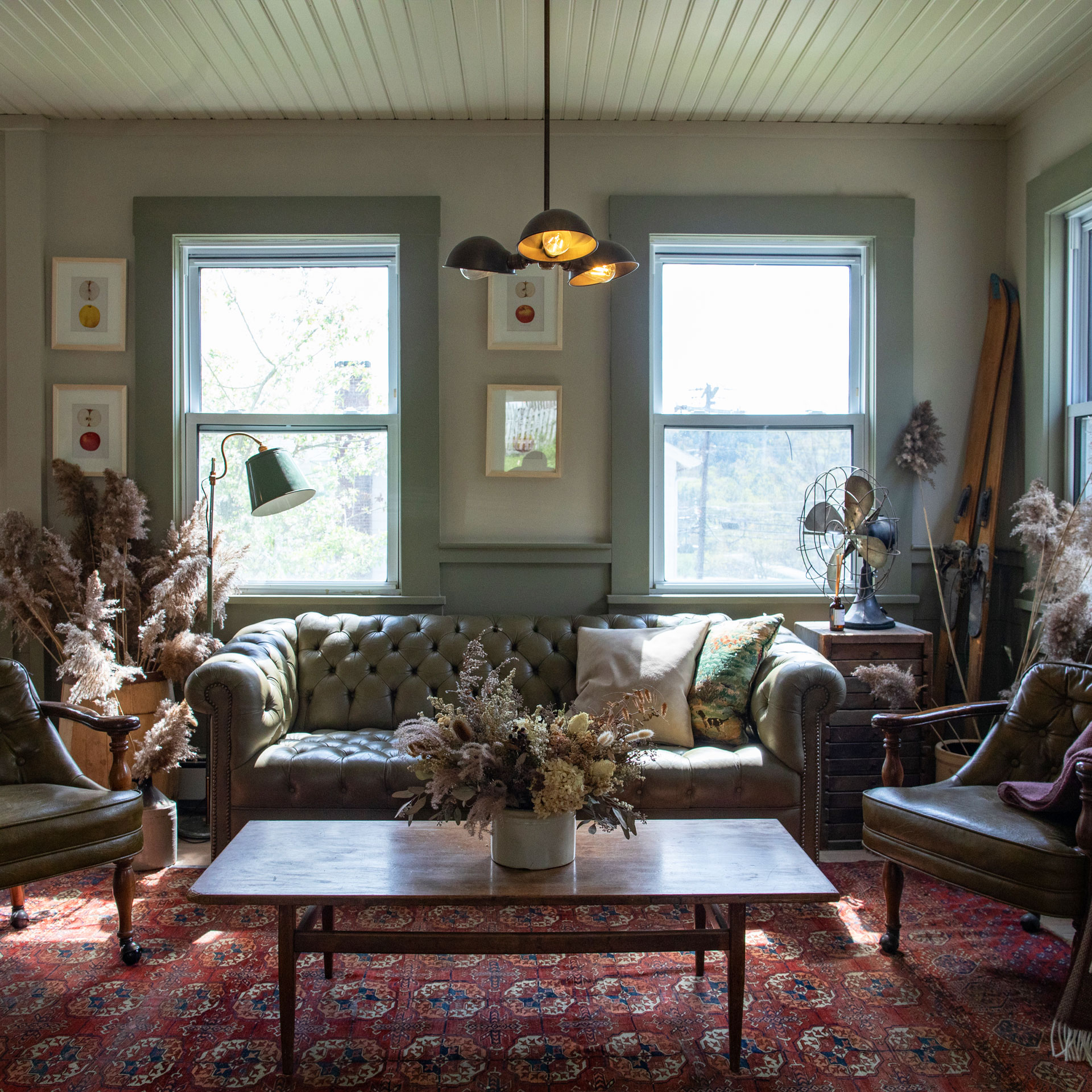 Callicoon, New York
Seminary Hill Orchard & Cidery has drawn attention for its cidery structure, which takes the traditional barn-style silhouette in a modern and sustainable direction. But what brings us to Seminary Hill is a pair of houses renovated by local hospitality experts Homestedt: the Boarding House, a 17-room boutique hotel in a Shaker-inspired contemporary-classic style that’s rustic and restful without being overtly retro. From US$300 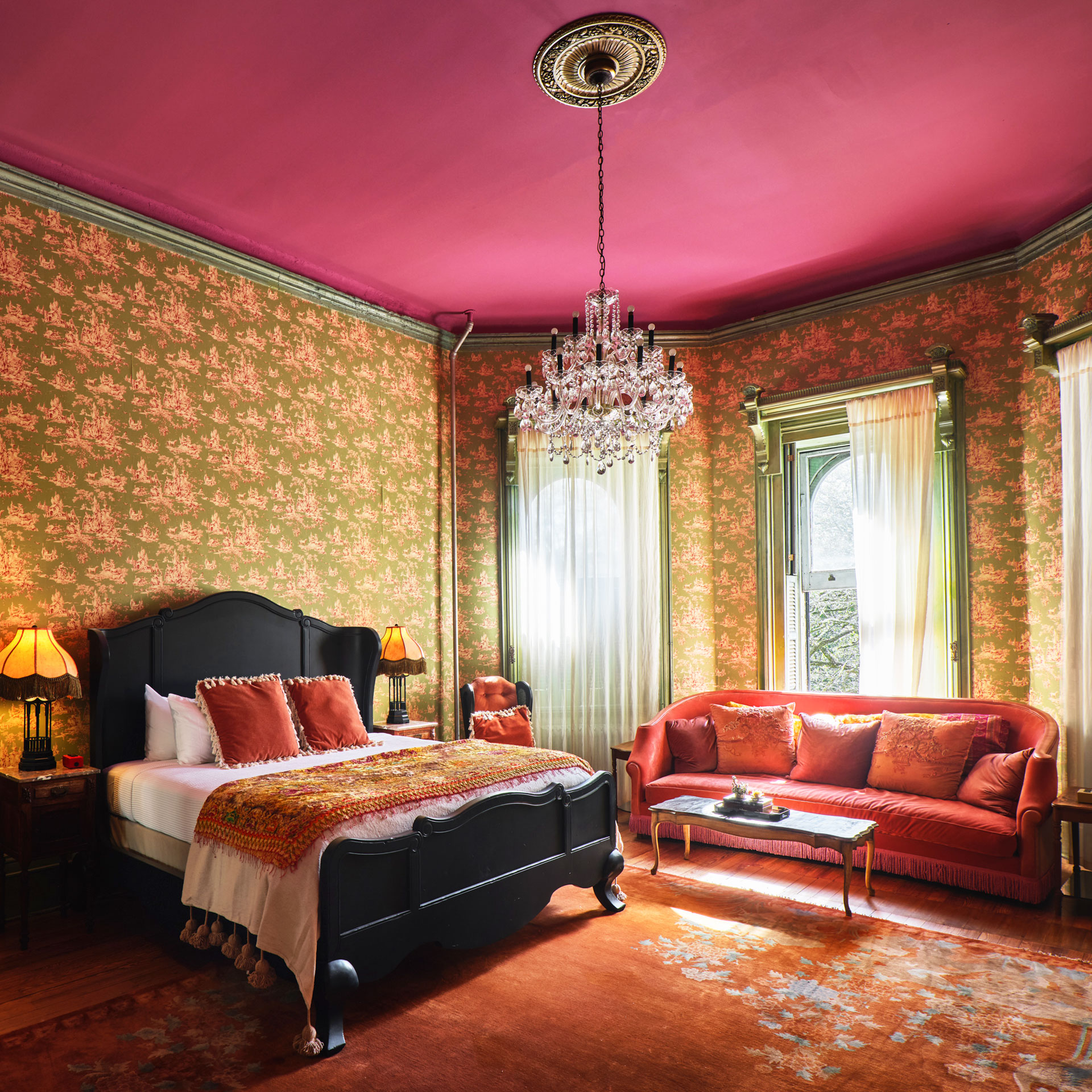 New Orleans, Louisiana
This late 19th-century Italianate villa draws its name from its most distinctive architectural feature. Columns was built in 1883 as a private residence, and after a thorough renovation, it’s a Victorian fantasy world, as ornate and colorful as any hotel in town. Rooms and suites show plenty of variety. All are decorated in a style you could call maximalist, out of eclectic elements that feel more collected than designed. From US$323 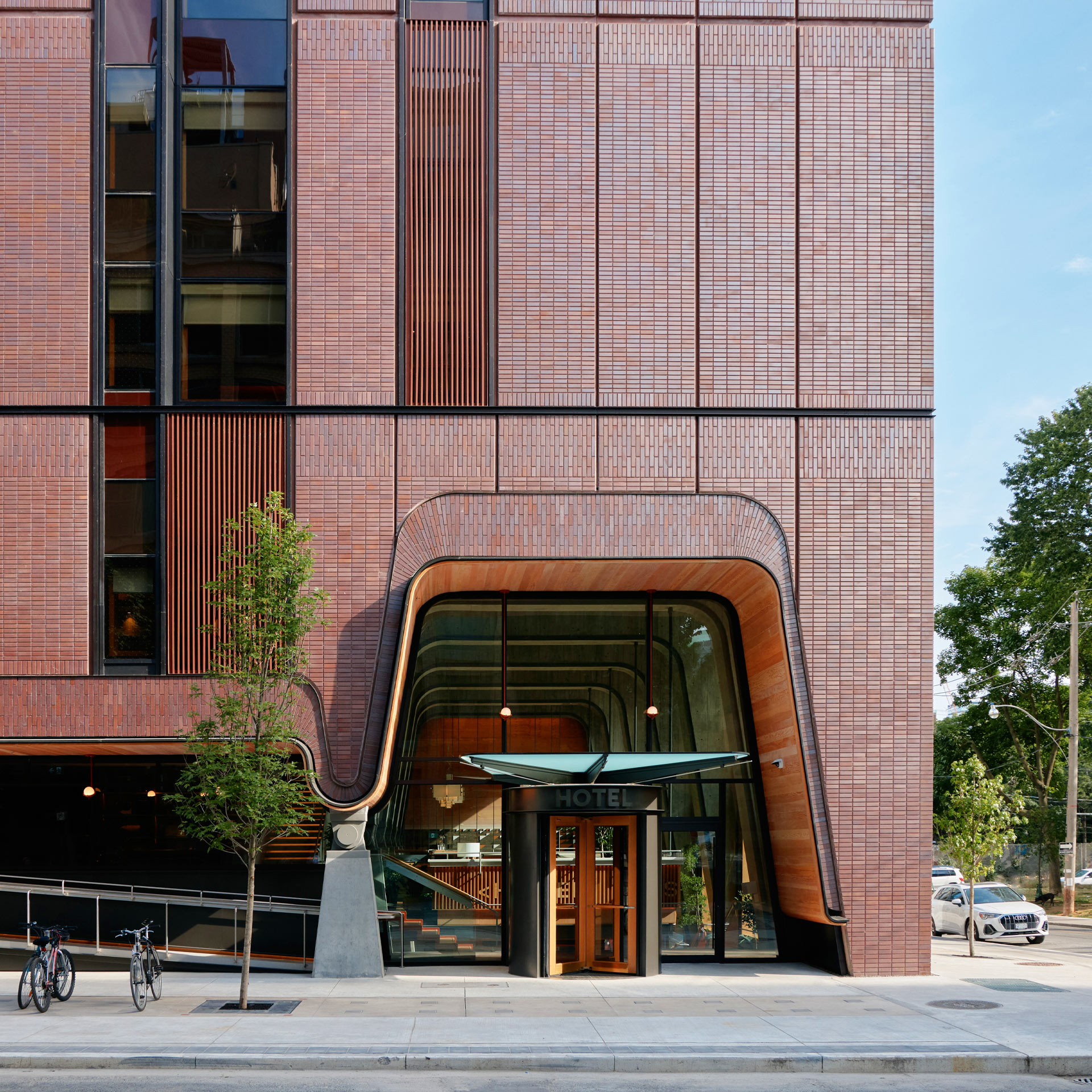 Toronto, Canada
Ace’s first hotel in Canada is a new build, but one with plenty of vintage inspiration, designed by Shim-Sutcliffe Architects and Atelier Ace. The curvaceous brick, concrete, and wooden forms feel retro-futuristic, and the lobby’s floor, if you look carefully, seems to hover in the air, suspended from the ceiling’s concrete arches by judiciously placed metal rods. The hotel is unique, but still identifiably Ace. From US$293
Eat nearby: Every item on Shook's vegetarian-focused menu is cooked over blazing wood-burning pits. Tempeh kofta arrives with pillowy pita dusted with pumpkin seed dukkah and a side of refreshing, house made labneh. A salad of sweet, juicy figs dressed with orange blossom and saffron dressing could easily substitute for dessert. 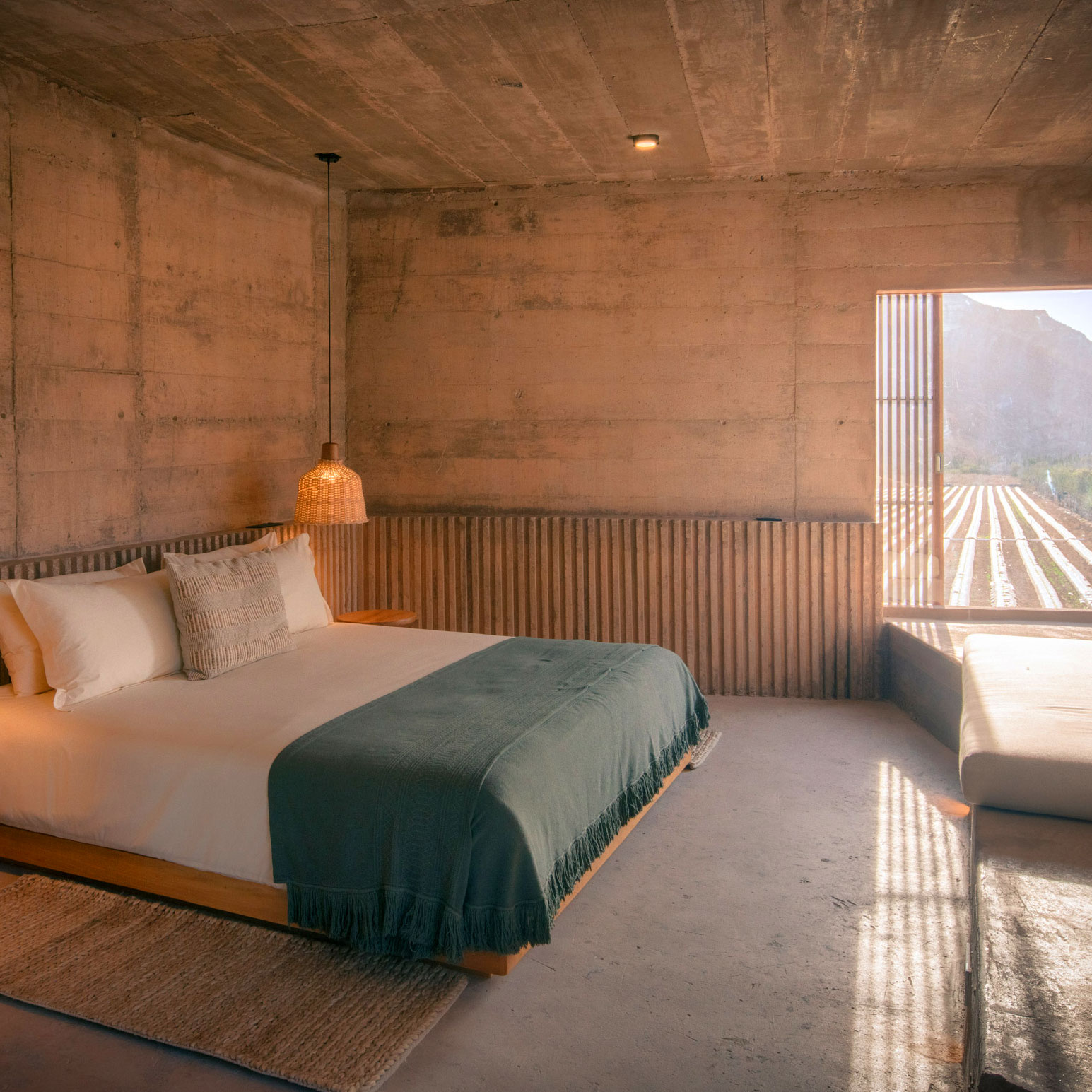 Todos Santos, Mexico
An hour up the west coast of Baja California from the hedonistic holiday hotspot of Cabo San Lucas is a place whose charms are a little more austere, though spectacular in their own right: Paradero Todos Santos. A luxurious all-suite boutique hotel in a highly disciplined Brutalist style seeks, at least in part, to draw the eye outward, to the landscape architecture and the untouched surrounding ecosystems. From US$845 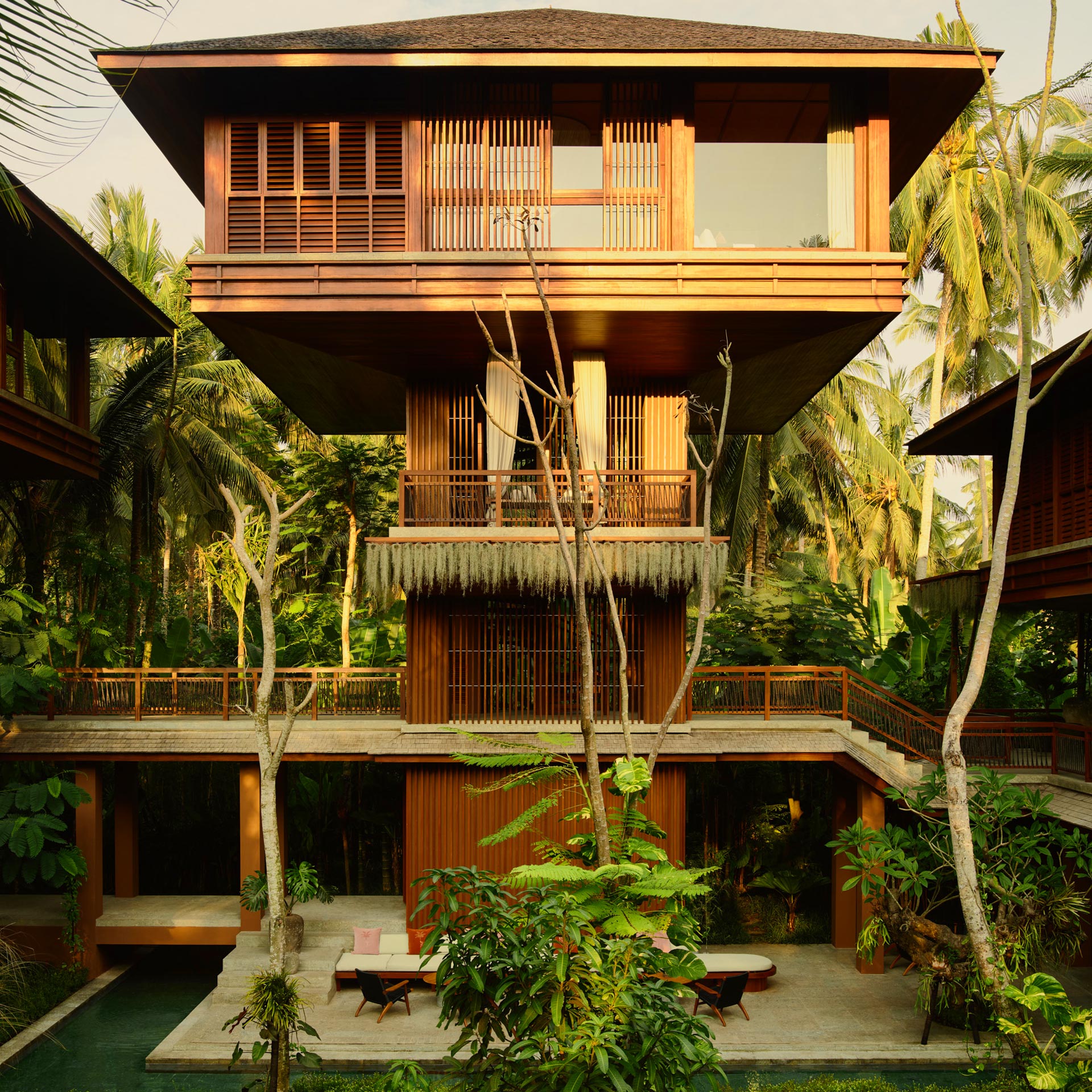 Pekutatan, Indonesia
Lost Lindenberg finds itself on the west coast of Bali in the quiet seaside village of Pekutatan, with the jungle at its back and a long black lava-sand beach right out front. The playful design by architects Alexis Dornier and Maximilian Jencquel, is unusual with a series of treehouse-like towers connected by elevated walkways. The materials are natural, and with just eight rooms, the footprint is impressively small. From US$337 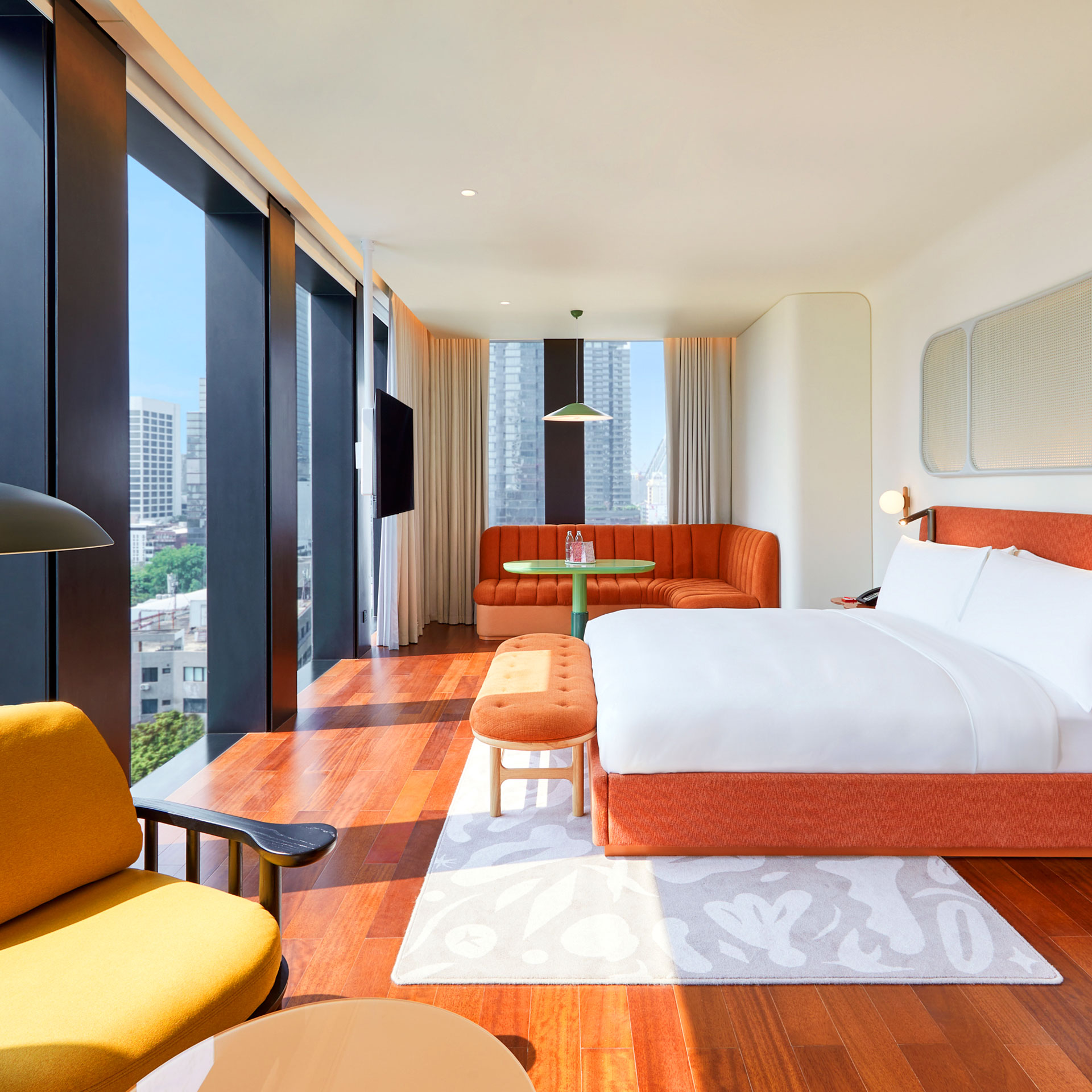 Bangkok, Thailand
Occupying the lower floors of the mixed-use King Power Mahanakhon Building, The Standard Bangkok is a bit of an outlier on this list. With 155 rooms and suites, it’s not an intimate hotel, though it can feel like one. The design, by the Spanish-Italian Hayon Studio, is cosmopolitan in the best way, with rooms that are swanky, stylish, and comfortable — about all you can hope for from a hotel in a spiraling, 78-story tower. From US$242
Eat nearby: Chef “Ton” Thitid creatively re-interprets Thai cuisine at Le Du, with a rotating seasonal menu – the name comes from a Thai word meaning ‘season’. In summer, highlights include their signature Khao Chae, as well as Khao Khluk Kapi; the organic rice, cooked with salty aromatic shrimp paste and pork jam, is served with perfectly done river prawns.