When Joyce Lee and Desmond Tan learned that their favorite Burmese restaurant was closing, there was only one solution: To purchase it. Not only did their local Burmese haunt make memorable food, it felt like a second home, a place where they went on dates, gathered with family and celebrated birthdays. “Being able to go to a restaurant that offered authentic homestyle Burmese cooking was a real treat,” says Lee, who would otherwise only eat Burmese food made by Tan’s mother (who is originally from Burma). “When the restaurant closed, we thought: We should buy it! And eat there for free!” At the time, Lee, who was working as a graphic designer and Tan, who was working as a headhunter, had no idea that their new business would be largely responsible for putting Burmese cuisine on San Francisco’s foodie map.

Lines Out the Door

Burma Superstar has been running for almost 20 years (since Lee and Tan took over), and almost every night there’s still a line out the door. (It landed in the MICHELIN Guide San Francisco edition when it launched in 2007.) Hungry diners have been known to linger for hours, waiting for a seat at one of San Francisco's hottest dining joints, which spins an array of fragrant curries, soups and salads. In this unfussy dining experience, dishes are meant to be eaten together (but not in the small-plates-sharing-style way) and shared amongst the table. “It’s not one dish [that stands out], rather the combination of all the dishes together,” says Lee. The coconut rice brings sweetness to a zingy curry while the ginger salad brings an element of freshness. “I think people appreciate that.” The one downside to their ongoing popularity? Lee can no longer snag a table. “I lost the ability to eat in my own restaurant,” she laughs. Now she has to wolf meals down in the back. “I love the food now as much as I did then. I still consider myself a return customer.” 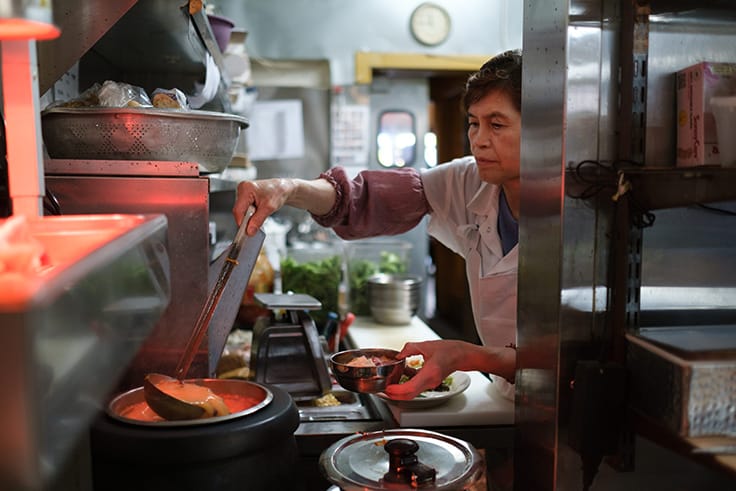 Many of the staff at Burma Superstar are Burmese or Chinese immigrants.

The Bay area may have more Burmese immigrants and restaurants than other parts of America, but the cuisine is still unknown territory for many. As is the actual country of Burma (now Myanmar). “When people have an opportunity to try the food, it opens their mind to Burma,” says Lee, who hopes that the food at Burma Superstar transcends what people may see in the media. “Burma might have been a place they many people have seen in the news, but once you taste the food, you become part of the table. That’s a beautiful thing that food can do.”

Although the menu has evolved over the years, Burma Superstar has always stayed true to its roots. When Lee and Tan first started up, they spent time learning from the previous owners (a Burmese-Chinese couple) as well as the staff (many of whom are Burmese and Chinese). They poured over different recipes and ideas and edited the lengthy menu. Lee talks about how many of the new dishes incorporated into the revised menu were derived from dishes prepared by staff for the staff family meal. “We wanted to offer an experience that was true to us as a team.” They also added new dishes, that, although less widely known, are what Lee believes to be a true reflection of the cuisine. Burma Superstar’s complex, textural dishes like moh hinga, a fragrant catfish chowder with lemon and cilantro, and the tea leaf salad, with fried yellow beans, sesame seeds, dried shrimp and jalapeños, offer an authentic insight into a country thousands of miles away. It also keeps returning customers getting back in line for more. “In a way, you can break bread with people across an ocean,” says Lee. 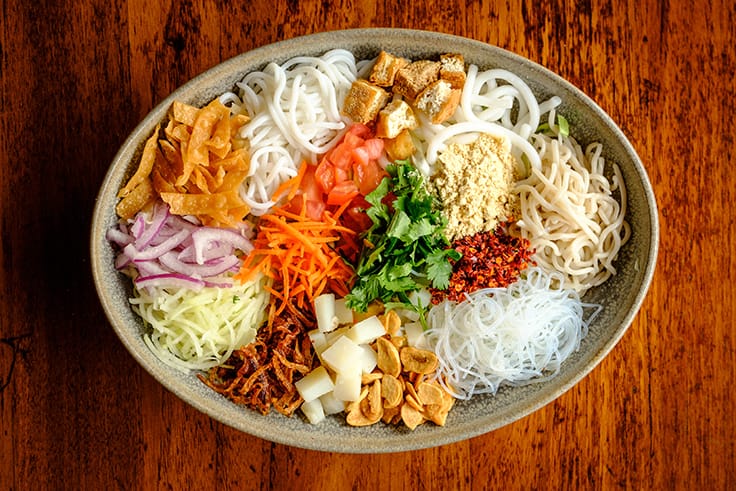 Preparing quintessential Burmese meals is a great idea in theory, but it’s certainly not a simple endeavor. It can be labor intensive and not particularly conducive to the pace of most modern-day restaurants. The style of food is what Lee describes as a labor of love. “My level of appreciation for the cuisine grew when I saw how the food is made,” says Lee, referring to the time and effort involved. At Burma Superstar, no corners are cut. The popular rainbow salad uses a total of 22 ingredients (four different types of noodles) and a number of various techniques. It’s so time consuming they’ve had to hire an employee to solely focus on salad prep. “All the textures and flavors are what make the salad. And there’s something really beautiful about that...I think we do right by that dish,” says Lee, who maintains that sharing these classic flavors with people is what their business is all about.