This is one of many new daytime options on Momofuku Nishi's revamped menu.

Momofuku Nishi first opened in January 2016 to less than stellar reviews. After taking some time to redesign the space and retool the menu, it reemerged in October 2017 like a phoenix from the ashes with a new look and a more focused culinary philosophy. This time around, the cooking is dialed in on Italian fare—though in true Momofuku form, nothing is ever 100% authentic. "I like to think of it as what Italian food could be if it's more open to other influences," says chef de cuisine Nick Tamburo, who previously cooked at Noodle Bar and then Ko.

A prime example of that ethos is the sticky fried pork chop sandwich, available only on weekdays as part of the new lunch menu. Instead of topped with marinara sauce and melted mozzarella, Tamburo's version is brushed with a cherry pepper glaze and topped with shredded iceberg (his favorite sandwich lettuce thanks to the crunch). But before any of that can occur, the pork first spends 24 hours in a buttermilk-kimchi marinade to infuse the meat with flavor. This marinade started as an experiment during family meal, but has now made its way to the mouths of diners. 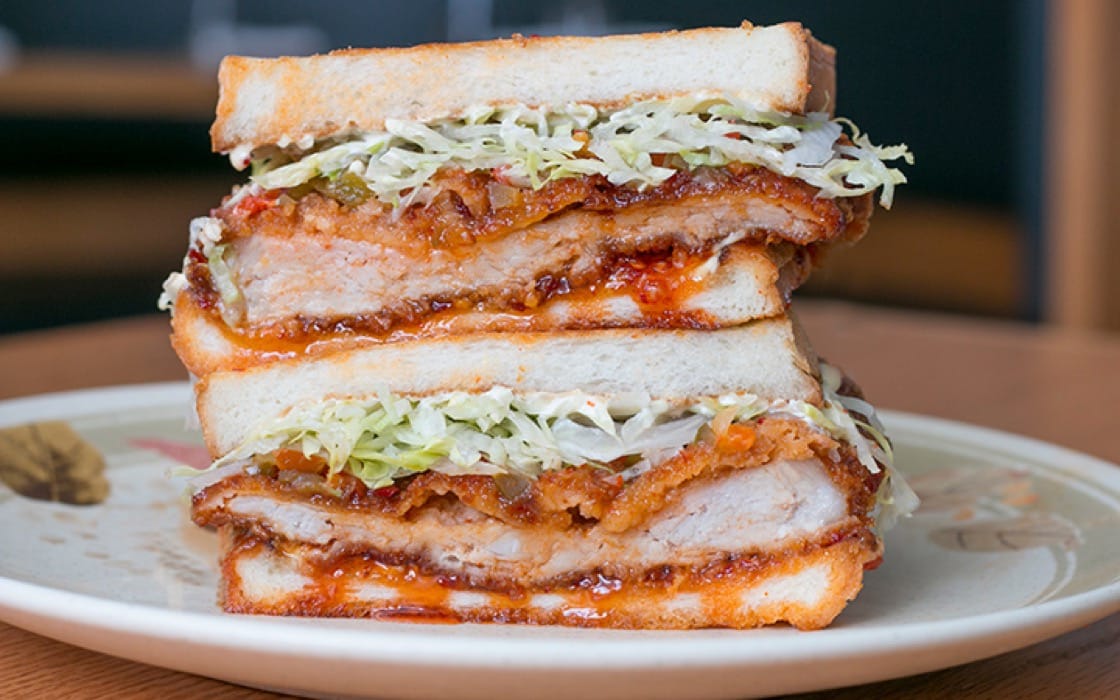 1. In a large bowl, marinate the pork chop for 24 hours. Bread the pork chop in panko. [At the restaurant, the breaded pork chops are usually frozen at this stage and fried straight from the freezer. Tamburo says it helps the breading to adhere to the meat better.]

2. Heat the oil to 350˚F and fry the pork chop until golden brown and fully cooked, 3 to 5 minutes. Transfer the pork chop to a wire rack to drain of excess oil. Sprinkle both sides with the dried oregano, sansho pepper, and some salt.

4. Toast the bread and spread some garlic mayonnaise on each slice. Add the pork chop and top with some lettuce.

Combine all of the ingredients in a food processor and blend until smooth. Reserve.

Add all of the ingredients to a saucepan and simmer until reduced by half. Reserve.

Add the egg yolks, both types of garlic and some of the lemon juice to the food processor. Blend, streaming in the grapeseed oil, until emulsified. Season with salt and the remaining lemon juice as needed. Reserve in the refrigerator for later use.

Learn more about Momofuku Nishi and see how the sandwich is made below.