Chef Raphael Francois shares the recipe and some secrets to success.

Crème brûlée is one of the most quintessential French classics. Chef Raphael Francois, executive chef and partner of Le DeSales, remembers learning how to make the foundational dish while working under his first mentor, chef Claude Lavalle at Le Giverny in Tournai, Belgium. "I think It's one of the first dishes that we teach you to make at school and in a restaurant," Francois says.

Francois went on to work in many Michelin-starred kitchens across Europe, including Le Table d'Adrien and Château de Curzay in the French countryside, and the Hélène Darroze in Paris and in London.

Now, Francois oversees the kitchen at Le DeSales, including the pastry program, which focuses on tried and true recipes. "I'm very classic in terms of pastry flavor," he says. You can't get more classic than crème brûlée.

The crème brûlée recipe that Francois uses is the one from the famed Le Cirque in New York City, where he served as executive chef for two years. "The crème brûlée is one of the classics of that restaurant," he says. "I was making it there, and to me [it] was working very well and I keep doing the same recipe."

For those interested in recreating the French staple at home, Francois shares the recipe and some secrets to success.

Whipping the Egg Yolks and Sugar

As you combine the yolks with the sugar, you're looking to achieve a pale yellow color and a ribbon-like texture. "When you start to whisk them together, it's kind of deep orange. If you keep whisking them it becomes pale and [that's when] it's ready," Francois explains. "The term in French for that mix is making a ruban."

While the cream is warming, you'll add vanilla and salt to impart flavor. This recipe calls for whole vanilla beans, which yield the best result. "It's always better with a real vanilla bean, for sure," he says. At home, Francois says you can also substitute vanilla extract if you're not able to find whole beans.

If you're using a real vanilla bean, split open the bean, scrape the seeds into the pot with the cream, and add the bean itself. After the cream comes to a simmer, remove the shell of the bean, but leave the seeds.

Combining the Cream and Eggs

Next, you'll incorporate the whipped eggs into the hot cream. "When you pour it, you have to whisk it to make sure that the egg yolk doesn't overcook," Francois says. "The way you whisk it, it has to create a kind of foam on top, and that means that the preparation is very well mixed together."

Francois says the key to making a true crème brûlée is making sure that it's just the right thickness. He recommends using a specialty individual crème brûlée dish that is wide and shallow, which helps ensure an even bake. If you use a ramekin or a deeper dish, "the top will be overcooked and the bottom's not going to be cooked," he says. The ideal thickness of the dessert is about one to two inches.

If you'd like to serve your crème brûlée family-style, Francois says you can also use a Pyrex casserole dish and just pour enough of the mixture to reach one to two inches up the side. 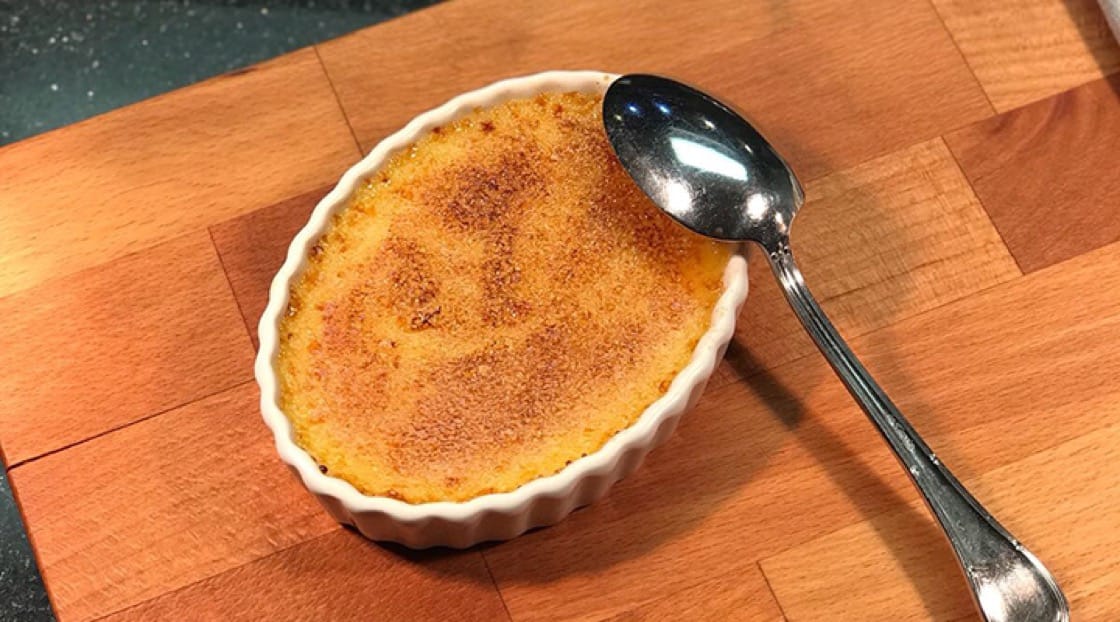 When the dishes go in the oven, Francois says it's best to bake at 205 degrees Fahrenheit to avoid overcooking. "If you put the oven at a higher temperature, it works, but then you have to be more vigilant, and you have to be there to check," he says. "When you put it at lower temperature, it doesn't overcook and [become] grainy, like scrambled eggs."

He adds that the cook time can vary based on what kind of oven you have. That's why it's important to monitor the dishes. Once they have been in the oven for 40 to 45 minutes, check the consistency every five minutes or so. "You shake them slightly," Francois says. "When you see that it moves a bit, but it stays together, it means it's ready." He likens the jiggle to a jelly.

Because of how thin you've poured your crème brûlée, Francois says there's no need to bake them in a water bath as is typically recommended.

Once your crème brûlée is at room temperature, it's time for the fun part. At Le DeSales, Francois uses muscovado sugar to finish the dish. "I like muscovado because it brings some very nutty caramelized flavor," he says. "You can also use white sugar, but personally, I don't use white sugar in my kitchen."

While many recipes often say that a kitchen torch is the superior method of burning the sugar, Francois believes it's ultimately up to your personal preference. "In the past, when our grandparents were making them they didn't have torch."

The original method was a cast iron disc that would be heated to an extremely high temperature and placed on the top of the crème brûlée to sear the sugar. "That's the old school way," he says. "I wanted to do that at Le Cirque on the table, but with the risk assessment, I couldn't."

If you do have a torch, it's fairly easy to burn the tops and you can guarantee an even color on the crust. One thing that can make this process smoother is to put the crème brûlée in the oven to melt the sugar on top a little before hitting it with the torch. "If you have a big piece of sugar and you torch it right away, the sugar will be burned before it will have time to melt," Francois explains.

If you don't have a torch, your broiler can do the trick. Keeping the door open lets you keep a careful eye on the progress and prevents caramelization from happening too quickly and scorching the sugar. Francois recommends putting all of your crème brûlée dishes on a baking tray so you can take them out of the oven quickly and easily, rather than having to fumble with each individual dish.

The recipe Francois provided makes 18 servings in standard crème brûlée dishes, but it can be easily adapted by reducing the number of egg yolks and scaling the other ingredients accordingly. However, he's an advocate for making the full batch so you can savor your hard work. "You dirty many dishes to make it, so do you want just one serving or do you want to have some around for the next day?"

Francois says the perfect crème brûlée will be silky and creamy. "Something that holds on the spoon; something that is very silky on the palette," he says. "If it's overcooked, you're going to get something grainy. That's not what you want." 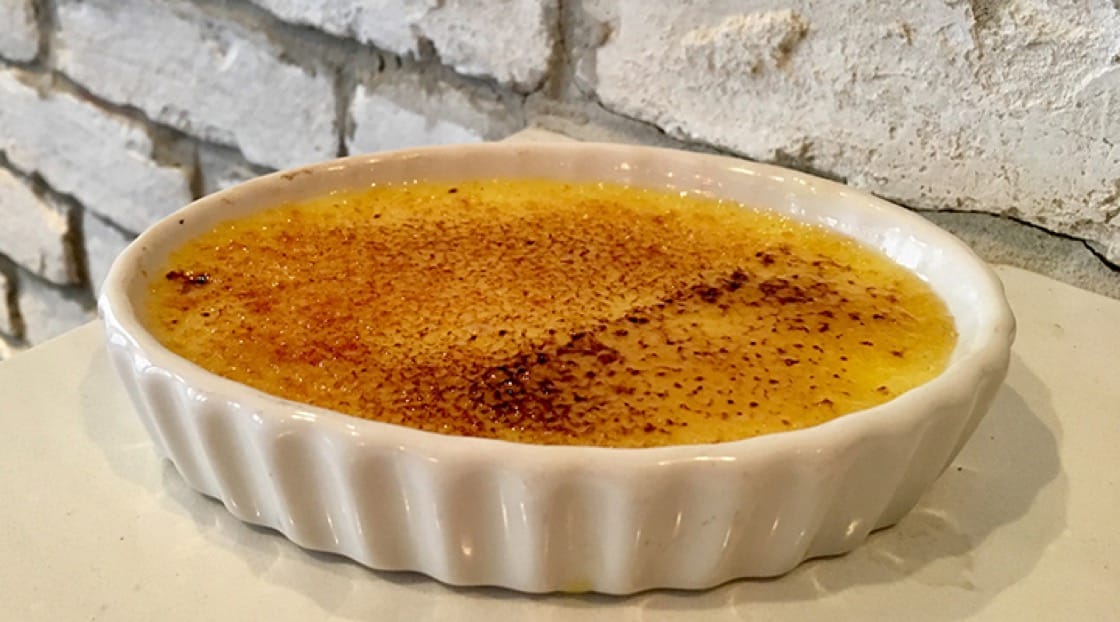 Method
1. Whisk the egg yolks and sugar together in a bowl until pale yellow in color and a ribbon-like texture is achieved. Meanwhile, heat the heavy cream, vanilla seeds and pod, and salt in a sauce pot on the stove and bring to a simmer; remove from heat and discard the vanilla bean pod.

2. Temper the egg mixture by whisking 1 cup of the heavy cream into it; add the egg yolk mixture to the rest of the cream mixture.

3. Divide the custard mixture among the baking dishes, about 120 grams into each. Bake the crème brûlée in a 204˚F convection oven for 66 minutes with the fan at 60%.

4. Sprinkle each with some muscovado sugar and torch until nicely caramelized.