Where to get the best bowls of cold noodles in Seoul.

The summer heat and humidity may have dissipated somewhat, but the queues outside the city’s popular naengmyeon establishments show no sign of subsiding. Although naengmyeon is a beloved summertime staple, it is enjoyed throughout the year, even during the frigid winter months.

Naengmyeon means ‘cold noodles’ and variations of the dish exist all across Korea. In Pyeongyang (North Korea), naengmyeon was originally a humble dish of buckwheat noodles served in chilled dongchimi (winter radish kimchi) soup. The noodles are topped with pickled and fermented vegetables and sometimes with a few slices of cold boiled meat – traditionally pheasant, but more commonly beef or pork these days. The popularity of the dish south of the 38th parallel is a relatively recent phenomenon. North Korean refugees, displaced by the civil war and nostalgic for food from back home, opened up small eateries, offering fellow refugees comfort in the form of nourishment.

Pyeongyang-style naengmyeon has since evolved, with different regions around Korea adapting the dish to suit local palates. In Busan, for instance, the dish has evolved into milmyeon, featuring noodles made with a mixture of wheat, potato and sweet potato starch, and a sweet and tangy broth that can only be described as a distant cousin of the original version.

Hamheung naengmyeon is another popular style of naengmyeon whose origin is often disputed. The consensus, however, is that it was born south of the border following the war. Historians claim that North Korean refugees from Hamheung developed their own style of naengmyeon with noodles made with the starch of potatoes and sweet potatoes which were staple crops back home. The noodles, which have a distinct elasticity, are served with a fiery-red sauce made with chili powder, chili paste, sugar, garlic, ginger, sesame oil and vinegar.

Craving a bowl of chilled noodles? The following are eight naengmyeon restaurants in Seoul recommended by the Michelin Guide. 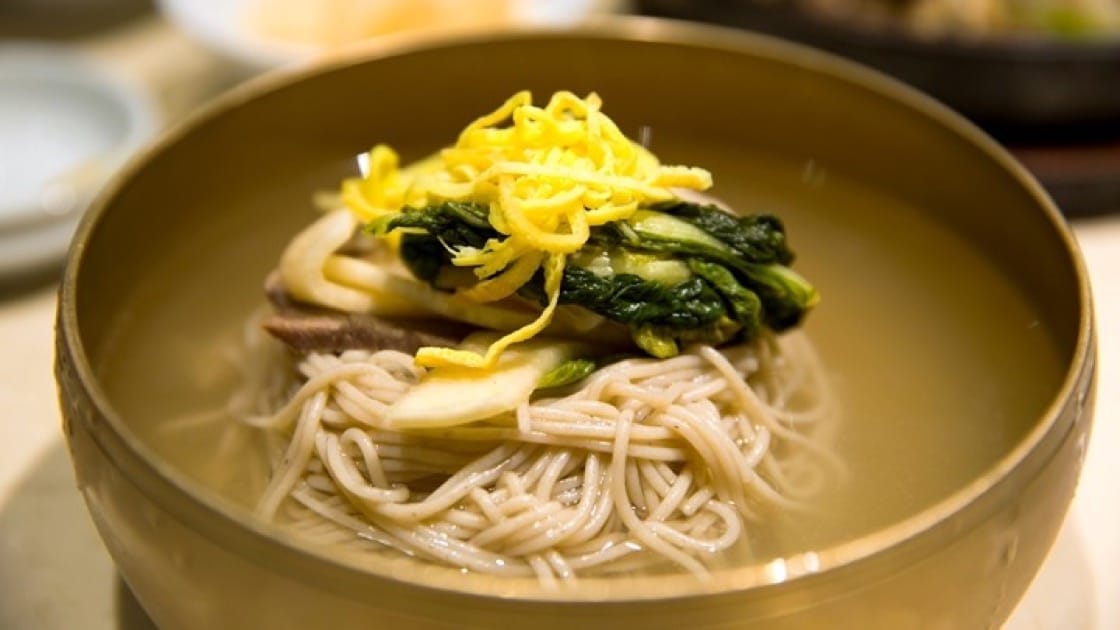 Bongpiyang
Famed for its authentic Pyeongyang-style naengmyeon and barbecued pork ribs, Bongpiyang is operated by the local Byeokje Galbi barbecue restaurant franchise. The famed noodles, with a high buckwheat content, are served in a flavorful chilled beef broth, topped with slices of beef and fermented cabbage greens. Although naengmyeon is typically regarded as a seasonal dish, enjoyed in the warmer months, this restaurant is busy all year round.

Jungin Myeonok
Originally located in Gwangmyeong City, the famed restaurant, celebrated among locals for its tasty and authentic Pyeongyang-style naengmyeon, moved to Yeoeuido in 2014. The Gwangmyeong location of Jungin Myeonok continues to be in business, but is run independently from the Yeoeuido restaurant. The current owner says the recipe of the much-loved Pyeongyang-style naengmyeon is authentic and was developed by his parents who hail from North Korea. 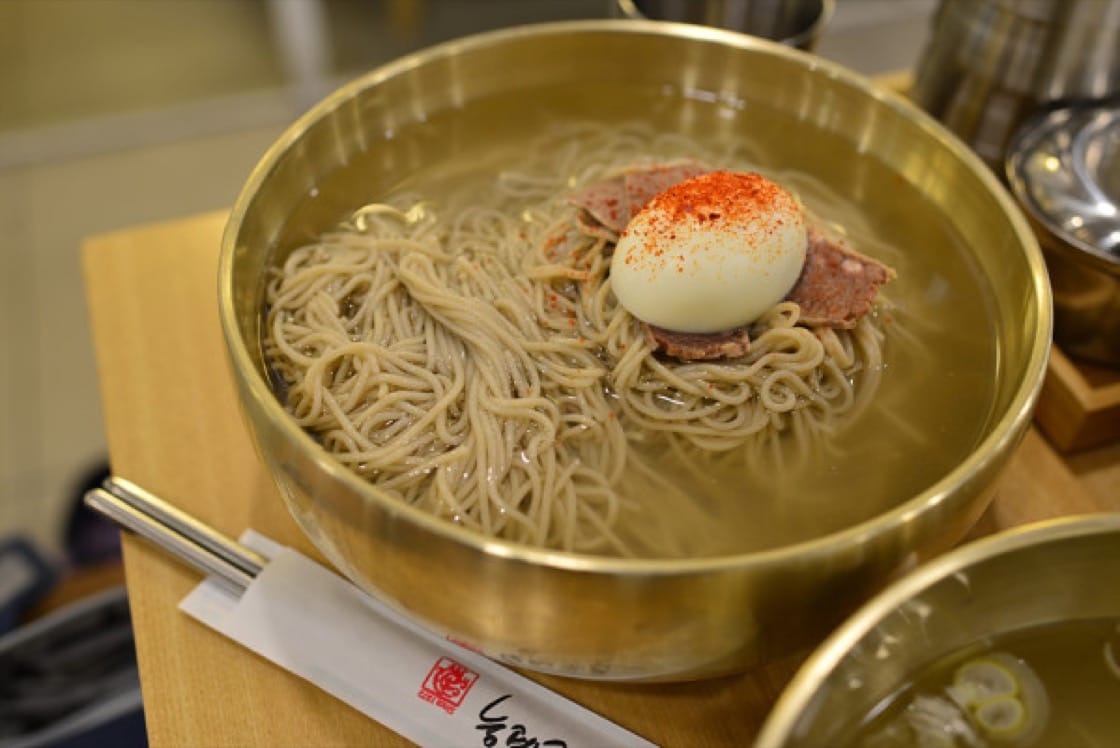 A bowl of naengmyeon at Jungin Myeonok

Nampo Myeonok
Tucked away in a small alley among densely populated office buildings, this longstanding institution has been a favorite among patrons of all ages for its authentic Pyeongyang-style chilled buckwheat noodles and boiled meat platter with vegetables in a hot clear beef broth. The atmosphere is lively and the décor traditional and warm. The service is simple, but the staff is always friendly. Chair seating and floor seating are both available.

Neung Ra Do
Following the success of its first location in Pangyo, the Seoul location opened its doors in November, 2015. The restaurant specializes in Pyeongyang-style cuisine, including chilled buckwheat noodles and dumplings. The restaurant’s dedication to quality is demonstrated in its choice of ingredients, using only locally-produced beef and Mongolian buckwheat. Select dishes are offered in smaller sizes. The dining space is modern, simple and spacious. 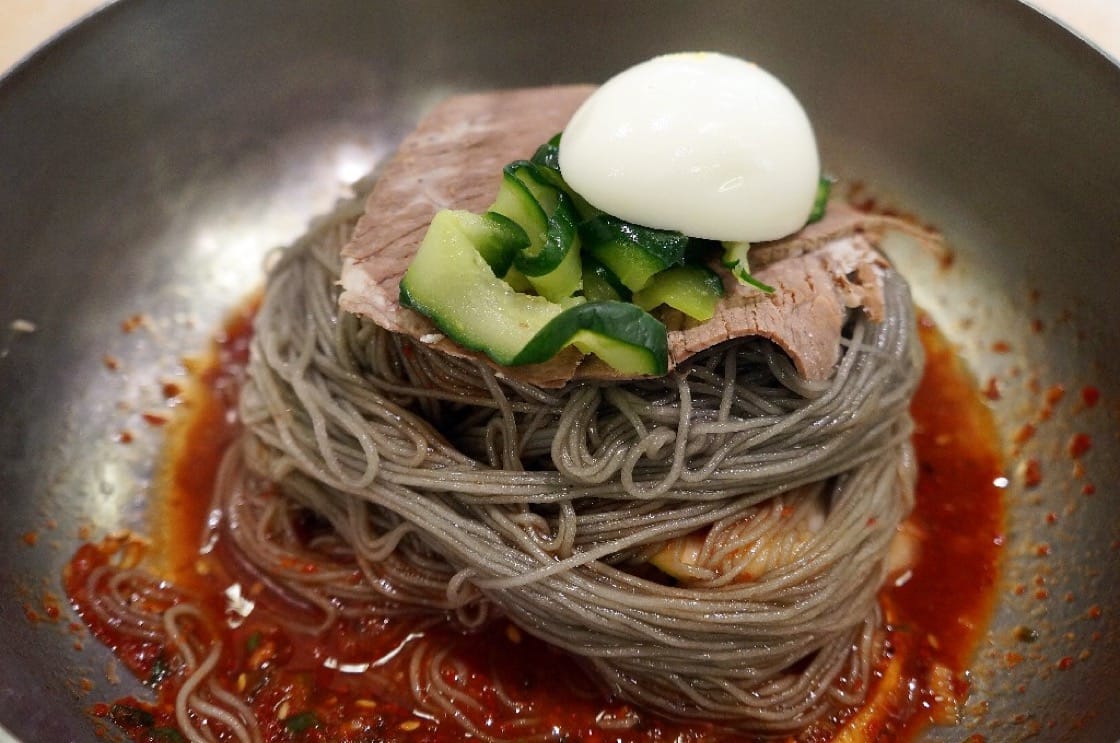 Ojangdong Hamheung Naengmyeon
This family-owned establishment has been in business since 1953 serving their specialty, Hamheung-style naengmyeon. Hamheung-style naengmyeon is typically made from potato starch, which gives the extra thin noodles their distinct chewy texture, unlike the thicker and less springy Pyeongyang-style buckwheat noodles. The signature dish to try here is bibim naengmyeon, served with a sweet and spicy sauce, cold beef slices and a halved boiled egg.

Pildong Myeonok
Located near Namsangol Hanok Village by Chungmuro subway station, this restaurant is a Pildong landmark that has been serving Pyeongyang-style naengmyeon for decades. The restaurant’s chilled broth has a delicate beef flavor, its subtlety both loved and disputed among naengmyeon aficionados. Another highlight of the restaurant is the buttery and tender boiled pork belly, served in thick slices with a dipping sauce. Homemade dumplings are also popular. 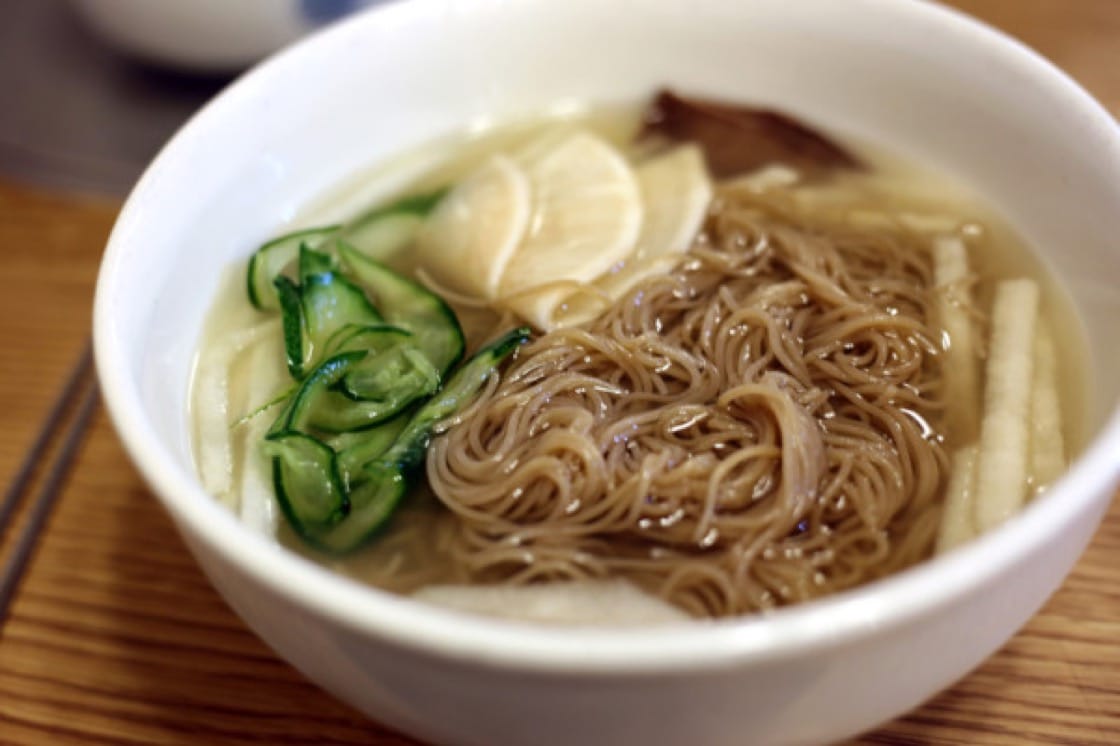 Nampo Myeonok
Pyeongyang Myeonok
This establishment has been open for three generations, serving some of the finest bowls of Pyeongyang-style naengmyeon in the city. The long queue outside the entrance constitutes a part of the street’s daily scenery during the sweltering summer months. The clear meat broth is delicately flavored and the buckwheat noodles have a pleasant texture, firm and not too chewy. Steamed dumplings and boiled pork belly–served warm–are also standout dishes.

Woo Lae Oak
Lauded as one of the best Pyeongyang-style naengmyeon restaurants in the city, Woo Lae Oak has been serving consistently stellar food since 1946. The family-operated establishment can be found in the back alley of Euljiro 4-ga, a bustling business hub its heyday. The restaurant interior is spacious and spotlessly clean. Indulge in their legendary cold buckwheat noodles, served in broth or without in a spicy sauce, and their bulgogi, grilled table-side.