Chef Massimo Bottura of three-MICHELIN-starred Osteria Francescana is no stranger to using top-notch ingredients to create culinary masterpieces. But, the 55-year-old maestro of North Italian cuisine believes in going beyond cooking and running a thriving restaurant business — he wants to make impactful changes to society through food.

The Emilia Romagna-born chef had an epiphany at the World Expo in Milan in 2015. Even though the event’s theme was on “Feeding the Planet, Energy for Life”, most of the 150 participating countries showcased the provenance of their best produce, which puzzled Bottura. He decided then to tackle pressing global issues such as food wastage and poverty head-on.

He opened a pop-up soup kitchen Refettorio Ambrosiano in an impoverished district of Greco in Milan and invited Alain Ducasse, Rene Redzepi of NOMA and Daniel Humm of Eleven Madison Park to cook. Instead of artisanal ingredients, they used 13,000kg of scraps from markets and the expo’s pavilions to whip up 10,000 free, nutritious meals for the poor. 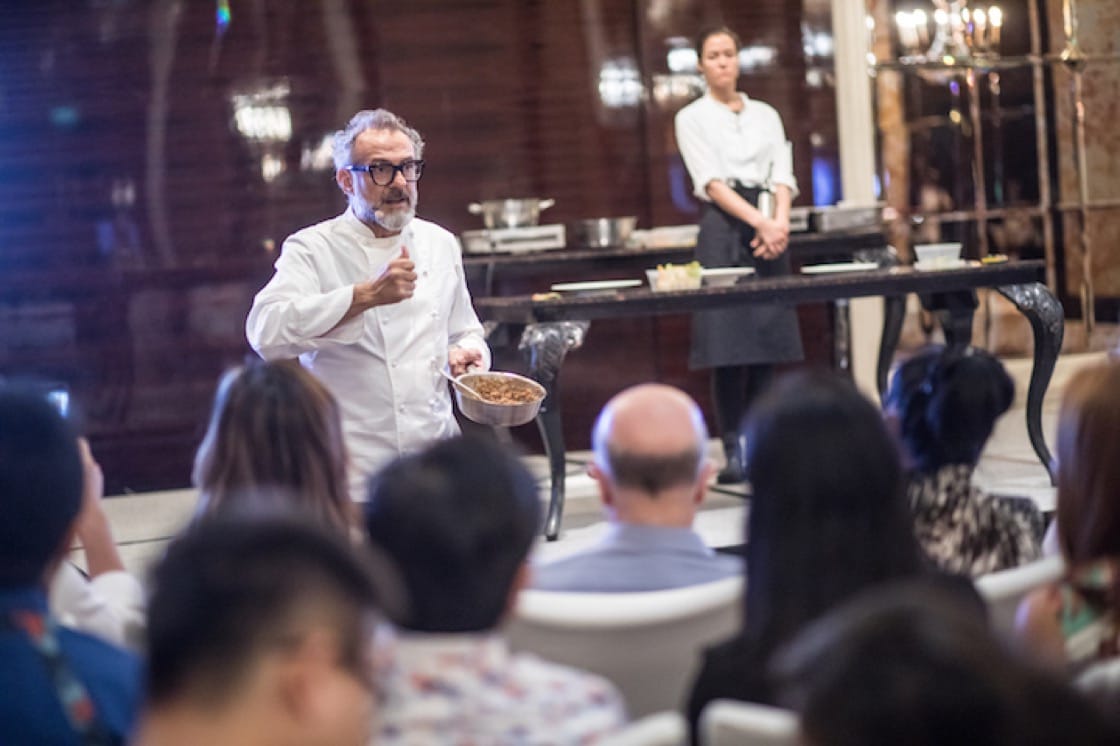 Massimo Bottura shared the inspiration behind his three dishes at a cooking demonstration in Singapore. (Credit: American Express)
In Singapore for an American Express event in August 2018, he says: “Everyone was showing how beautiful their country and produce were, but we need to do much more when 1 million people in this world go hungry, while 33% of the world’s food supply are wasted.”

He adds with a chuckle: “No one living on the streets knew who Ducasse was, but it was the joy that we get from cooking for this project. The chefs received much more than they gave.”

Three years on, Bottura is running an international chain of permanent community kitchens under his non-profit organisation, Food For Soul. Currently, Refettorio has outposts in Milan, Rio de Janeiro, London and Paris. Next month, it will also open in Naples and an outlet in Merida, Mexico, is also in the works.
Advertisement
Advertisement

“I look to artists for inspiration and understand them, then I steal their ideas and transform them into edible bites and transmit emotions through them.” 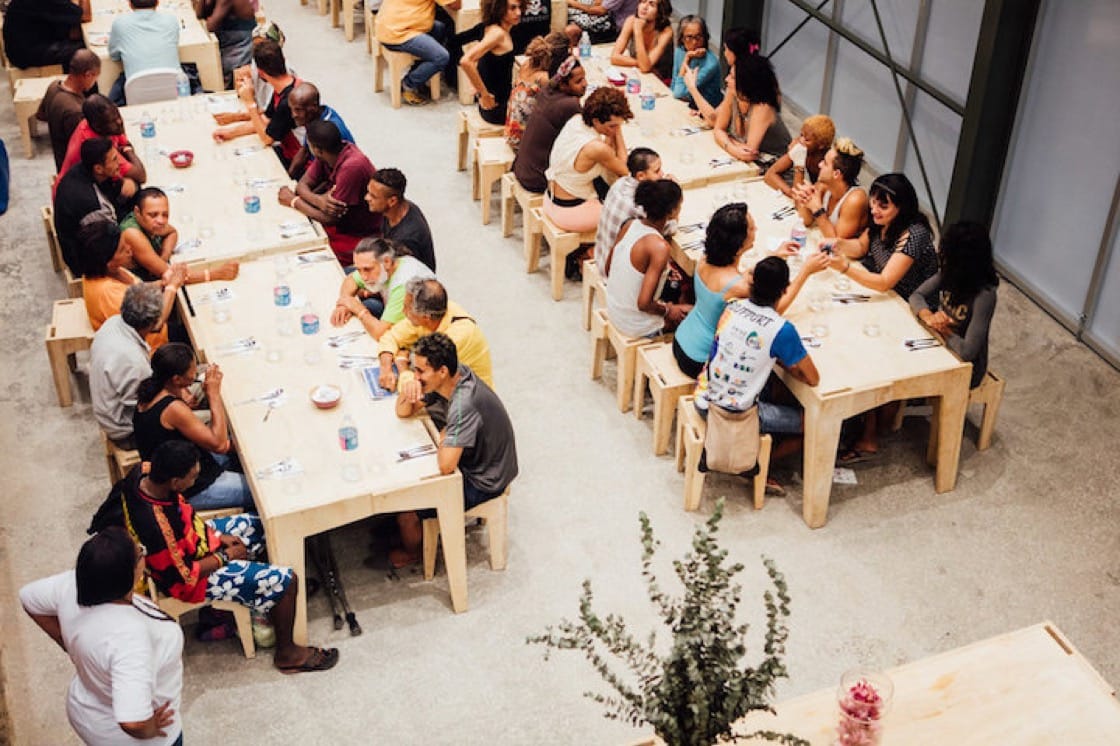 Refettorio Gastromotiva in Rio was set up in conjunction with the Olympics two years ago. (Credit: Refettorio Gastromotiva)
The indefatigable chef has also chalked up an impressive line-up of partners, including charity foundations, artists and architects. One of the more prominent outlets is the Refettorio Gastromotiva, which opened during the Olympic Games in Rio de Janeiro in 2016. Volunteers in the socially inclusive dining hall cooked and served meals using leftover ingredients from the athletes’ village.

Interestingly, the opportunity was spawned from an innocuous WhatsApp message that the Eduardo Paes, mayor of Rio de Janeiro, sent to Bottura at 5am. Recalling the incident, Bottura says with an incredulous smile: “He texted, ‘I am the Mayor of Rio de Janeiro. I am your biggest fan. I am watching Chef’s Table on Netflix. Can you do a Refettorio in Rio?”

Besides having the intuition on “which partners have the right energy and are serious”, keeping an open mind is also crucial. He says: “Keep the door open in life or else you are not going to do something special. If you are clear-minded and quick with your ideas, you are going to make it.” 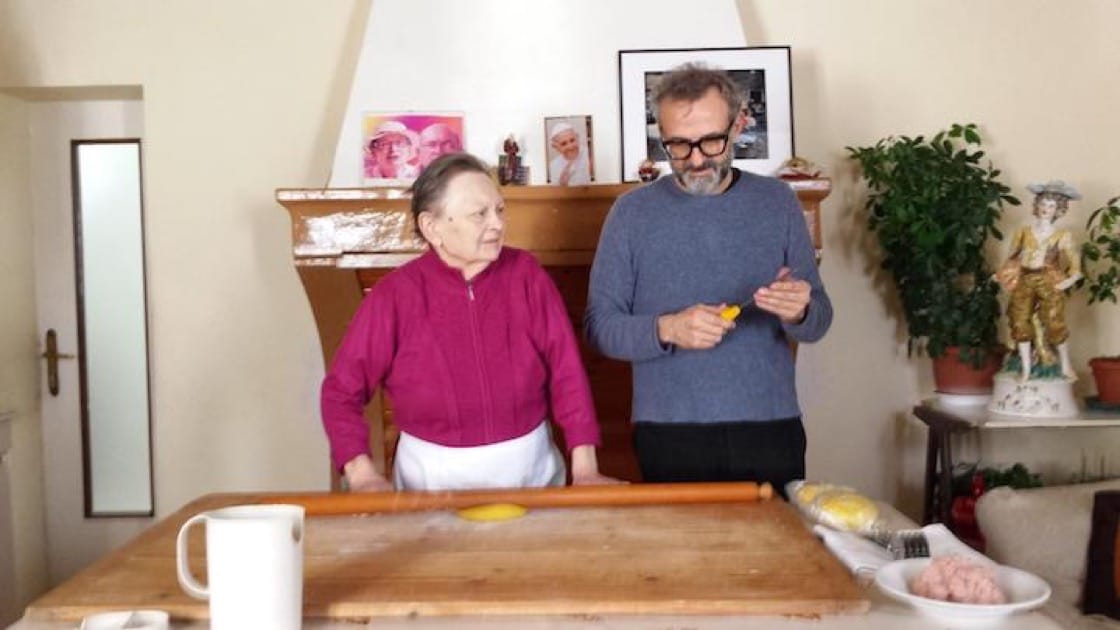 Cooking for well-heeled diners at Osteria Francescana who splash out S$390 for a 10-course tasting menu might seem worlds apart for cooking free meals for the vulnerable, but Bottura sees the two as the same.

He muses: “Cooking is hard work; you get better through practice. But, it is also an act of love, like how my grandmother taught me. When you cook for the underprivileged, you put in more love.”

Adopting a family-like mantra among his brigade of 60 staff at his restaurant in Modena is also a key pillar to the success of the world-renowned restaurant. Bottura says that family “is a very strange word”, given that his family members were scattered around the world. While he was in Singapore for a cooking demonstration and dinner for American Express Platinum cardholders  (with wheels of two-year-old aged Parmigiano-Reggiano shipped in), his United states-born wife, Lara was in New York, his undergraduate daughter, Alexa, was in Italy, while his son, Charlie, was in Greece.

That’s why he treats his restaurant team as part of his family. Sharing a sagely lesson that he picked up one of his long-time chefs, Lidia, whom he has worked with for more than three decades, he says: “If you want to be successful, you have to treat everyone like family. You have to eat together with them 30 minutes before lunch and dinner service, and talk to them as if you are with your family around the kitchen table at home.” 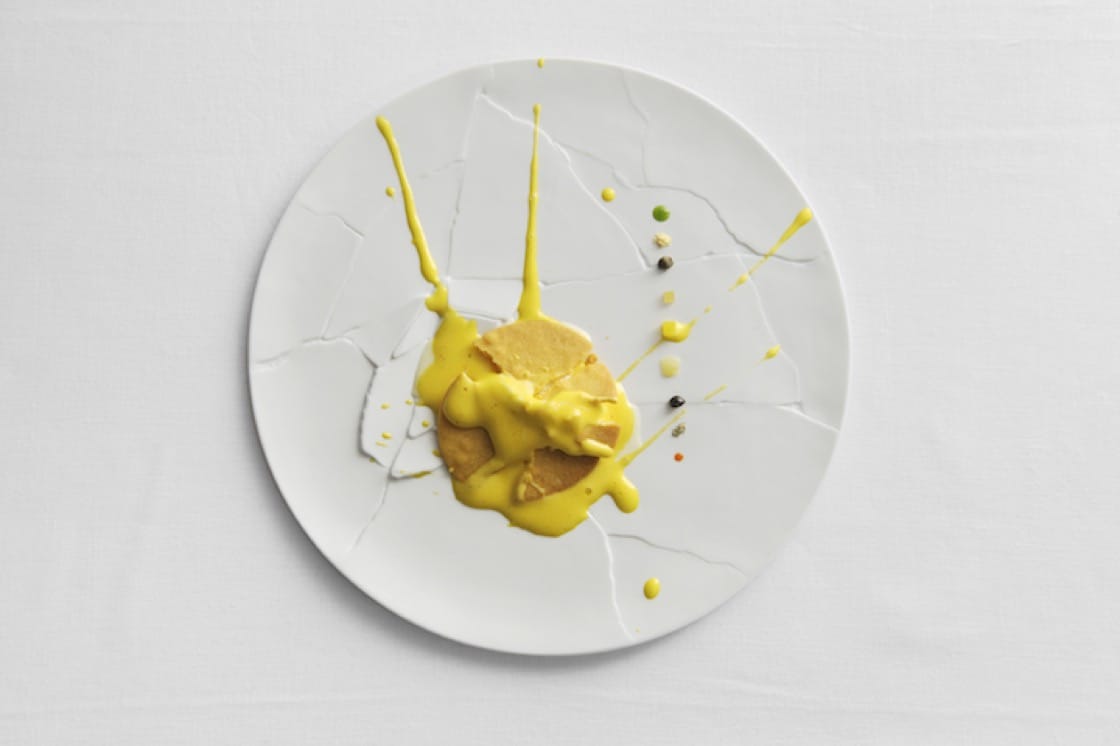 One of Massimo Bottura's most recognised dishes, Oops! I Dropped The Lemon Tart! was born when his sous chef Kondo Takahiko accidentally dropped a lemon tart. (Credit: Paolo Terzi)
Food Sparked By Art

While his mantra to operating restaurants is down-to-earth, his creations on the plate are anything but simple. The maverick chef’s culinary creations, such as The Crunchy Part Of Lasagne that features a torched tri-coloured pasta sheet reminiscent of the Italian flag, and Oops I Dropped The Lemon Tart!, are inspired by artistic concepts.

Engrossed in sharing the inspirations behind his dishes — which include an eclectic range of artists such as Chinese contemporary artist, Ai Weiwei and German sculptor Joseph Beuys — he peppers his rapid-fire speech with quirky anecdotes, such as his pet peeve with spaghetti bolognese to how someone waited for four years to pass a piece of sunflower seed art to him.

He says: “I look to these brilliant minds for inspiration and understand them, then I steal their ideas and transform them into edible bites and transmit emotions through them.” 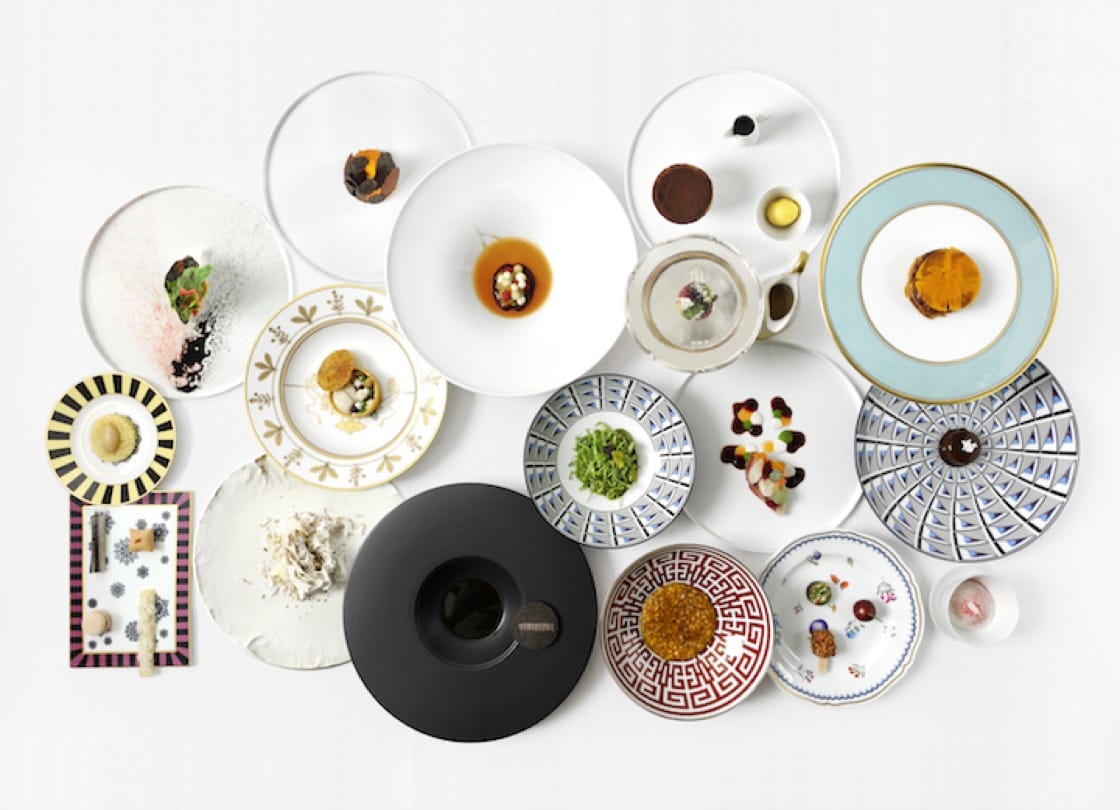 Many dishes at Osteria Francescana are inspired by Bottura's interest in music and art. (Credit: Paolo Terzi)
Over the past 14 years, Osteria Francescana has received prominent guests, from film director Alfonso Cuaron to French photographer JR. “People come here not to just eat food, but they also want to eat a piece of our creative mind and vision.”

He admits that his experiments with traditional dishes in a trattoria with influences from jazz, art and music can be complex. He quips: “Twenty-five years ago, people wanted to crucify me in the piazza as I was playing with grandmother’s recipes. In Italy, we cannot mess with three things: grandmother’s recipes, the pope and the soccer team.”

However, he stops short of calling himself an artist who is “free to do whatever he wants”, and prefers to be known as “an artisan who creates good food”. His art-to-food thinking approach is straightforward: “Get deep into your interest, let it become your passion, so that you can transfer emotions through them.”
Advertisement
Advertisement