A fortuitous opportunity to learn a curry puff recipe from a Hainanese sailor changed the life of Tham Niap Tong, the founder of Rolina Traditional Hainanese Curry Puff in Tanjong Pagar Food Centre, which was recognised with a Bib Gourmand award last year.

Barely out of his teens in the 1950s, Tham lived from hand to mouth as he struggled to find odd jobs. He was almost at his wits’ end when he met his benefactor, a Hainanese sailor who taught him a curry puff recipe that he had learnt from working in a Peranakan household. 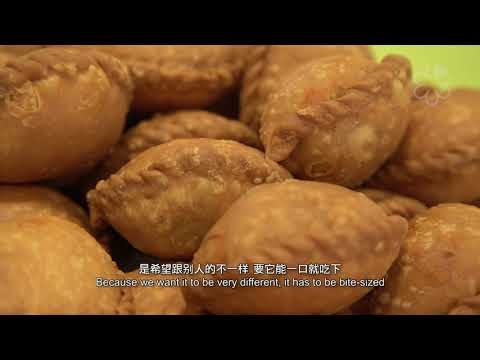 The MICHELIN Guide Bib Gourmand Series: Rolina Traditional Hainanese Curry Puff
Now a sprightly 79 year old, Tham recalls in Mandarin: “I couldn’t afford to have three meals a day, but the sailor told me that I would not go hungry if I learnt a skill. Since I was unemployed, I thought to try making curry puffs.”

However, the sailor would only divulge his entire recipe, from the frying of the curry paste to making the dough, to Tham on one condition. “He told me that I was not allowed to tweak his recipe and I had to preserve its traditional taste.”
Advertisement
Advertisement 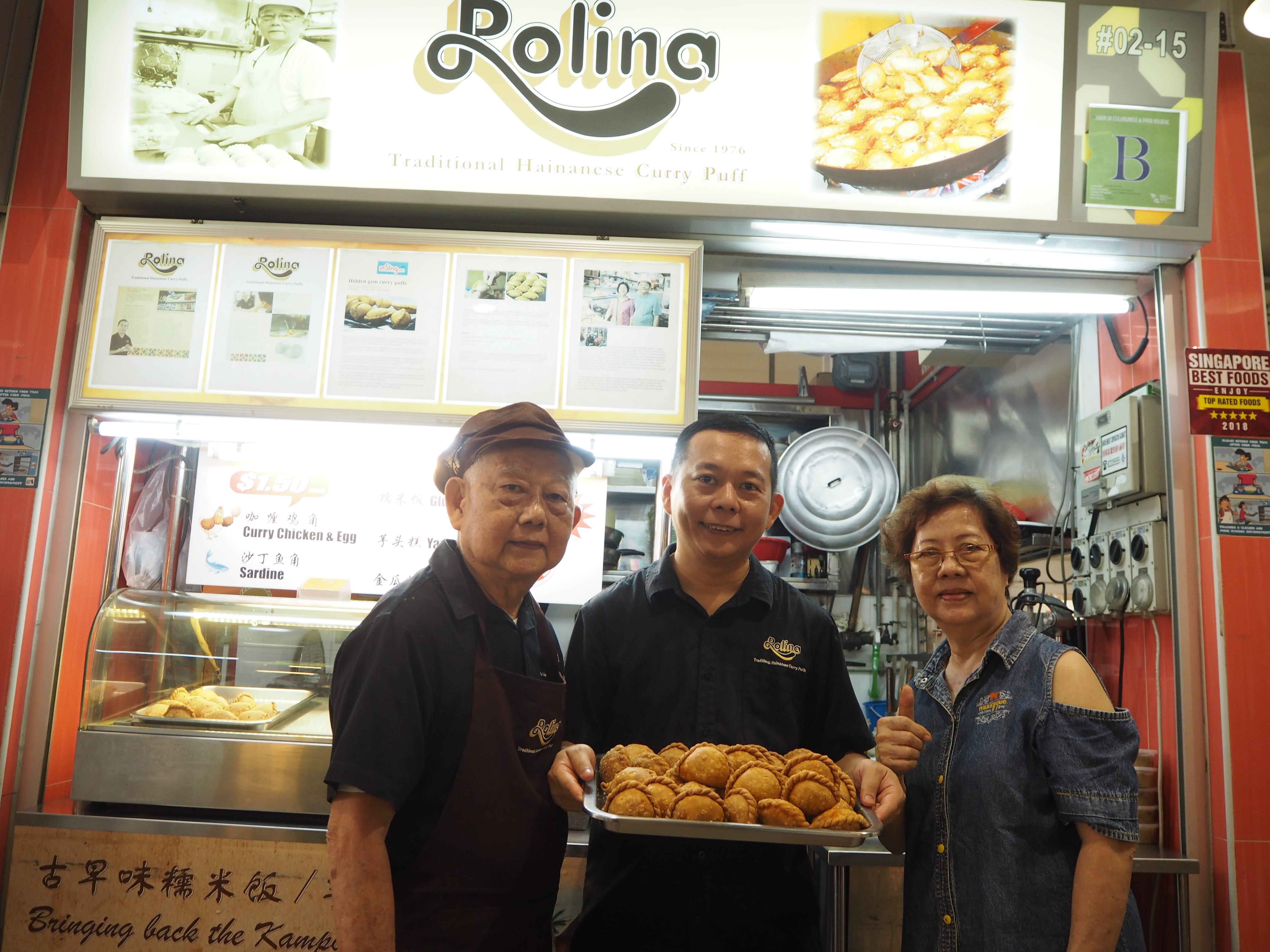 The Tham family has been running Rolina Traditional Hainanese Curry Puff for more than 50 years. (Credit: Kenneth Goh)
From Novena To Rolina

The Hainanese curry puff recipe turned out to be Tham’s meal ticket for the next five decades. For 20 years, his motor cart with a wok attached to it was a familiar sight to worshippers at Novena Church in Thomson Road. The name of his business was accidentally christened by one of his customers who mispronounced “Novena” as “Rolina”.

Recounting his days as an unlicensed street food peddler, he says with a chuckle: “Those days were tough, especially when it rained or when health inspectors conducted spot checks. I had to scramble quickly to avoid them. If you didn’t move fast enough, you would get fined.”

We ask to see photos of this iconic pushcart, but Tham says frankly: “We have no old photos as we were struggling to survive. We were just trying to make ends meet.” 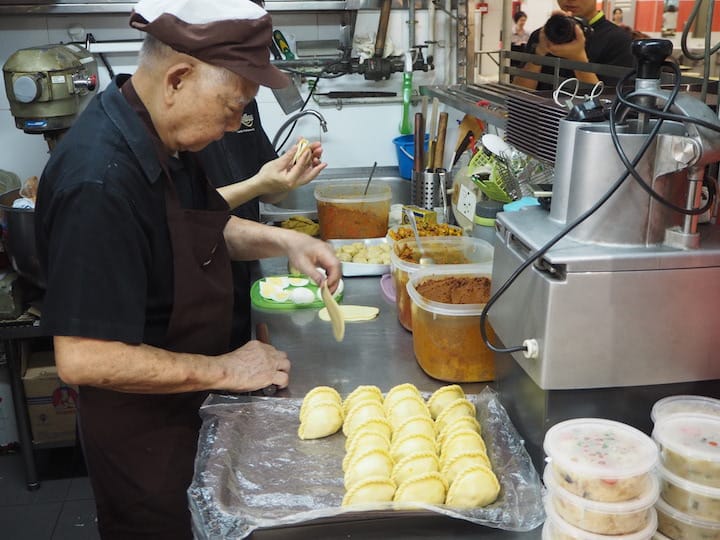 Tham Niap Tong, who is in his 70s, ran his Tanjong Pagar stall by himself until a few years ago. (Credit: Kenneth Goh)
His business grew and shrank over the years (It used to be a bakery chain in Ang Mo Kio in the 1980s and 1990s). Today, there is only one outlet left at Tanjong Pagar Food Centre, where it has been for the past 17 years.

These days, Rolina has grown to become one of the more well-known curry puff brands in the country and is the only curry puff stall recognised in the Bib Gourmand list in the MICHELIN Guide Singapore 2018. The stall sells two flavours of curry puffs — potato and sardines, which are wrapped, hand-crimped and deep-fried at the stall. 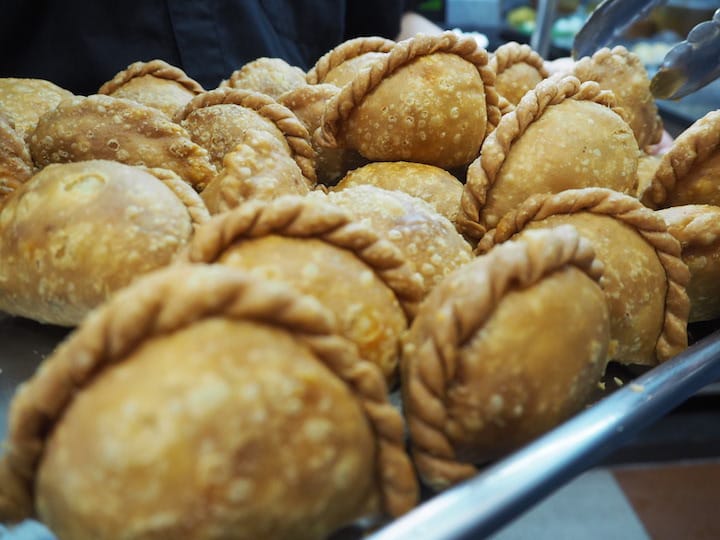 Rolina's curry puffs may be small, but the thin-crusted puffs pack a spicy punch as they are filled with rempah. (Credit: Kenneth Goh)
Smaller Puff, But It Packs A Punch

Rolina’s curry puffs stand out for being slightly smaller than most puffs.

Tham’s 43-year-old son, Bren, who runs the business, says: “We make our curry puff bite-sized and with a thin crust, so that the curry puffs are mostly filled with fillings that are packed with flavours from the first bite.”

What makes Rolina’s curry puffs so special? It is the rempah, or spice mix. The diced cooked potatoes and chicken slices are cooked with the rempah for three hours so that the flavours are completely infused. A crescent of hard-boiled egg is added into the parcel before the dough is wrapped up.

It helps that the younger Tham was eased into the family business from a young age. The youngest of four children recalls with a laugh: “When your parents make curry puffs for a living, it becomes a childhood toy. We had nothing else to play with but making the fillings or filling them into curry puffs. It has been part of our daily lives from young.”

After completing National Service, he began helping out at the business full-time. He started out with tasks such as peeling potatoes, before moving on to preparing the spices, making the dough and filling, and eventually frying. 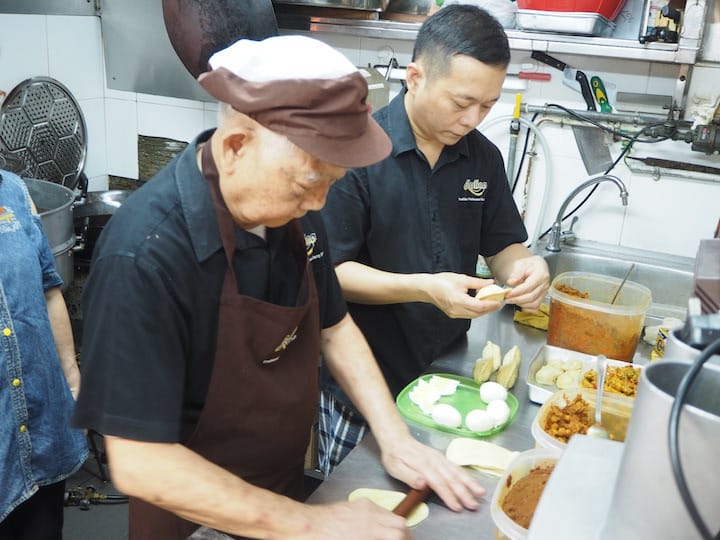 Tham Niap Tong and his son, Bren make and deep-fry the curry puffs in their stall. (Credit: Kenneth Goh)

The younger Tham says that his father assigned him smaller tasks in the curry puff-making process gradually, while doing spot checks on the sly. “My father had an eye for precision. He would go for his coffee break but observed me from the corner of his eye to make sure that I was doing the right thing,” he says, mimicking the stern tone that his father had used on him.

Despite his advanced age, Tham ran the Tanjong Pagar stall by himself — from opening the stall at 6am daily to making and frying curry puff — until last January.

Having passed the baton to his son, he says in a determined voice: “I have paved a route for him to pick up a trade and earn his livelihood. It hasn’t been easy being a curry puff hawker and I admire his efforts.”

On continuing the family business, the younger Tham says: “Our curry puffs have a long history and distinctive taste. I hope that the curry puffs can continue to bring back food memories that people have from the old days. I do not want this taste to be lost.”

Taipei Behind The Bib Night markets
Dining Out 1 minute

Singapore Behind The Bib hawker