Behind The Bib: JB Ah Meng

Fancy some late night grub with a chance of a celebrity chef sighting? JB Ah Meng is your best bet.

Going to JB Ah Meng at night doesn't only mean having good food – you might also bump into some of the most famous chefs in the world. This zi char restaurant has hosted names from all around the world such as Spanish chef Ferran Adria, known for his deconstruction cuisine, Dutch chef Joris Bijdendijk; British chef Gordon Ramsay, presenter of many reality programmes like Hell's Kitchen; and Anthony Bourdain chef and familiar TV face known for his caustic remarks.

Experience makes dreams come true
The restaurant's name ‘JB Ah Meng’ is rather enigmatic. Its owner Wang Feng, 53, hails from Ipoh, Malaysia, not Johor Bahru (JB) as you might think. He became an apprentice in Kuala Lumpur at the age of 14, and now has over 30 years of culinary experience under his belt. 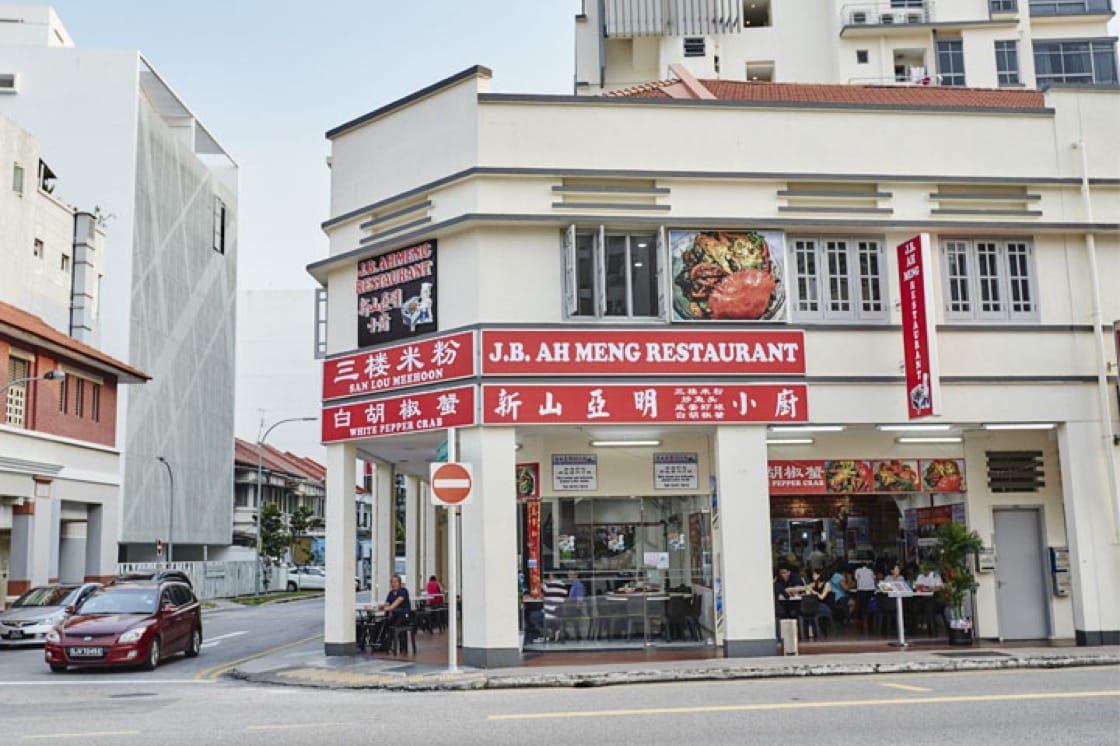 The exteriors of JB Ah Meng. Photography by Wong Weiliang.
He started from the bottom and climbed to the position of head chef one rung at a time and knows the kitchen processes inside out. He dreamt of opening his own place as he worked in various restaurants around Malaysia, Singapore and the Netherlands.

Wang had tried operating a zi char stall in a café, but it wasn't until 2013, when he opened JB Ah Meng in Lorong 23 Geylang, that he came into public attention. His Malaysian zi char was evidently a novelty to the area, proved by the long line of crowded tables in the alleys outside the little restaurant, even in the middle of the night.

“Like many businesses, it took us around 2 years to stabilise”. Johor Bahru is a general term for Malaysian zi char and Ah Meng is my nickname.” Wang explains.

The restaurant moved to a better location at 534 Geylang Road in November 2016, where there is air-conditioned seating. 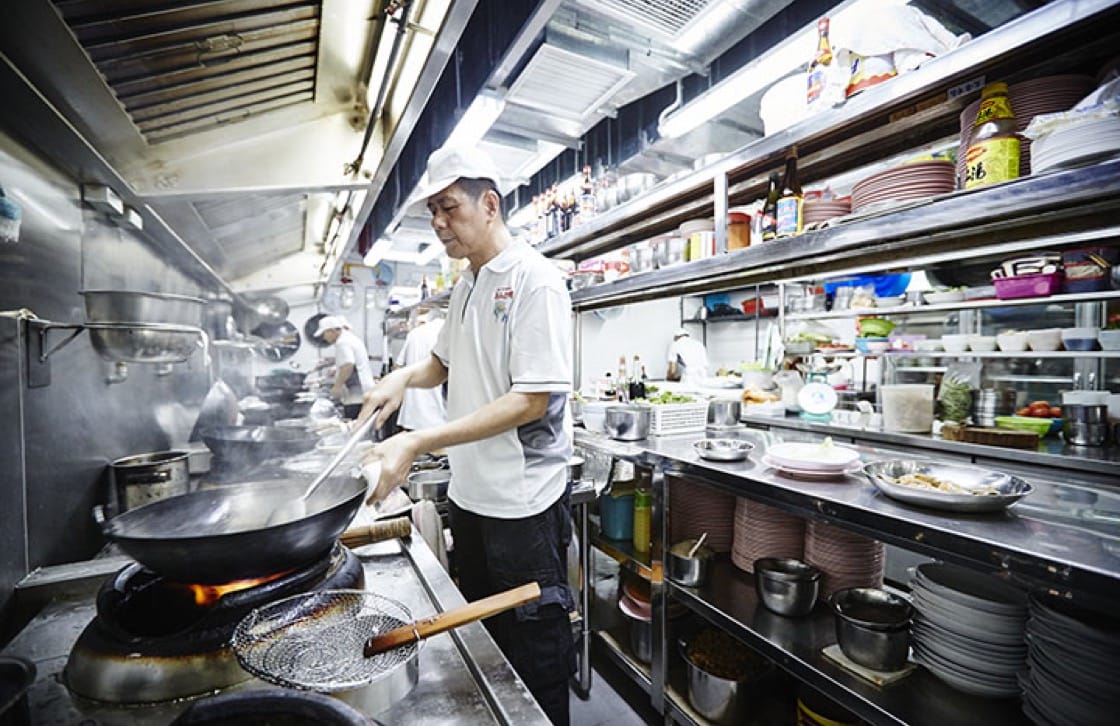 San Lou Bee Hoon is another signature dish. Rice vermicelli mixed with dried shrimps, shredded squid and soy sauce is fried like a pancake until crisp on the sides. The crunchiness leaves a satisfying flavour in the mouth, astounding many customers. ‘San Lou’, Wang explains, is named after a renowned restaurant in Johor Bahru, Malaysia, where they cook bee hoon in the same way. The dish, brought over by Wang, subsequently became an unexpected hit in Singapore.

He is also especially proud of his Garlic Chilli Lala. Lala is a type of plump Filipino clam, which, under Wang’s superb skills, becomes an outstanding dish.

Don’t worry if you’re vegetarian – there are also plenty of extraordinary items in that department. Snap beans with Lotus and Stir-fried Chinese Chives are popular dishes in JB Ah Meng that you won’t see in normal zi char restaurants.

SEE ALSO: What is zi char? 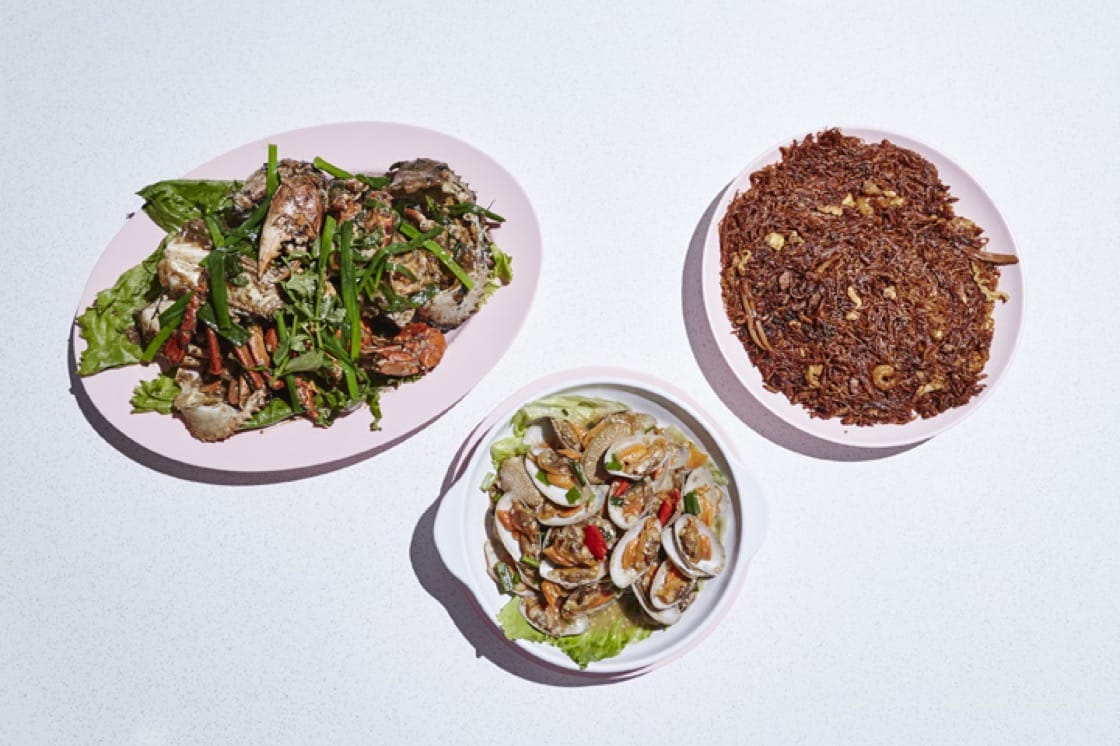 Wang feels proud and honoured that his dish is being considered on the same level as chilli crabs and black pepper crabs, but he ultimately refused Bourdain’s invitation. It is his wish to focus on his little restaurant in Geylang and serve the locals.

"Our menu is slightly different from other zi chars. It only contains 35 options, as we prefer quality to quantity. After 30 years in the field, I concluded that the very essence of my cooking could be condensed into these dishes. That customers choose to eat here is the biggest stamp of approval for us." 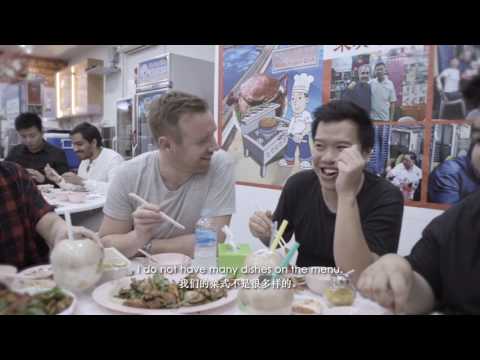