With the Dumpling Festival at its tail end, it doesn't take long before publicity messages promoting the sale of mooncakes start to surface. The local market boasts a wide selection of mooncakes, from the traditional lotus mooncake and ham-stuffed five kernel mooncake, right to the fashionable crispy skin mooncake, and the increasingly popular snow skin and chocolate mooncakes. There're choices catering to every taste. But if one were to select a particular mooncake which embodies all of what Hong Kong stands for, it has to be the locally-created custard mooncake. Its birthplace is the Spring Moon Restaurant of the Hong Kong Peninsula Hotel. We invite former Head Pastry Chef and co-creator of the custard mooncake, Chef Yip Wing Wah, to fill us in on the story behind this famous mooncake. 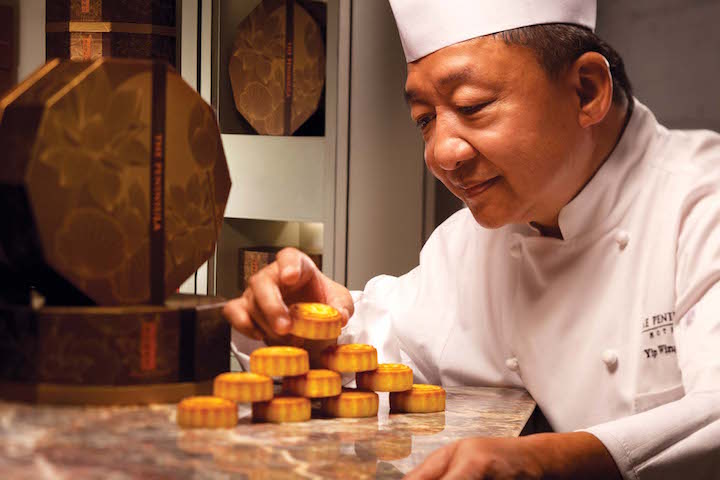 The best way to recount the rich history surrounding Spring Moon Restaurant's custard mooncake would be to delve into its intense press coverage in Hong Kong's local newspapers.

In the past few years, there have been a number of conflicts arising from the mad rush to purchase the custard mooncakes, with one particularly memorable case taking place in 2011, when the hotel was engaged in online and phone pre-order sales for their mooncakes. The mooncakes were sold out on the very first day sales began, resulting in a massive number of disappointed customers. As a result, a huge waiting crowd formed at the hotel on the day of actual sales for the mooncake coupons, with some even taking turns to queue from the wee hours. The crowd was so big that it blocked out the entire eatery level of the hotel, causing all the other restaurants in the hotel to be closed for that afternoon.

Even after the coupons were sold out, many refused to leave, resulting in the hotel having to make compensations to put an end to things, causing quite a stir in the process. Most recently, a police report was made after a commuter had his mooncakes stolen on the bus, causing the mooncakes to make Hong Kong's news headlines once more.

The custard mooncake made its debut in 1986

So how exactly did this raved-about mooncake come into being? As one of the pioneering staff members of the restaurant, Chef Yip recalls that in the 1980s, few hotels in Hong Kong had Chinese restaurants. In the midsummer of 1986, the Peninsula Hotel opened the Chinese Spring Moon Restaurant, and the first major event that followed after the restaurant's establishment was Mid-Autumn Festival.

During that time in Hong Kong, Mid-Autumn season was a period when the market for traditional mooncakes was fiercely competitive. Some traditional restaurants would even set up in-house confectionaries to create different pastries. Spring Moon Restaurant had no confectionary at that time, and no traditional mooncake-making pastry chef either, and they wondered how they would be able to compete during the festive season.

"Peninsula Hotel has always followed a more Western path, so it got our group of chefs thinking that maybe we could add a few Western elements to Spring Moon Restaurant as well. So, we began by adding custard to some of our dimsum in place of lotus, creating custard buns in the process, and that ended up being a real hit with diners. So, we thought to ourselves, why don't we use custard to make mooncakes too?" said Chef Yip.

Their greatest challenge was that the custard did not go well with traditional mooncake skin. "Hence, we thought to use a Western cookie crust, which we felt it would go much better with the custard. The custard mooncake was born that same year, and we gave it out to diners during Mid-Autumn Festival to express our well wishes toward them."
Advertisement 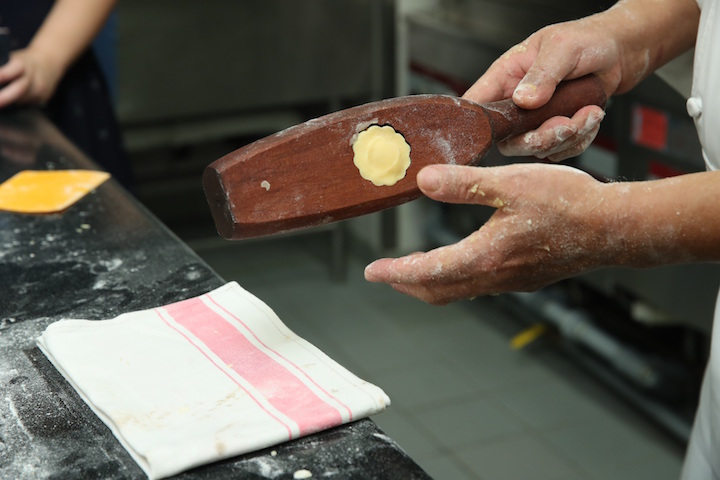 The creamy custard is encased in a Western-style cookie crust
10,000 boxes were made in the first year

When the custard mooncake first made its appearance in 1986, it was sold only in the restaurant where it received an overwhelming response. In 1987, Spring Moon Restaurant released it for retail as well. Even though production was limited to 10,000 boxes, it was nonetheless a huge undertaking for the restaurant, as an immense amount of additional manpower and resources had to be invested to see production through to completion. Hence, even though the mooncakes were sold out at lightning speed, the restaurant was unable to have more produced to meet the demand.

Chef Yip recalls, "Back then, not only did we have to hire temporary helpers to assist with production, even kitchen hands had to be roped in as well, as everything was hand-made. Furthermore, because the ovens could not be overused, we were not allowed to continue with production overnight."

Fresh out of the oven

The key to creating a nice custard mooncake lies with the control of the oven temperature, explains the chef. "The cookie crust has to be crispy but not easily crumbled. Also, the custard needs to be perfectly moist. Do not belittle the process of oven-baking simply because it's the final step, for this step can very well make or break the entire production process."

In one particular aspect does the custard mooncake stand apart from traditional mooncakes. Most traditional mooncakes cannot be eaten immediately after baking. It takes a few days of rest for the mooncake's skin to turn oily so that it will taste better. The custard mooncake, on the other hand, tastes best fresh out of the oven. For a few of the initial years, Spring Moon Restaurant served freshly-baked custard mooncakes in the restaurant during Mid-Autumn season. However, with mooncake sales increasing each year, the chefs were unable to continue serving up freshly-baked mooncakes alongside the retail orders, which is truly a shame. 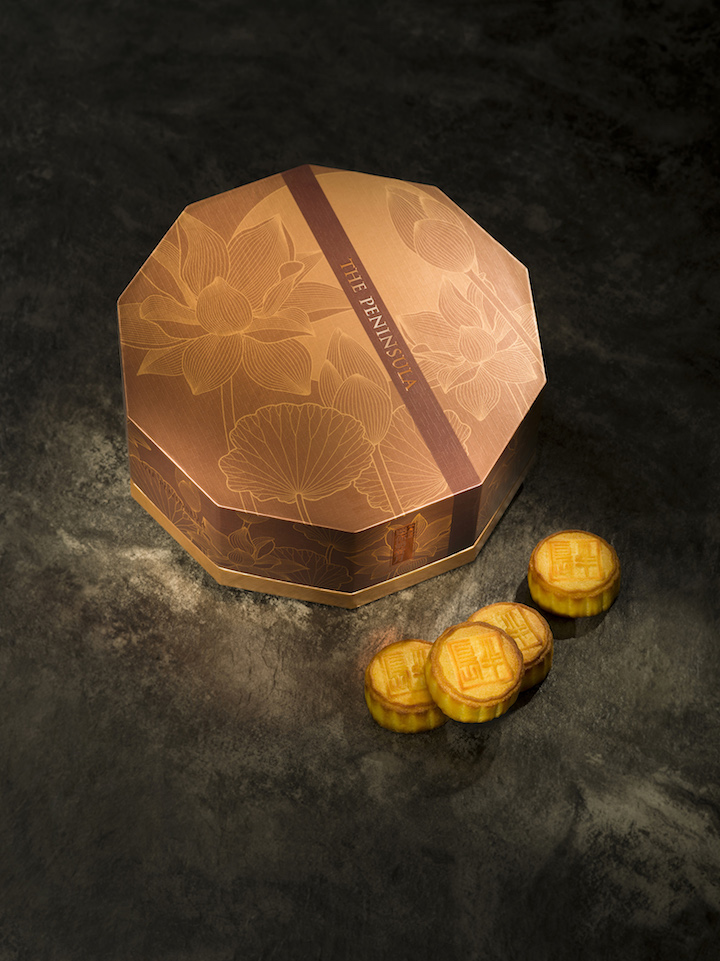 Amongst these, the otherwise most popular would probably have to be the custard mooncakes from Kowloon Hotel. Because the hotel used to belong to The Peninsula Group, they made their custard mooncakes using the same recipe as the original at Spring Moon Restaurant. Even though many years have passed and the hotel has since left the group, many foodies still believe that the hotel's custard mooncakes bear the the most similar to the original.

Today, the mooncakes from Spring Moon Restaurant remain highly in demand, while creator Chef Yip has since retired and assumed the position of consultant to the Peninsula Boutique. Chef Yip released a brand new mini durian and custard flavoured mooncake last year, using D24 durians in its production, with the creamy texture of the durian blending perfectly with the custard. This year, he has came up with the creation of mini lychee and custard flavoured mooncakes, seeking to infuse the fragrance of lychees into the mooncakes, bringing this East-meets-West delicacy to a whole new level.
Advertisement
Advertisement