Since moving to England at the age of two, Elle Lau fell in love with the English culture of sipping tea and nibbling on pillow-y scones served on fine bone china with a dish of clotted cream. The founder of Blooms Tea, who shuttles between Hong Kong and London, is known for selling European porcelain and antiques, and bridging the gap between East and West through art and design.

We speak to her to find out more about the finer details of afternoon tea.
Hi Elle! What's the difference between afternoon tea and high tea?

Afternoon tea is typically served in the mid-afternoon and it was traditionally served on low tables, hence its two names. It involves things like manners, lace, and dainty foods. Historically, afternoon tea was considered to be a ladies' social occasion, and it is more often enjoyed by women than men to this day.

Traditionally, high tea was a working-class meal served on a 'high' table at the end of the workday, shortly after 5 p.m. High tea is a more substantial meal that includes more hearty savoury foods such as meaty pies, fishes such as pickled salmon, baked vegetables and cheesy casseroles. 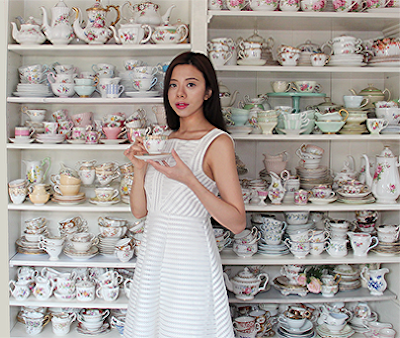 What would I usually eat during afternoon tea?

An afternoon tea menu is light and focuses on scones, finger sandwiches. Marmalade, lemon curds and jams. A three-tier tea stand (note: not cake stand) is usually used to display the foods from savoury upwards to cakes and sweets.

In the earliest years of the tea stand's history, the top tier was reserved for scones, which were kept warm by a silver warming dome.
Advertisement
The middle plate held sweets like petits fours, marzipan, and cakes. The bottom tier was the serving station for simple and crustless sandwiches. Cake stands were also introduced during the late Victorian era to showcase their perfectly formed Victorian sponge cakes!

Favourite teas include black teas like Earl Grey and Assam as well as herbal teas like chamomile and mint.

How do I throw the perfect afternoon tea party?
For a good tea set you need to have balanced flavours. Juxtaposing heavier food like meats with lighter seafood. Classic afternoon tea finger sandwiches include egg salad, cucumber, smoked salmon and roast beef.

Scones can be either plain, sweet or savoury. Sweet fruit scones need to be very subtle to accommodate cream and jam. Ideally, your sweets menu will include a variety of flavours, such as seasonal fruit (or, in the cooler months, preserves), cream, vanilla and/or chocolate. 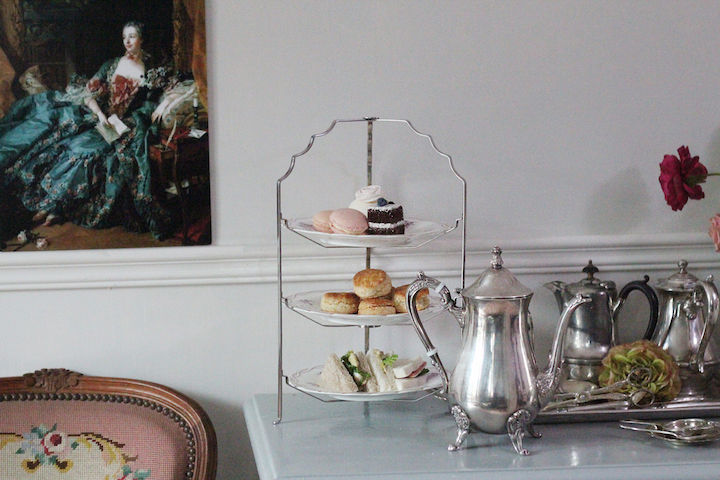 How would you pair the food with tea?
Black tea has a full and robust flavour, therefore the foods that go best with it should ideally be the same as you don’t want one flavour to dominate the other. Teas such as Ceylon and Darjeeling, which have smooth and citrusy flavour, perfectly enhance sweet desserts such as a cheesecake. Green tea has a subtle vegetative flavour to it, making it the perfect companion to mild flavoured foods such as seafood or chicken.

Is there a table etiquette to observe during afternoon tea rituals?
Over the years there seems to have been many quirks of etiquette whilst taking tea. Once sitting, your purse must be placed on your lap or behind you, against the back of the chair, out of view. Unfold your napkin and if you are leaving to ‘powder your nose’ and returning, place your napkin on your chair.

There is one designated tea pourer on the table and they will serve each guest throughout the afternoon. Serving the highest-ranking person or most senior member first. 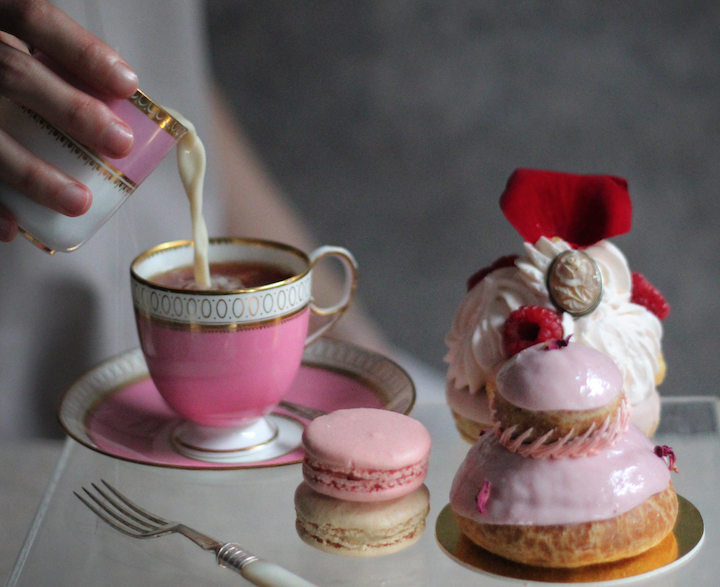 Is there a right way to have your cup of tea?
Always tea first, then milk if needed. Stir from 6 o'clock to 12 o'clock back and forth, not in a circular motion. Once you finish stirring, place the tea spoon at the front of the saucer. The spoon should always be placed on the saucer at all times. Eat from bottom of the tea stand upwards. You can use your fingers. When eating sandwiches, start from the lightest fillings first such as salmon or cheeses, then move onto heavier meats such as beef etc. For the scones, you should pick it up and twist it with your hands to break it into smaller pieces. Think of it like bread in a restaurant, you never cut it with a knife. Applying clotted cream then jam is the Devon way to do it and applying jam followed by clotted cream is the Cornish way of eating scones. Both are correct.

Tell us something fun you know about the history of afternoon tea.
Tea was first drank in China during the Han dynasty. During 1660s Queen Catherine bought Tea to England. She loved drinking it in her bedroom parlor.

Afternoon tea was introduced in England by Anna, the seventh Duchess of Bedford, in the year 1840. The Duchess would become hungry around four o’clock in the afternoon. The evening meal in her household was served fashionably late at eight o’clock, thus leaving a long period of time between lunch and dinner. The Duchess asked for a tray of sandwiches, cakes and tea to be brought to her room during the late afternoon. This became a habit of hers and she began inviting friends to join her.

This pause for tea became a fashionable social event. During the 1880s, upper-class and society women would change into long gowns, gloves and hats for their afternoon tea which was usually served in the drawing room between four and five o’clock.
Advertisement
Advertisement

Ask the Expert: What's The Difference Between Japanese and Australian Wagyu?

Like wine, the location of a cattle farm within a country can greatly affect the quality and flavour of the beef it produces

Ask the Experts: A Beginner’s Guide to Whisky

When it comes to tasting Scotland’s best known drink, there are a few fundamental guidelines to follow to fully appreciate good whisky.

Ask The Experts: What's The Best Way To Cook Wagyu?

We get chef Andrea Spagoni of one-Michelin-starred Beefbar to share his tips on keeping this cut of beef at its prime.

Ask The Experts: How To Keep Pastries Crisp in Humid Weather

Illustrious pastry maestro Will Goldfarb of Room4Dessert shares his secret recipe for keeping meringues crispy in the summer humidity.

Ask the Expert: How to Cook Liver

Most commonly enjoyed in the form of foie gras, liver remains one of the tastiest innards. Here are a chef’s tips on how to prepare and cook it right.

Ask the Experts: How to Taste Wine From The Barrel

Take your cue from the winemakers.