Some eyebrows might be raised if dried shiitake mushrooms are missing from a celebratory feast during the Chinese New Year, as the shiitake is especially prominently featured in Cantonese cuisine. Steamed with pork patties or chicken, braised with oyster sauce, stacked among the many layers of poon choi, there are countless ways to extract the deep flavours from the aromatic fungus.

Since it’s such a symbol of the festive season, dried shiitake is naturally a popular gift for Chinese New Year. But here comes the question: As you take a walk down the shops in Kennedy Town selling dried Chinese gourmet ingredients, pile after pile of mushrooms in all sizes and thickness, wait. Choosing the most appropriate mushrooms for your use isn’t always so easy. We got in touch with someone who has extensive experience in this field to walk us through what we should look for. 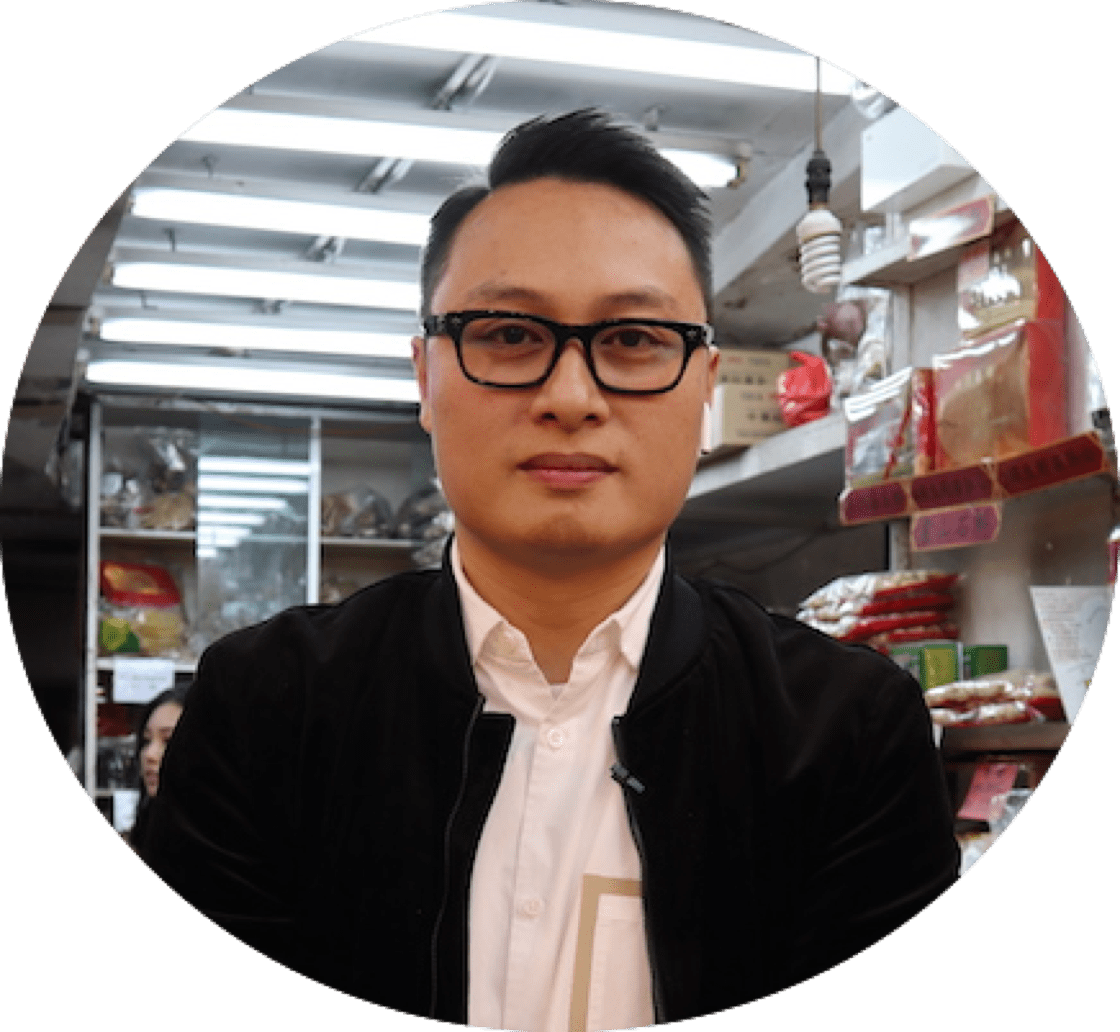 Albert Lee is the third-generation owner of the dried Chinese gourmet shop Tung Cheong. It was founded in Guangzhou in 1915 and subsequently moved to Kennedy Town in the 60s. When Lee took over, he brought in modern marketing strategies to keep the century-old brand at the forefront of the business. Its Facebook page has more than 70,000 followers and contains videos that teach viewers to distinguish the quality of dried goods.

Mostly imported from Japan and China, there are many varieties of dried shiitake with varying characteristics. Lee gave us an overview below:
How Many Types of Shiitakes Are There?

The dried shiitake mushrooms available in Hong Kong can be catergorised by their origins and forms. Most of them are imported from China, followed by Japan and Korea. Shiitake mushrooms grow around trees and are nourished by them. The nutrients, along with weather, determine the form of the mushrooms. There are more than 10 types of shiitake based on their key traits. From the highest quality to the lowest, they are flower mushrooms, thick mushrooms and winter mushrooms.
Advertisement 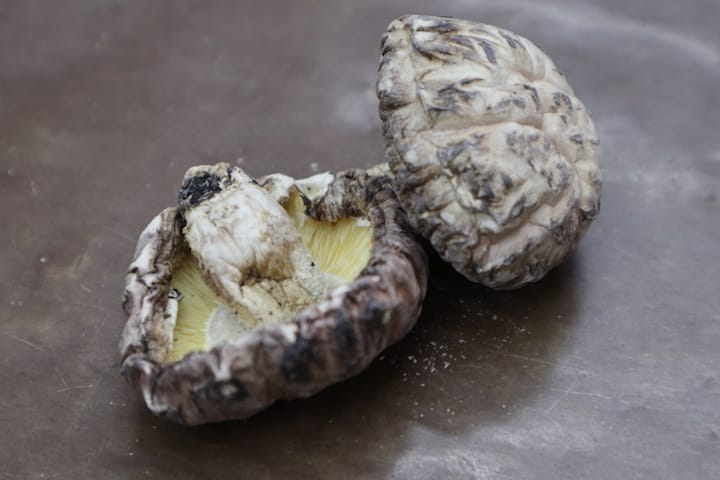 Tea flower mushroom. (Credit: Chen Jia Nan.)
Which Variety Is the Most Delicious?

Other than a smooth texture, good mushrooms should smell rich and sharp. Growing from a quality, well-nourished tree, the shiitake would understandably be bigger and taste better. In addition, cold weather helps the shiitake to conserve nutrients. If there is frost or low humidity, the mushroom cap would crack and its fragrance would be intensified. That’s why a large, thick and rough mushroom with “baau fa” is more prestigious.

Origin and storage time are also important factors of consideration. In general, the Japanese shiitake is the best. Korean shiitake ranks second, and the Chinese ones third. The mushrooms are best eaten within a year of its harvest. The longer it’s kept, the more the fragrance disappears. Further to that, even dried shiitake carries a small amount of moisture. It could get mouldy after for an extended period. 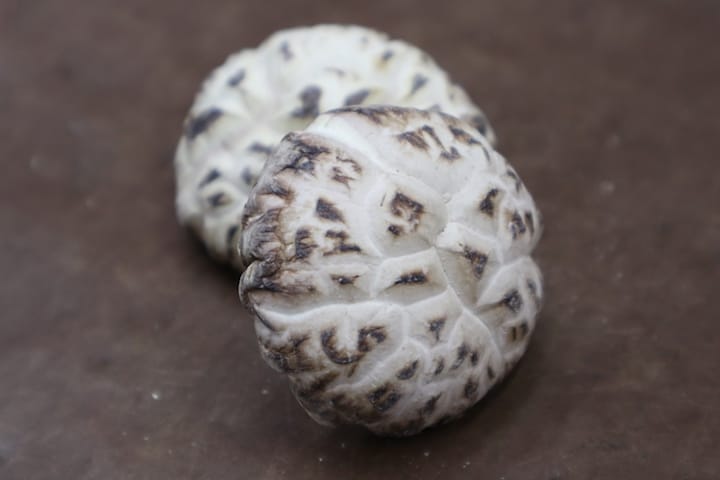 White flower mushroom has the highest level of “baau fa,” or cracks in the mushroom cap. (Credit: Chen Jia Nan.)
Is the Mushroom Better if It’s More Expensive?

It depends on how the mushroom is paired with which food. For steamed fish, it’s not fitting to use shiitake that tastes too strong because it would overshadow the fish’s flavour. A lighter mushroom would be better in this case. Old Cantonese recipes call for a shiitake variety named “Xiangxin.” It’s grown in a short amount of time due to warm weather, with the temperature rising above 20°C for more than 10 days in a row. Xiangxin’s texture is cheaper ($70/catty) and less soft compared to flower mushroom. But the light fragrance is a great match to steamed fish dishes. If you have large and thick mushrooms in hand, braising is the best method of preparation to keep them smooth and tender. 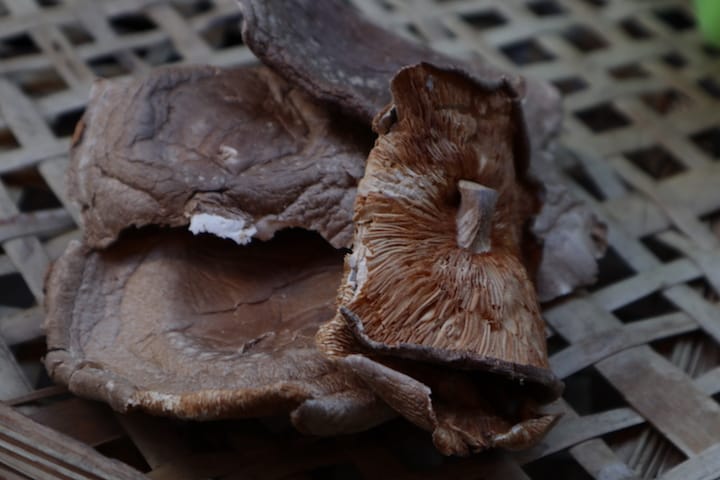 Xiangxin mushroom is most suited for steamed fish dishes. (Credit: Chen Jia Nan)
Should We Buy Heavier or Lighter Mushrooms?

Between two mushrooms of the same size, choose the one that is lighter. Dried shiitake has 5 to 7 percent of moisture, and heavier mushrooms have higher moisture content. When the humid weather hits, those would be more prone to get moldy. Lightweight mushrooms indicate the drying process was done better, and its aroma would be more stable. While you’re at the shop, try to pick up the mushrooms and compare them.

Is Japanese Shiitake Superior to Others?

That’s correct. In Japan, the mushroom growers drill holes in a whole piece of wood and plant the hyphae of the shiitake inside. Afterwards, they move the wood to a humid spot in the forest and water it regularly. In cold weather, the growers would cover it up to ensure the steady growth of the shiitake.

The other regions grow shiitake on mixed wood shavings in a plastic bag, which is placed in the greenhouse. The benefits of this approach are the short growing time and large amount of output. But that can’t compete with the nutrients Japanese shiitake get from an intact piece of wood and the natural surroundings. You can smell the difference when you put the Japanese shiitake close to your nose.
This article was written by Chen Jia Nan and translated by Vincent Leung. Click here to read the original version of this story.
Advertisement
Advertisement