Some dishes have changed over time. Following the movement of human population, they are influenced by other cuisines or blend into a new environment. One of those dishes is two-faced pan-fried noodles, or liang mian huang. 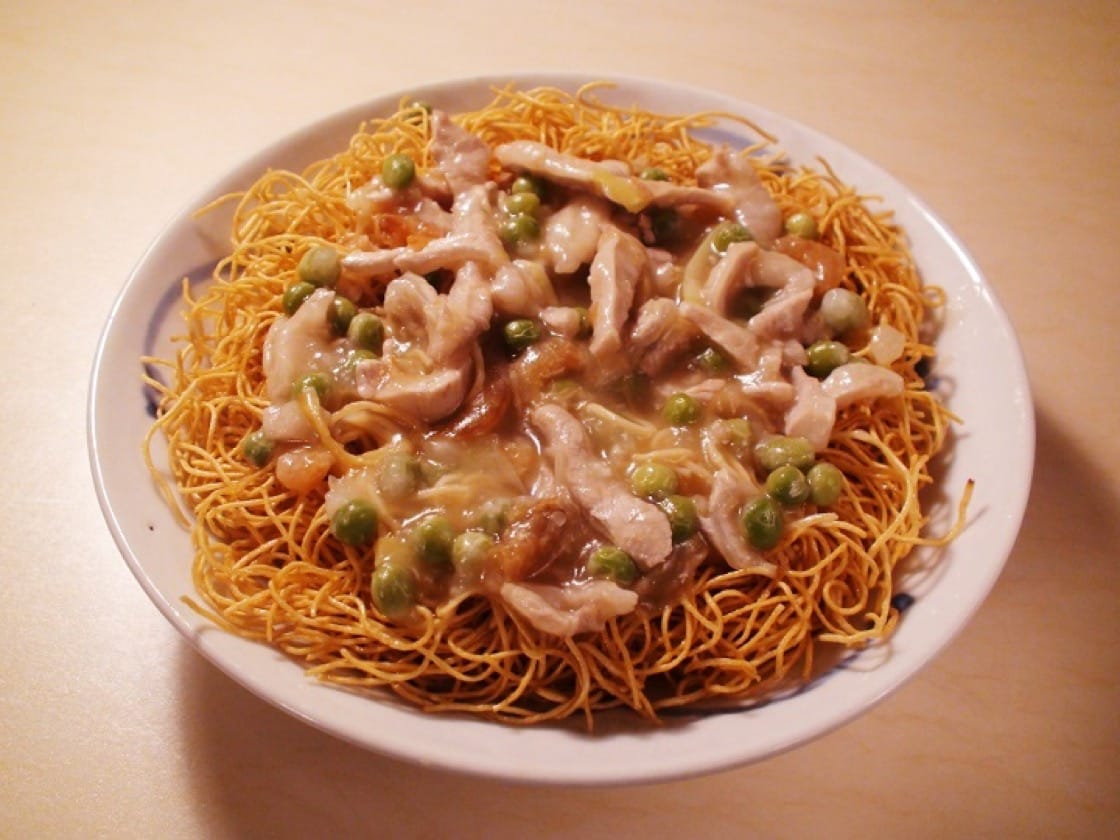 Originally, liang mian huang was a kind of dry fried noodles that was widespread in Shanghai and Suzhou.（Photo: Man Wai Leung）

Originated From Shanghai And Suzhou

Liang mian huang started out as a traditional noodle dish from Shanghai and Suzhou. In the South of the Yangtze River, noodles are usually served in broth. But the dry liang mian huang provided diners a popular alternative. It boasted the moniker of “the king of noodles” and was served in famous noodle joints such as Guan Zheng Xing and Zhu Hong Xing in Suzhou.

Basically, the dish is dry pan-fried noodles. Cooked noodles are fried in a pan — they slowly turn golden and crispy on low heat. The name liang mian huang (which literally translates to two sides yellow) refers to the hue of cooked noodles on both sides.

Though crispy outside, the interior of the noodles is still moist. Freshly stir-fried ingredients – usually sliced pork or shrimps mixed with other ingredients – are poured on top at this point. The hot, thick sauce slowly penetrates every thread of the crunchy noodles. Besides the wonderful taste, the noodles’ double-layered texture is the dish’s most desired trait. 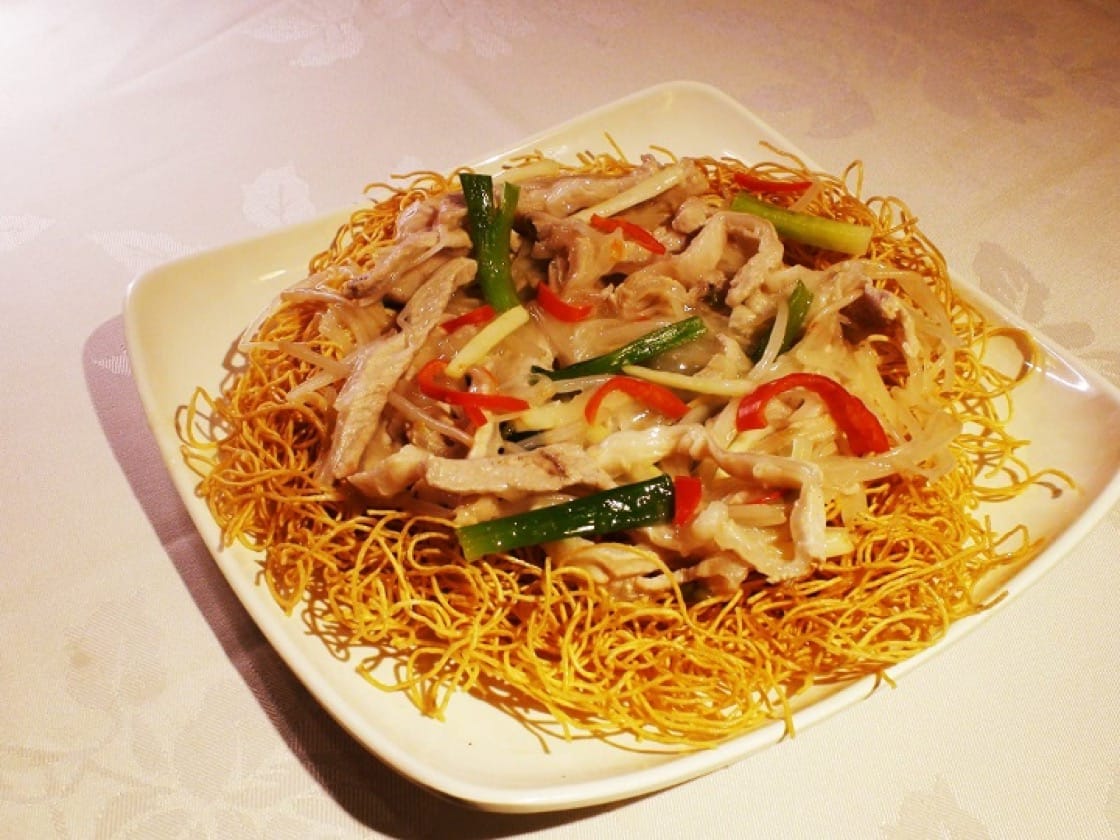 Upon arriving in Hong Kong, the delicious liang mian huang did not take long to get popular among the Cantonese and Teochew communities. Traditional Cantonese fried noodles are made from stir-frying, but with a wave of Shanghainese immigrating to Hong Kong in the middle of the last century, it slowly adopted the approach of liang mian huang. Some said Run Run Shaw, Chan Din Hua and other tycoons of Suzhou-Zhejiang origin would specify to have their noodles fried in liang mian huang style when they went to eat dim sum. Since then, cooks began to adapt the technique of frying noodles on a wider context.

At that age, famous tea houses like Luk Yu and Lin Heung all served Cantonese noodles sizzled in a pan instead stir-fried in a wok. This method represented the taste of the Shanghainese businessmen, who were seen as connoisseurs in the gastronomic world. Many Cantonese cooks followed suit, and this played a big role in how Cantonese fried noodles are made now.

Cantonese fried noodles were once pan-fried to achieve a crunchy-outside, soft-inside texture. Yet this painstaking cooking method has been replaced by more time-saving deep-frying nowadays. Cooked in a wok full of oil, the noodles come out gilded and crispy. A sauce with slices of pork, shiitake mushroom, spring onion along with garlic chive and bean sprout flavours the noodles. The dish is finally served with Chinkiang vinegar. Part-crunchy part-soft, the noodles tastes incredible with an additional kick from the pork and vinegar. 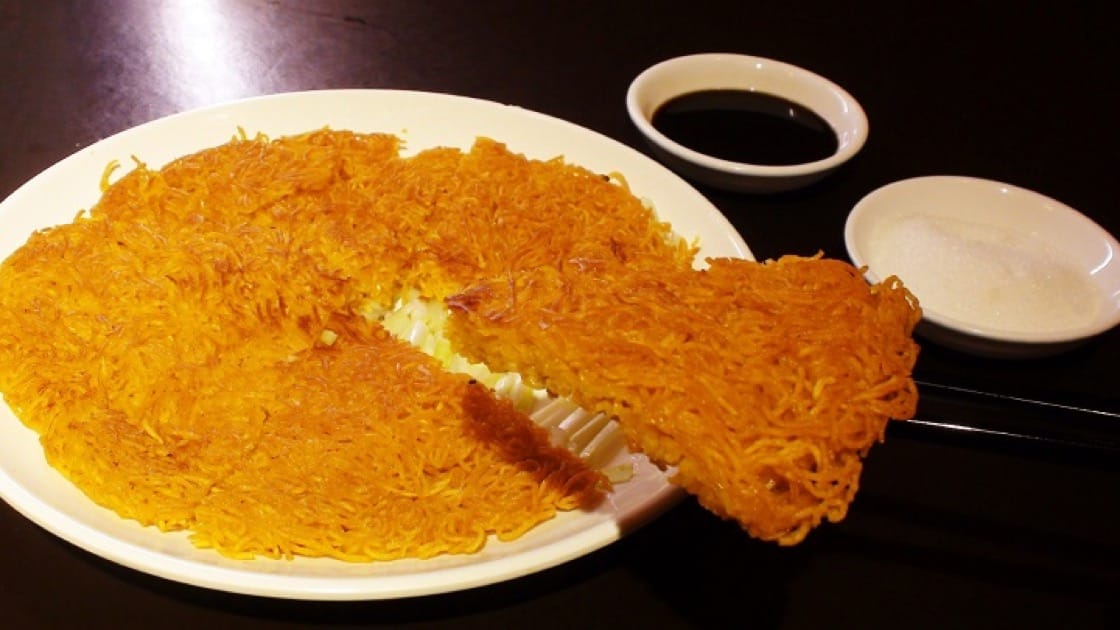 Teochew-style liang mian huang is crispy and soft at the same time. Dipped into aged vinegar and sugar, the sweet and sour kick offsets the heaviness of the noodles.（Photo: Man Wai Leung） 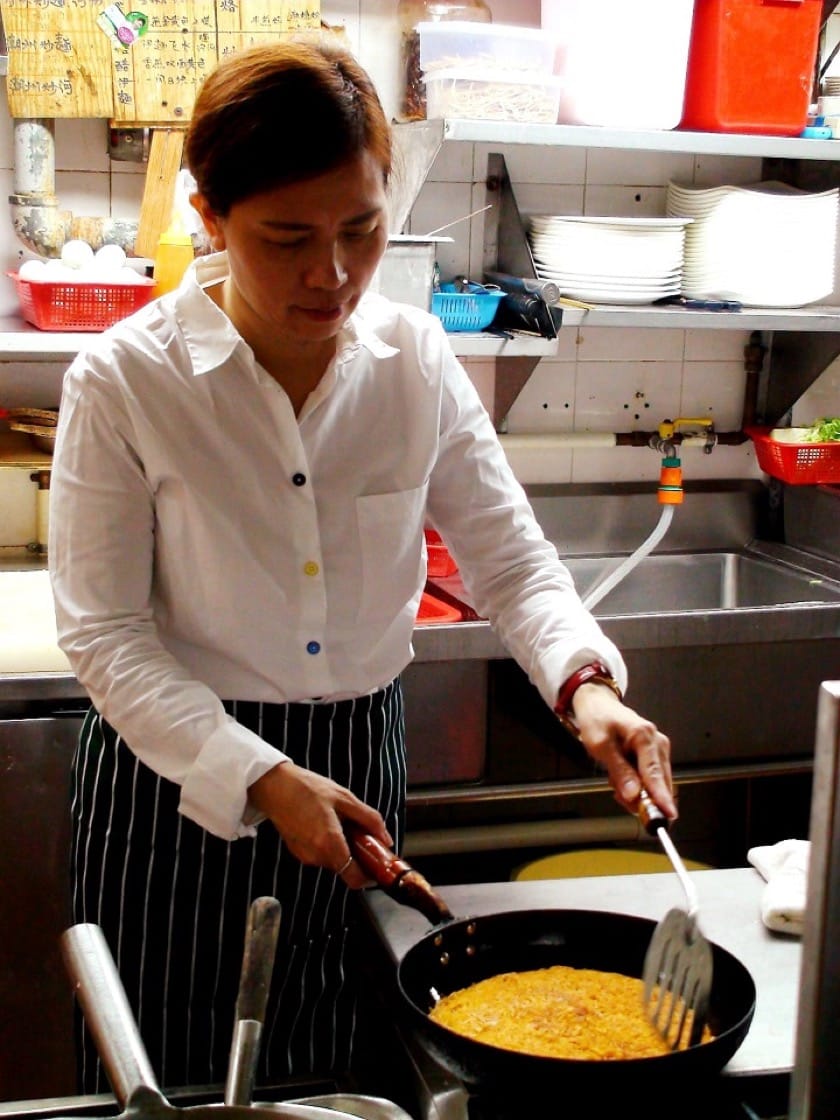 When it comes to Teochew noodles, liang mian huang is considered as a yardstick. What is now called Teochew liang mian huang was originally called sugar and vinegar noodles. Chef-owner Or Yat Ying from Wah Yuen Chiu Chow Restaurant, who has more than thirty years of cooking experience, knows the whole story about this.

“Sugar and vinegar noodles are also pan-fried, but only on one side, unlike Shanghai liang mian huang which is fried on both sides. In the old days, the Shanghainese diners who went to Teochew restaurants asked for the noodles to be cooked crispy on both sides. Teochew people followed suit, and slowly changed the way sugar and vinegar noodles were cooked. Since then, people began to call it liang mian huang.”

Instead of regular egg noodles, Teochew noodles called for duck eggs. Combined with flour, the noodles have a deep aroma of egg and a springy texture.

The cooking process is an act of finesse. The raw noodles are first dipped in hot oil till it is 70 percent cooked. The noodles soak up flavours of the broth, before it is pan-fried (on one or two sides) to a golden hue and crisp texture. The interior of the noodles is kept soft to provide a pleasant contrast to its crisp exterior. Aged vinegar and sugar are added to the noodles before it is eaten. The sweet and sour kick stimulates the diners’ appetite and reduces the heaviness caused by deep-frying. The vinegar draws the fresh flavours of the broth residing in the noodles. Savoury and sweet at the same time, this time-honoured dish is a sensation.

The First Day We Got Our Stars: Romain Chapel

The son of legendary French chef Alain Chapel is making his own mark in Asia with restaurant Le Comptoir De Pierre Gagnaire In Shanghai.