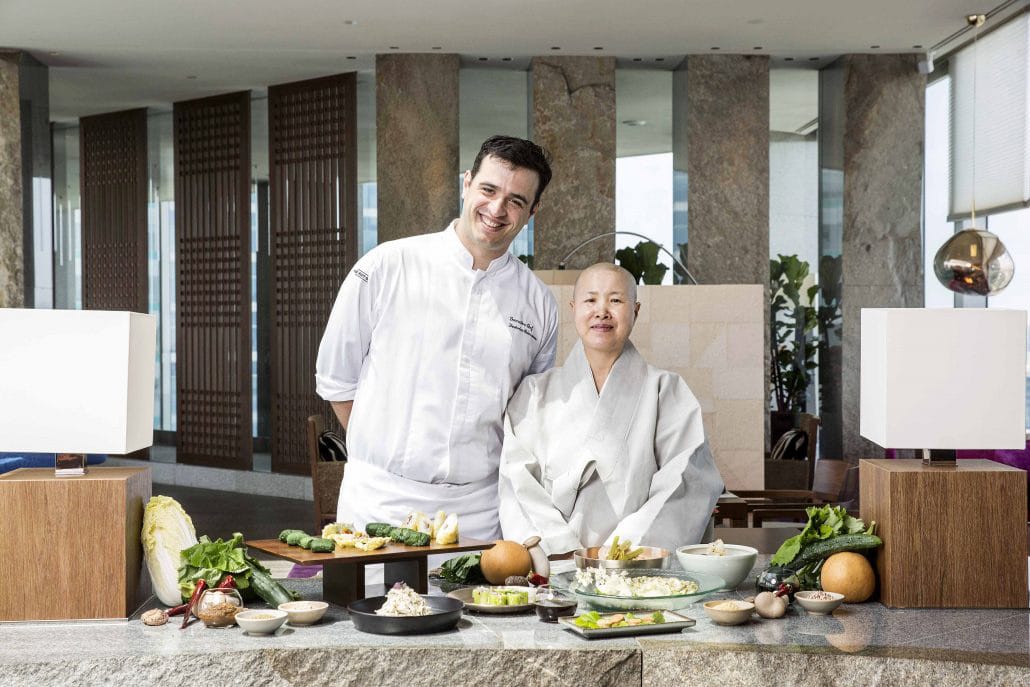 The number of foreign chefs in Korea is on the rise, but the chances of finding them dishing up authentic Korean cuisine is pretty close to nil. Federico Heinzmann, the executive chef at Park Hyatt Seoul, is a rare and welcome exception.

The Argentina native first joined the Park Hyatt brand as a chef de cuisine in Buenos Aires in 2006. From there, he went on to helm Park Hyatt Seoul’s Cornerstone restaurant and Park Hyatt Tokyo’s New York Grill and Bar. In February, he returned to Seoul – a city he affectionately refers to as his second home – to fill a bigger role with greater responsibilities.

As the executive chef, Heinzmann is in charge of supervising the hotel’s day-to-day food and beverage services. His responsibilities include overseeing the operations of Park Hyatt Seoul’s three restaurants—Cornerstone, The Lounge, The Timber House—as well as room service and banquets.

Prior to taking up residence in Asia in 2012, the veteran chef of 20 years worked in kitchens all around the world, including the 3 Michelin-starred Martin Berazategui in Spain. He is proficient in French, Italian and Spanish cuisine, and is currently working to add Korean cuisine to his résumé.

Heinzmann’s passion for Korean food, particularly fermentation, is well known in the local food industry. Since his arrival, he has been fully immersed in studying Korean cuisine, dedicating much of his time to learning the art of fermentation and temple cuisine from the Venerable Sunjae, the first Master of Temple Cuisine designated by the Jogye Order of Korean Buddhism.

With his team of chefs, he practices and experiments every chance he gets, fermenting everything from soybeans and cabbages to apples and pine needles in traditional onggi (earthenware vessels used for storing and fermenting food). In his free time, he scours the country in search of seasonal ingredients and studies them exhaustively.

Along with fermentation, his latest Korean food obsessions are black beef and black pork from Jeju Island, prized for their superior flavor and quality. As a lover of food-related stories, anecdotes and history, he tirelessly engages with local purveyors and chefs to get a deeper insight into the world of Korean cuisine. With an inquisitive mind and fresh eyes, he constantly challenges his chefs to rethink everything they know about Korean food.

Heinzmann says he believes Korean food has barely scratched the surface of how much it can potentially offer to the global food scene. He also believes that foreign chefs like himself can contribute to making a difference. 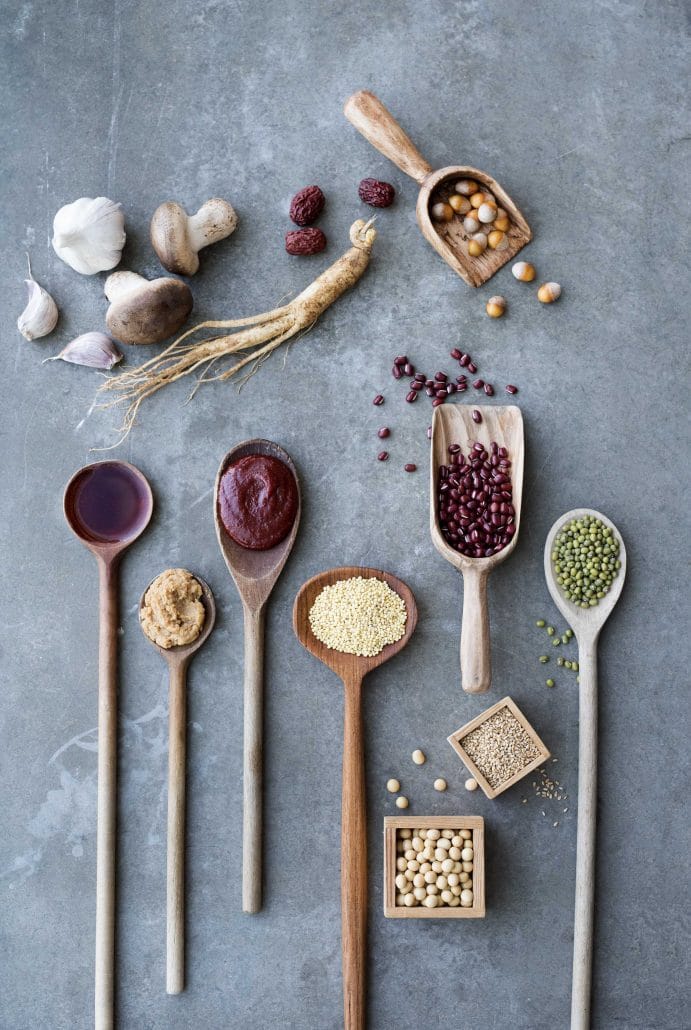 Fermentation. It seems like everyone who cooks is into it nowadays.

Fermentation is happening all around us – even in our bodies. People need to realize this when they talk about fermentation in food, be it yogurt, wine, vinegar, cheese, bread or kimchi. Fermentation is not some passing trend. Humans have been fermenting food for thousands of years. It is also a vital part of life.

As a chef, I come face to face with death every day. One day, I looked around the kitchen and I felt ashamed. Chicken, beef, pork, fish – everything was dead. It made me rethink food all over again. Then I looked to identify the ingredients that were still alive – fresh vegetables, for instance, although they were getting older with each passing second. Fermented foods like yogurt and cheese are living foods, too.

The living and the dead have different energies. I thought, why not combine these two energies together to create a balance?

What is the appeal of fermentation to you, personally?

It’s kind of like turning something flat into something three dimensional. As a chef, I am constantly thinking about what I can do to improve a dish – textures, colors and flavors. I am also thinking of ways to preserve the vibrant living energy of an ingredient as much as possible – like chopping vegetables at the last minute.

I started to study fermentation because eating well is all about the balance of energies. Many will choose to ignore the importance of this balance. But, as somebody who cooks for other people, I choose not to.

The onggi, which are traditional earthenware jars Koreans have been using for thousands of years to store and ferment foods. It really is the perfect vessel for fermentation. Koreans refer to onggi as “jars that breathe” because they are covered with micro pores ideal for slow fermentation. Food and alcoholic beverages that have been fermented in onggi have a depth of flavors that are insanely complex. In the onggi, things move really slowly, and that is a good thing.

Also, different regions have different microbes. Korea has its own indigenous microbes that make fermented foods like kimchi taste the way they do. These microbes are everywhere – in the water, in the soil, in the air. That is why kimchi made outside of Korea just won’t taste the same. Korea has the ideal “terroir” for kimchi making.

What have you been fermenting recently?

My chefs and I are experimenting with a bunch of ingredients. We’ve been fermenting apple juice, pine needles (for tea) and soybeans (for fermented soybean paste and soy sauce). This is only the beginning, though. I have so many ideas I want to play around with.

How do you use Korean jang (fermented soybean paste, fermented chili paste, soy sauce) in your own kitchen?

In the summer, I roast peaches with a gochujang glaze. It’s so delicious. Prawns and gochujang go really well together, too. The sweetness of the gochujang brings out the natural sugars in the prawns.

You have an incredible passion for Korean cuisine. Was it an instant attraction or did it take time?

When I tried doenjang (fermented soybean paste) for the first time, it felt like I’d been hit with something. It was strong and really different. Although I have come to love it, I still think it’s a tricky ingredient to incorporate into Western cuisine. But, I think it can be done. It’s up to chefs like me to unlock that door to make Korean food more accessible to foreign palates.

How do you study Korean food?

I talk to my chefs all the time. I travel to farms. I research online. I talk to other chefs. 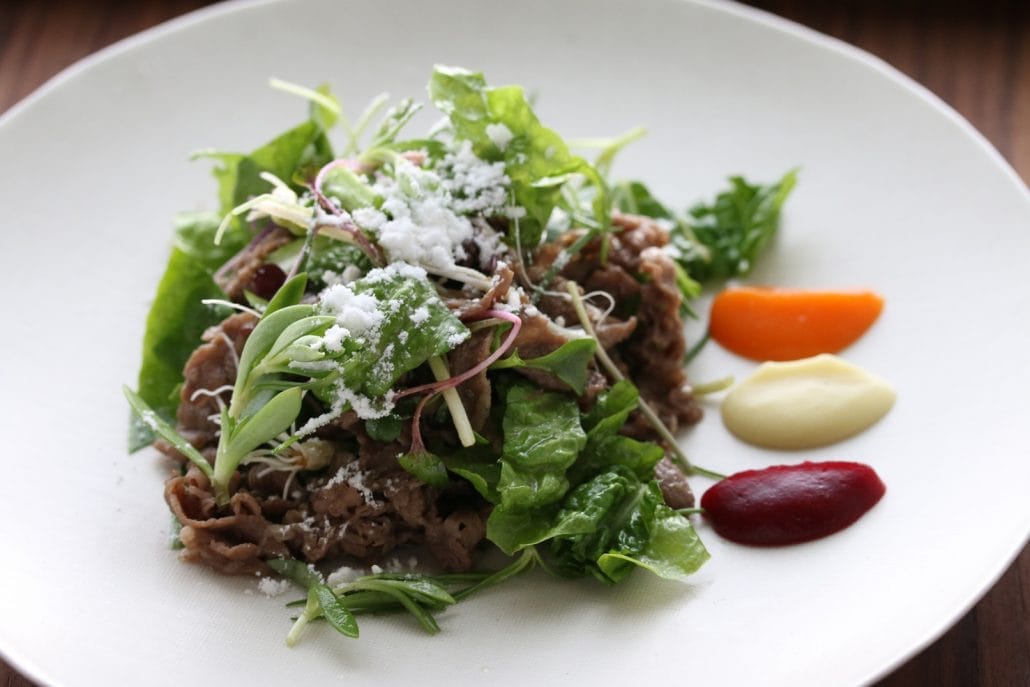 What are your top favorite Korean dishes?

There are so many! I love mandu (dumplings), mul-kimchi (kimchi in drinkable brine) and gujeolpan (a platter of 8 prepared ingredients served with crepe-like pancakes). In the summer, I love eating japchae (translucent sweet potato noodles with sautéed meat and vegetables) and kongguksu (cold soy-milk noodle soup).

What do the food cultures of Argentina and Korea have in common?

Food is a social expression in both cultures. Argentines love gathering with friends and family with food as the main activity. A big group of people and a charcoal fire is what we call home.

What have you come to love about the Korean food culture?

Koreans have an obsession with eating seasonally. In addition to the four distinct seasons, the 24 sub-seasons dictate what to eat when. For example, doenjang is traditionally made on the day of the first full moon on the lunar calendar. There is a sense of “being prepared for the next season” which I find fascinating.

I once asked three different Buddhist monks how they decide what they will cook for the day. They all gave me the same exact answer: food that is beneficial to the health, food that helps them with their daily ascetic practices, and food that is seasonal. Monks decide what to eat based on these parameters.

I love the sense of community in Korea which extends to the food culture. A great example is gimjang, which is the process of preparing large quantities of kimchi to eat through the winter. Families, communities and even villages get together to take part in this annual affair.

Overall, Koreans have a passion for food that is hard to rival. They really get excited about it.

As a chef, is it an exciting time to be in Korea?

Definitely. Change is everywhere. Young chefs are out there doing exciting new things. Koreans are increasingly looking to tradition and wisdoms of the past to move forward. That is how it should be.

What advice would you give to young chefs looking for inspiration?

If you want to be a fine dining restaurant, be one; don’t pretend to be one. That means respecting nature. Chefs are essentially the middlemen between nature and people; our job is to manipulate what nature gives us. For chefs, cooking should always start at a farm or in an ocean or in nature. Go to the sources to find ingredients; once the ingredients reach the market, their quality has already suffered.

Also, the best ingredients are not necessarily the most expensive ingredients, but the right ingredients. Something as ordinary as black pepper can taste sublime if you make the effort to find it.

The First Day We Got Our Stars: Lee Jiwon

Chef Lee Ji-won tells us what he thought when his classic French restaurant Aupres received its MICHELIN star for the very first time in the MICHELIN Guide Seoul 2020.

After an accident, Kim Eun-hee of MICHELIN Plate restaurant The Green Table had an awakening and found her calling as a chef. She opens up about her culinary journey.