On The Menu At The MICHELIN Guide Seoul 2020 Gala Dinner

Chefs James Park of Muoki in Seoul and Denis Lucchi of Buona Terra in Singapore share the inspirations behind their dishes for the MICHELIN Guide Seoul 2020 gala dinner.

On 14 November 2019, Michelin officially unveiled its restaurant selections for the MICHELIN Guide Seoul 2020 guidebook in a two-part celebration held at the luxurious Walkerhill Vista Hotel Seoul.

After the anticipation-filled Star Revelation Ceremony where 2 new two-star restaurants and 7 new one-star establishments were revealed, the newly awarded chefs put on their MICHELIN chefs’ jackets and rejoined the city’s most influential hospitality industry professionals, gourmands and VIPs for a lavish celebratory dinner.

Cooking specially for the evening were James Park, the Korean head chef of one-MICHELIN-starred Muoki, Italian chef Denis Lucchi of newly recognized one-MICHELIN-starred Buona Terra in Singapore and Francesco Baek, the executive chef of Grand & Vista Walkerhill Seoul. They collaboratively designed a six-course dinner menu according to this year’s gala theme, Colorful Spirits, which highlights the passion, innovation and creativity and the differences among chefs that make up the diverse kaleidoscope of Seoul’s gastronomy. 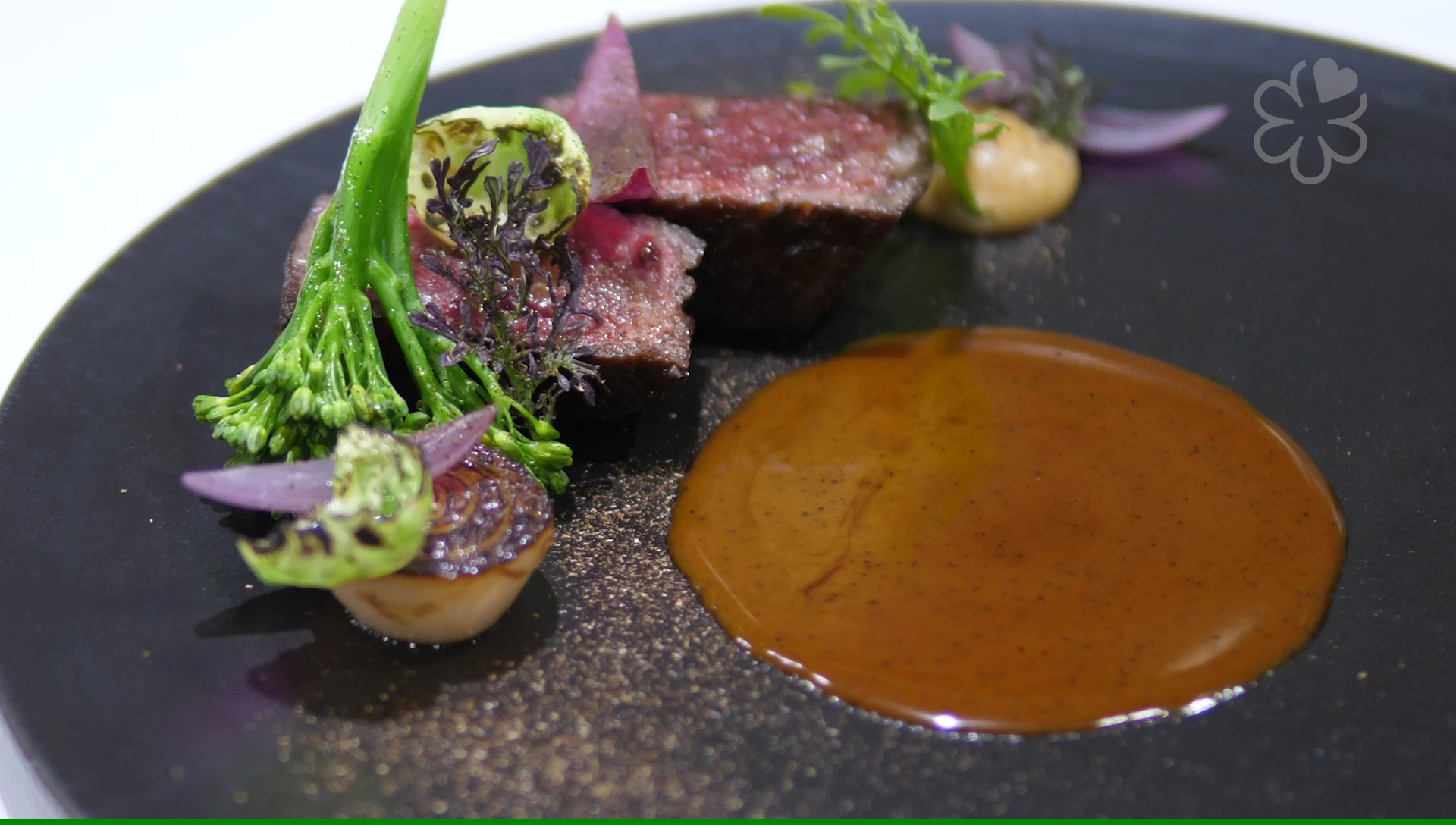 For the first course of the gala dinner, Lucchi, a native of Italy’s northern Lombardy region, presented a new spin on his restaurant’s signature dish of scallop tartare.

“We have had this dish from day one, but we always try to evolve our dishes because I believe in always pushing yourself to the next level to try to make a better dish for your customer, says Lucchi, who began his career in the kitchens of fine-dining restaurants in Rome, London and his hometown of Lake Garda before moving to Singapore more than 10 years ago. At Buona Terra, he serves elegant contemporary Italian plates crafted with prized artisanal ingredients and time-honored Italian recipes.

In line with the gala dinner’s theme of Colorful Spirits, Lucchi incorporated modern, colorful touches to the dish such as an exotic South American-style marination technique with chili, shallots and lime while tomatoes from Sicily are made into a clear liquid and transformed into a delicate jelly. “And then we finish it with a quenelle of cucumber sorbet to give extra freshness to the dish,” says the chef. “Perfect for the start of the meal.”

Born and raised in the provinces of South Korea, Park discovered his passion for cooking as a student and set out to fulfil his dreams of becoming a chef, working all around the world in countries like Iraq, United States, Britain and Australia and South Africa. “After experiencing all the different cultures, chefs, food and ingredients, I spent some time studying how to apply those experiences into cooking so that I can create more outstanding and delicious food,” he says.

Tapping on his solid foundation of French cooking techniques, Park created a foie gras dish steamed together with a chicken mousse in a cleaned eggshell. The shell is then cracked open to reveal the egg-shaped mouse and covered in a fragrant truffle cream sauce. “Even though it looks very simple, it is very delicious right from the first bite,” he says.

“My memory of Italian cuisine has always revolved around my grandma. Italian cuisine is mainly love because whoever cooks for you does an act of love for you,” says Lucchi, explaining the heart behind his second dish of saffron risotto. “I still try to do the same thing using my roots, my flavors, and what I grew up with.”

The chef’s take on a classic Risotto Milanese for the gala dinner features an infusion of Nespresso’s Exclusive Selections Kenya Milima coffee, which he selected for its earthy flavor. “I tasted a reduction of the coffee, and it reminded me of the flavor of licorice. There are a few things I really love in Italian cuisine and one of them is the combination of licorice, Jerusalem artichoke and something smoked,” he says of the inspiration behind the dish. The bright yellow saffron risotto is topped with shaven autumn black truffles flakes, which add a nuttiness to the dish.

Muoki translates to “oak tree” in the South African language of Afrikaans, and is a nod to Park’s formative years cooking at lauded restaurant The Test Kitchen in Cape Town. “I’ve always wanted to become a tree-like person whose roots are very deep in the ground so it will not be blown away even in strong winds or rain,” he explains. “I want to have the same strong roots so that I can become a strong person who has a firm direction in cooking and in life.”

Balance, the chef says, is a cornerstone of both his life and his cooking philosophy, and his main dish of Korean Beef Grilled Strip Loin best represents this. After ageing the sirloin for three weeks, he uses charcoal to impart a smoky aroma to the steak before it is grilled. Park then makes a thick and rich beef reduction with the addition of milk. This creamy “café au lait” sauce forms the main component of the dish. “The result is a very outstanding sauce which captures the idea of balance.”