One of the best times to visit the hotel (a member of the exclusive Tablet Hotels Plus group) is over the Christmas holidays, when snow covers the city’s palaces and monuments, reflecting the light from gas lanterns, while dazzling Christmas lights adorn streets, avenues and squares, giving the normally severe and neatly ordered Croatian capital a magical feel.

The Hotel Esplanade, which is easily recognisable from its neo-Classical façade with rectangular capitals perched on imposing yet delicate columns inspired by Greek architecture, lies between the Botanical Garden and Strossmayer Park, just a few minutes’ walk from the historic centre. Just as it did in the 1920s, the hotel offers travellers a harmonious mix of classic accommodation in artistic Middle European style, nowadays enhanced by the comfort of practical and contemporary amenities.

These distinct elements bear witness to the quintessential Esplanade welcome, which together with its personalised bespoke facilities, Art Deco touches, and elegant guestrooms with marble bathrooms and hi-tech gadgets providing excellent connectivity, have resulted in the hotel winning prestigious international awards, including Best Luxury Design and Best Heritage Hotel.

Another attraction of the Hotel Esplanade, which has provided the backdrop to numerous movies over the years and is said to have been Orson Welles’ favourite hotel, is the refined, sophisticated cuisine served in the hotel’s two restaurants. Named after a native grape variety transported to the United States in the first decades of the 19C, Zinfandel’s, which has been awarded the Michelin Red Guide’s Plate symbol, is one of the most elegant and innovative restaurants in Zagreb.

The restaurant was completely renovated as part of the hotel’s major restoration in 2004, a project which added even more glamour to every corner of the hotel and which enabled Zinfandel’s to welcome guests in a setting “which effortlessly combines the elegance of a bygone era with the ambience of a contemporary dining room”. After extolling the aesthetic and architectural virtues of the setting, the entry in the Michelin Guide goes on to praise the quality “of the ambitious menu which combines Croatian classics with modern European dishes, artistically presented and often with a playful element”. In summer, guests have the option of dining on the panoramic terrace, while throughout the year they can be sure of a carefully selected array of dishes including a reinterpretation of buzara sauce made with mussels and figs; mullet ceviche with fennel, rosemary and leeks ; two gourmet versions of pasta stuffed with skuta cheese ; duck breast served with bulgur wheat, sweet potato purée and sour cherry semifreddo ; and for dessert, warm pear sponge with white chocolate, almonds, cinnamon, butterscotch and crème fraiche. 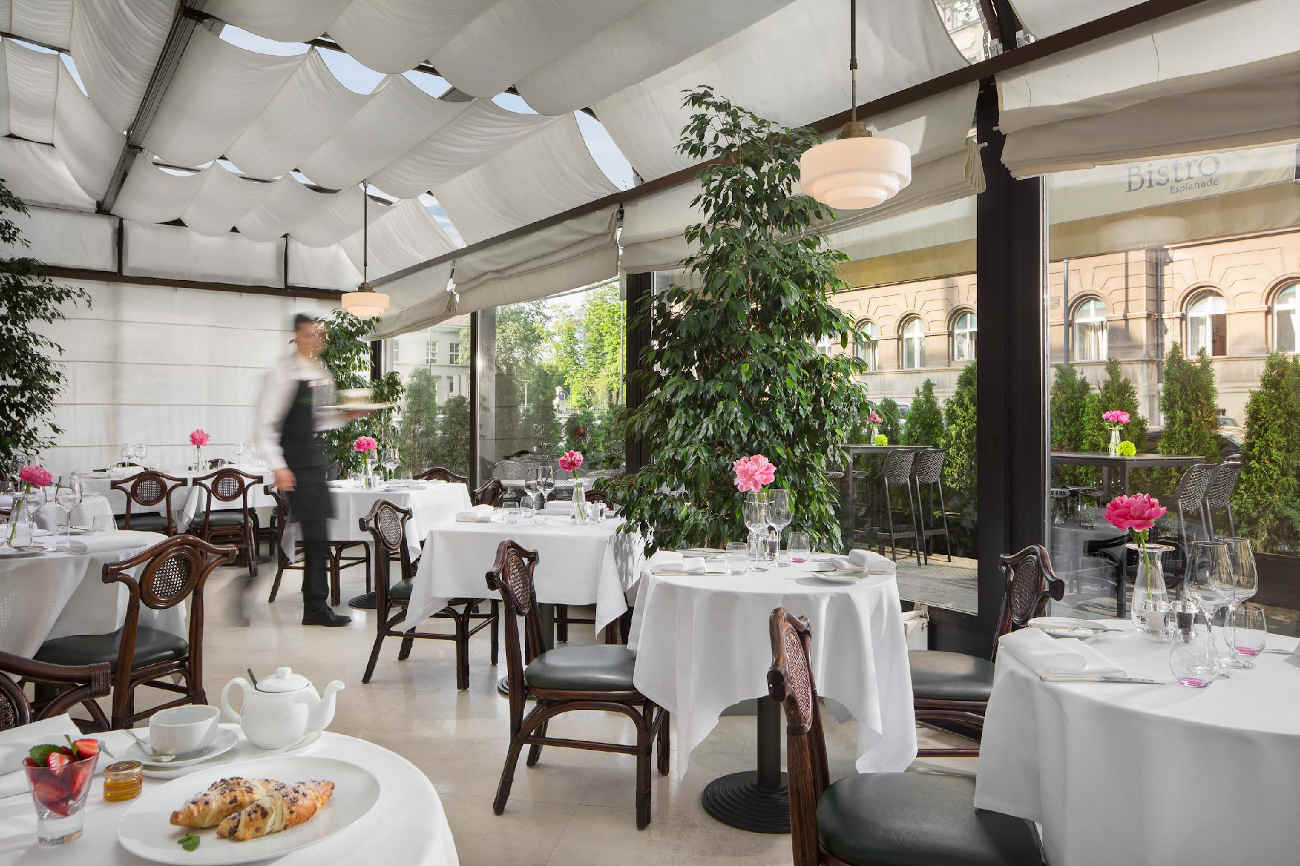 For a more informal dining experience, yet still offering the quality and expertise you would expect from a restaurant included in the Michelin Guide, Le Bistro Esplanade provides its mix of international guests and locals with a lively ambience and popular specialities such as strukli (rolls or parcels of stuffed pastry which, in this case, are served au gratin).

This typical dish, which has been on the restaurant menu since 1951, is such a mainstay of Croatian cuisine that it is included in the bistro’s menu of specialities, along with schnitzel and beef tartare. In addition, the French-inspired menu will appeal to adventurous diners with its creative combinations such as grilled foie gras served with peach jam; cod brandade, okra, herbs and crispy skin ; and Pag cheese risotto sprinkled with truffles. 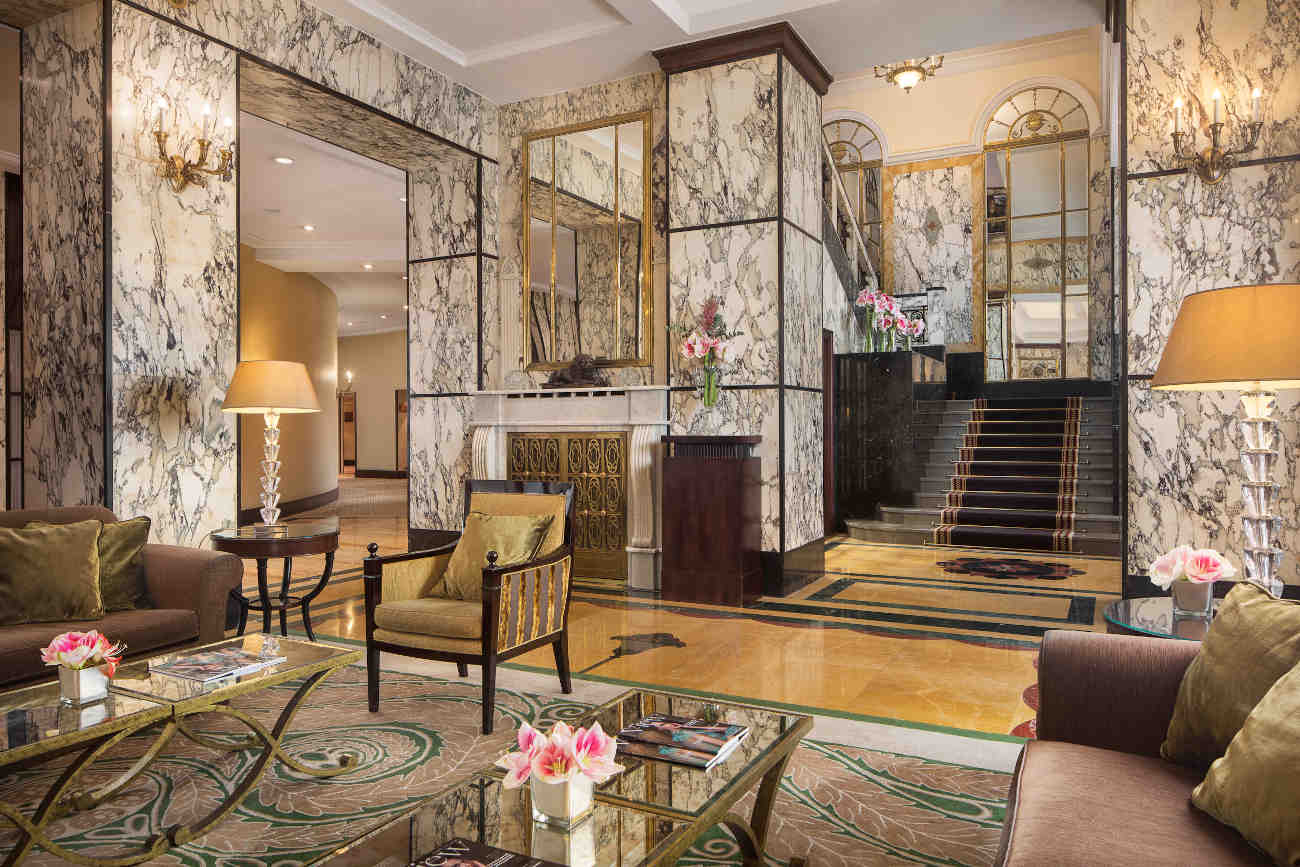 Both the Hotel Esplanade’s restaurants offer attractive culinary choices in Zagreb’s artistic quarter, an area boasting wide avenues, green spaces and monumental buildings such as the Croatian National Theatre built in 1895, the Opera House, the Mimara Museum and the railway station. Last but not least, the enviably tranquil location of this luxury hotel (which also boasts a spa and a ballroom with a beautiful domed ceiling) makes it possible to visit most of Zagreb’s famous monuments without having to call a taxi or use public transport.

After a restful night’s sleep in the comfort of soft bedlinen and goose-down pillows, guests can head out, fully refreshed, to explore the city’s highlights, which include the Bridge of Blood, the esoteric Stone Gate and the various seats of power dotted around the upper town (Gornij Grad). Having admired the Parliament and its surrounding government buildings, together with Illirian Square, the Priest’s Tower and St Mark’s Church, which dates back to the 13C, take a stroll along the famous Opaticka Street with its collection of neo-Classical and Baroque monuments, before visiting the old pharmacy (founded in 1355) in Stone Street (Kamenita Ulica).

The 5 Best Restaurants in Croatia

Where to dine in this European country.